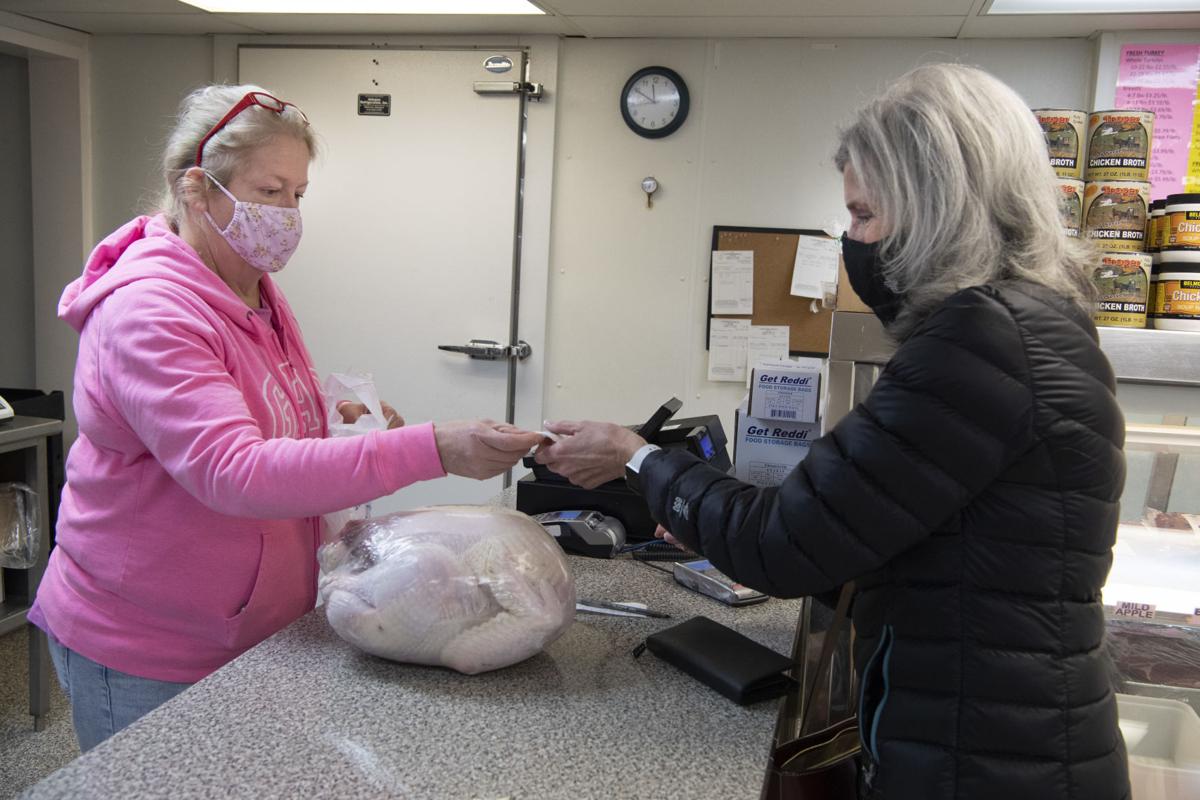 Hillside Turkey Farm’s Judi Smith, left, sells a large fresh turkey to Annette Dubas of Westminster on Friday afternoon at the shop on Elm Street in Thurmont. The family opened the turkey farm in 1939. This year the COVID -19 pandemic precautions caused a demand for smaller birds due to a decrease in family gatherings. 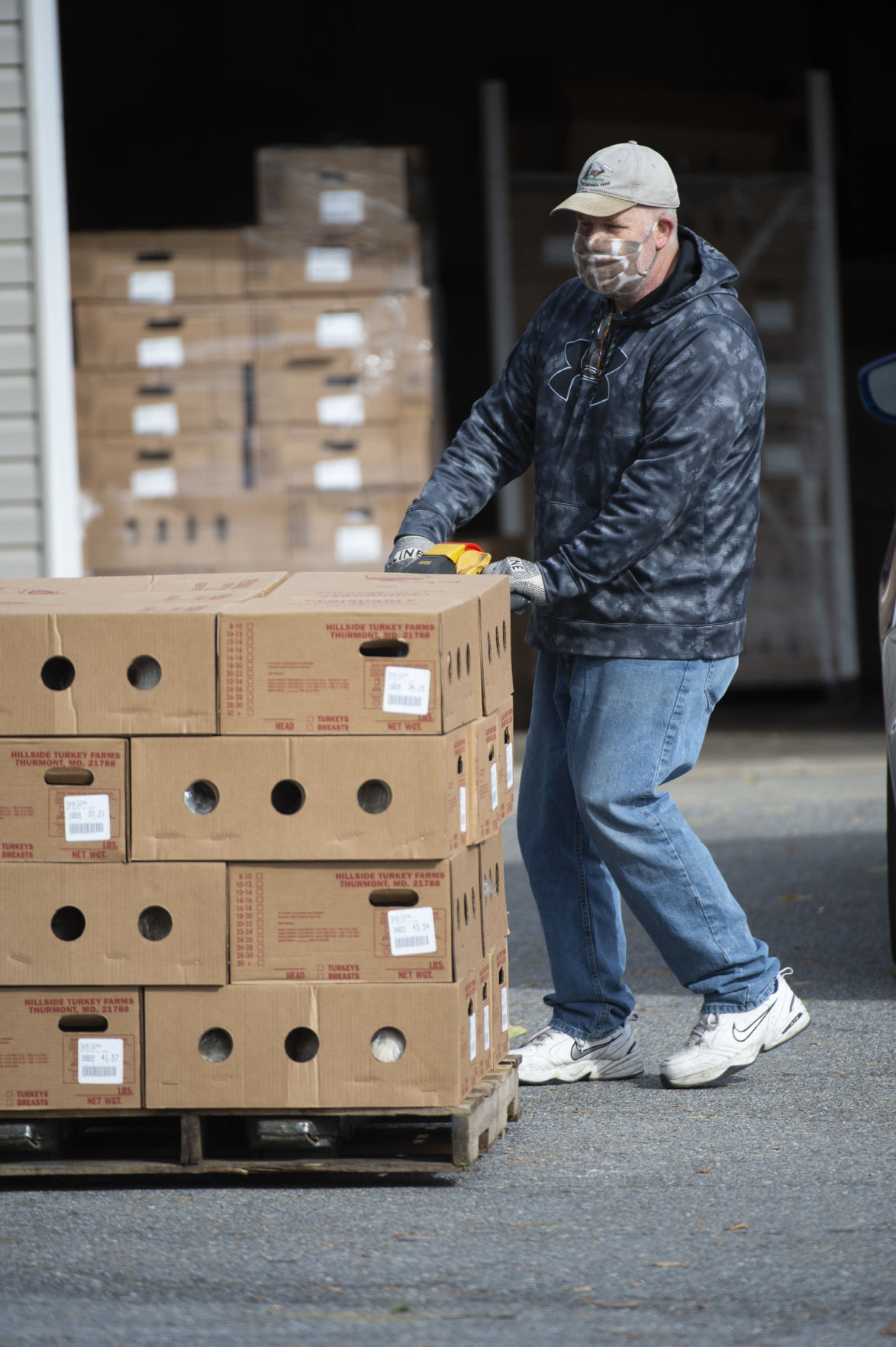 Hillside Turkey Farm’s Bryan Smith shuffles boxes of fresh turkeys on pallets that will be delivered to area markets in addition to the thousands that are sold from their retail shop in Thurmont. 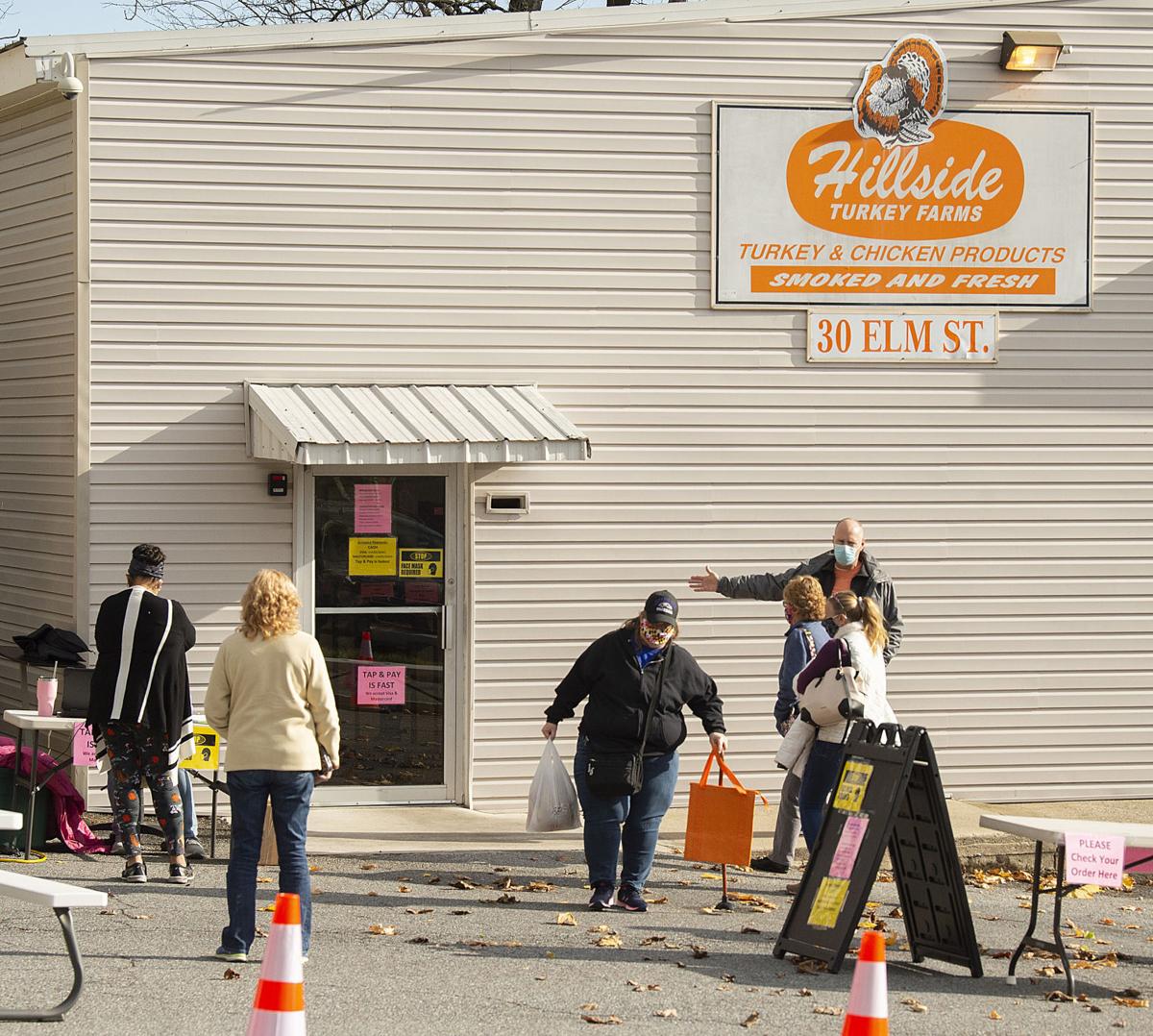 Lines began to form early Monday at Hillside Turkey Farms with those waiting to get their local fresh turkey.

Hillside Turkey Farm’s Judi Smith, left, sells a large fresh turkey to Annette Dubas of Westminster on Friday afternoon at the shop on Elm Street in Thurmont. The family opened the turkey farm in 1939. This year the COVID -19 pandemic precautions caused a demand for smaller birds due to a decrease in family gatherings.

Hillside Turkey Farm’s Bryan Smith shuffles boxes of fresh turkeys on pallets that will be delivered to area markets in addition to the thousands that are sold from their retail shop in Thurmont.

Lines began to form early Monday at Hillside Turkey Farms with those waiting to get their local fresh turkey.

This is the busiest week of the year for Hillside Turkey Farms.

Judi Smith, who runs the operation with her husband, Bryan Smith, was bundled up on Monday at a small table outside the shop on Elm Street in Thurmont, talking to customers as a line formed.

The store is small, but that hasn’t stopped people from coming in to get their Thanksgiving fixings or Hillside from adapting to COVID-19 restrictions to offer a variety of products for the big day.

And that day may look different this year, from how many people are gathered around the table to the size of the turkey that’s on it.

The Centers for Disease Control and Prevention recommends that the safest way to spend Thanksgiving is with people in your household. This could mean fewer family gatherings that require larger turkeys to feed everyone.

And even if people gather, the CDC still recommends that they bring their own food.

According to the Associated Press in late October, Kroger reported that 43 percent of shoppers were planning to have Thanksgiving with only their immediate household.

“[Kroger] has purchased more turkeys than usual — in all sizes — but it’s also predicting an increase in demand for alternatives, including ham, pork roast and seafood,” according to the AP. “Kroger also expects to see more demand for plant-based meats, like a vegan roast stuffed with mushrooms and squash.”

Similarly, AP reported that Walmart will have 30 percent more turkey breasts to sell, in addition to their whole turkeys, for people who don’t need or want an entire turkey for the big day.

At the local Common Market Co-Ops, more local, organic turkeys are being sold than in past years as there are two Common Markets available in the area, according to an email from Marketing Manager Susan Schulman.

“We’ve had pre-orders available since early this month and have noticed an uptick in requests for 10-14-pound birds, as well as [turkey] parts,” Schulman wrote. “This year we offered both organic and local breasts from two different family farms. The smaller sizes and pieces are top sellers.”

Schulman said customers “are loving” the co-op’s selection of fish and seafood, which could be an alternative to the traditional Thanksgiving turkey.

As for the volume of shoppers, Schulman said they “have noticed shoppers spread out their shopping trips more than in previous years.”

“Many shopping baskets were full of shelf-stable items the last couple of weeks, and we assume the meats will be picked up this week,” she wrote. “What we are seeing this year is a lot of business coming through our curbside service option. We use the online vendor, Mercato.”

Hillside’s farmers say they are experiencing an increased demand for smaller turkeys.

Hillside is a family farm that began in 1939. In addition to Judi and Bryan, one of their children helps them full time and is learning the ropes, while another helps out part time.

Smith added, “It’s different than other holidays because people celebrate things at different times in December … it’s probably the same amount of volume, but it’s over a four-week period.”

Because of the size of the business, there can only be so many people inside the shop at one time, which Smith said makes the process much slower. So they’ve adapted.

“We’re normally very busy at this time of year, but this year is different,” Smith said. “COVID has really affected the way we do retail business.”

This week, Smith said she’ll be outside greeting customers and sending orders in via computer.

Because of the way Hillside adapted its business to deal with COVID-19 — which included changing the website and putting a pre-order form online — people’s ordering tendencies have changed. They’re not just ordering turkeys. The pre-order form offers items ranging from beef, turkey, chicken and pork to eggs, cheese, seafood and prepared food like cornbread.

In sticking with what appears to be the nationwide trend, Hillside has also sold out of 10- to 25-pound turkeys.

“Normally, we have some turkeys left in all different size categories at this point,” she said. “The only thing I can offer at this point is a 25- to a 32-pound turkey.”

According to the U.S. Department of Agriculture Economic Research Service website, turkey meat production in the country from January through September of this year was down about a percent from last year.