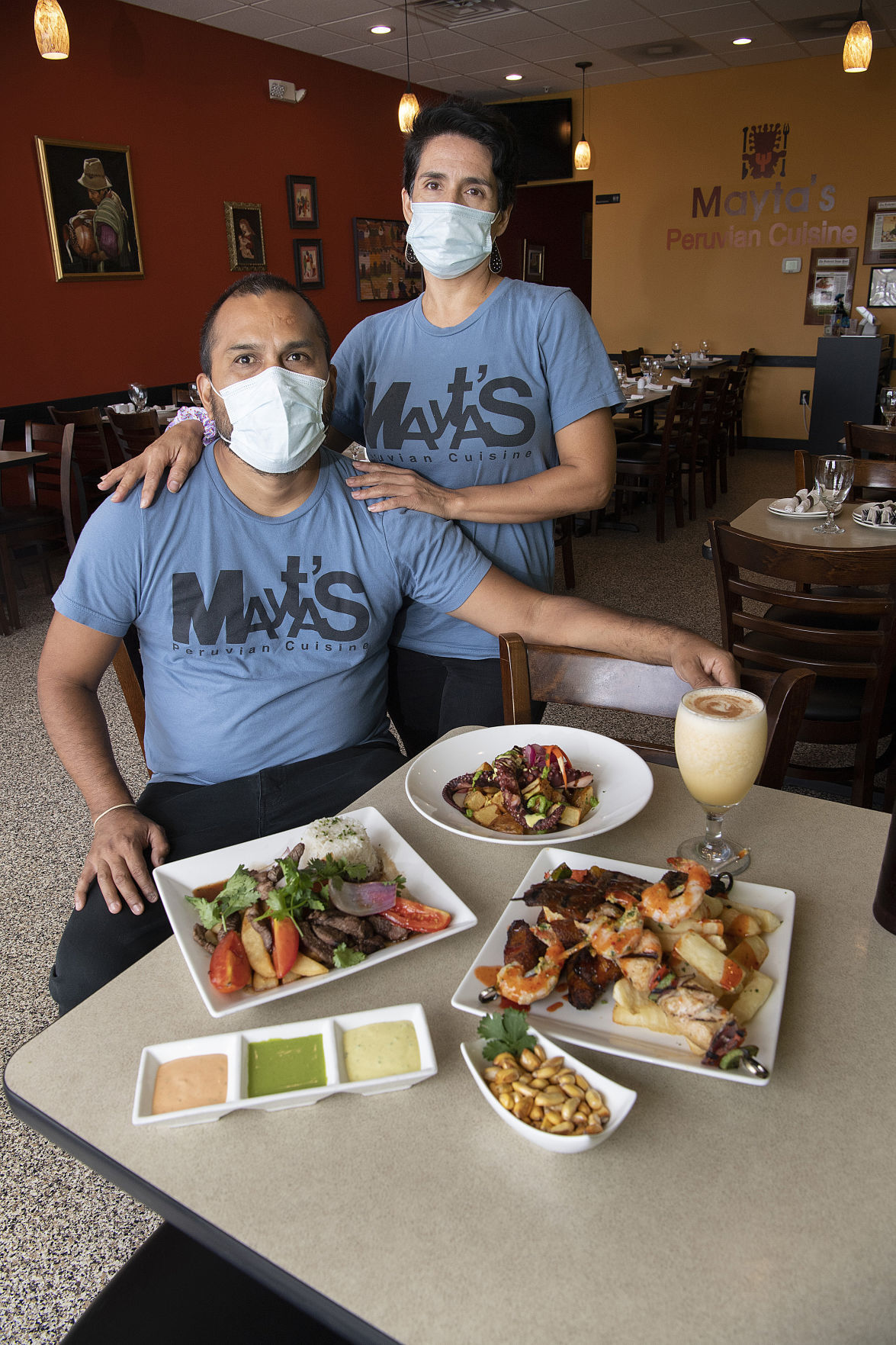 Jorge Velasquez and his wife Melissa Ortiz, owners of Mayta’s Peruvian Cuisine in the Westview Shopping Center on Buckeystown Pike, display some of their entrees in the dining room of their restaurant Friday. 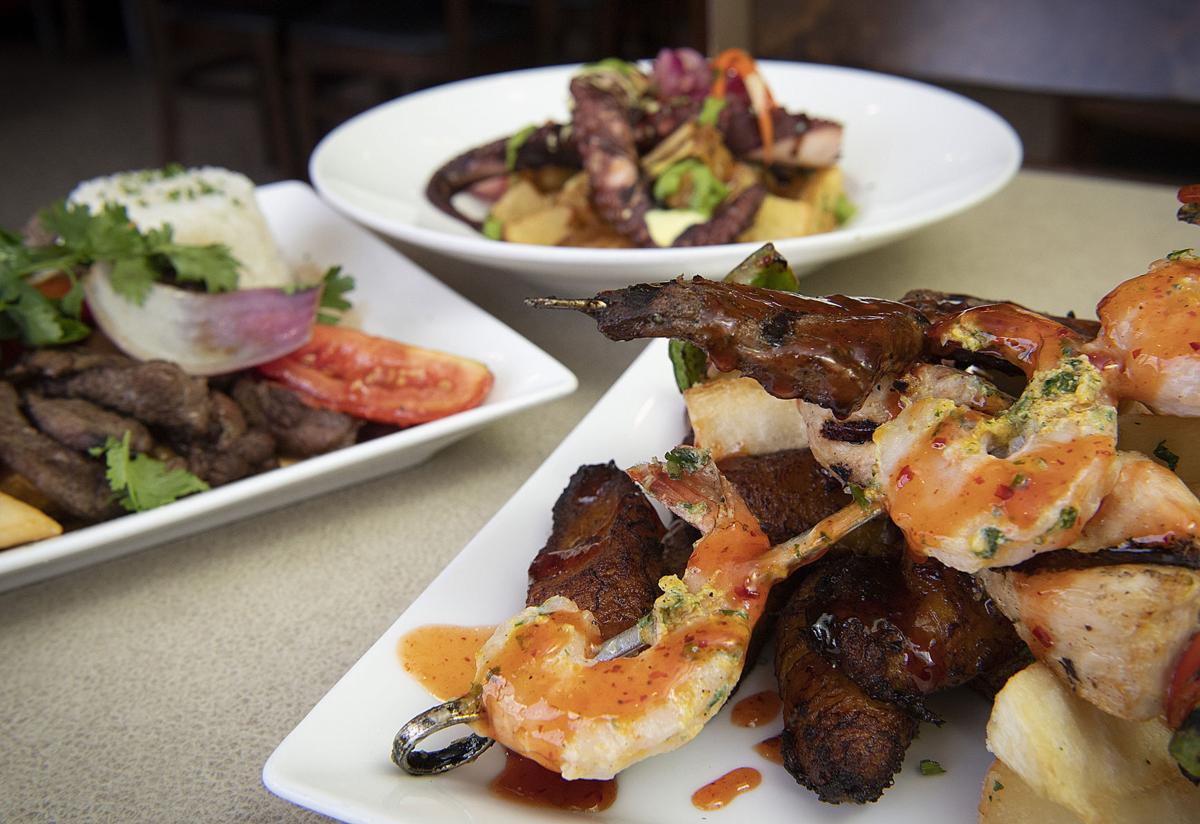 Some of the entrees at Mayta’s Peruvian Cuisine in the Westview Shopping Center on Buckeystown Pike. The restaurant has struggled due to space limitations in the dining room because of the pandemic. 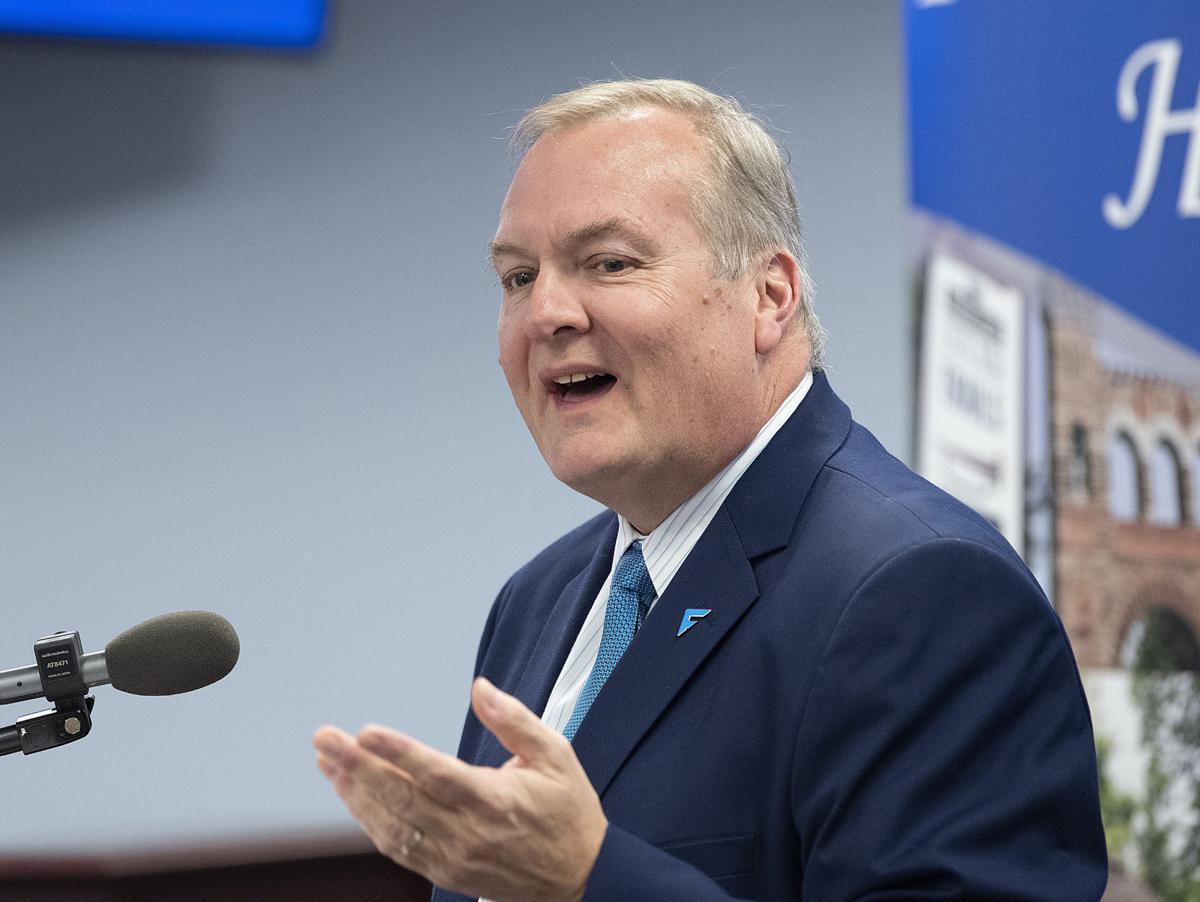 Jorge Velasquez and his wife Melissa Ortiz, owners of Mayta’s Peruvian Cuisine in the Westview Shopping Center on Buckeystown Pike, display some of their entrees in the dining room of their restaurant Friday.

Some of the entrees at Mayta’s Peruvian Cuisine in the Westview Shopping Center on Buckeystown Pike. The restaurant has struggled due to space limitations in the dining room because of the pandemic.

The COVID-19 pandemic is not exactly the best time to turn away business. But Jorge Velasquez, owner of Mayta’s Peruvian Cuisine in the Westview Shopping Center, has had to do so multiple times in recent months.

Currently allowed to operate at only 50 percent capacity, the restaurant is left with only about 20 seats indoors, and 16 outside.

“For us, for a small business, it's really killing us,” Velasquez said. “It's a very difficult time.”

The restaurant, like many small businesses, has reopened under new rules and regulations, but is still operating far from normal. With government funding long gone, and the pandemic still going, some businesses haven’t been able to get back on their feet.

On Monday, those businesses took another hit as County Executive Jan Gardner announced the county would not follow Gov. Larry Hogan's orders of increasing capacity to 75 percent for restaurants and bars.

Rick Weldon, president and chief executive officer of the Frederick County Chamber of Commerce, said that he's seen numerous businesses throughout the county close across industries, including events, entertainment, restaurants and DJ's.

The Kitchen Studio Cooking School’s physical location on Buckeystown Pike is one casualty of the pandemic. It officially closed on Aug. 31 – just one day before Gov. Larry Hogan announced they would have been able to resume in-person classes.

“I don't think it would have changed my mind. I really don't. Because we were so deep in at that point,” said Christine Van Bloem, owner of The Kitchen Studio.

The only thing that really would have made a difference, Van Bloem said, is if the government handled the pandemic in a more serious way from the start.

“Until the pandemic is put under control, people can have delusions that everything is normal, but it's not,” Van Bloem said. “… But businesses like mine are just ... I mean, we're not going to survive. People like us aren't going to survive.”

The entertainment and events industry is one field that has been particularly hard-hit by the pandemic, and one that doesn’t have many options for virtual or take-out services.

Shawn Hocherl, owner of Showtime Sound in Frederick, said his company lost several million dollars when events were no longer a possibility. What was supposed to be a peak year for touring turned into a year with a near-empty calendar.

“We were shut down first and we are going to be the last ones to open up, no matter what happens,” Hocherl said. “You're not going to fill up a 5,000-seat venue or 10,000-seat arena with people right now.”

Showtime Sound has tried to adapt by offering its studio space for livestreams and pre-recorded events. Additionally, they are providing the audio and visual for the drive-in movies at the Frederick Fairgrounds, sponsored by Troyce Gatewood and Partners.

But it would take a lot more outdoor events to bring the company back to where it was before the pandemic, Hocherl said. Since March, he’s had to lay off about a dozen full-time employees.

“We've never thought we'd have to do anything like that,” Hocherl said. “And we just kind of want to get back to work and prove that we can do events safely during this pandemic.”

Van Bloem, Velasquez and Hocherl all received some funding at both the federal and county levels. But the money isn’t enough to last for an extended period of time. And considering the Paycheck Protection Program hasn’t opened back up since August, it doesn’t look like it’s an option any business can rely on. Hocherl teamed up with other entertainment groups to lobby for government support to help save event and entertainment businesses.

“Everybody thought [it would be] probably two weeks, a month, April, maybe we'll get the summer back. But now pretty much all venues and touring have stopped until next year,” Hocherl said. “And it's hard to book … because no one knows when we'll be able to go back right now. It's just a big moving target of trying to get back on our feet.”

Restaurant profit margins are slim – usually only about 3 to 5 percent – which means slicing seating capacity also slices profits. But even if indoor capacity were to increase, not everybody is comfortable eating inside restaurants yet, or attending indoor events.

Mayta’s food truck has actually been doing better than the restaurant most days, especially when they can set up at a winery on Saturdays and Sundays, or at Baker Park on Fridays.

But what’s going to happen when the weather turns colder? Velasquez said he has already had to turn people away from the restaurant some nights because all of their seating is full. When the outdoor patio has to be closed due to the weather, they’ll be left with only a percentage of seating inside. And those who prefer to only dine outdoors during the pandemic might not come back either way.

“I cross my fingers that maybe in a few months the governor says we're allowed to use 100 percent capacity of the restaurant,” Velasquez said regarding the loss of the patio. “… Otherwise, we'd go back [to] only carryout.”

“So if we could reopen, how many people would actually come?” Van Bloem said.

Ultimately, the decision Van Bloem made came down to re-signing her lease, which was up at the end of July. Her landlord, with whom she said she had a good professional working relationship, set the term of the lease to be several years, which they had never done before.

Van Bloem said she’s sad that she’s had to close her physical location after 15 years in business. And while the wound is still fresh, she doesn’t want to wallow in it – she wants to work on her online classes and then reconsider a physical location sometime in the spring.

But she does think something needs to change.

“We have had tremendous support from the county and from the public, and we're so deeply grateful for the support that we've had,” Van Bloem said. “But if the folks up top don't get control of this, more small businesses are going to close.”

Mayta's has delicious food. We will make a point to tell others about your restaurant. Hang in there. We love the ethnic diversity of food options in Frederick. We appreciate your hard work and bringing a unique style of food to Frederick.

Do they serve Cuy?

I've been out to eat several tims in the last few weeks. I haven't had to wait for a table. I think the problem isn't the restrictions, it's the fact that people are still afraid of the virus. We need to get it under control. I have also been to small businesses with limited entry and not had to wait to get in.

I thought hogan opened up to 75%...didn’t see Frederick limit it like other counties originally listed. It has to be a hard time either way.