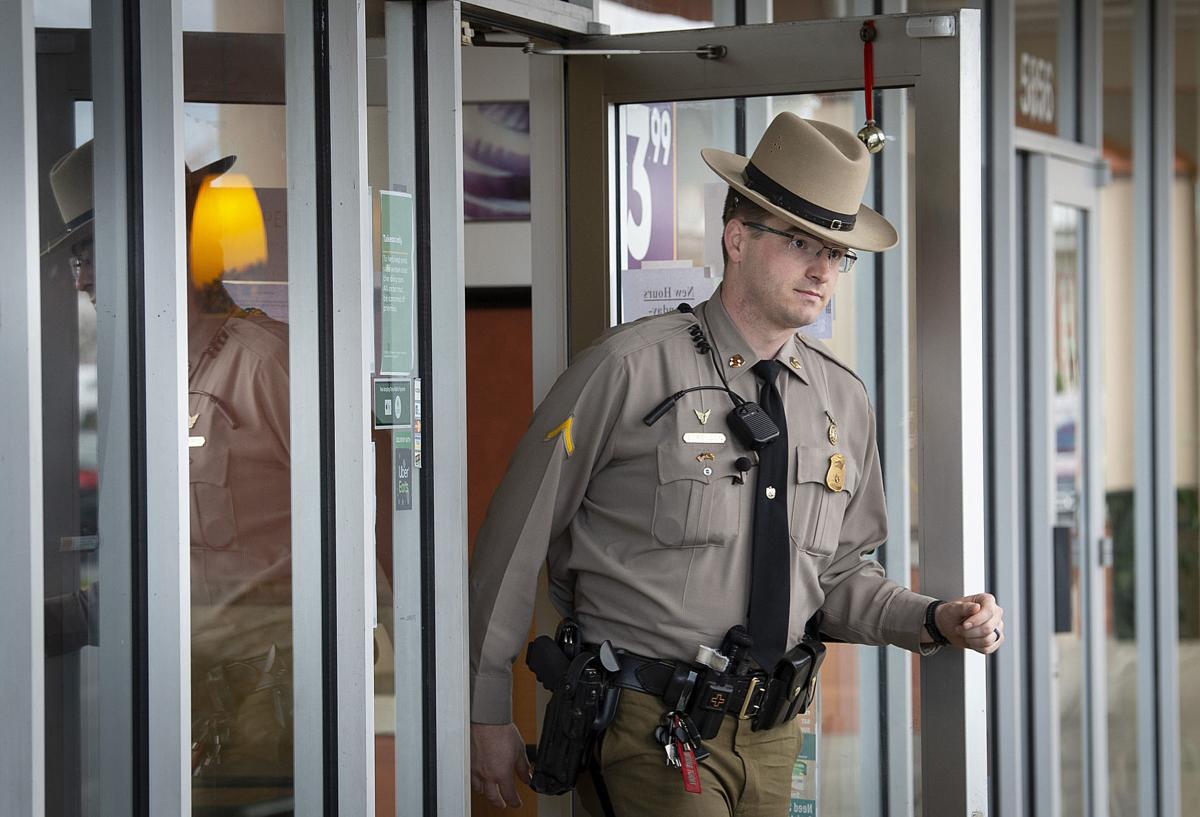 Maryland State Police Trooper First Class Josh Sorenson checks in with businesses in a Ballenger Creek Pike shopping center Monday afternoon. MSP has been visiting businesses for the past week in the county to insure that Gov. Hogan’s executive orders are being observed such as restaurant carry-out only restrictions and not having more than 10 people in one location in other types of establishments. 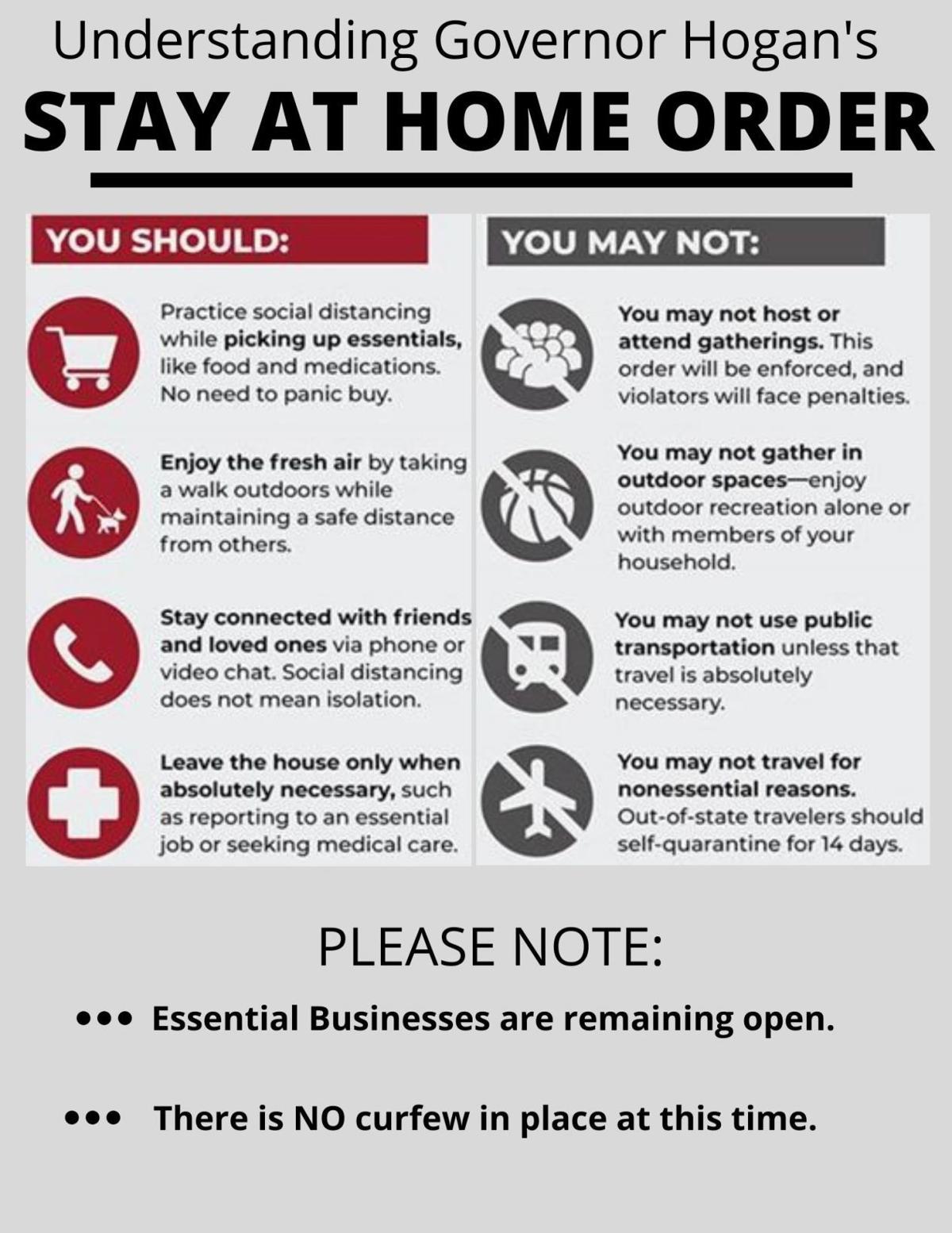 Maryland State Police Trooper First Class Josh Sorenson checks in with businesses in a Ballenger Creek Pike shopping center Monday afternoon. MSP has been visiting businesses for the past week in the county to insure that Gov. Hogan’s executive orders are being observed such as restaurant carry-out only restrictions and not having more than 10 people in one location in other types of establishments.

“I was walking around yesterday after the announcement and people were saying things like, ‘Oh, I’ve got to pick up some cigarettes,’ or ‘I have to get supplies now before the curfew goes into effect at 8 o’clock,’” Sommers said. “There is no curfew, but that’s what people’s fear is, that, if they’re out past 8 o’clock they’ll be arrested. No.”

The order, the latest step taken by the governor to try to slow the spread of the novel coronavirus, is intended to ensure people refrain from leaving their homes if necessary, but there are many exemptions and caveats to the order, Sommers said. For example, people with essential jobs are free to commute to and from work, residents can still go grocery shopping, shop for pet or livestock care products. Doctor’s appointments and picking up essential medicine or prescriptions were also exempt, according to the order.

Taking walks or exercising outside were still allowed under the order, with the only caveat being a recommendation from state health officials to restrict engaging in such activity only with members of the same household. The ban on gatherings of more than 10 people also remained in effect.

“I would encourage people to go and actually read the governor’s executive order that was issued yesterday, because in there it explicitly states who’s exempt and what isn’t … On page three of that other, there is a host of exemptions to what people can leave the house for,” Sommers said.

A better understanding of the law would also help with a flood of calls that Frederick police and other law enforcement agencies have received since Monday’s order went into effect at 8 p.m. that evening, the captain said.

“[The callers] think everybody is in violation of the order, but for all of these calls we’ve gotten for people who are supposedly not in compliance, I don’t think we’ve substantiated any of them,” Sommers said.

Perhaps due to the widespread misconceptions about the order, many members of the public aren’t on the same page as police departments and other law enforcement agencies tasked with ensuring the order is followed.

If law enforcement officers find someone has deliberately failed to comply with the stay-at-home order, such as leaving their home for a non-essential, non-exempt reason, or attend an event or other gathering banned by the governor’s previous order, police can charge that person with a misdemeanor offense punishable upon conviction by a jail sentence of up to a year or a $5,000 fine or both, according to the order. With that being said, both Frederick police officers and local state troopers were given explicit instructions on enforcement of the order.

“Troopers will not make traffic stops simply to ask drivers where they are going to determine if their travel is essential or not,” a Maryland State Police press release issued Tuesday reads in part. “If, in the course of the regular performance of his [or] her duties, such as during a crash investigation or a traffic stop, the trooper develops information indicating the individual was engaged in non-essential travel, enforcement action can be taken, in consultation with the state’s attorney’s office in that jurisdiction.”

Both Sommers and Sheriff Chuck Jenkins expressed similar sentiments, saying police and deputies were not roaming around the county looking for people to charge with violating the order.

“Our deputies are not going to making traffic stops solely to determine why a person is out and we’re not going to require documentation for a person’s reason for travelling, “ Jenkins said when reached for comment. “I can say if we respond to a crash or have a specific reason to stop a vehicle we may ask, but I think that some people have the impression that this [order] means some kind of martial law. It does not.”

While not every resident was on the same page with law enforcement, Jenkins said he was confident all area law enforcement agencies were. Local police agencies held several meetings over the last few weeks to ensure their response to such developments as the governor’s most recent order was unified.

Sommers emphasized that, while officers and deputies will still respond to calls for service and enforce the law, the safety of the public was foremost on everyone’s minds.

“We’re all in this together, and I think it’s important for people to know that … we’re not heavy-handed when we’re going out and interacting with members of our communities,” Sommers said. “We’re here to provide solutions to problems and education to help our community get through this, together.”

Is visiting your boyfriend essential? Our neighbor, with whom we share a wall, has had many raucous girlfriends through the months. The current flame is pretty quiet, compared to a few that were very enthusiastic to be in his company, at 2 am etc. Anyhow, his girlfriend is over, and she doesn’t live with him. So, is a booty call necessary? Is he not taking this seriously enough, or am I taking it too seriously? Mildly annoyed, but not surprised given past behaviors-

Is just going for a drive, like going to gravesite, and getting fresh air considered non essential, should I be involved in accident, I will be ticketed?

If you are responsilble for the accident you will probably get a ticket. Now when the Police ask where you were traveling to and you tell the to a gravesite, that is not essential . You will be ticketed for disobeying a Governor's order. Reason being that the person in the grave will still be there in a couple of months when the crisis subsides. And to get some fresh air, go for a walk.

Visiting a grave probably gives no comfort for the deceased - depending upon your beliefs - but a cemetery might be a good place for an exercise walk. Go for it. The cops have bigger fish to fry - such as a perp sticking up the Safeway in Middletown.

Out and about taking pictures for a newspaper is "essential?"

IT’s totally nuts. And people are so sure they are right.

Is getting a haircut essential? I don’t want my hair to grow so long that I have to make a man bun...

Become a Dudist. The Dude abides.

Is your barber still working?

Mullets are comin back....

When is BWI going to be closed. With the stay at home order it is non essential and the worse place possible for passing the Corona virus. You sit in a packed waiting room and packed on a plane with 2 or 3 people within arms length. Close it down!

Ten people, per average, in those planes that are still taking off.

So, there's no need them.

It is, I had to drop a friend/coworker off there yesterday for essential travel (she works for FEMA). Nooooooobody was there, at least at the arrival drop off zone. Nada, nothing, zip, zililch.

There are still critical people traveling Dick, not to mention that a lot of packages and shipments are done in the holds of passenger airlines, including the US mail.

you should get out more DickD, you are oblivious of whats going on outside.

There are hundreds of policemen in MD under quarantine.

Give all the tickets you want. No judge will fine or jail you for exercising Constitutional rights. And that doesn't mean that you should do anything stupid and do anything not necessary.

As long as some activist judge doesn't try to make an example of you. And I agree, don't try to do anything stupid. I got out yesterday for a run to the grocery store and it was interesting to watch people wearing all sorts of gloves and face masks - I even saw one guy with a dust mask down around his chin and wearing cotton gloves.

An appeal will overturn an activist judge. Then comes the law suits.

I must have missed the part of the story that said you wouget a ticket for exercising.