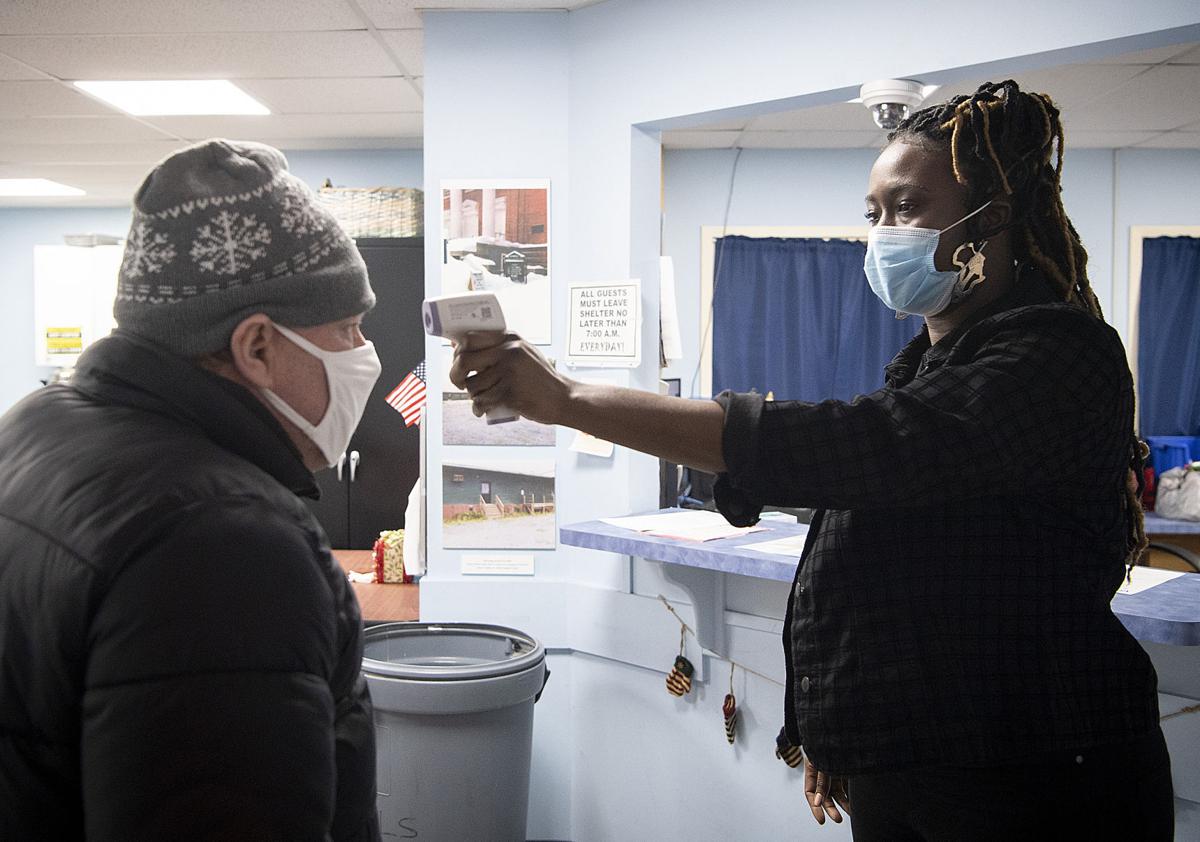 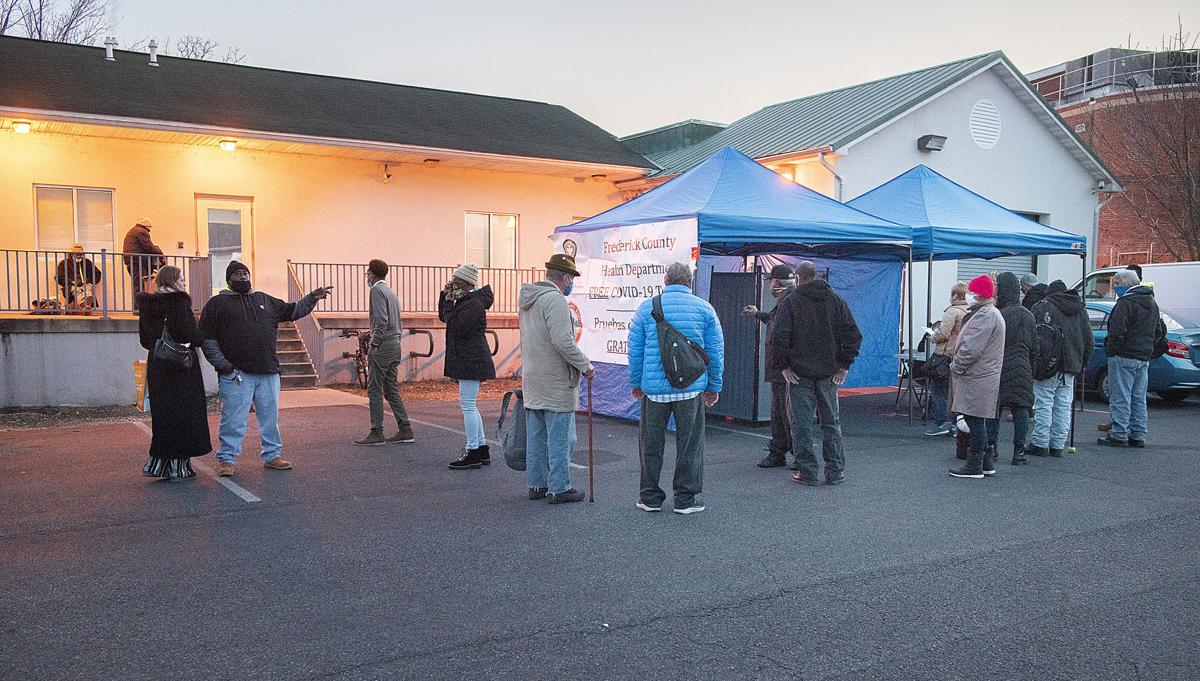 A line forms as staff from the Frederick County Health Department provide COVID-19 test to the staff and clients of the Alan P. Linton, Jr. Emergency Shelter Thursday afternoon. 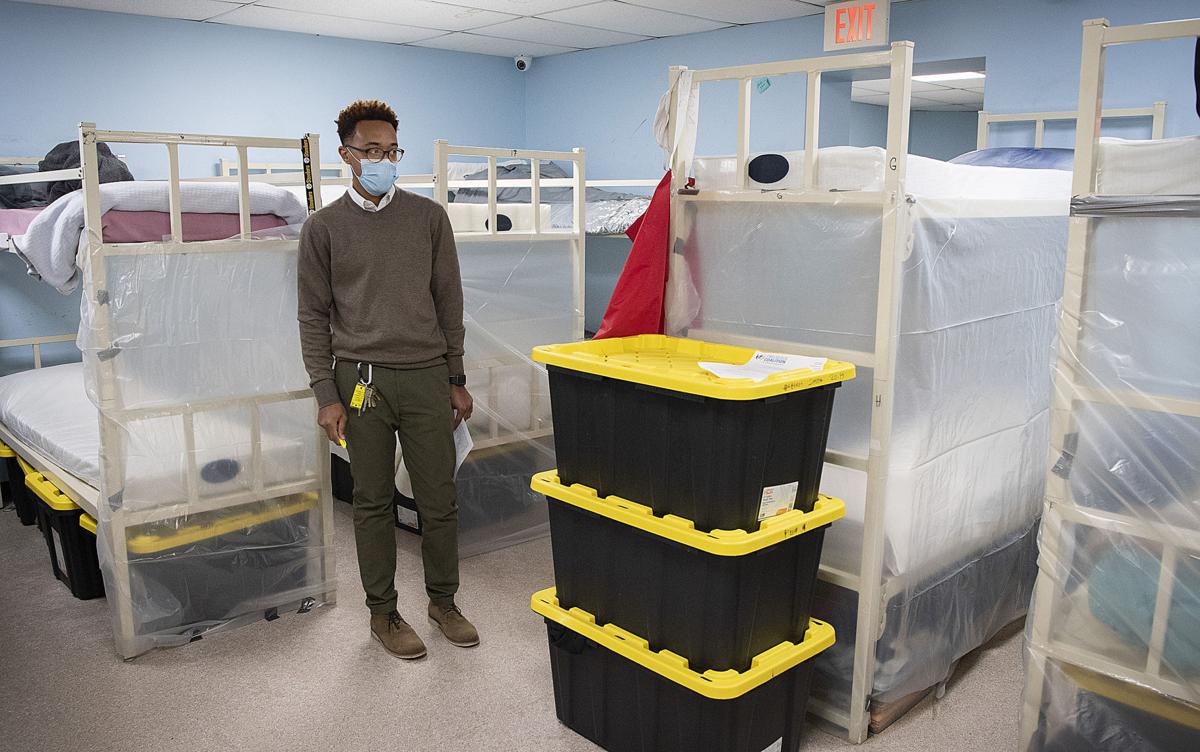 Kavonte Duckett, director of the Alan P. Linton, Jr. Emergency Shelter, shows the plastic sheeting that has been wrapped around bunks to protect clients from each other. Only the bottom beds of the bunks are being used by the roughly 45 clients that are staying at the DeGrange Street facility.

A line forms as staff from the Frederick County Health Department provide COVID-19 test to the staff and clients of the Alan P. Linton, Jr. Emergency Shelter Thursday afternoon.

Kavonte Duckett, director of the Alan P. Linton, Jr. Emergency Shelter, shows the plastic sheeting that has been wrapped around bunks to protect clients from each other. Only the bottom beds of the bunks are being used by the roughly 45 clients that are staying at the DeGrange Street facility.

For months now, Nick Brown at the Religious Coalition for Emergency Human Needs has been preparing for the “what ifs” that naturally arise when running shelter programs during a global pandemic.

Normally, as cold weather approaches each year, shelters such as the one run by the Religious Coalition aim to provide a warm, safe place for those in Frederick County that have nowhere else to go.

But this is far from a normal year. Brown knew there would be a number of possible scenarios, but one that they prepared for -- and hoped would never come -- was put into action earlier this week when someone at the shelter tested positive for COVID-19.

"The plan now is to have the resident body full tested," Brown said. "This is just to be hyper-cautious that ... no one else has been affected."

The Religious Coalition for Emergency Human Needs operates two emergency shelter programs, one for adults experiencing homelessness and one for families with children who are experiencing homelessness. The shelter for adults, the Alan P. Linton, Jr. Emergency Shelter, operates year round and is an 88-bed, open air facility that offers a safe place to sleep, shower and do laundry.

After the positive test, they are holding off on doing any new admissions for a couple of days so everyone in the population can be tested. Potential new admissions can be addressed in a couple of ways, including placing them in a hotel if needed.

They're also shifting around the setup within the facility.

"There's a male dorm and a female dorm," he said. "What we're going to likely do is to get the remaining female population ... transitioned into hotel rooms, and then we're going to prep the female area for a sick area if we need it."

After the person at the shelter tested positive, the coalition met with a team from the Frederick County Health Department to discuss testing for everyone in the population.

Dr. Barbara Brookmyer, the county’s health officer, said if someone in a large, close contact population such as a group shelter tests positive for COVID-19, the ensuing process should be similar to what would happen in a family situation in any household or residential setting -- meaning they should isolate.

Brookmyer explained that when a residential facility like a shelter identifies someone with symptoms, they reach out to the liaison from the health department to review what their mitigation plan.

As for the difficulties that organizations like shelters face as they work to provide essential services to community members, Brookmyer conceded it's a challenge, noting people aren't able to sleep in their individual room.

But these challenges aren’t unique to a shelter situation, Brookmyer said. People in residential households face similar potential for spread to occur in shared bedrooms or recreation areas.

“When a congregate living facility notifies us or when we learn of their having somebody who’s ill … then we discuss with them what their plan is for testing, and then also for determining who else may have been in close, prolonged contact with the individual looking back 48 hours prior to their symptom onset,” she said.

Despite the hardships brought on by the pandemic, Brown said the emergency shelter is not currently seeing an increased demand for services.

“We have not seen a huge push of folks that we’ve had to turn away from the shelter, and that’s something that’s very important to us … We keep an eye on that on a regular basis,” he said.

But one hurdle this year is that the shelter won't be able to partner with the Frederick Rescue Mission to house some of the coalition's overflow residents. That's because of the increased risk of virus transmission.

“What we’ve done instead -- we have been since early March -- [is] placing anywhere from 40 to 50 of our shelter residents in local hotels,” Brown said.

This will leave about 35 to 45 people in the Linton shelter, pending any further changes, he added.

Arnold Farlow, executive director of the Frederick Rescue Mission, said the need for services has fluctuated throughout the year.

At Faith House, Farlow said they’re currently at their full capacity, while the residential recovery program for men has about 20 residents, which is less than what they would typically have this time of year. New intakes stay in a quarantine area until they receive a negative test.

As for providing overflow for the coalition, Farlow said this year it was simply a matter of safety. “Our residents are our No. 1 priority,” he said.

In March, Brown said that “while there are emergency management measures in place for the whole county, the homeless population has not been accounted for, at least in relation to the COVID-19 virus.”

Volunteers are still allowed to serve with the mission, but they are screened very carefully, Brown said.

In terms of PPE, the coalition was able to get masks and hand sanitizer from local distilleries and other groups.

The leaders of both the Rescue Mission and the Religious Coalition said the community has been instrumental in helping their organizations fulfill their mission.

“One thing that’s really been a tremendous asset is how everybody in Frederick collaborates and communicates and cooperates,” Brown said. “We’ve never been low on supplies.”

The Religious Coalition isn’t as publicly accessible as it was pre-pandemic, but it has still added a host of services, including COVID emergency rental assistance and an online portal.

“There’s a lot of things that we can learn from this year that we can adapt into services going forward,” Brown said.

Farlow echoed how wonderful Frederick's nonprofit community has been in 2020.

“Everybody works in their own field,” he said. “But everybody looks after each other too.”

Great work by many people. Although The woman taking the guys temp needs to have him move his hat off his forehead.

Remarkable work by caring people. Tis a shame this article does not have 50 comments or 50 thumbs up.