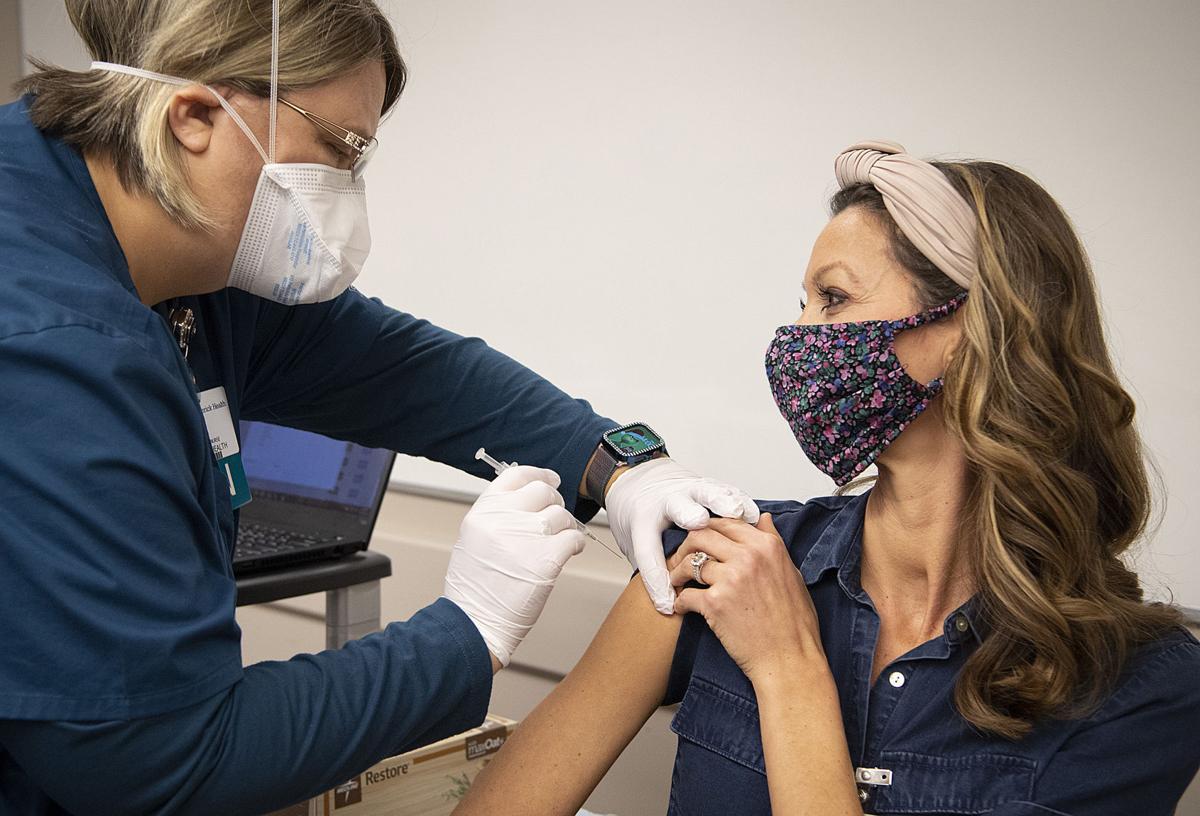 Lisa Marchesani, the employee health nurse at Frederick Health Hospital, injects Frederick County’s first shot of the COVID-19 vaccine from pharmaceutical giant Pfizer into the upper right arm of a fellow hospital employee. The first recipient of the vaccine in the county was Dr. Morgan Baker, who runs the dental clinic at the hospital. 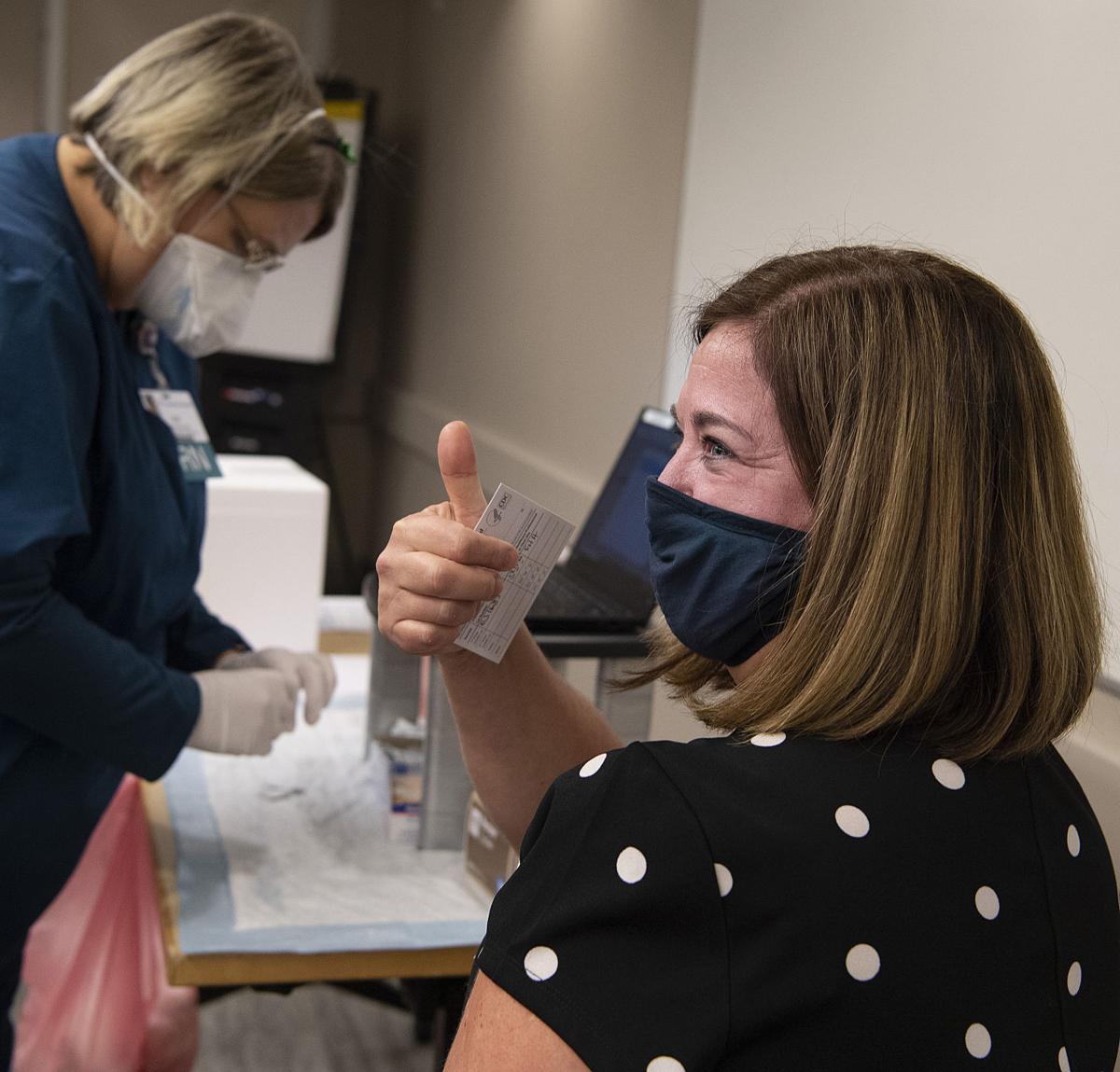 Frederick Health Hospital registered nurse Diana McFarland gives a thumbs- up to those in the room at the hospital as Frederick County’s first shot of the COVID-19 vaccine from pharmaceutical giant Pfizer was injected into the upper right arm of a fellow hospital employee. 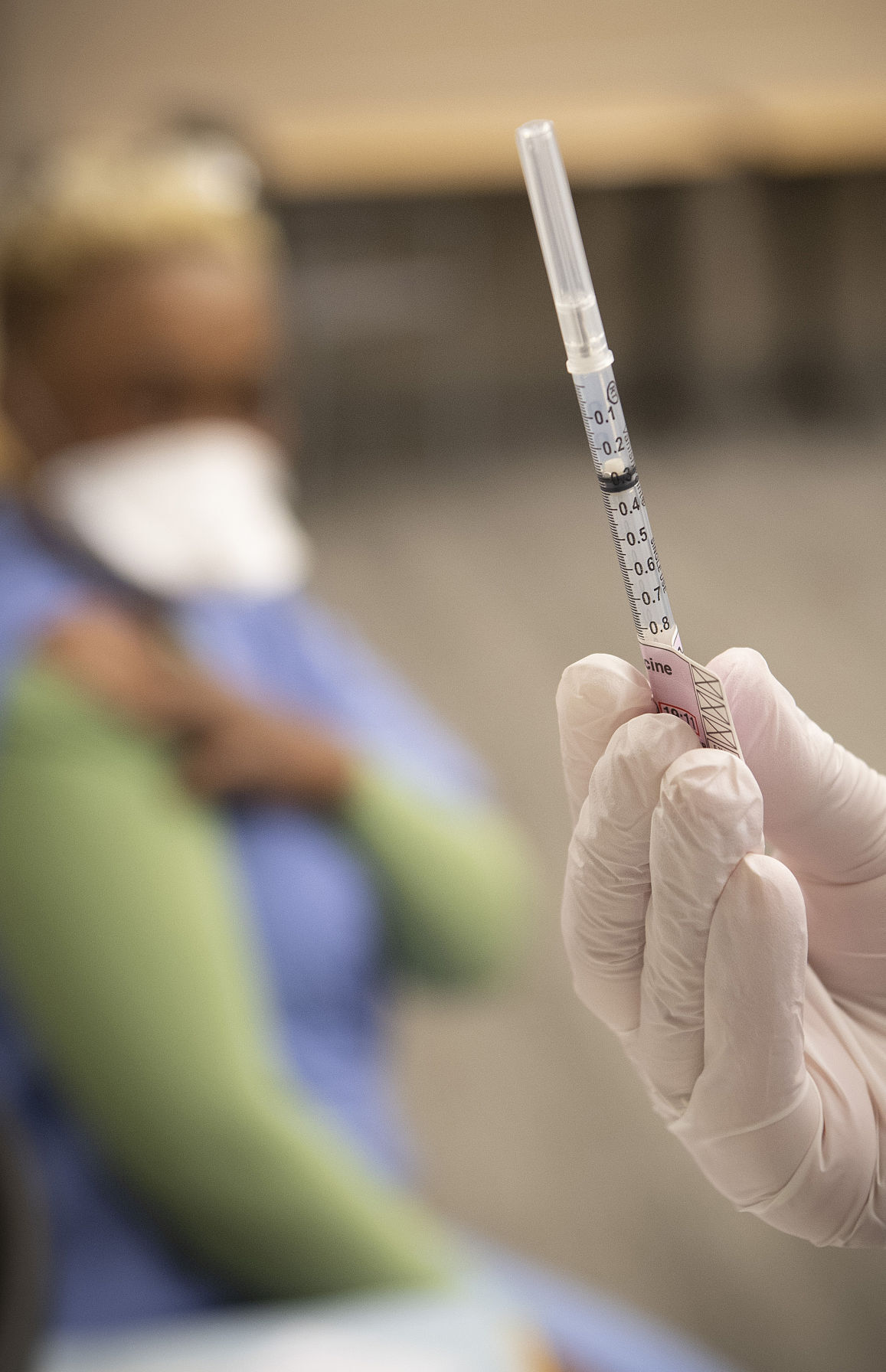 A syringe containing COVID-19 vaccine is prepared to be delivered to a health care worker at Frederick Health Hospital Thursday. 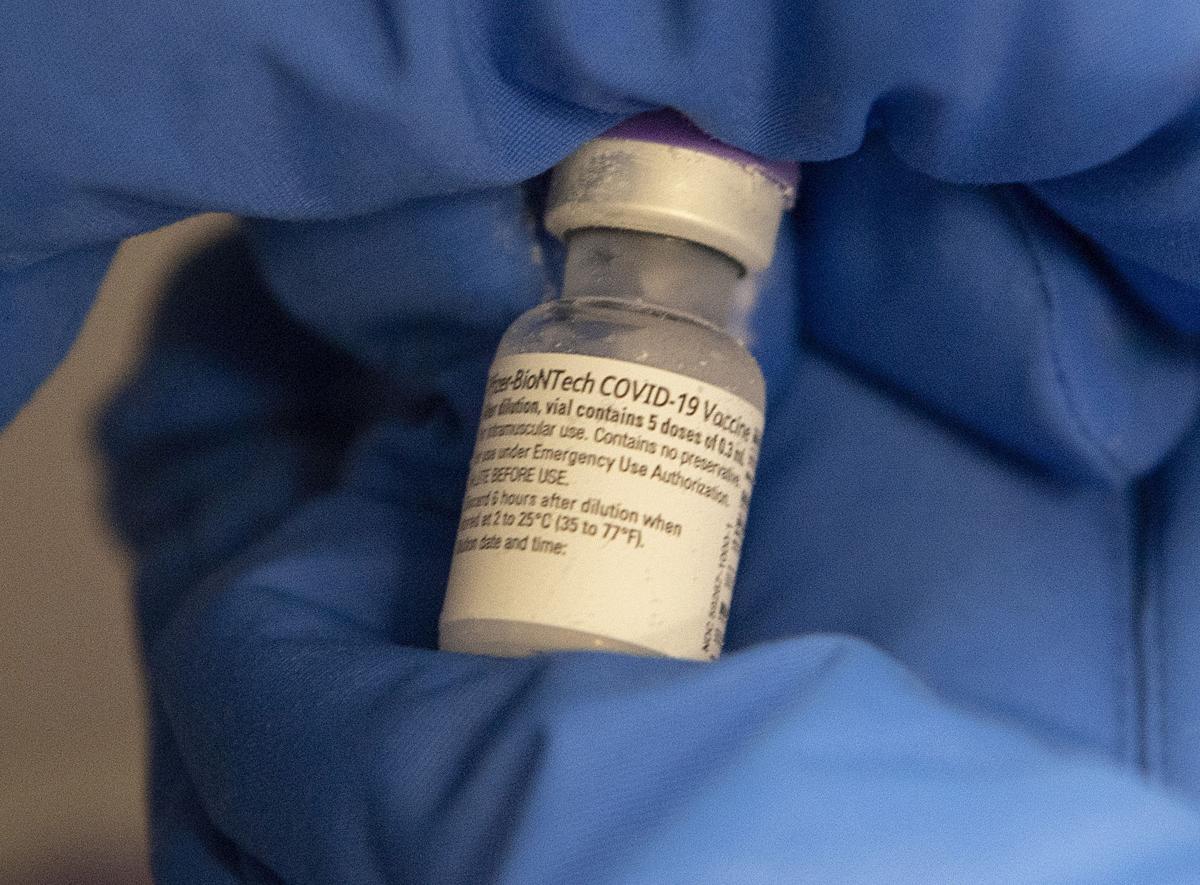 Lisa Marchesani, the employee health nurse at Frederick Health Hospital, injects Frederick County’s first shot of the COVID-19 vaccine from pharmaceutical giant Pfizer into the upper right arm of a fellow hospital employee. The first recipient of the vaccine in the county was Dr. Morgan Baker, who runs the dental clinic at the hospital.

Frederick Health Hospital registered nurse Diana McFarland gives a thumbs- up to those in the room at the hospital as Frederick County’s first shot of the COVID-19 vaccine from pharmaceutical giant Pfizer was injected into the upper right arm of a fellow hospital employee.

A syringe containing COVID-19 vaccine is prepared to be delivered to a health care worker at Frederick Health Hospital Thursday.

Wielding in her right hand the best weapon yet to fight the novel coronavirus, Lisa Marchesani felt nervous.

Marchesani, the employee health nurse at Frederick Health Hospital, has been administering shots for 32 years, but never one with this type of fanfare.

“I don’t have cameras watching me while I am giving shots all of the time,” she said. “I know how to do my job. I just don’t like it when people are [hovering]. I am more of a behind-the-scenes kind of gal.”

But, just after 2 p.m. Thursday, Marchesani was front and center as she delivered Frederick County’s first shot of the COVID-19 vaccine from pharmaceutical giant Pfizer into the upper right arm of a fellow hospital employee.

“It’s pretty cool,” said Marchesani, who was assigned the task by her manager.

The first recipient of the vaccine in the county was Dr. Morgan Baker, who runs the dental clinic at the hospital and is typically the one delivering shots — of anesthesia — to her patients.

“I am grateful. That’s the first word I can think of,” Baker said. “I would have never imagined [being the first].”

The first doses of the vaccine in Frederick County were administered on a day the Maryland Department of Health reported 2,217 new COVID-19 infections and 49 related deaths. That includes 160 new cases and no new deaths in Frederick County.

As a massive effort gets underway to vaccinate Maryland residents against COVID-19 — one that Gov. Larry Hogan described earlier in the week in historic terms — Baker was one of 20 Frederick Health Hospital employees to receive the first dose of the two-shot vaccine from Pfizer on Thursday.

The booster shot is supposed to be administered three weeks later, and FHH officials have said the hospital will have enough supply to administer the second dose.

Elected leaders, Hogan included, and public health experts have warned it could take months before the vaccine is available to the general public.

The first in line to receive it, according to guidance from the Center for Disease Control and Prevention that Maryland is following, are frontline health care workers and the staff and residents of nursing homes.

It will take almost a million doses just to inoculate them before the rollout could move to the next phase, which will include first responders, such as police, firefighters and EMTs, as well as educators and childcare providers, according to Dr. Jinlene Chan, the acting deputy secretary for public health at the Maryland Department of Health.

The first batch of the Pfizer vaccine that Maryland received as part of the federal government’s Operation Warp Speed had 155,000 doses, of which 975 went to Frederick Health Hospital.

Production of the vaccine, much like testing, will ramp up over time, and Maryland could receive up to 300,000 doses by the end of the year, according to state officials.

Frederick Health Hospital expects to receive regular shipments of vaccine from the federal government in the days, weeks and months ahead. But the hospital is presently unsure how often shipments will arrive and how many doses will be included in each.

“It’s going to take distribution to millions of people around the country over the next four or five months before [the vaccine] really begins to have an impact,” said Tom Kleinhanzl, the president and CEO at Frederick Health Hospital. “We are going to be in the game of wearing a mask and socially distancing — even those of us that have the vaccine — for a while.”

Kleinhazl said the hospital expects to be administering “dozens if not hundreds” of vaccines per day during the initial rollout.

“I guess I would call this a soft launch this afternoon,” he said at Thursday’s event.

Heather Miller, an intensive care nurse at Frederick Health Hospital who has been on the front lines of the coronavirus battle since the start of the pandemic, was the second person to get inoculated in the county.

She welcomed the additional weapon in the intense, months-long battle to keep people from dying from the virus.

“There are nurses in the ICU and everywhere who don’t want [the vaccine], who are scared of it. ‘What’s going to happen?’” Miller said. “That’s why I decided to get it. If I can do it, I’ll be there with you when you do it. You don’t have to be afraid.”

Earlier in the day, shortly after 8 a.m., the FedEx truck pulled up to the loading dock at Frederick Health with the county’s first shipment of the vaccine, according to Dr. Cherryl Peterson, the hospital’s director of pharmacy.

It was shipped from Kalamazoo, Michigan, in ultra-cold shipping containers from Pfizer, Peterson said. The vaccine has to be stored at temperatures between minus-75 and minus-112 degrees Fahrenheit.

Once unloaded from the FedEx truck, the containers of vaccine arrived at the hospital pharmacy around 8:20 a.m. so the process of thawing and administering it could begin, according to Peterson.

“The vaccine is thawed either at room temperature for 30 minutes or at normal refrigeration for 3 hours,” she said. “Once it is diluted, the end product must be used or discarded within 6 hours of dilution.”

A few hours after vaccinations began at FHH, a Food and Drug Administration advisory panel granted approval to a second coronavirus vaccine that places it on the brink of being authorized by the government body for emergency use.

This vaccine, from the drug manufacturer Moderna, should make it easier for the federal government to ramp up supply for states and local municipalities. The Moderna vaccine doesn’t have to be shipped at extreme cold temperatures.

“After 10 months of consistent focus on just taking great care of patients in our community, to get to this point in the journey feels ... I am optimistic that we are moving toward another phase of this that has a better outcome,” Kleinhazl said.

Survey: More than half of county residents want vaccine

More than half of Frederick County residents are willing to get the coronavirus vaccine, according to a survey conducted by the county health …

I can see other employers making it mandatory as well. Why should they be on the hook for sick days or workers comp claims if someone who refused to get vaccinated gets Covid?

Yah, not sure why it should not be required for certain jobs, just as several vaccines are generally required to attend public schools.

Exactly bosco. Theirs is a health care facility, and they are providing professional health care services. If they don't believe in the mission of their profession, why are they in it? They should be immunized against any communicable disease that they are likely come across, contract, then pass on to patients. I would imagine that the hospital's administration, legal department, and insurer would have something to say about that too.

So, you think a company can dictate what happens to your personal body, even if there are known risks. I don't think so.

Yep, so think again. Mandatory vaccination is common. Didn't you eat the sugar cube as a condition of attending public school? I did, and many others too. I also had to be vaccinated as a condition of employment in a previous job. BTW, what are the known side effects of the two current vaccines.

I am not so sure this person fairly represents the ICU staff. Let see how many line up to get the vaccine. My guess is all of them. They see first hand how terrible this virus is.

This is why many will continue telecommuting, no vaccine shot required if you're working from home.

Bosco, no hospital is going to fire a nurse for failure to take the vacine and no nurse fears being fired for a reason like that. Nurses are in high demand, there's a shortage and hospitals have a critical need for them. Even if fired for that reason, which a court of law would likely reverse, there are many jobs for nurses. Doctor offices, hospice, schools, nursing homes, county health all need and are looking for nurses.

Let's hope and pray this is the beginning of the end of COVID.

Other than the mask, the photo reminds me of Rosie the Riveter. Great article!

A really good analogy for this time.

I thought the same thing.