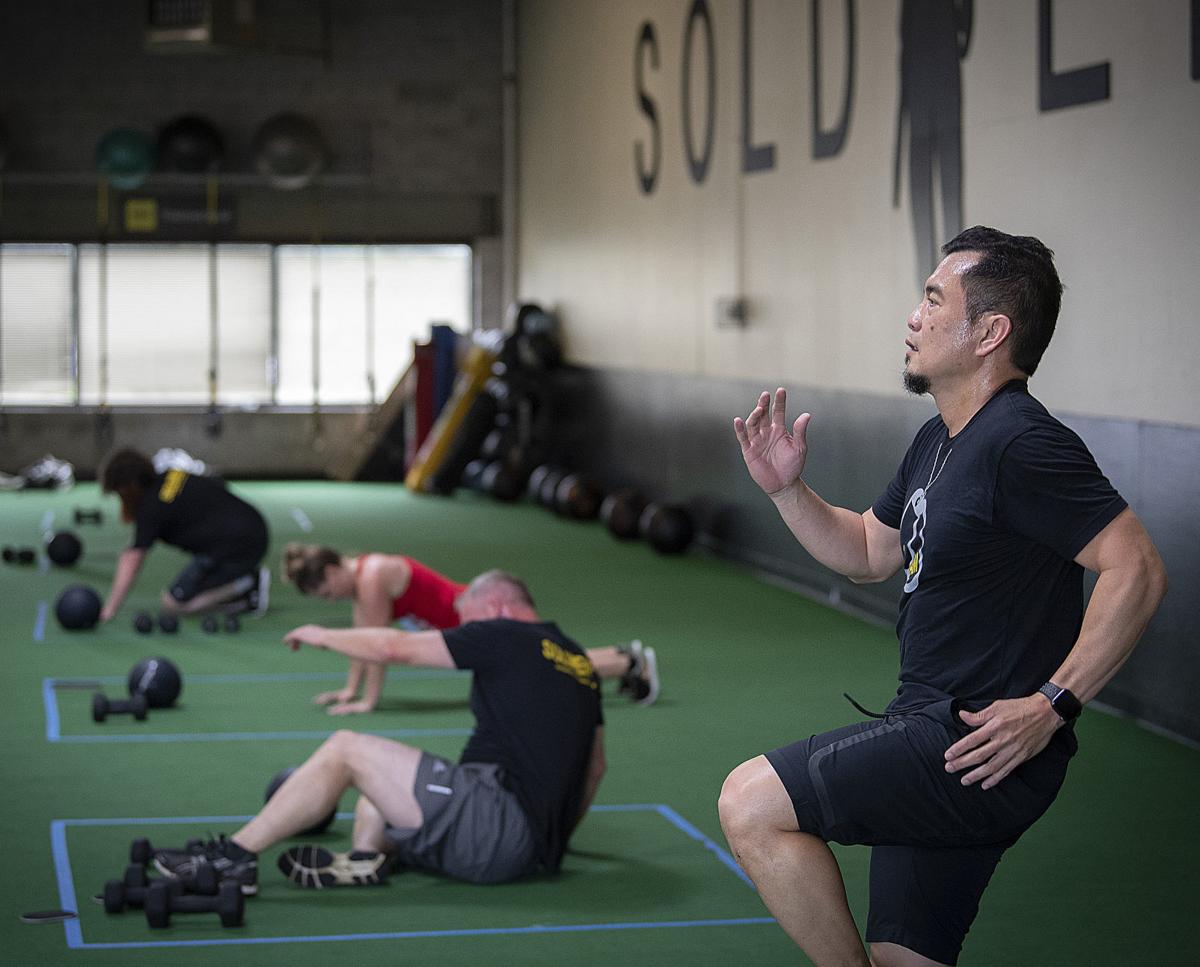 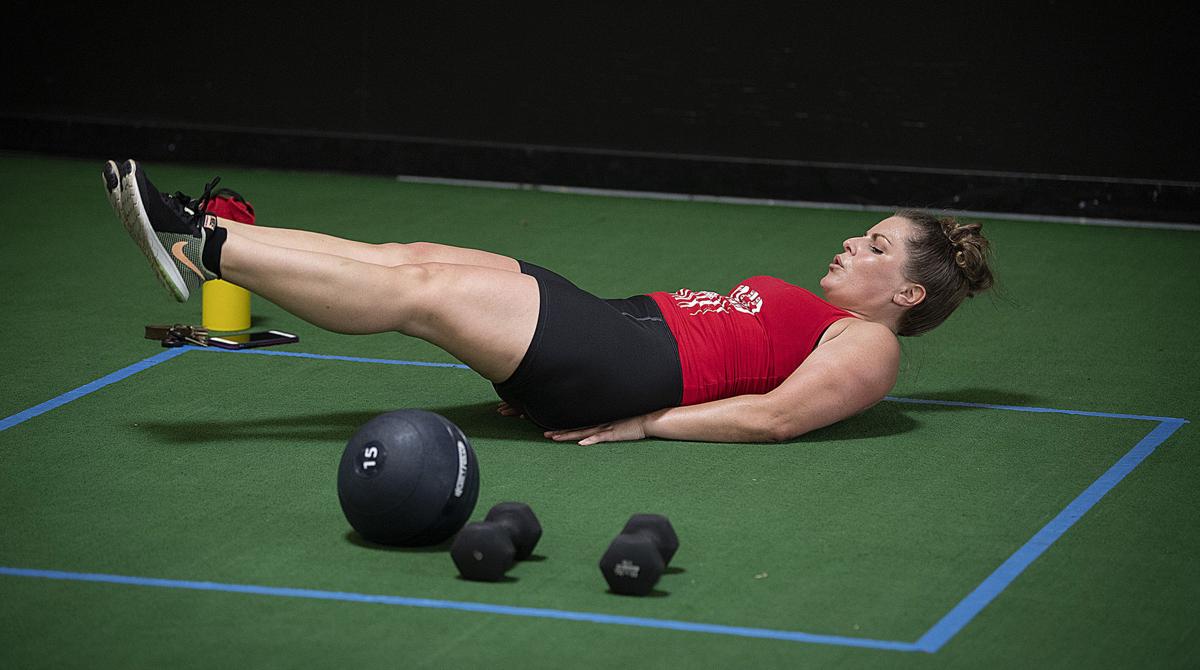 SoldierFit client Michele Donaldson works through her workout routine at the Gas House Pike gym Friday afternoon. The classes have resumed indoors but with limited class size and separation between clients created by taping boxes on the floor. 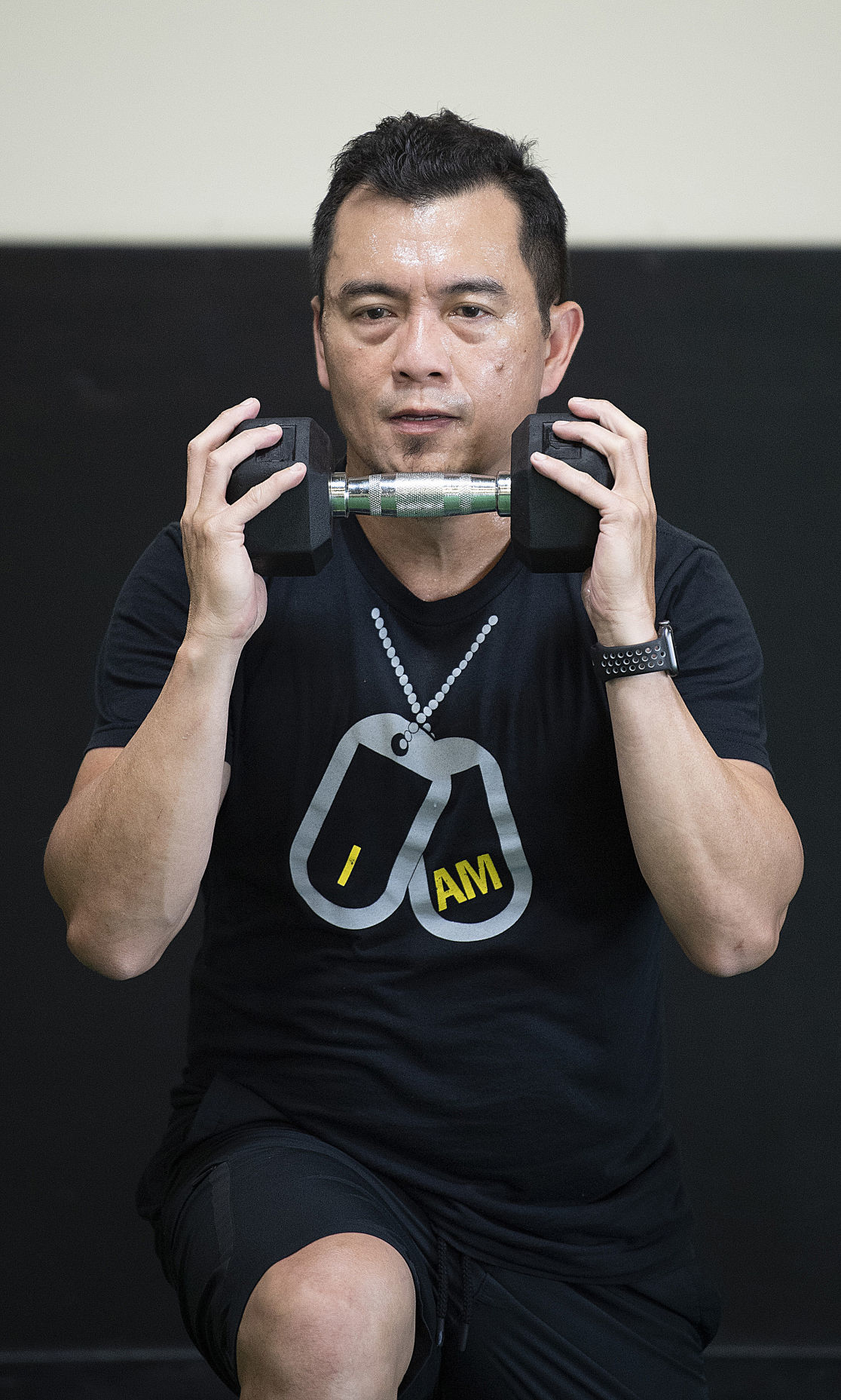 SoldierFit client Michele Donaldson works through her workout routine at the Gas House Pike gym Friday afternoon. The classes have resumed indoors but with limited class size and separation between clients created by taping boxes on the floor.

As states continue the process of reopening after being shut down as a result of the COVID-19 pandemic, gyms have become a source of healing for many who were unable to work out while quarantining.

“Part of the draw to come to the gym is the social interaction,” Val Holmes, owner of Valley Fitness in Harrisonburg, Virginia, said last week. “Most of the people coming back are super excited.”

While few gyms have been allowed to reopen at full capacity, most owners of facilities noted that the attendance restrictions haven’t really hurt their business — nor has it changed the way they typically operate. Instead, keeping an eye on cleanliness has always been a priority for most businesses before and after the outbreak.

That focus, paired with social distancing practices, have been at the forefront of everybody’s plans as they reopen to the public. Ogden Newspapers spoke with gym owners in 15 states to get a sense of how business has been going, what they are doing to help prevent the spread of the virus, and how happy they are to be back.

Gyms in Maryland got the green light to reopen Friday, operating at 50 percent capacity with social-distancing guidelines in place and facial coverings required.

Customers are ready to return, said Danny Farrar, founder and CEO of Soldierfit, which has eight locations in Maryland, some owned by the company, others by franchisees. The Frederick location began offering outdoor boot camps on May 18.

“Coming back out of this … at my five corporate-owned gyms in Maryland, we’re doing as good if not better with new member sign-ups than prior to COVID,” Farrar said.

The company began work on an online training platform in December.

“We were able to pivot and have resources available for our clients day one of the shutdown,” Farrar said.

While nothing will completely supplant the appeal of going to a gym and working out with others, “I do personally believe that a gym cannot survive post-COVID without an online training option,” he said.

OneLife Fitness has seven locations in Maryland, two of them in Frederick. Senior Vice President Nancy Terry said the company has been offering 40 classes a week on Facebook Live while closed, along with on-demand content at onelifeanywhere.com.

“We know exercise is essential to boosting your immune system and reducing your stress that was happening during quarantine,” she said.

Online access is free to members. Memberships were frozen during the closure and will be kept that way until patrons feel safe returning, Terry said, but that created a financial strain.

“We did furlough most of our employees during the time, but we’re bringing them all back now,” she said.

Soldierfit allowed members to freeze their accounts, although most continued paying as they were receiving services online or attending the outdoor activities, Farrar said.

“We took a sizable enough hit,” he said. “We got rid of some of the entry-level positions” like front-desk clerks.

Both Soldierfit and OneLife were adjusting policies and facilities last week to prepare to reopen.

“We have separated the equipment. We have turned off every other machine,” Terry said. “We’re set up just like the grocery stores. There’s arrows on the floor to guide you safely … in the right direction.”

In addition to training staff to thoroughly clean equipment with medical-grade disinfectant, OneLife has installed AirPHX air- and surface-sanitizing devices at its locations, she said.

In Pennsylvania, most of the counties have entered the “green” phase, which allows gyms and fitness centers to open at 50 percent capacity, while maintaining social distancing.

Most gyms have spaced out their equipment, turning off every other cardio machine. They have also reduced hours of operations, to ensure time after hours for the staff to do a thorough sanitization.

Group classes and trainings have also been significantly reduced in size and hours.

In Harrisonburg, Virginia, Val Holmes, the owner of Valley Fitness, said she’s had a steady amount of people returning to work out since she opened last week. People have been eager to get back to the grind, she said.

“It was one of the best days I can remember, being able to reopen,” Holmes said. “I’ve been here since 1983. It’s a very tight-knit community, and it is like family.”

She had to make a lot of changes before she was able to reopen, however, as the state mandated that people be spaced 10 feet apart while exercising indoors.

“We’re a gym — things are not 10 feet apart,” Holmes said. “We had to take quite a bit of equipment out of commission. We tried to stake out our benches so we have as much space as possible. We did the best we could.”

The capacity regulation wasn’t a problem for her, as her gym is in a large building and they can have more than 200 people at one time. That, she said, is important for a gym that draws a lot of people for group fitness classes.

In February, Rachel Phillips and Rachel Paynter took over 1201 Crossfit in Elkins after serving as volunteer coaches there.

“After being owners for a month, we closed our business,” Phillips said.

They made the call the day before Gov. Jim Justice issued a stay-at-home order that closed gyms and other businesses around the state in an effort to slow the spread of the novel coronavirus.

But they didn’t stop helping their members work toward fitness and nutrition goals.

Members were given certain pieces of equipment to use at home. Three classes were offered daily using the online conferencing app Zoom, and videos of classes were uploaded to YouTube for folks who couldn’t join in live.

The new owners had been working to set up an online apparel store, and the shutdown gave them a chance to move that along.

With continued payments from members still enjoying the benefit of their services, albeit in a different way, “we didn’t take a hit financially,” Phillips said. “It was a scary time, but 1201’s an amazing community.”

The business had been family owned and run with the help of volunteer coaches, so the new owners had no workers to furlough.

“We at that point hadn’t even taken on staff so we didn’t have to make those decisions, thankfully,” Phillips said.

Justice gave the go-ahead for gyms to reopen on May 18, with requirements that include limiting occupancy to 40 percent, implementing social-distancing guidelines, employees and customers wearing face coverings and checking temperatures for staff and patrons entering the facility.

Class sizes were cut to eight people, although some have recently been raised to 10, Phillips said. The durations were shortened to allow time to sanitize rooms in between and reduce inter-mingling of participants.

Each member is given their own bottle of disinfectant and cleaning towel when they come in, Phillips said.

“Our community has been used to always cleaning up after themselves,” she said. “We had that standard all along.”

Customers were inquiring when the gym would be able to reopen, Phillips said.

“We’ve had amazing attendance. We’ve had old members … come back,” she said.

For MOVement Fitness and Rec Center in Marietta, Ohio, many of those returning have stopped to say how much they missed the facility. The 65,000 square foot retail space was renovated by Brant Whited and his wife three years ago and turned into a fitness facility, with a soccer field and CrossFit.

“We wanted to try to revitalize part of our home town and give it something unique to where the members of that community can be proud of it,” Whited said. “It’s a long difficult road trying to get that process under way, renovating that whole building, but we got it done. So shutting down was really tough for us, of course from a business aspect, but just personally because we’ve been so tied up in this over the past three years.”

After experiencing a “tough few months,” he started figuring out what reopening would look like and what changes and improvements would have to be made. When they did reopen MOVement, Whited wanted it to be “the best for our community and our members,” while making sure everyone was comfortable.

Whited said the fitness center has even picked up new members since reopening.

“We actually have one of those electrostatic sanitizing guns which I was fortunate to buy,” he said. “We’ve kind of ramped up using that and spread out some equipment. We’ve had pretty much all positive feedback.”

He said if nothing else, he hopes the pandemic helps stress the importance of physical health and fitness for the body as a whole.

“I couldn’t be more happy and proud with our members and our staff, how they’ve embraced everything,” Whited said.