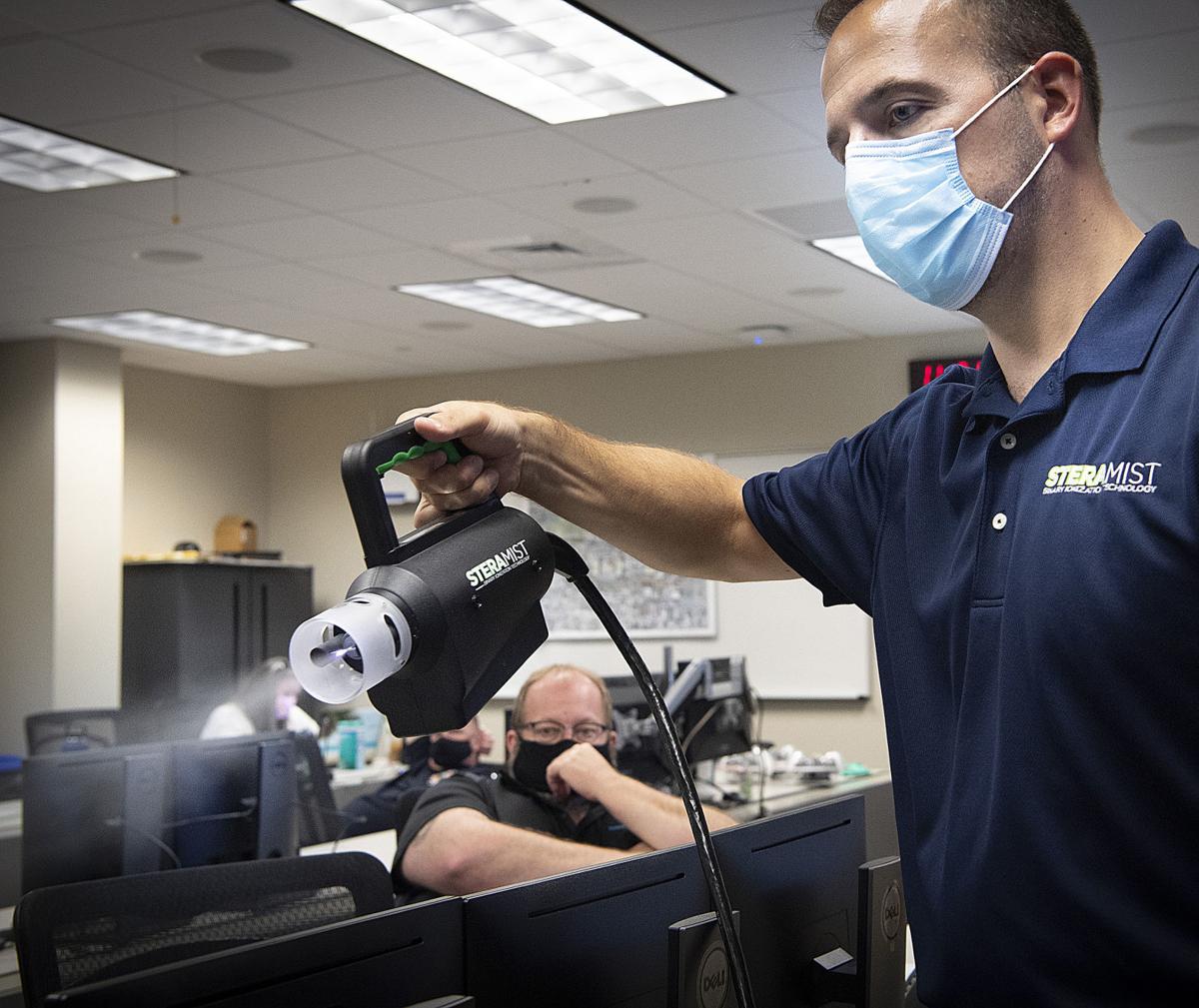 Jim Reynolds, a representative from Frederick-based TOMI Environmental Solutions, demonstrates the use of a new cleaning device delivered to the 911 Emergency Communications Center at the Frederick County Public Safety Training Facility Tuesday. The demonstration used water instead of the 7.8 percent hydrogen peroxide solution the machine uses to create an ionized hydrogen peroxide in the form of the dry mist, which can break down and kill viruses including the novel coronavirus within seconds. 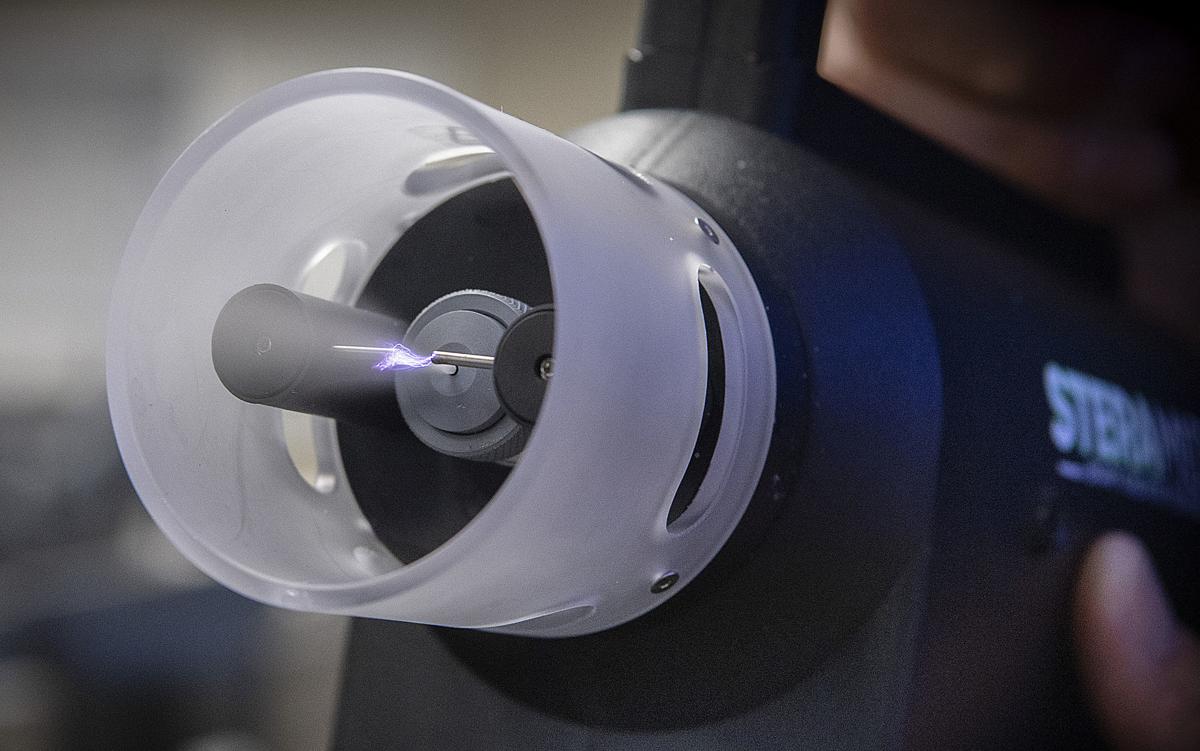 The applicator portion of the device resembled a handheld vacuum cleaner, only instead of an intake designed to suck in surrounding air, the short nozzle on the business end of the device sent out a stream of fine, dry mist into the room.

While the device in action will draw from a gallon of hydrogen peroxide solution, the mist on Tuesday came from a gallon of distilled water for the purposes of the demonstration. But the unique science behind the machine's ability to kill 99.9999 percent of viruses and bacteria comes from the cold plasma arc running between two electrodes just outside the nozzle.

Sparking bright blue, the arc produced by the electrodes converts the 7.8 percent hydrogen peroxide solution into ionized hydrogen peroxide in the form of the dry mist, which can seep into every crack and crevice to break down and kill viruses, including the novel coronavirus, within seconds, said Jim Reynolds, a representative from Frederick-based TOMI Environmental Solutions, who delivered the machine and led employees in a training session Tuesday.

"It's not real heavy, either," Woolcock said, pointing out another accommodating feature of the SteraMist surface unit device as she handed the applicator back to Reynolds.

While the company does offer larger and even wall-mounted machines designed to quickly disinfect entire rooms, the surface unit purchased for the county's Emergency Communications Center came in a fairly light suitcase from which the tube and applicator extend, allowing a user to move gradually around a room, disinfecting surfaces and even the sensitive computer equipment and monitors with the non-corrosive ionized hydrogen peroxide mist.

Before making the purchase, the facility made arrangements with Fort Detrick for the military base's personnel to provide regular disinfection of the dispatch and call center with its own SteraMist machine, said Mary Domer, a representative of the Frederick County Emergency Management Division.

"We have a backup center that we can relocate to in case anything happens to the primary [call] center. Usually, before the pandemic, we would go there on Wednesdays to make sure everything is operational, so we kind of bounce back and forth between the primary call center and our back-up center," Domer said. "So what we were doing was having Fort Detrick come in and disinfect the primary center while we’re operating in our backup location."

That strategy will remain the plan in the future, but the county having its own device will help ease logistics and provide a reliable disinfection device, Domer said.

Still, the surface unit did not come cheap. The portable device has a list price of about $23,000, which is far more expensive than some other devices on the market that use other chemical solutions and run for closer to $5,000 or so. The catch is, those cheaper devices use solutions based on highly corrosive compounds like ammonia, which can quickly damage sensitive equipment with repeated exposures, Reynolds said.

"This is the Ferrari, guys," Reynolds told the small classroom of about a dozen ECC and public safety employees. "This is the Ferrari of disinfectants; it's expensive, but it's very effective and it's something that you're going to be seeing a lot more of moving forward."

Woolcock said she was excited to begin using the new machine to disinfect her and her coworkers' work spaces on top of the steps the call center already has in place to keep employees safe from infection from COVID-19 and other harmful viruses or bacteria.

"We're going to clean everything like we normally would, we would deep clean everything, dust everything, wipe everything down and then, at the end of that, go through with this and use it throughout the center, so anything that we missed will also be cleaned now," Woolcock said. "I was really absolutely excited when I heard about this."

Curious, is this something you could use on the employees before they enter the building?

Good question! I can see all restaurants and other businesses buying one.