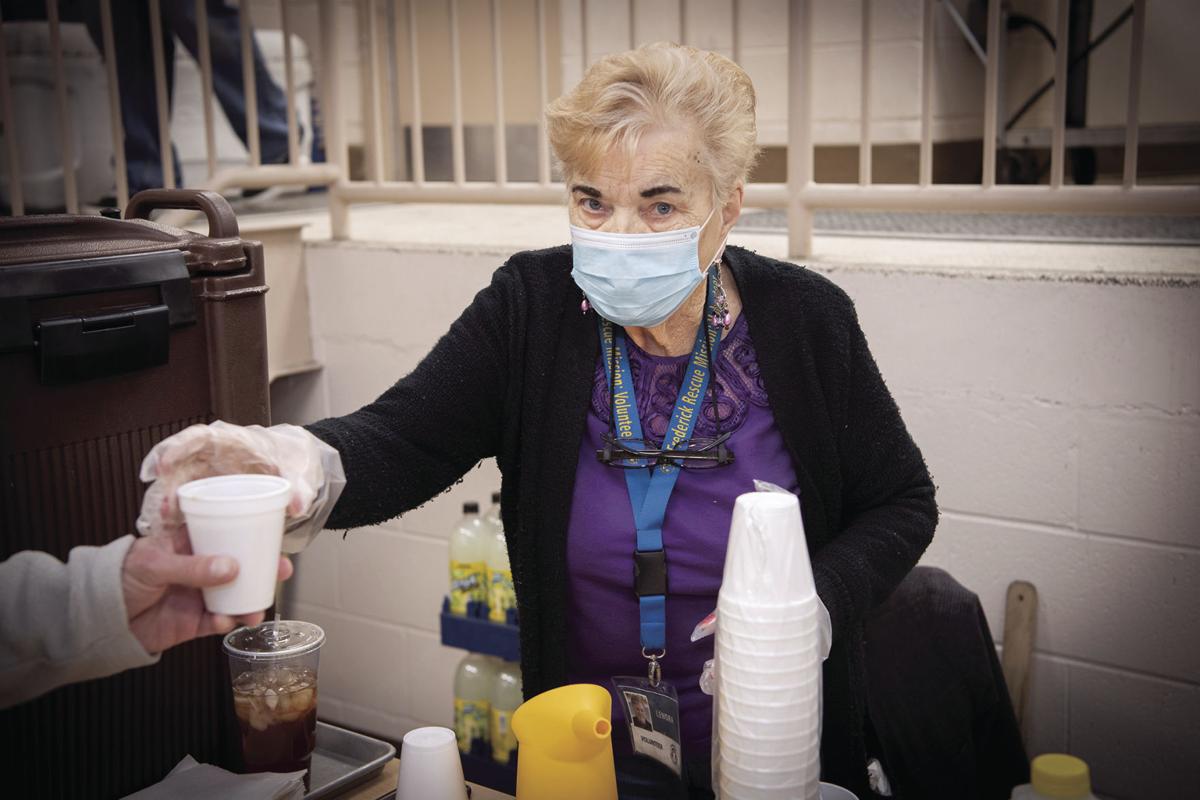 Lenora Staley, 87, has been volunteering serving breakfast at the Frederick Rescue Mission for nearly eight years. 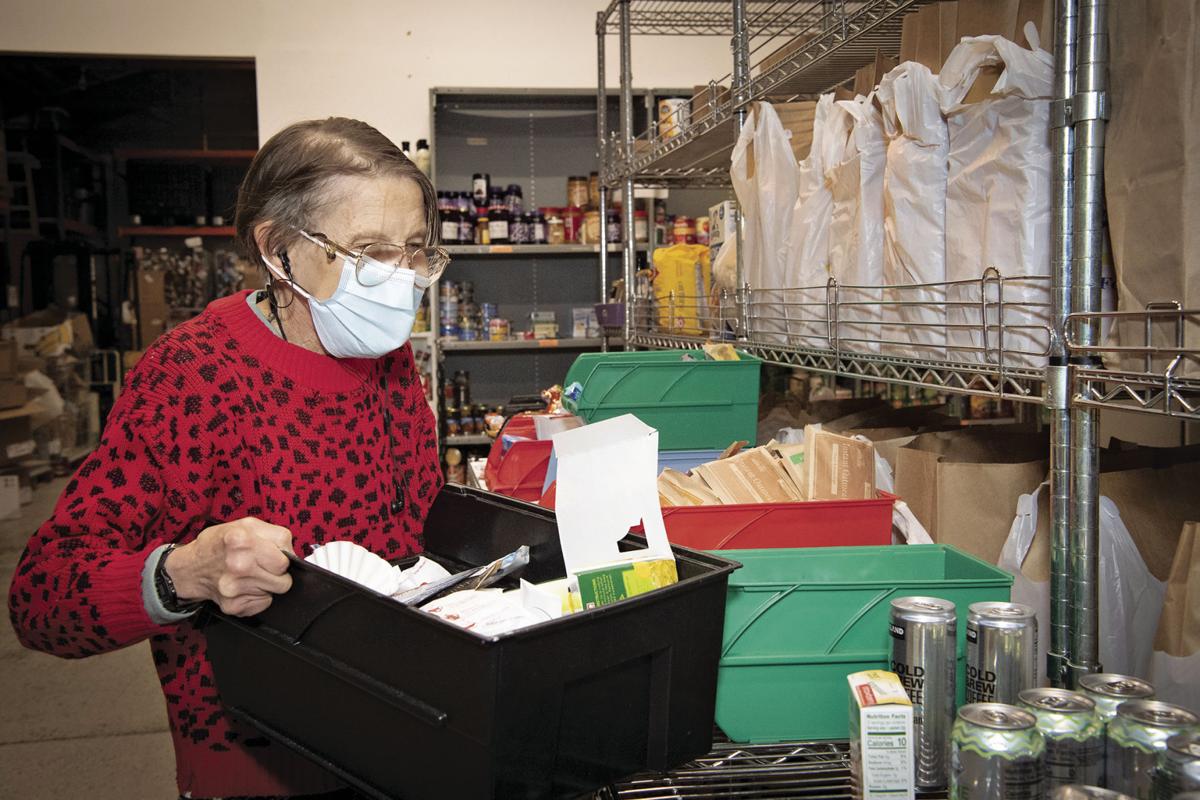 Lenora Staley, 87, has been volunteering serving breakfast at the Frederick Rescue Mission for nearly eight years.

Despite being in a pandemic that has stretched for almost a year, community members are still willing to give their time to help local nonprofits.

The Frederick Community Action Agency, the Frederick Rescue Mission and United Way of Frederick County are among nonprofits in the county that meet basic human needs, and each utilizes volunteers in different ways.

At the Frederick Rescue Mission, whose services include assisting those experiencing chemical addiction, homelessness and hunger, volunteers help with many tasks, including food preparation and distribution, serving food, helping at the Rescue Mission’s front desk and assisting at Rescued Treasures, the mission’s clothing program, “and other duties as assigned,” said Sandie Hall, public relations coordinator.

“Ordinarily we have 40 to 50 volunteers a day on campus. During COVID, we are seeing 15 to 20,” Hall said. “We’re not anywhere up to our full capacity of volunteers. We really rely so heavily on them and their efforts.”

Generally, and overwhelmingly perhaps, Hall said the people who volunteer at the mission are all in.

“Their heart is to be here,” she said. “Especially at a time like this, when the COVID pandemic has made life so difficult, especially for many of the people that we serve, and our volunteers are acutely aware of that need, and so they really are trying to do and want to do all they can, even more so during this time.”

“We really, really want every dollar that comes in to go into people’s mouths and on their back and to helping them to change their lives,” she said. “[Volunteers’] effort, their heart, their passion to come along and partner with us … is helping … to make sure that those dollars go where they’re most needed.”

Board member Alyce Luck, 69, has volunteered at the mission for about nine years and is in the kitchen weekly.

Luck was the service learning coordinator at Frederick High School for about 15 of her 24 years there as a teacher and would offer students opportunities to serve in the community.

“The Rescue Mission was one of the places that I would even take them for visits when I taught sociology, and so it was on my bucket list of places to volunteer,” she said, adding that she also volunteers at Frederick Health Hospital.

All of her volunteer experiences allow her to learn something she didn’t know before, from another person’s perspective. “Everybody’s on a journey,” she said. “Once you get to sit in community with others in the rawness of life, you get a better perspective of what life is really like.”

“There’s several ways that we use volunteers,” said Shana Knight, marketing and outreach manager. “And we do have our own programs that happen several times throughout the year … like Day of Action, VITA.”

While some older volunteers are, understandably, exercising caution when it comes to volunteering in person, people are still willing to volunteer their time.

“People who probably never volunteered before are wanting to help out just because of the circumstances,” Knight said. “We definitely see a lot of people being very generous.”

Volunteers among a nonprofit’s most essential resources, Knight said. “A lot of times, nonprofits have a small staff. I feel like I can’t even really put it into words how important volunteers are.”

At the Frederick Community Action Agency, Chris Bard, supervisor of food and nutrition services, said volunteers are still helping out at the food bank and soup kitchen.

The agency is the federally designated Community Action Agency for Frederick County. Started in 1968, the agency has sponsored by the city of Frederick and the Friends for Neighborhood Progress Inc. with support from Frederick County Government. It administers programs and services to assist disadvantaged and low-income people, according to the city’s website.

“The way that COVID-19 has impacted that operation is prior to COVID-19, a lot of our volunteers [were] in their 60s or older—not all of them but quite a bit of them—and quite naturally they didn’t want to come and help at that point due to health concerns,” he said.

Because of that staff had to pick up a lot of the work. They still had volunteers come in, but not as many, Bard said.

“We depend on volunteers. They help us so much,” he said.

In December, the city of Frederick issued a call for more FCAA volunteers and Bard said he’s seen more volunteers since then. “And yes, they are younger,” he said. “But some of our old volunteers are starting to come back, as well.”

As for the number of volunteers, Bard said prior to COVID the soup kitchen would have had eight to 10 volunteers to serve the evening meal, but now they only need three or four, “because we're not letting everybody in at one time,” due to COVID restrictions.

“Volunteers serve a vital role to nonprofits,” he said, noting his appreciation that so many people in the community are very willing to help those in need.