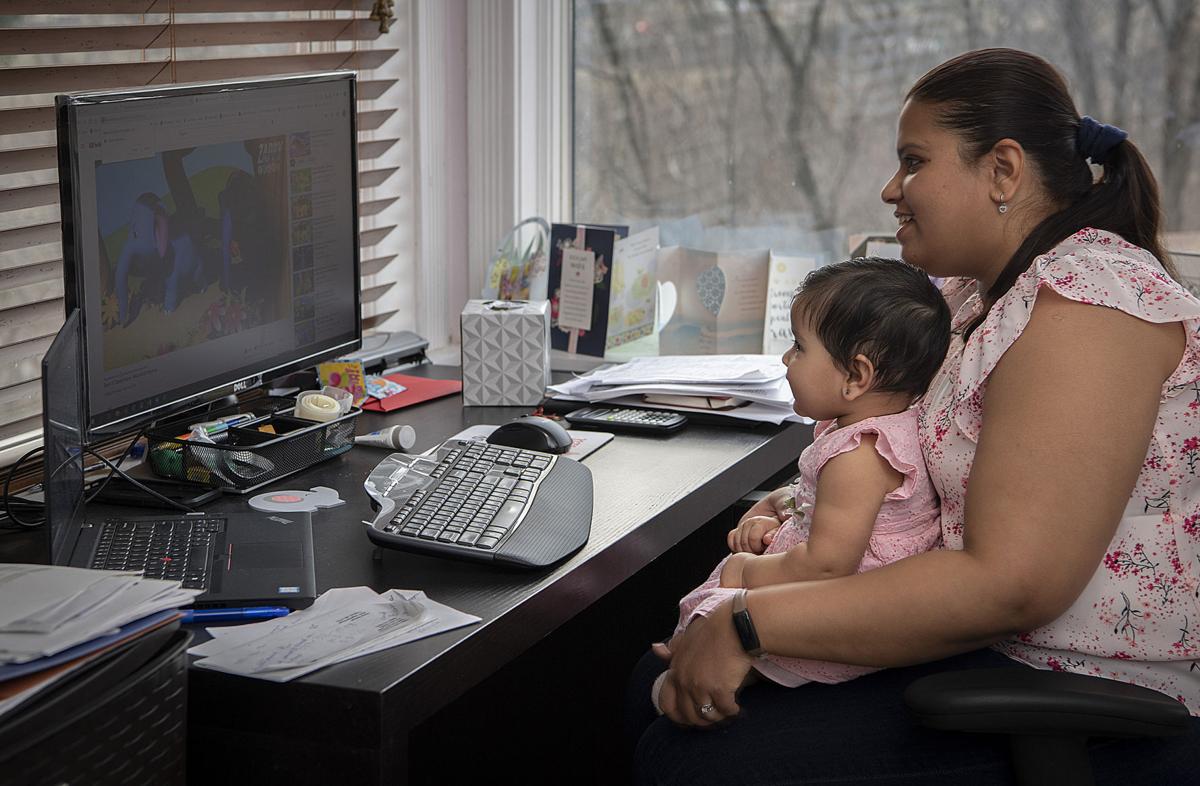 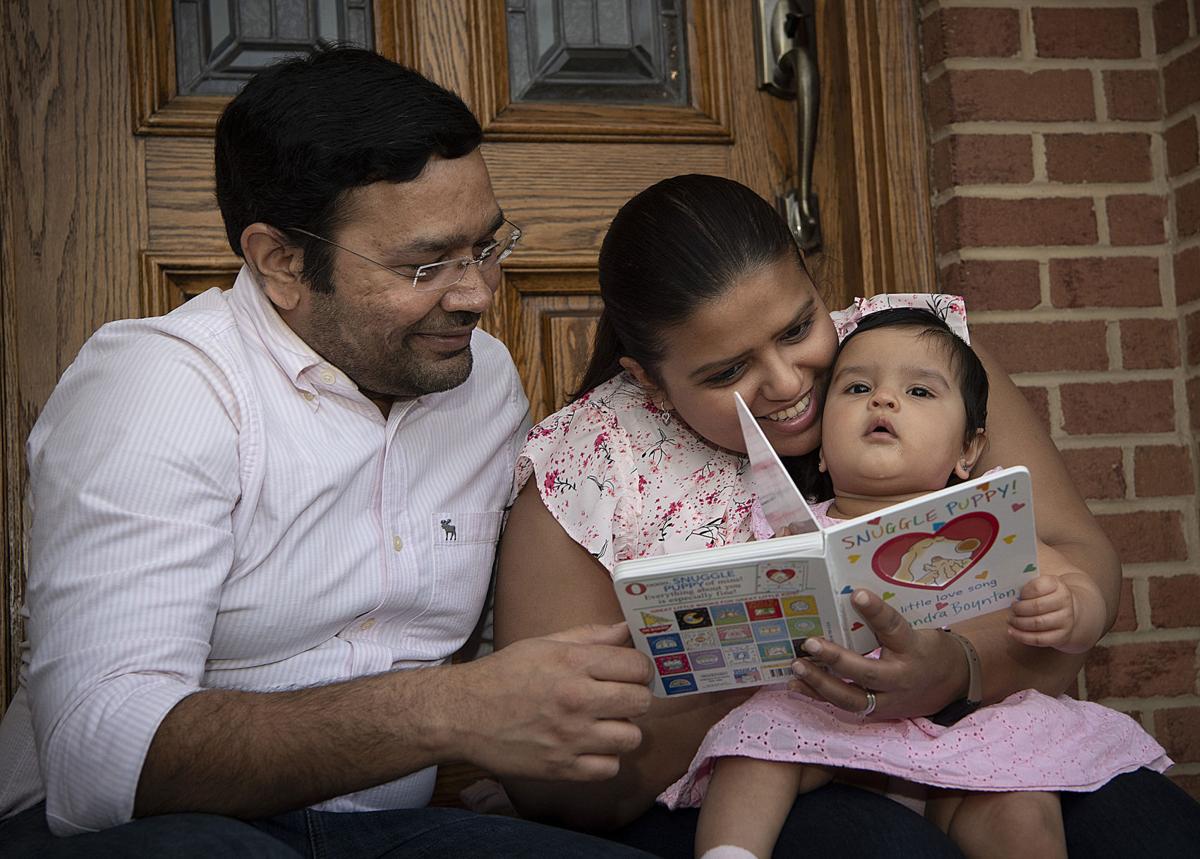 Komal Sampat did not expect to have her first-born child while wearing a mask. She also did not expect to be so isolated after the birth, with her family in India, stuck on the other side of the world due to unexpected travel restrictions.

But the coronavirus pandemic had other plans for her and thousands of other new mothers.

“We came home, and we were just a little bit confused and lost,” she said. “Because nobody could come and help us out.”

Working parents are already dealt a double-duty situation, but adding a pandemic where many had to start working from home, day cares were closed and schools were going online certainly did not help. The one word mothers repeatedly use to describe the past year: stressful.

“It is exhausting,” she said. “The best way I can describe what we’ve been doing is Groundhog’s Day.”

At first, Rachel and her husband’s hours matched up, which made parenting difficult. If they were both busy, there was nobody to watch their daughter.

Meinhart, a speech pathologist who has to hold her meetings in private, switched her hours around so she could take care of her daughter while her husband taught during the day. She now works evenings and weekends so she can still get a full 40 hours in. She thinks keeping her daughter safe at home is worth it, but it’s also difficult.

Susan Fitzpatrick, too, knows the struggles of adjusting her life around the new normal. Her son was due last summer, and as a hairdresser, she wasn’t guaranteed any maternity leave. She had planned to take some time off after the birth, but she was temporarily laid off from her job when her salon had to close in March. Then, due to capacity limitations, her boss decided to keep the salon closed in May. She was left without a job.

Twenty-five weeks pregnant and already taking care of her 4-year-old daughter, she decided to take action. She opened her own salon just three days after losing her job.

“I wasn’t expecting to do it, but now that I look back, there’s no way I would have been able to mentally handle staying at my old salon and having to do everything I’m doing now with virtual school,” she said. “I don’t see how women that work 40-plus hours a week can do it.”

The juggling act is a major struggle for many parents. Ashley Schwartz, a special education teacher, said teaching virtually while her toddler was playing right across the hall and her husband was also working from home felt like being torn in different directions.

“You always want to make sure you have the best for your kids,” she said. “But there were times where I said, ‘Am I giving her the TV or the iPad as a babysitter to get through this next hour of teaching?’”

Schwartz decided to put her daughter into day care when it opened back up. She was especially worried about her child’s emotional and social development if she was stuck inside all day.

Sonoo Mehra also made the decision to put her two daughters, ages 1 and 4, into a part-time preschool just a few weeks ago. She said the first few months of the pandemic actually went well for her family. She and her husband, who own a wine shop and deli in Montgomery County, saved time on commuting and spent more time outdoors with their daughters.

But once the weather turned cold, the days weren’t going as smoothly. Her daughters didn’t want to do indoor activities. They wanted to see other kids.

Keeping it all together

Lauren Coon, a bartender, had her son just a couple of months into the pandemic. She and her husband have switched their schedules so they can be opposite from each other, one of them always home.

“Originally when we got pregnant, we figured we’d be able to use family or find some sort of child care so that we could both still work full-time,” she said. “But with everything going on, we don’t want to get anybody sick, and we don’t want the baby to get sick.”

She imagined her first year with her baby differently: visits with her nieces, seeing him explore the world for the first time. Instead, she feels isolated.

Sampat also felt overwhelmed last spring after the birth of her daughter. She was born four weeks early and didn’t see another human outside the house until her first pediatrician appointment, when Sampat was told her daughter was under fed.

Without in-person lactation classes and other services for new moms, she felt lost.

“It was really hard because there was a huge disconnect between what everybody needed,” she said, “And at the same time, the professionals don’t know because everybody was adapting to the situation.”

Judgment toward mothers is already abundant in America, but Coon found that she feels increasingly guilty about the decisions that she makes for her family during the pandemic. With her son so young, she and her husband do not want extended family to travel to see him, and they often feel like they have to explain themselves.

“I mean, it’s depressing being locked away for a year essentially with minimal contacts,” she said. “I think people should have patience and understanding with others’ decisions.”

That isolation has been incredibly daunting for Mehra. In her spare time — whenever she can find it — she helps older people who are looking for vaccines get appointments. She sits with her deli customers and checks every vaccine tracker she knows. She said she never turns her brain off.

Seeing family and friends is infrequent, and she feels as if everyone is running on autopilot, saying they’re fine instead of opening up the floodgates of emotion.

But it’s hard to keep everything together. A few weeks ago, her daughter asked her mother-in-law why Mehra was upset. Mehra hadn’t talked to her daughter at all about being upset — but she could tell.

“We all have to consistently — despite our issues or how we feel — keep it together,” she said. “Because they see it.”

Divya, you are darling.