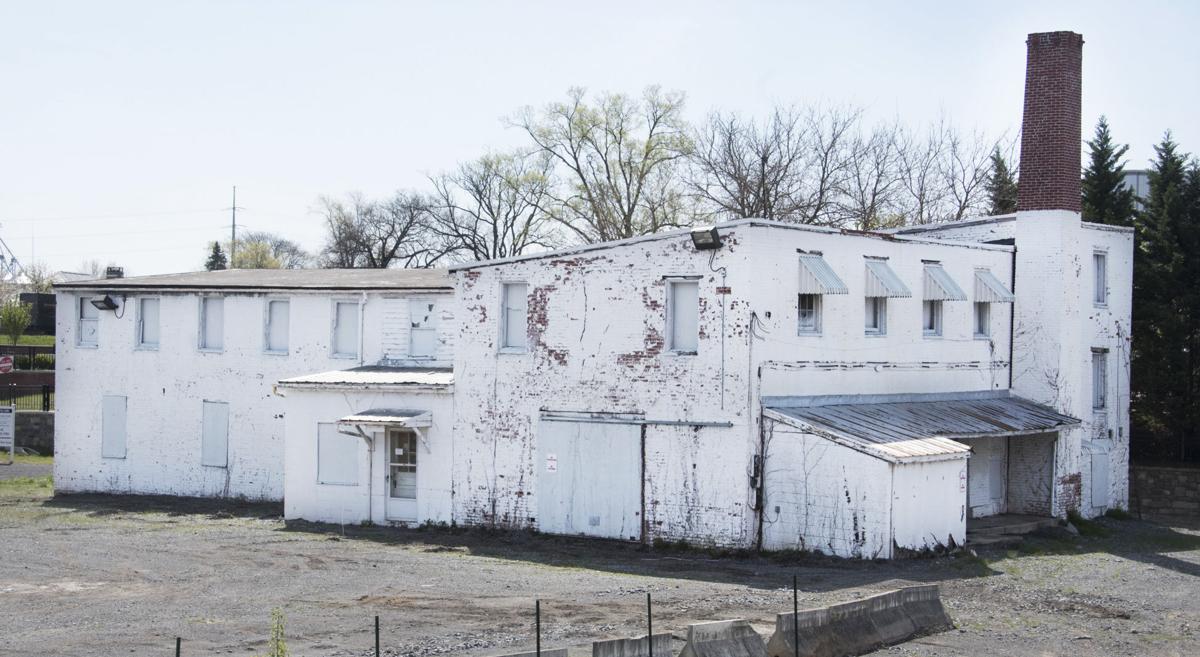 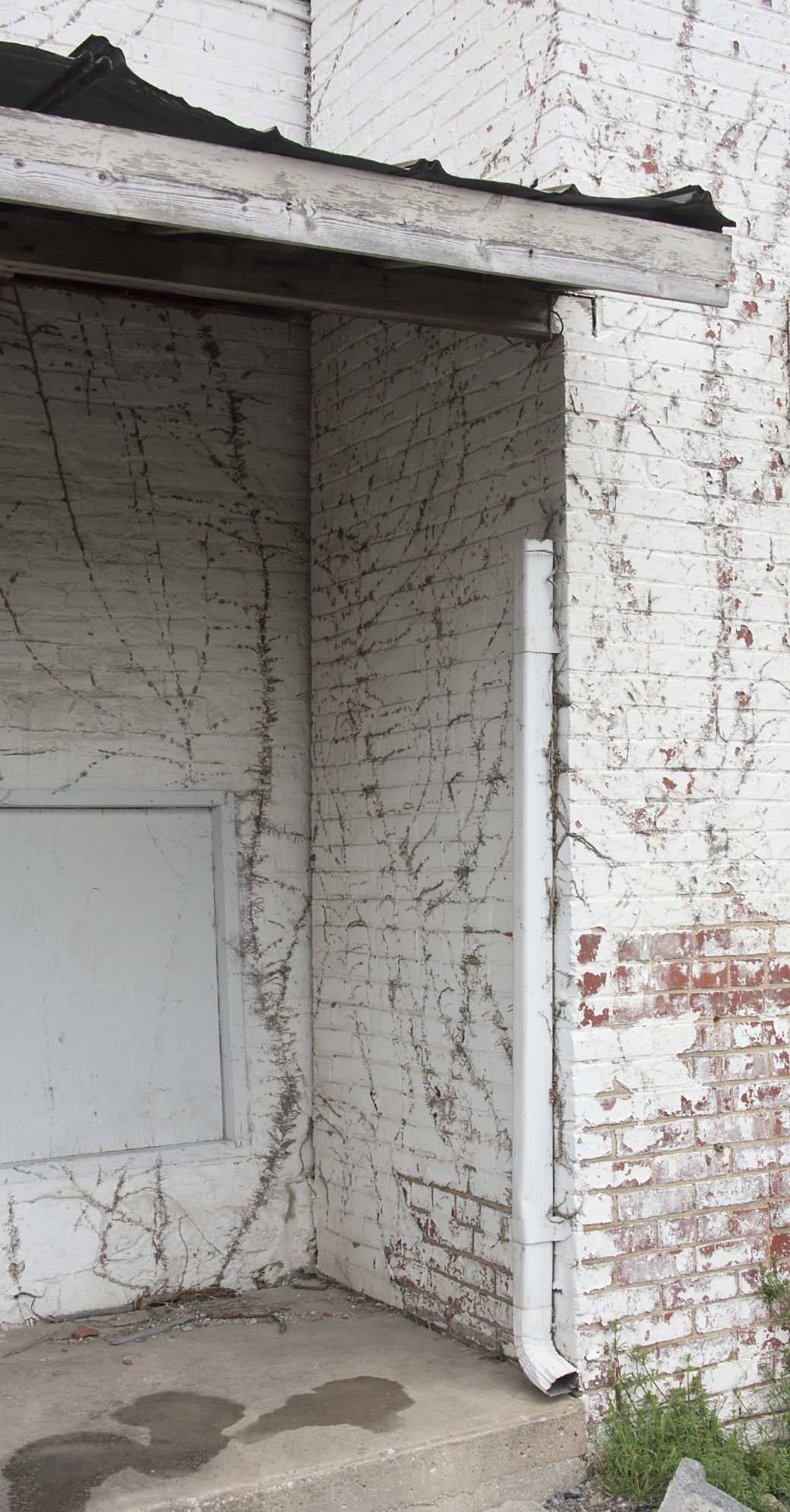 One of the code violations at the Birely Tannery building at 212 E. Patrick St. There are missing drainpipes and defective gutters like this on the building that have allowed significant damage to its walls and foundation. 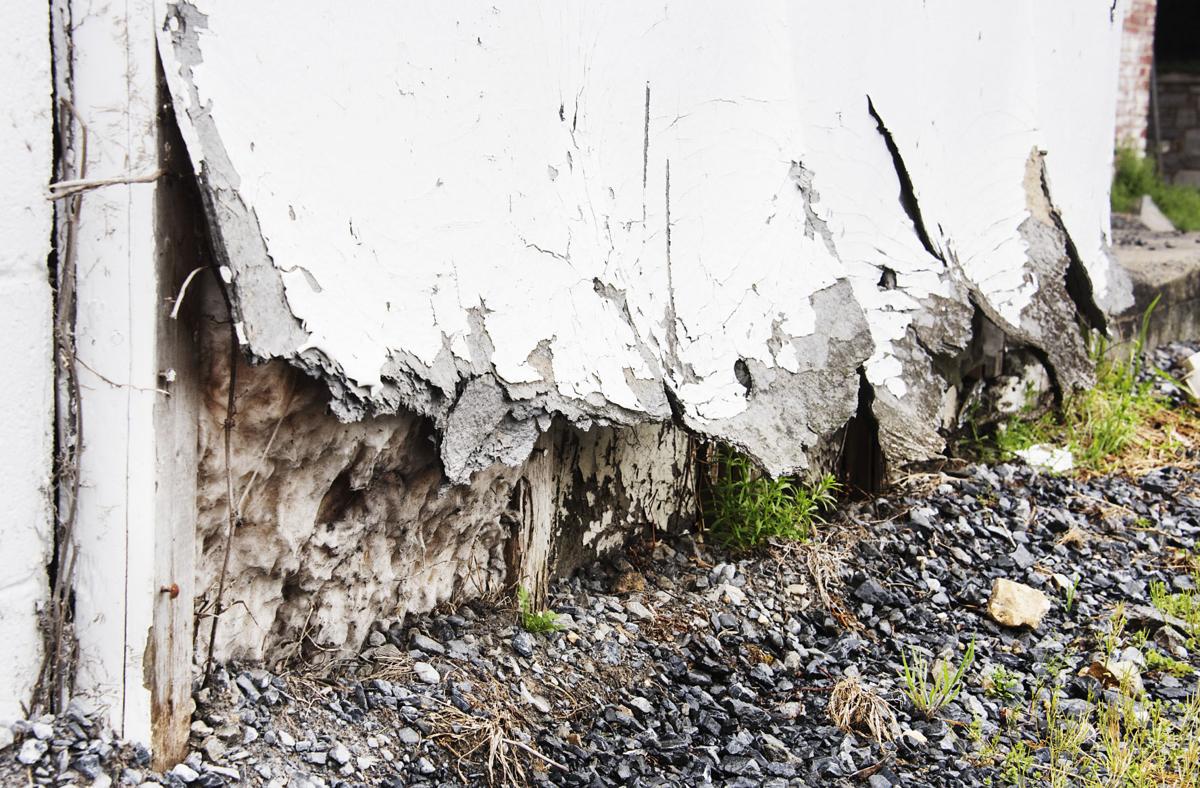 One of the code violations at the Birely Tannery building at 212 E. Patrick St. The building has damaged and rotting fascia like this that allows water to penetrate the building. 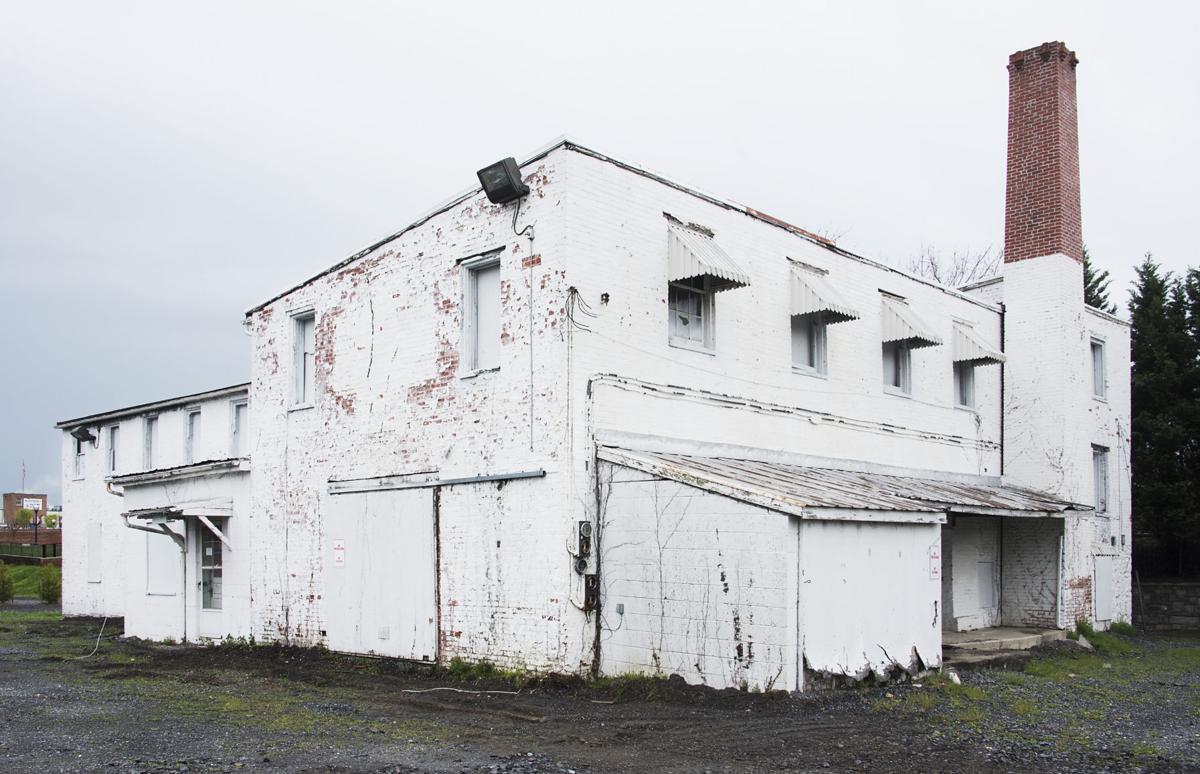 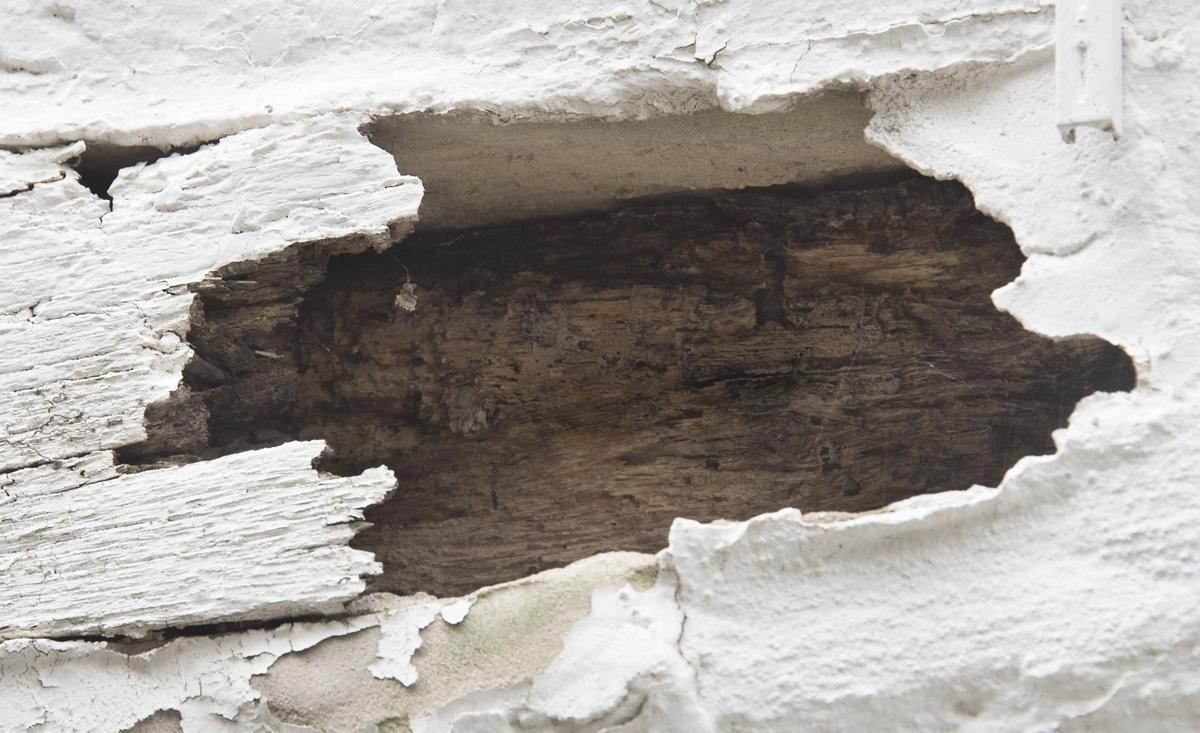 One of the code violations at the Birely Tannery building at 212 E. Patrick St. There is damage to the fascia like this that allows water to penetrate the building. 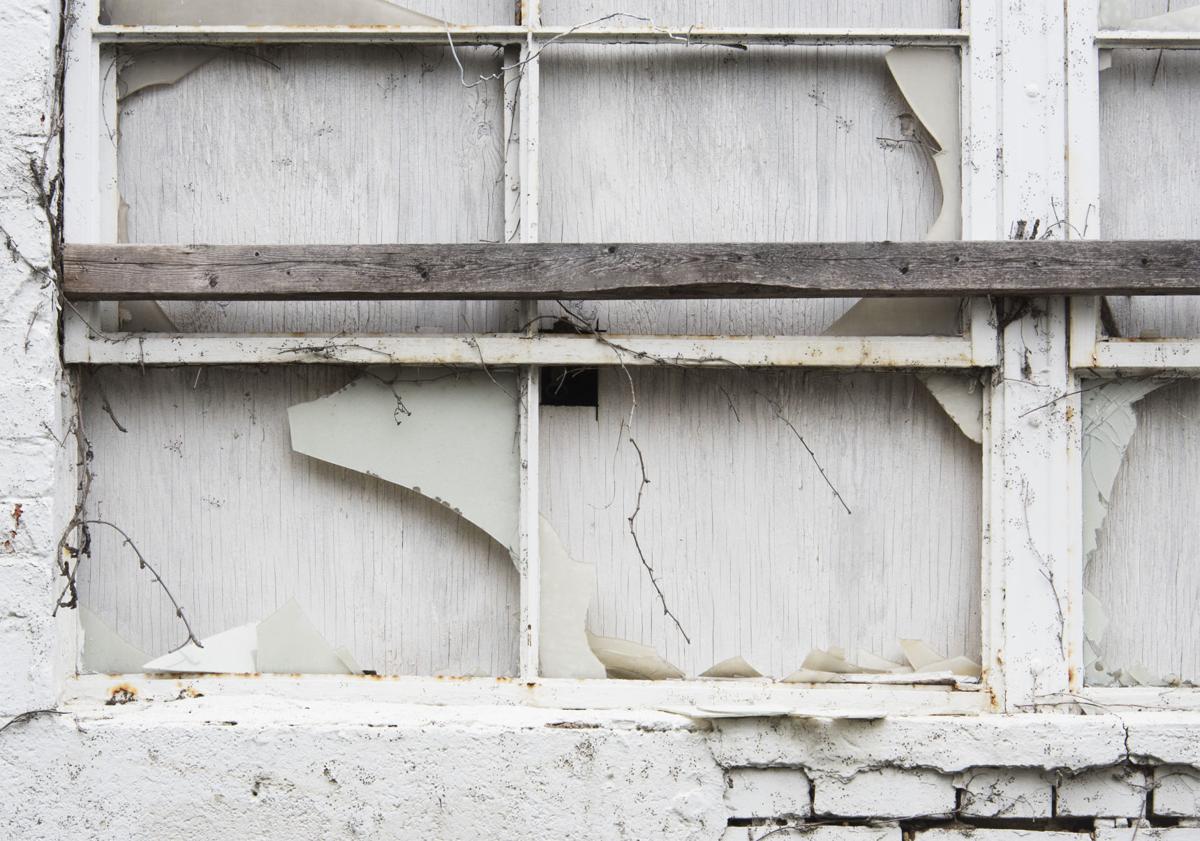 One of the code violations at the Birely Tannery building at 212 E. Patrick St. A number of the windows are improperly boarded from the inside, and broken glass leaves the building interior exposed to water damage.

One of the code violations at the Birely Tannery building at 212 E. Patrick St. There are missing drainpipes and defective gutters like this on the building that have allowed significant damage to its walls and foundation.

One of the code violations at the Birely Tannery building at 212 E. Patrick St. The building has damaged and rotting fascia like this that allows water to penetrate the building.

One of the code violations at the Birely Tannery building at 212 E. Patrick St. There is damage to the fascia like this that allows water to penetrate the building.

One of the code violations at the Birely Tannery building at 212 E. Patrick St. A number of the windows are improperly boarded from the inside, and broken glass leaves the building interior exposed to water damage.

Developers and architects working on Frederick’s proposed downtown hotel and conference center promised this week that historic preservation was a key element in developing project plans over the past several years.

A group of historic preservation activists are not so convinced, though, and urged members of the city’s Historic Preservation Commission at a workshop Thursday to seriously consider the repercussions of constructing the planned 180-room hotel and 20,000-square-foot conference center in the heart of the Frederick Town Historic District.

“I want you to hold this project, not the individual person but this project, to the fire,” former Historic Preservation Commission Chairman Scott Winnette said to commissioners at the workshop. “Just hold it to the fire, they can figure out how to make it work.”

The project is planned for 200-212 E. Patrick St. along Carroll Creek, the site of the historic Birely Tannery and the former Frederick News-Post building, which was once the historic Frederick trolley station. The commission is tasked to view project plans and decide how to best preserve the historic elements of the site as it moves forward.

Winnette, who spent 10 years on the other side of the dais, said he believes city officials made a mistake when they issued a request for proposal for the project at that site several years ago. He urged the historic preservation commissioners to preserve not only the historic elements of the tannery site, which date back to the 1860s when tanning was the biggest industry in the city, but also save the early 20th-century brick building now slated for demolition.

The commission voted July 13 to designate the tannery building and surrounding archaeological site as a contributing resource of unusual importance to the district. The vote held off a request to demolish the building to give commissioners time to review the plans and determine how to best preserve the historic elements of the site.

Thursday’s workshop was the second one the commissioners held and will not be the last.

Pete Plamondon Jr., co-president of developers Plamondon Hospitality Partners, said he expects at least two more workshops to discuss the project before the commissioners are ready to vote. He said the timeline for the project is at the mercy of the commission, as it must be approved at that level to move forward.

Winnette’s comments Thursday, and similar comments from several other members of the public who are interested in preserving the city’s historic elements, followed a lengthy presentation from architect Peter Fillat and Plamondon regarding the latest project plans.

Reaching the decision, they said, was a long and arduous process, and they did not come to it easily.

Plamondon explained that the tannery building’s odd shape, small size and location an entire level below Carroll Creek make it an undesirable candidate for rehabilitation at its current spot.

The condition of the building also leaves a lot to be desired, Fillet added.

“It’s above average in terms of scary,” he said, referring to the building’s run-down state.

Fillat also pointed out that many of the historic elements of the building are no longer there, citing several fires that happened over the years that ruined various parts of it.

Winnette and others who commented Thursday and during other elements of the process disagree, though. Several project opponents have said the tannery building is the last piece of history the city has that pays homage to the tanning industry and its importance to the area. The building has been classified as the last tanning facility in Maryland. A report from the Maryland Historical Trust also designated the building and archaeological site as candidates for the National Register of Historic Places, thus giving it further historic significance, according to some of the commenters.

Plamondon also explained how the brick trolley building was instead chosen for rehabilitation. He said the structure is in a much better location on Patrick Street and in better condition.

“It was a pretty easy decision on our part to say that’s the building to restore,” Plamondon said. “Because of the prominence, site and condition, maybe most importantly.”

Plamondon also responded to allegations that the architects and developers have not considered the historic elements of the tannery and the site as a whole when developing the project plans over the past several years.

“The tannery business along Carroll Creek has always been first and foremost,” he said. “We are not one to disrespect or ignore the history of Frederick, I assure you.”

At the next workshop, the architects and developers are set to present more details of the efforts made to try to incorporate the tannery building into the project plans and why they will not work.

Pete Plamondon claims that the the history of tanning “has always been first and foremost” in his thinking. Baloney. In his 2014 submission to the City he wrote (p180) that the Birely Tannery building was insignificant historically. “Based on extensive historical studies already conducted by the Plamondon Development Team, PHP (Plamondon) is confident that the buildings to be demolished are ‘non-contributing’ historically, and fully satisfy the criteria in Section 423 of the LMC (city law) for demolition.” How wrong can you get? The Tannery has been declared historically contributing by the City Historic preservation Commission in a seven to zero vote and they also voted that it was of “unusual importance.” That view was also expressed by the state historic preservation officer Elizabeth Hughes who found the tannery, the last in the state, not only ‘contributing’ but eligible for listing on the National Register of Historic Places. You have to wonder what Mr Plamondon’s “extensive historical studies” comprised. He paid people to write such nonsense? The City and Plamondon chose a most unsuitable site for a large Marriott. The project has been epically mismanaged from the get-go in 2009.

Bottom line - the streets of Frederick can't handle any more traffic volume in that area. This hotel is wrong for this location

The most devastating impact of building this hotel will be the grabbing of $31 Million of taxpayer cash to pay for 40% of the cost while the two families reap the profits and while many hundreds if not thousands of school children are forced to learn in trailer parks that once were schools,...caused by the unwillingness of county officials to just say NO to the developers when infra-structure doesn't meet the needs of the citizens.....and who winds up paying to upgrade that infra-structure...the citizen taxpayers of course while the same developers run off to the next boondoggle...shameful!

Totally agree! As I have commented in the past, I never agreed to have my taxes increased or to be used for this project. It is shameful that the children of Frederick County will not have proper facilities because our tax dollars are being mis-used against our will.

If they were so concerned about the Tannery why haven't they done something to it in the last 50 yrs instead of let it rot away? The only reason they are making a big deal about it now is because they don't want the hotel.

I've seen this building up close, it's a mess and barely standing. Lets be realistic, even if it was restored people aren't going to be visiting Frederick to see a little Tannery building.

I would be interested in opening the tannery business up again; but I fear I would not be able to get the citizens to supply the required business in order to be successful.

Since tanning is out of style, tourism is in style, and history is a partial draw to Frederick at this point, perhaps a portion of the hotel could be constructed in such a way to include some rooms from the old building that would be a topic of interest with its own entrance to the walk. Perhaps Tannery Brewery.

Other buildings in Frederick have been transposed to uses that are actually current to our lifestyles.

People against the hotel project are using every possible reason they can to stop cease and desist progress.