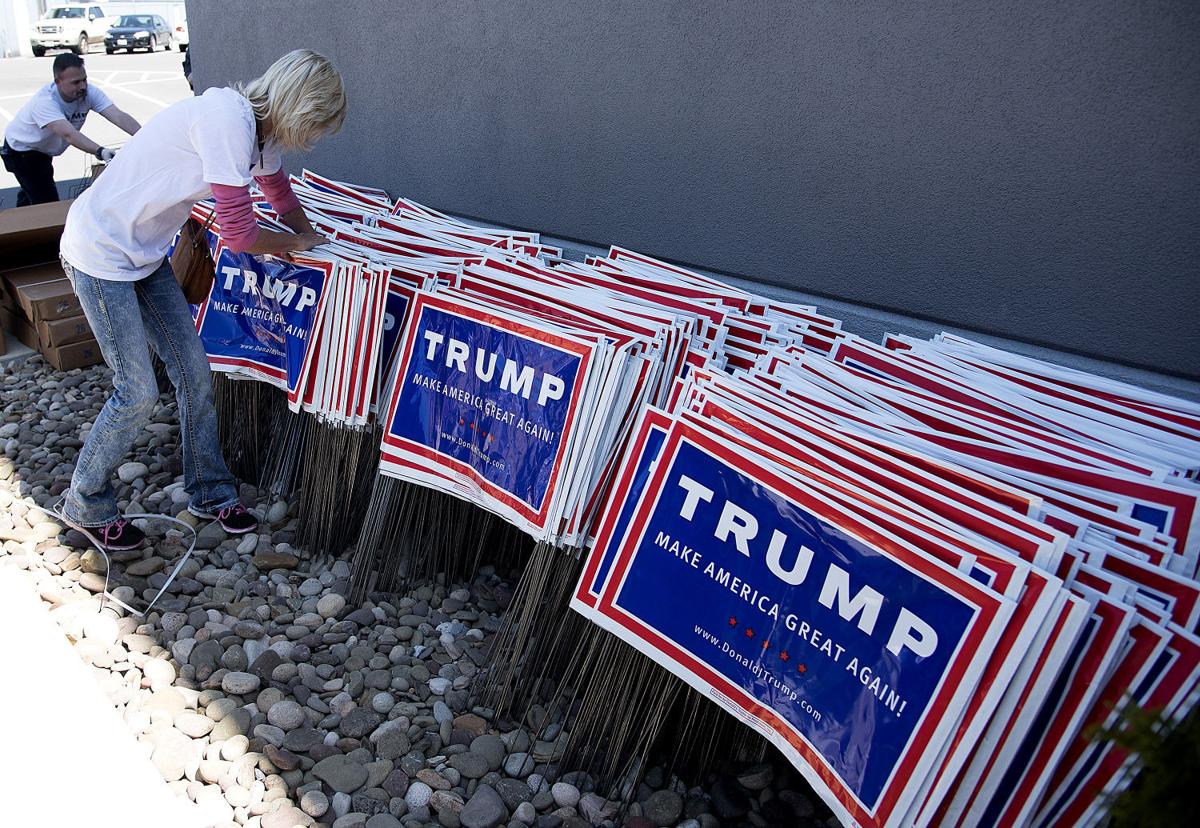 Trump signs at a campaign rally for Donald Trump at Hagerstown Regional Airport in April. The Frederick County Republicans had originally planned on lending the Trump campaign nearly $12,000 to make more signs. 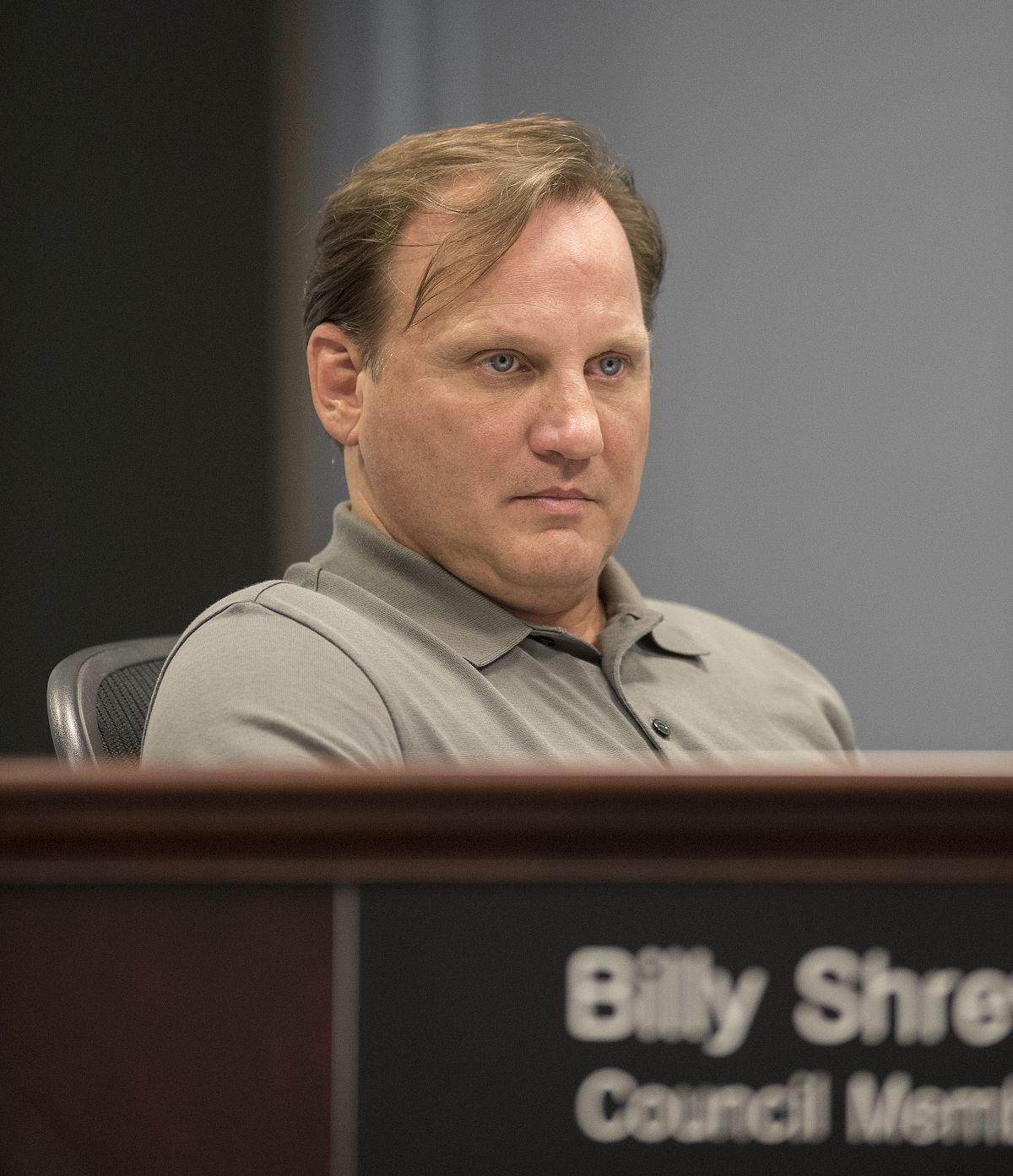 Trump signs at a campaign rally for Donald Trump at Hagerstown Regional Airport in April. The Frederick County Republicans had originally planned on lending the Trump campaign nearly $12,000 to make more signs.

The Frederick County Republican Central Committee was planning to lend thousands of dollars to Donald Trump’s campaign in Maryland, where the billionaire presidential candidate faces long odds of winning.

The committee's chairman, Billy Shreve, said the planned expense was canceled. But while it was considered, the nearly $12,000 loan would have represented a significant majority of the committee’s coffers, campaign finance and central committee records show.

Instead, the Maryland Republican Party picked up the expense — because the donation would have violated Federal Election Commission rules. The county central committee made an initial payment, later refunded, without registering an FEC number and without disclosing the expense within the federal campaign finance reporting system.

“I told them, ‘No, you can’t do it,’ so we did it,” said Joseph C. Cluster, executive director of the state party, who was recently sworn in as a state delegate for Baltimore County.

The proposed loan represents a clash between two of Shreve’s roles: central committee chairman and co-chairman of the Trump campaign in Frederick County. He is also an at-large member of the Frederick County Council.

Coffers down from last year

Among those expenses was a planned payment for “printing of Trump signs” of $5,888.

State finance records also show that a $6,000 check from the county central committee had already been delivered to an Ellicott City sign-maker in late July.

If the full amount of the loan had gone through the county central committee, the organization would have had about $1,770 in the bank, down from $16,305 at the start of the year, records show.

Shreve said this month that loans to the Trump campaign never went through, despite the state finance report showing the expense.

“We were going to lend them money and then get reimbursed, but it didn’t end up happening that way,” Shreve said.

He said if the committee’s coffers dropped to below $2,000, he would not have been concerned because the committee should spend money to support candidates in an election year.

Shreve said the Trump campaign planned to fund a Maryland operation in September. He wanted to use the county committee’s money to start printing signs before then.

He said the loan fit into the central committee’s goal of helping Republicans win, all along the ballot.

“The goal is to get people elected,” Shreve said.

Messages with three members of the Frederick County Republican Central Committee were not immediately returned on Wednesday evening.

Shreve said a majority of the central committee -- in an email vote -- voted to approve the initial expense, though he did not know the vote count.

The women’s club printed a popular two-sided handout that features Trump and his running mate, Mike Pence, on one side and each of the local Republican candidates in the Nov. 8 election on the other.

“It’s been one of the best campaigns ever in terms of party unity,” Shreve said.

After fundraising at The Great Frederick Fair and the cancellation of the loan, the central committee’s finances may be substantially increased.

The fair, which was in September, may end up being the committee’s largest moneymaker this year.

“It should have been our biggest fundraiser of the year, for sure,” Shreve said.

Earlier this year, the committee canceled the annual Lincoln-Reagan Day dinner, which typically would be the biggest fundraiser of the year, and replaced it with a Free Speech event at Flying Dog Brewery.

Contributions from that event have not yet been reported through the state’s campaign finance system.

The next campaign finance report is due Oct. 28.

Shreve said the report will reflect the full $6,000 refund.

The state committee’s contribution for the Trump signs is already reflected in the organization’s September monthly report to the FEC.

Cluster said before learning of the Frederick County central committee’s planned loan, the state did not plan to make those or any similar expenses. They are the only payments the state party made to directly benefit the Trump campaign this year, he said.

“It was something people wanted, so we went ahead and did it ...,” Cluster said. “Look, central committees — sometimes they get excited about things.”

This story has been updated to clarify that the Frederick County Republican Central Committee voted by email to approve the initial expense to purchase sign materials.

It's not surprising that dimwit shreve screwed up here. It's also not surprising that, moron he is, supports moron trump. As a republican, I'd like to sarcastically thank billy and other republicans who fell for trumps Jedi mind tricks that voted for him to be our nominee. Thanks for getting Hillary elected! The man never had a shot of winning. He's the candidate that Hillary Wanted to run against.

Thought it was telling that no other committee members chose to comment. Looks like they're realizing their leader is a loser.

And that's all the money they can raise? I know of a much smaller, less public group that can raise more than that. [wink]

It appears that Billy intended to violate the Federal Election Commission rules, as he did not register the donation and get a FEC number. Instead, Billy made the donation, did not disclose it and was saved by the Maryland Republican Party. So, Billy either deliberately ignored the election rules or violated them in ignorance.

"Instead, the Maryland Republican Party picked up the expense — because the donation would have violated Federal Election Commission rules. The county central committee made an initial payment, later refunded, without registering an FEC number and without disclosing the expense within the federal campaign finance reporting system."

Remember, he wanted to be the leader of the Council.

Yeahhhh, leave the comments to Shreve....lol

You had to pay for that crap (signs, buttons, hats, shirts)??

Paying for a political sign???[huh]

only Republicans pay for stuff that should be free...I got all my Obama signs for free...then again I am not a Republican.

Made me wonder too, I have some signs, never paid anything, the candidates committee was happy to give them out.

It is called the Trump fraud game, all of his supporters are allowed to play the game. [crying]

Remember, this is Billy "do whatever you want as long as you don't get sued" Shreve

Also makes complete sense as to why Billy is a Trump supporter...this story explains it clearly...ignorance is indeed a virtue...

Since when has Trump paid any of his loans off...what gets me is that Shreve was stupid enough to think that the Trump campaign would pay them back......what world does Shreve live in? Once again the Republicans demonstrate their lack of intelligence....didn't Bobby Jindal say that the GOP "must stop being the stupid party" ...well Bobby hate to break it to you but the Republicans are still the stupid party. [wink][wink][wink]

Deplorable Billy expected
Trump signs get down ballots elected
he didn't foresee
that voters would flee
the party that Donald's infected.

Surely your Nobel Prize can't be far away. Dylan stole it from you. Hold on to your frequent flyer miles for that flight to Sweden.

Billy once again showcases his ability and knowledge - NOT!

".....the donation would have violated Federal Election Commission rules. The county central committee made an initial payment, later refunded, without registering an FEC number and without disclosing the expense within the federal campaign finance reporting system." That says it all. Once again Billy is either a moron or corrupt. With as much political experience he allegedly has he either learned nothing from it or he willfully attempted to misuse funds. I can only hope that FC voters show their displeasure at his ongoing behavior when his term as a member of Council is up.

Shreve's terrible blunder seems to have forced the State Republican Party to squander $12,000 to bail him and the the local Committee out of a tight spot. I say "squander" because Shreve apparently thought it was a good idea to spend $12,000, a huge percentage of the local Committee's wealth, on the Trump campaign in a state where Trump has virtually no chance of winning, even if he were ahead in the polls, and where the results will have no real impact on the national outcome (due to the Electoral College system), all seemingly just to make himself look good as the local Trump Chairman. This is unusually bad judgment, even for Shreve.

Are you sure it's "either"? It might be both!

Bst, I am pondering this; "Billy is either a moron or corrupt." At first, my thought says moron, then I think about some of the things Billy has done and it changes my mind. But who knows for sure? [unsure]