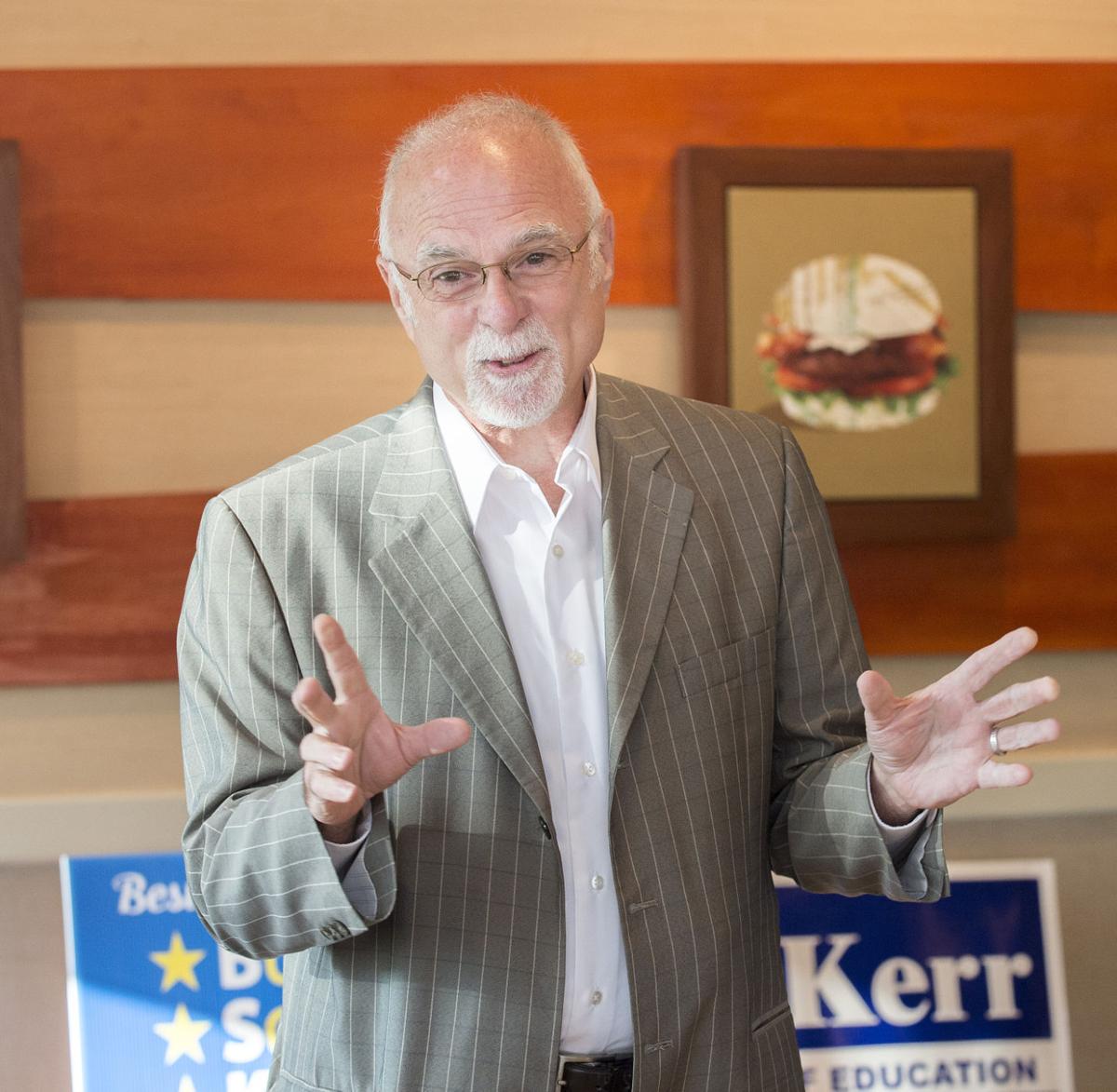 Ken Kerr, a candidate for the Frederick County Board of Education, speaks to a group. 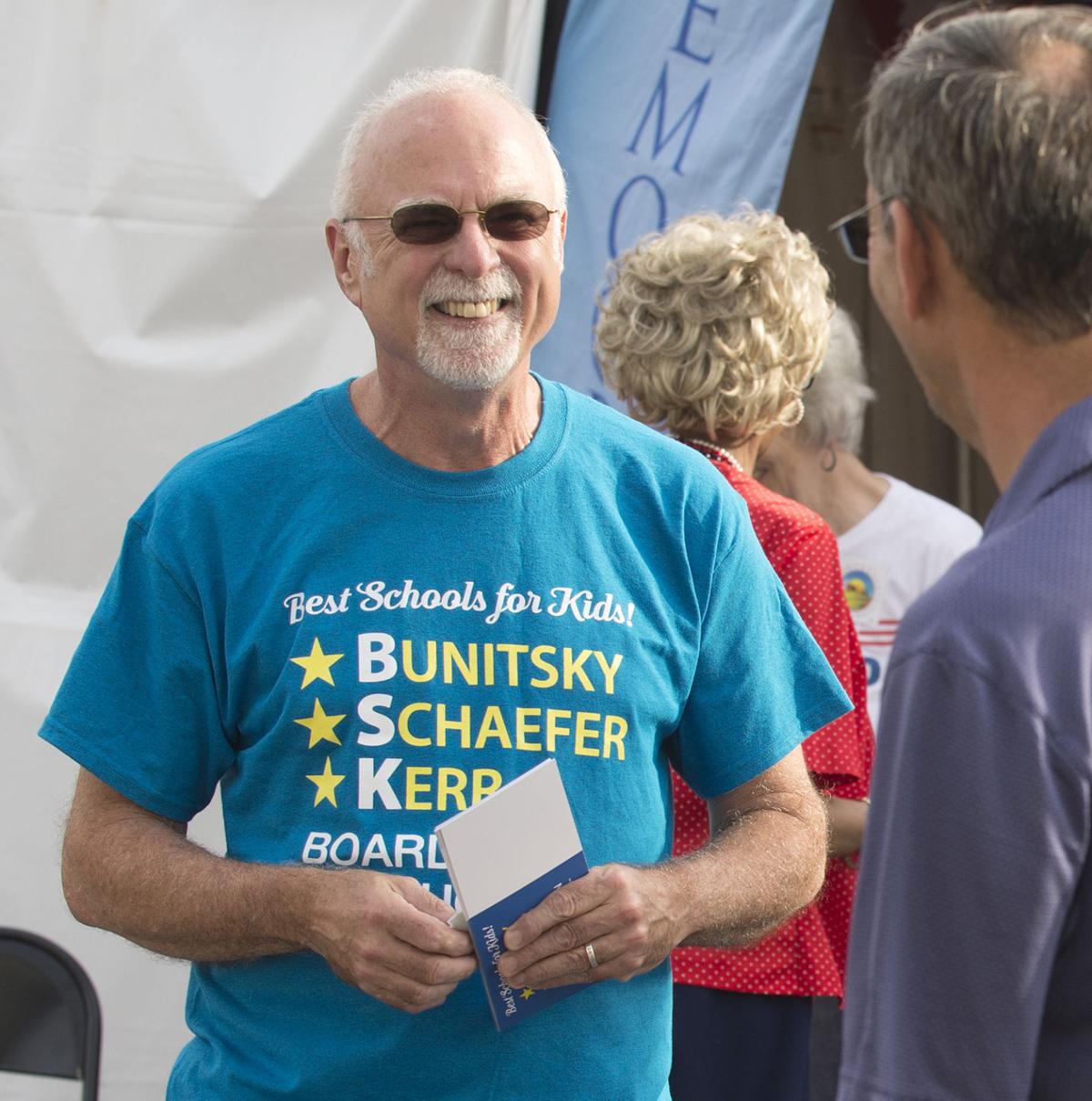 Ken Kerr, a candidate for the Frederick County Board of Education, speaks to a group.

Whether he’s working on the state’s higher education regulations or mastering a Pink Floyd song for his rock ‘n’ roll band, Ken Kerr said he delivers what he promises.

['In the Booth' politics podcast with Ken Kerr]

The longtime Frederick Community College professor, now chairman of the English department, believes in proving his reliability to his peers and forging steady connections to accomplish his priorities.

He works slowly to demonstrate credibility, by listening and attending meetings on time, he said. His style isn’t bombastic or demanding; it’s collaborative and soft.

As he enters his second run for the Frederick County Board of Education, vying for one of the three open seats, the prospect of lobbying for changes excites him, even if the work is complicated once he’s delved into the specifics.

Kerr, a soft-spoken man with narrow glasses and a white goatee, earned his bachelor’s degree in music from Hood College in the 1980s, with little intent in his life but to play music. He said he was afraid to move to New York, Los Angeles or Nashville.

As an adult, he plays in a band, The Nightcrawlers, a play on the well-known Nighthawks. At 59, Kerr is the youngest member of his band. The keyboardist recently took time off because he’s getting a knee replacement.

But in his 20s, he and his wife, whom he met at FCC, were married. When they had a child on the way, Kerr realized he needed “a big-boy” job that would supply health insurance for his wife.

When Kerr arrived home one day, his wife told him that she found Kerr a job through Frederick County Public Schools — either custodian or bus driver.

“She had called around all day asking where I could get health insurance in 60 days,” Kerr said.

He picked driving a bus.

Shortly after, he moved into the classroom and became a fourth-grade teacher, for just two years.

While Kerr always enjoyed teaching, he didn’t envision spending the decades until retirement with 10-year-olds, he said.

Once again, he switched career paths. Personal computers were on the rise at that time, the late 1980s, and he decided to dabble in the technology industry like many of his friends.

He took odd jobs helping to train customers on new software his company was developing.

Kerr found himself gravitating back to teaching, he said. By then, he had discovered his skill as a writer and went to Towson University for a master’s degree in professional writing.

Though his bank account was robust, the work in the tech world never satisfied Kerr, so he left the company.

But, he added ruefully, his company was bought by what is now the education giant Sylvan Learning. Many of his friends became millionaires.

In a recent interview, Kerr said he regretted leaving his elementary school job early. Bouncing around in careers messed with his retirement timeline, he said.

He tried teaching again, this time with community colleges. He bounced around to colleges among Washington, Cecil and Harford counties, and landed at FCC.

His job there was “heaven,” he said. Kerr visited campus even on days he didn’t teach. He simply stayed in his office, organizing and filing.

Kerr said he didn’t restrict himself to merely his classes. He would take up roles with a number of state and national associations, such as with the Maryland Higher Education Commission and the Mid-Atlantic College Reading Association.

With his help, FCC revamped its general education program, and most recently, Kerr was temporary dean of arts and sciences there.

As a teacher, he tries to constantly tweak lessons that become outdated or no longer attract interest.

His most recent innovation is a popular trend among public and college teachers. It’s called a flipped classroom, in which the instructor bucks a traditional lecture in favor of assigning work that students do independently, but that he facilitates.

Working most often with college students, Kerr said he tries to ensure that the lessons of graduating high school students align with those of the curriculum at the community college. More advancement has been made on that front, with FCC classes being offered at all 10 county public high schools.

One of his proudest achievements was a change that likely went unnoticed outside of the education sphere. It was a rewrite to Maryland regulation of what redefined what mathematics courses a student might need to take.

Most candidates in a school board election tend to focus on students in kindergarten through grade eight, with the assumption that once they reach high school, they no longer need help.

He has observed through the years how students graduating from high school would need remediation depending on the prevailing pressure from the state or federal government to focus on a certain subject. One year, it would be reading, the next year something else, he said.

Admittedly, he said, his passion for adolescents’ education may not translate as well for voters. He’s not sure how it will resonate with them.

When Kerr ran the last time, in 2014, he was 43 votes behind April Miller for a final board seat. He appeared to win on election night, but lost when provisional and absentee ballots were fully counted. That frustrated him.

He’s been active in local politics for more than 25 years and wants to be part of drafting policy, rather than be a sideline advocate.

The last time Kerr ran, he said, much of the debate centered on charter schools, as well as the state’s version of the Common Core Standards and the related exam, the PARCC, known formally as the Partnership for Assessment of Readiness for College and Careers test.

Now, he had to focus his research on school construction dollars, teacher retention and the budget.

Kerr takes issue with the Common Core Standards, even though it’s not longer a burning topic. They were developed by a big corporation, Pearson, that now reaps the money and benefits, Kerr said.

“The standards don’t promote homosexuality and ungodliness, or something like that,” Kerr said. “And they’re not those silly math problems people post to the internet. That was just a school system’s local curriculum and how it was built. But it was built by a lot of people who sell textbooks and sell tests.”

To develop great educational standards, pinpoint the strongest students in a class and determine what works best for them, he said. Buying a test and “artificially” deciding what works, with a test that the state buys, seems “fishy,” he said.

Even though federal law requires that students be tested every year in grades three through eight and in high school, Kerr said he would like to see that reduced to a sample that would provide the school district what it needed to show who was on track.

“But I’m not a single-issue candidate,” Kerr said. “I don’t have one specific issue that I’m advocating as my cornerstone of my candidacy. My motivation is to keep the schools healthy and strong, to make sure we’re doing the right thing.”

Ahead of the 2016 general election, The Frederick News-Post is hosting a politics podcast series called “In the Booth."
To hear extended candidate interviews, go to FNPpodcasts.com or subscribe through iTunes or Google Play.

My spouse and I have knows Ken for many years. I wouldn't put an ADD label on him; he's just a genuine Renaissance Man, a modern day Leonardo DaVinci, who is educated and has skills in numerous fields including construction, cooking, music, pond building, to name a few. He is multilingual having spent a sabbatical living and working in South America. He is genuinely skilled in handling complex issues in education. Has spent a career making a difference in the lives of students. People underestimate his accomplishment regarding changing COMAR's college math requirements which will result in many more college students being able to complete their college degree without having to take so many remedial math courses. And on top of it - he's a nice person - probably his biggest liability in today's political world.

I love this kind of background, maybe it's indicative of ADD, but it gives him a broad familiarity with different situations among voters. Adolescents are our future. And Pink Floyd's a fave!

There is simply no one more qualified or more appropriate to serve on our School Board. I hope that everyone takes the time to vote, and to vote for Dr. Kerr.

"Public Education is a time-honored profession. It's to be protected and nurtured, not dismantled and weakened. We need people who will be vigilant in the defense and care of this cornerstone of Democracy."
~ Dr. Ken Kerr

Wow, a candidate that sees education and educators as a valuable asset. Seems like a no-brainer for this candidate to be elected.