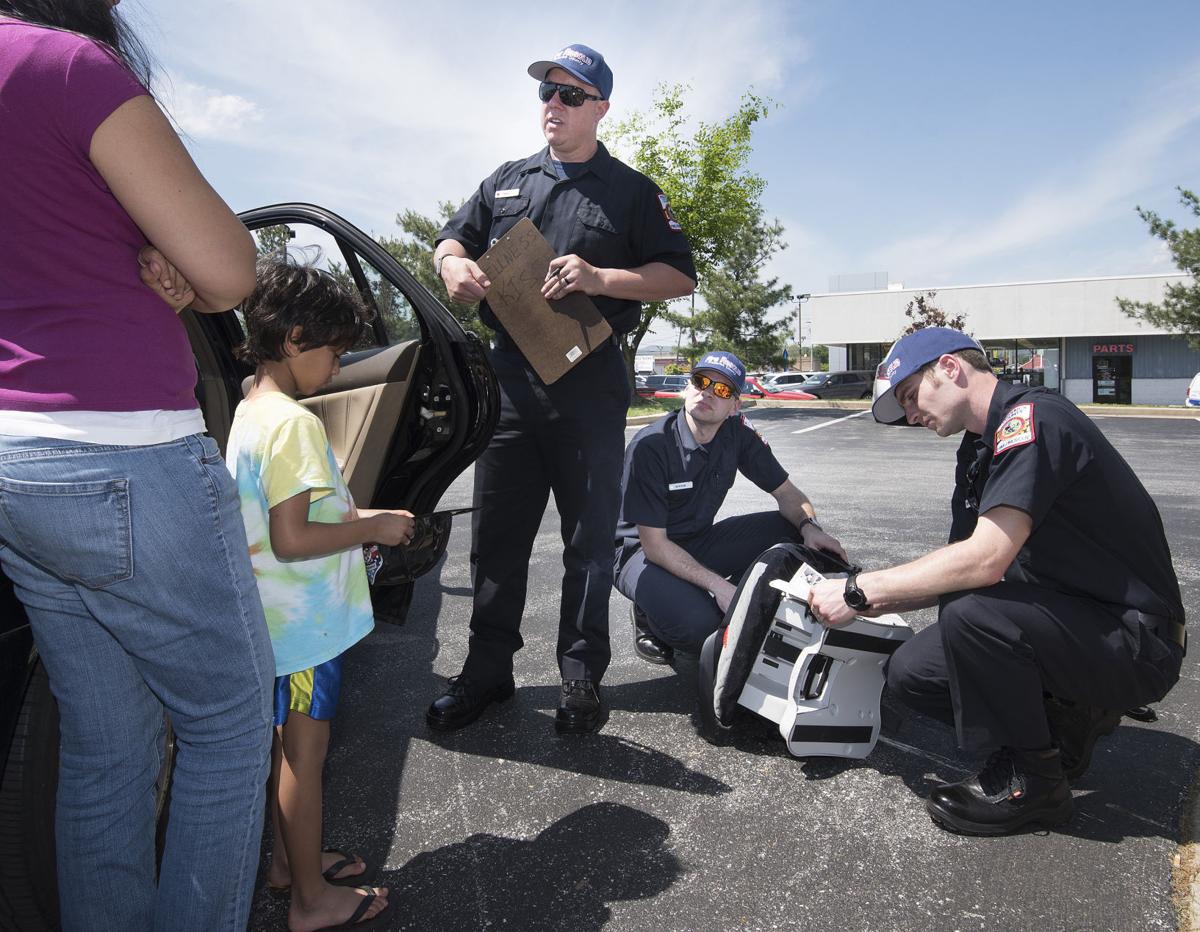 Fire Academy recruits, from left, Edward Hall, Jeffery Hunter and Joseph DiMartino do a safety check on a child safety seat for Anitha Yerrabelli and her 5-year-old son. 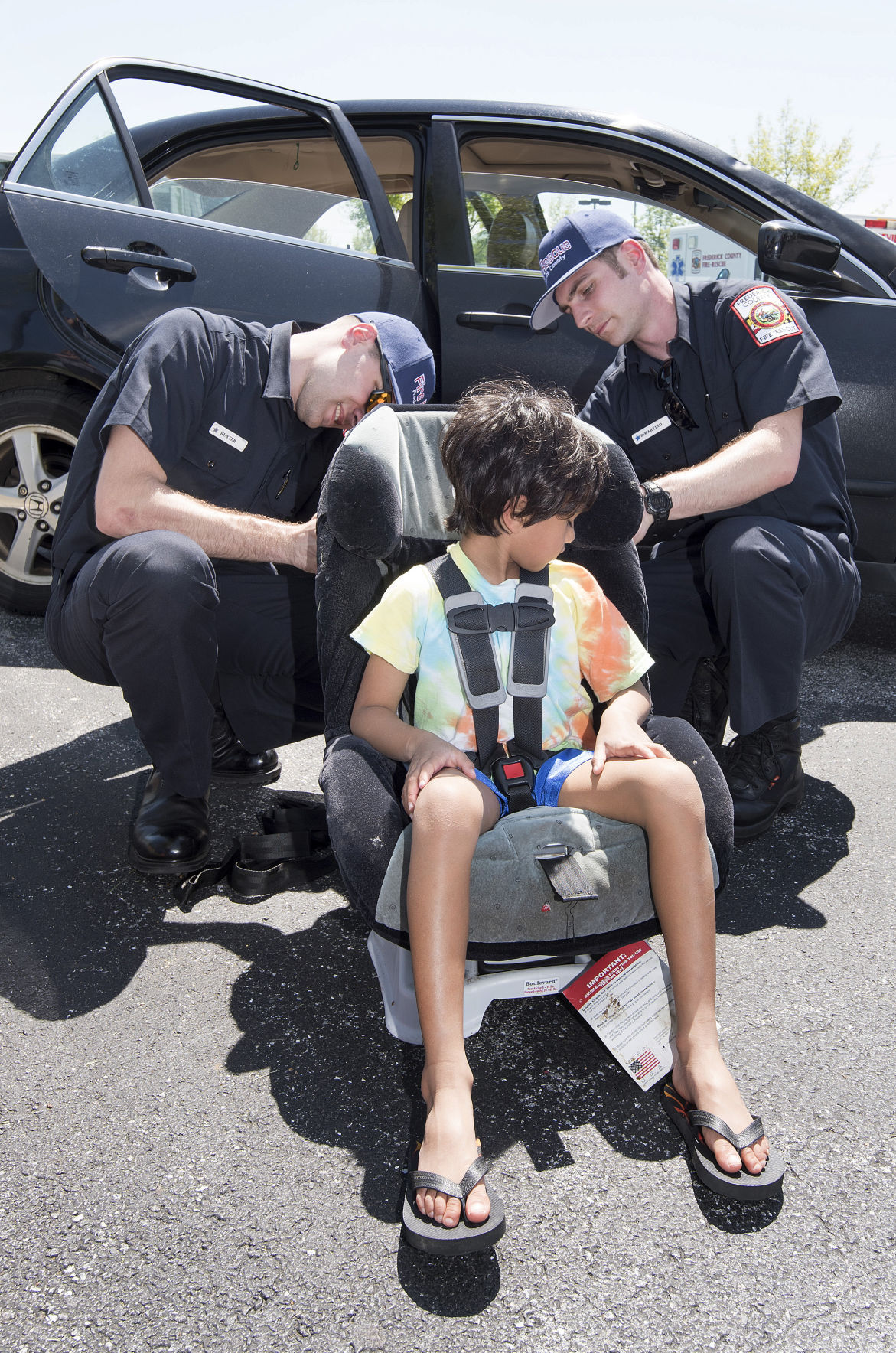 Fire Academy recruits, from left, Edward Hall, Jeffery Hunter and Joseph DiMartino do a safety check on a child safety seat for Anitha Yerrabelli and her 5-year-old son.

Frederick resident Kelly Imber smiled nervously as she stepped out of her minivan at Friday’s child safety seat inspection checkpoint on Buckeystown Pike.

“This is for the safety seat inspections?” Imber asked as a group of no less than six Frederick County fire recruits surrounded her minivan holding clipboards.

Wading through the crowd, Battalion Chief Troy Grossnickle introduced himself and the eager faces of firefighter academy Class 21 recruits craning their necks over his shoulder.

Having just wrapped up their nine-week course for emergency medical technician training, the recruits of Class 21 seemed excited to be out of the classroom, even if car safety seat inspections weren’t as thrilling as running exercises in the training facility’s burn building or learning rope rescue techniques at Pinecliff Park.

“Usually the first question we ask in this course is ‘Does anyone have any kids?’” Grossnickle said of the car seat class. “They’ll raise their hands and roll their eyes, because anyone who’s a parent has been through this with car seats. But, by the end of the class, you’ll ask them what they thought and most of them will admit they never realized they’ve been doing it wrong.”

To their credit, even the recruits without children jumped into the class with the same enthusiasm as they would for a more conventionally exciting subject.

Recruit Lauren Lum said she was initially motivated by the fact that, after learning about the issue in class, she and her fellow recruits would be responsible for teaching parents how to install the seats.

Later, as the class progressed, Lum said she was surprised by how in-depth and complex the different systems were for different seats. Even the type of vehicle and seat-belt latches — which Lum assumed were more-or-less standard — could also play a factor in how any given seat should be installed.

“Honestly, I thought it was as simple as, you put the seat in there and you just buckle it through and that was all there was to it,” Lum said. “But each seat is different ... Some of the systems are vehicle-dependent, so you have to think about all those factors, as well as what’s going to be best for the parents and the child.”

Under Maryland law, children under 8 years old must be secured in a federally approved child safety seat unless the child is at least 4 feet 9 inches tall.

While many first-time parents — and more than a few of the more experienced parents — approach the issue with the same mindset that Lum did, assuming all seats are pretty much the same, a visit to a car seat installation checkpoint can be an eye-opening experience.

“I’ve always meant to get out to one of these because we’re driving on [Interstate] 270 all the time,” Imber said. “We’re going the speed limit, obviously, but it still drives me crazy with worry.”

That’s why, when Imber’s mother spotted signs for the checkpoint and told her daughter about it, the Frederick resident and mother of four boys decided to drive out to the checkpoint in the Lowe’s store’s parking lot on Buckeystown Pike.

Even though her husband had repeatedly told her not to worry about the seats, Imber said she just wanted to be sure.

“Was it installed correctly?” Imber asked, taking the paperwork to sign after the recruits finished with her installation a few minutes later.

“Yes, actually, it was fine,” Grossnickle replied. “We just made a couple of small adjustments, then we’ll get it put back in for you. You can actually step over here to watch, if you’d like. They can tell you what they’re doing.”

Imber smiled, shaking her head as she thought ahead to the conversation she would have later with her husband.

“I just know it, he’s going to say, ‘I told you so!’ and I’m going to have to admit he did it right,” she said with a laugh, while admitting that she was relieved to know the seats were put in correctly.

“It’s still a good thing that you came out to get it checked,” the chief said. “Just in case.”

“Besides, we don’t have to tell him that,” Grossnickle added, turning back with a smile of his own. “We can just say you got some good pointers.”