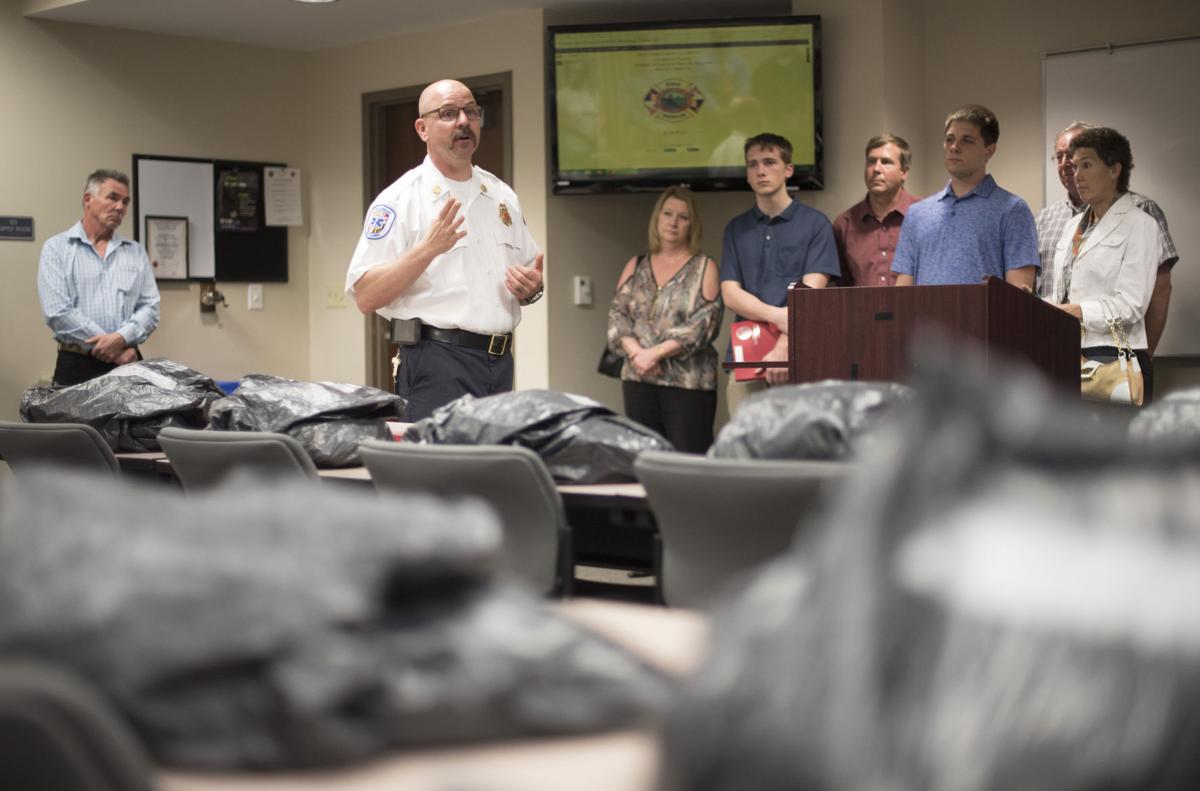 Capt. Lenne Stolberg provides a tour of a classroom during an orientation meeting Friday for recruits and their families. Members of the incoming Recruit Class 22 will spend much of the next 5½ months studying there. 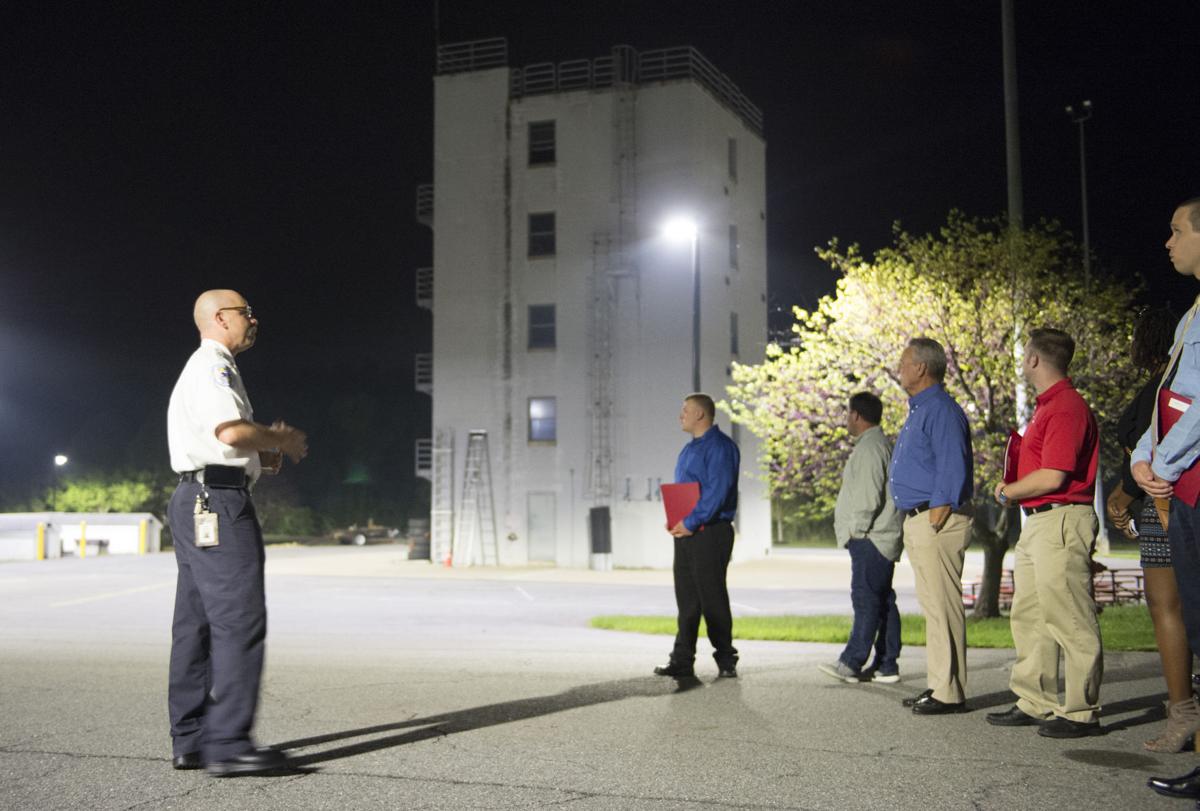 Capt. Lenne Stolberg takes members of the incoming Recruit Class 22 and their families on a tour of the training grounds Friday night during an orientation meeting.

Capt. Lenne Stolberg provides a tour of a classroom during an orientation meeting Friday for recruits and their families. Members of the incoming Recruit Class 22 will spend much of the next 5½ months studying there.

Capt. Lenne Stolberg takes members of the incoming Recruit Class 22 and their families on a tour of the training grounds Friday night during an orientation meeting.

In his address to members of Recruit Class 22 and their families last week, county Fire Chief Tom Owens highlighted the importance of a strong support network for each of the 21 young men in the coming weeks.

“They will need your understanding, because your normal family routine will be very different for the next five and a half months,” the chief told the crowd gathered in the main classroom of the Frederick County Public Safety Training Facility for “Family Night” at 7 p.m. Friday. “And recruits fail because of a lack of family support.”

Owens specifically mentioned Recruit Class 21, which entered its 21st week Monday and is scheduled to graduate June 9. That class, which began Dec. 5 with 24 recruits, lost its first — and so far only — recruit back in February during that class’s 42nd day of training, Owens said.

While the relatives of the latest crop of recruits were treated to hors d’oeuvres, a tour of the facility grounds and a lighthearted introduction from Capt. Lenne Stolberg, the county training facility’s recruit coordinator, the main purpose of Friday’s gathering was to brief the families and loved ones of the recruits on what to expect.

Early on in their remarks, Stolberg and Owens reviewed the chain of command for the incoming class, sharing both Stolberg’s phone number and that of Lt. Bob McCaa. As Class 22’s lead instructor, McCaa will be the only person authorized to carry a phone from 7 a.m. to 3:30 p.m. once training begins Monday.

As the evening continued, Lt. Kathleen Harne took the lectern to go over a list of different stressors and warning signs that relatives could look for to gauge the mental states of their recruits.

“They’re depending on you to be their litmus tests, you need to keep an eye on them and make sure that they’re the same person that you sent off to recruit school,” Harne said.

Along with obvious signs like an increase in moody behavior or the recruits becoming more argumentative, Harne asked the crowd to keep an eye out for more subtle signs of stress, such as changes in a recruit’s sleep or eating habits.

She advised the crowd not to be afraid of broaching any concerns with the recruits early and often.

“We are relying on you, because obviously we don’t go home with them,” Harne said, encouraging the group of relatives and spouses to consider calling Stolberg or McCaa if problems persist.

Far from compounding the concerns of family members, the frankness and candor of the presentations Friday evening did a lot to dispel fears, said Michelle and Bob Buchspics. The couple’s son, 24-year-old Shane Buchspics, was set to begin his journey with Class 22 on Monday.

“They did a really great job. It set my mind at ease,” Michelle Buchspics said. “I was concerned, especially with the physical aspects of the academy, as I think any mother would be.”

Anticipating his parents’ concerns, Shane, who hails from Scranton, Pennsylvania, said he also did his best to put their minds at ease before family night.

When his mother expressed concerns over physical training, for example, the eager recruit showed her a story published previously in The Frederick News-Post’s series covering training for Class 21 that detailed some of the safety measures in place at the academy.

“He was able to show me how they each put these vests on to keep monitoring their heart rates and stuff like that,” she said. “They’re very impressive here, and they really seem to be genuine, so that made me feel a little bit easier coming in.”

Somewhat ironically, several incoming recruits in Class 22 mentioned the physical training that awaited them in the academy as something they were particularly looking forward to.

“I guess everybody wants to get in shape, you know?” said recruit Brock Wilbur, a 26-year-old Baltimore resident, when asked why he thought PT was so popular for he and his fellow recruits.

When pressed, Buchspics seemed to reconsider how much he’s actually looking forward to PT.

“I don’t know if that will be as true come Monday,” Buchspics said with a chuckle, his eyes darting over to where McCaa stood in the hallway nearby.

As one of the men who will lead Class 22’s physical training next week, McCaa’s face remained almost eerily impassive as he listened to the group talk about what they expected from their first run.

Later, during a quiet stroll through the academy grounds, Stolberg briefly slipped out of the pleasant, affable demeanor he had adopted for his presentations to give the tour group a glimpse of the hardened Marine veteran who would be with McCaa every step of the way during physical training the following week.

“If any of you would care to stick around, we can take you up to the top of the hill your recruits will be running,” Stolberg said, eliciting a few nervous laughs from the parents as he gestured up the steep, imposing hill dotted with pull-up bars and other workout stations.

Stolberg next addressed the recruits directly, his face breaking into a sly grin.

“Because if you didn’t know it Tuesday, you’re going to get an introduction to physical training, and if that sounds fun, just hold on to that so you can get some sleep this weekend,” the captain said. “You’re going to need it.”