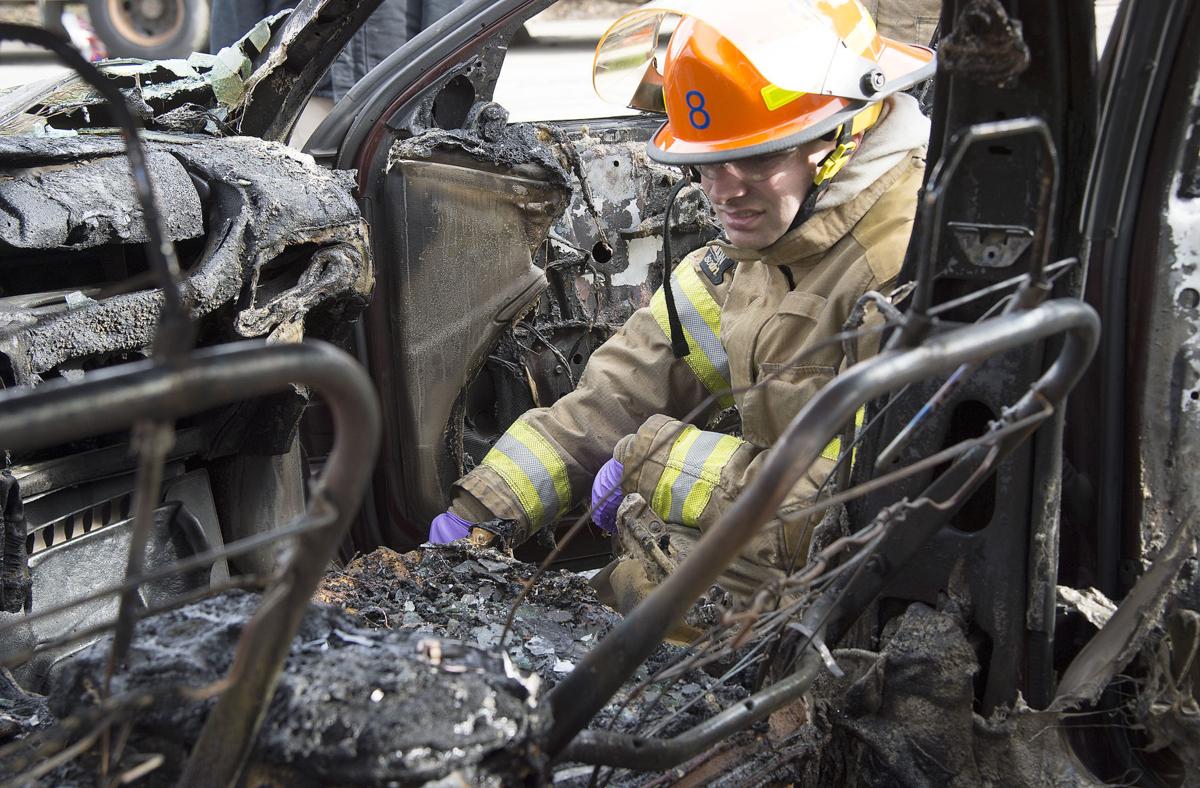 At the Frederick County Fire Academy, recruit Jeffrey Hunter examines a car that was set on fire with a Molotov cocktail. The recruits did not know how the fire was started and were challenged in this exercise to find the source. 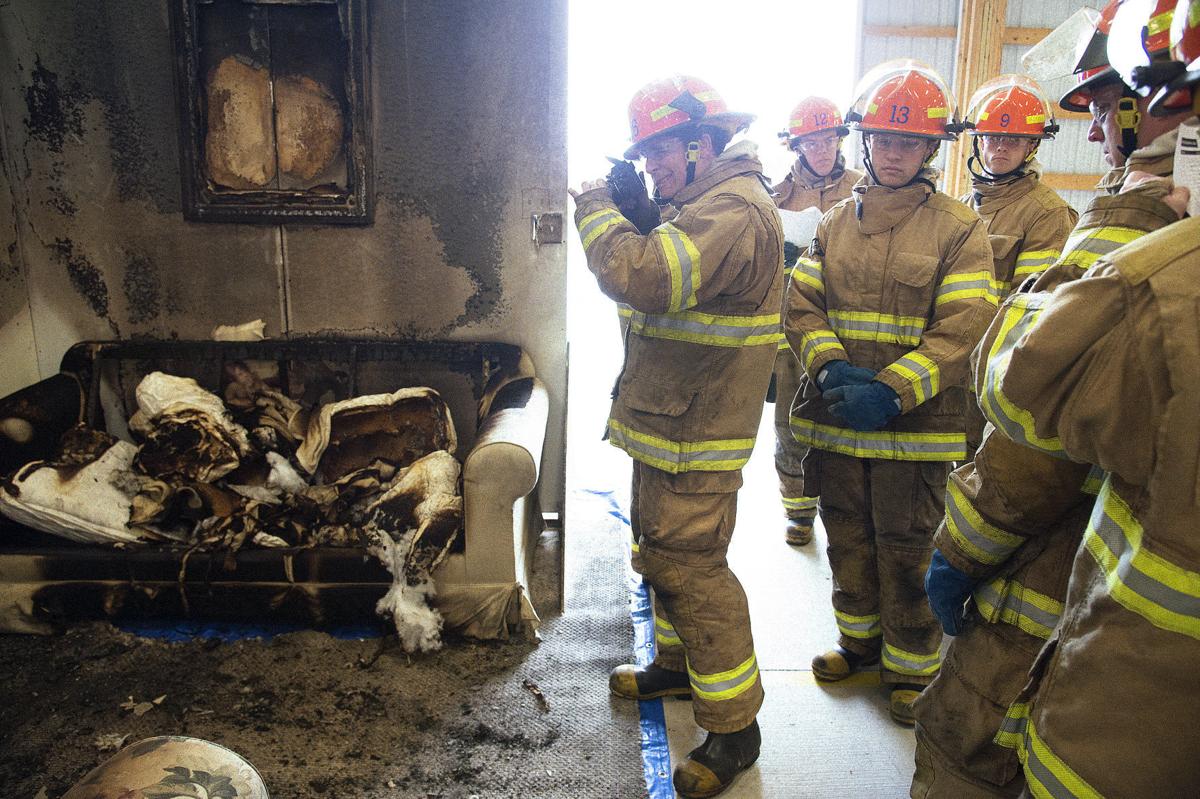 Fire academy recruit Zachary Mellin, center, takes photos of a staged fire scene Wednesday at the fire training academy. The recruits were challenged to find the source of several fires as part of an exercise to recognize the signs of arson.

At the Frederick County Fire Academy, recruit Jeffrey Hunter examines a car that was set on fire with a Molotov cocktail. The recruits did not know how the fire was started and were challenged in this exercise to find the source.

Fire academy recruit Zachary Mellin, center, takes photos of a staged fire scene Wednesday at the fire training academy. The recruits were challenged to find the source of several fires as part of an exercise to recognize the signs of arson.

The Frederick News-Post is following the men and women of Recruit Class 21 as they go through the Frederick County Division of Fire and Rescue Services’ six-month firefighting training academy. Stories will focus on lessons, skills and individual recruits as they answer the call to public service.

Recruit James Wardrick suddenly straightened next to a burned-out car on the fire academy’s training grounds Wednesday morning, raising a gloved hand to beckon his fellow recruits over to the window.

“Get the camera over here,” he said, his voice muffling slightly as he leaned back in through the rear driver’s side window. “I’ve got a Molotov cocktail under the seat. There’s a bottle with a rag in it, right here.”

Shuffling over to the opposite window, recruit Austin Nelson hefted the squad’s digital camera as Deputy Fire Marshal Eddie Ruch walked up to peer over his shoulder.

“Don’t move it, I’m coming!” Nelson said, his voice tinged with excitement. “Wardrick? Point to it.”

Up the hill, Class 21’s two other squads of recruits were making similar progress picking through a pair of faux fire scenes set up inside the training academy’s storage hangar. Each station presented a different scenario, complete with prewritten “interviews” with witnesses and victims for the recruits to read over while trying to determine how each fire started.

Each scene was set up in advance by trained Frederick County fire marshals, who burned the props elsewhere at the academy, said Deputy Fire Marshal Lt. Charles Green. While the vehicle fire was relatively straightforward, another burn in a mocked-up living room was intended to appear like an accident.

“This one here? The only way you’re figuring this one out is through interviews,” said Battalion Chief Kenny Poole, the county fire marshal, pointing at one of the setups. “You’ll list it as electric every day because of the way we were able to set it up.”

Later, after the squads of recruits has formed their conclusions about the fires, they will present their theories to the fire marshals before they are shown video footage of how the fires actually started, Green said.

“The key is to get them to recognize signs of an arson ... to determine, ‘Hey, this doesn’t look right,’” Green said. “We want them to be able to recognize these things and know when to call an investigator to the scene.”

By teaching the recruits how fire marshals go about investigating potentially suspicious fires, Green, Poole and Ruch were hopeful that the aspiring firefighters will also keep in mind the preservation of evidence at scenes while they are responding to fires.

For the purposes of the class, each group of recruits was set up as a team of junior fire marshals, Poole said.

“They’re going to see as they start moving stuff around that you can’t just go in like a bull in a china shop and start pulling stuff out, or they may destroy valuable evidence,” Poole said.

Across the hangar, recruits Timothy Kessler and Zack McNeil carefully moved the TV stand away from the wall in the living room scenario, allowing recruit Zachary Mellin to snap several photos of the wire leading into the TV.

Standing just behind Mellin, recruits Lauren Lum and John McNemar took notes and filled in the group’s sketch of the scene, respectively, while the remaining members of the group floated ideas about what might have caused the fire.

As Poole predicted, some of the recruits immediately erred on the side of an electrical fire.

“Was the wire melted at all?” one of the recruits asks the group.

“Not until it gets under the couch,” McNeil replied. “But we haven’t traced it all the way back yet.”

Back at the scene of the vehicle fire outside, the recruits of Squad 3 huddled around Ruch to debrief after tucking the Molotov fragments back under the driver’s seat for the next squad to find.

“Would you be able to test it on the scene to find out what could be in it?” recruit Trevor Snodderly asked when Ruch warned the group that, in a real investigation, they would have to test the bottle to make sure it was the cause of the blaze.

“No, it would have to go to the lab. Usually for us, that’s the state police lab in Pikesville,” Ruch said.

As the rest of the class nodded, recruit Tanner Sholley raised his hand with a sly smile, deciding to press their advantage for the purposes of the report they’d have to present.

“Well, did we get our lab test results back yet, sir?” Sholley asked hopefully.

“What? No!” Ruch said, laughing. “No way! That takes eight weeks, at least! There’s a backlog!”