You are the owner of this article.
Edit Article Add New Article
You have permission to edit this article.
Edit
Home
News
Opinion
Sports
Topics
Calendar & events
Classifieds & local
Features
Voters Guide
1 of 7 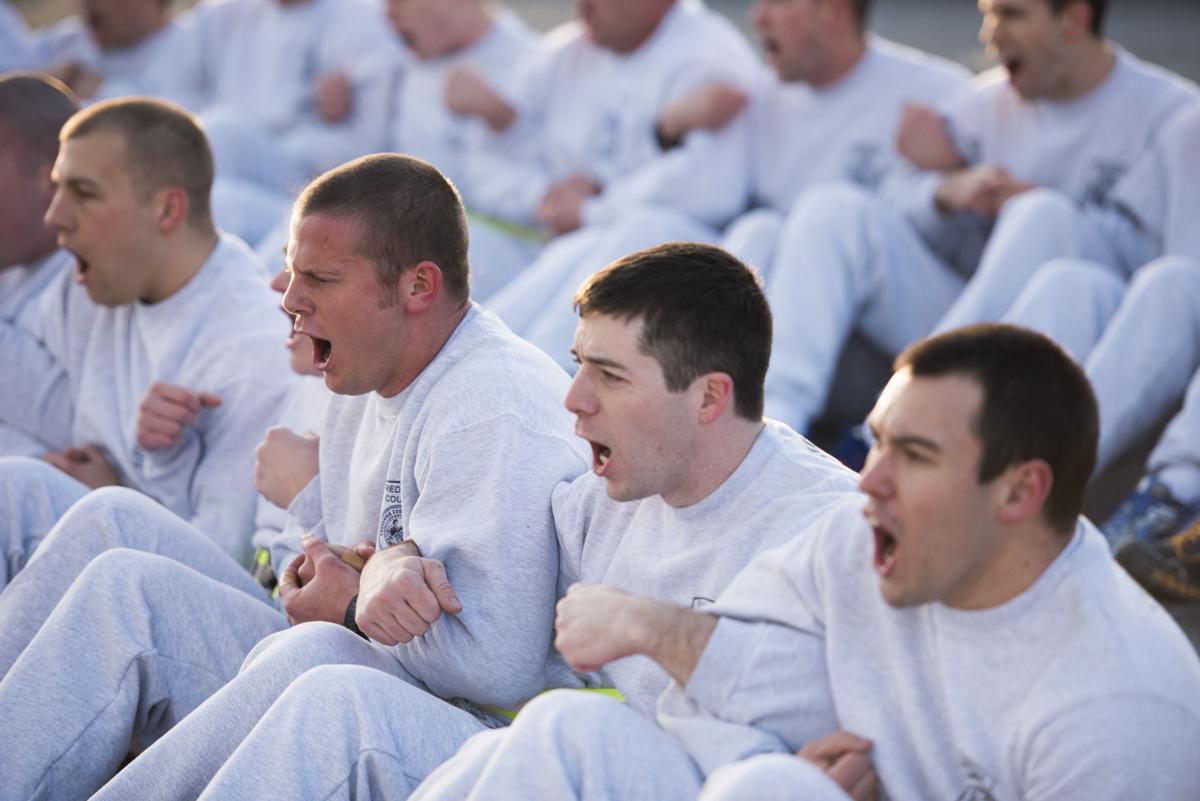 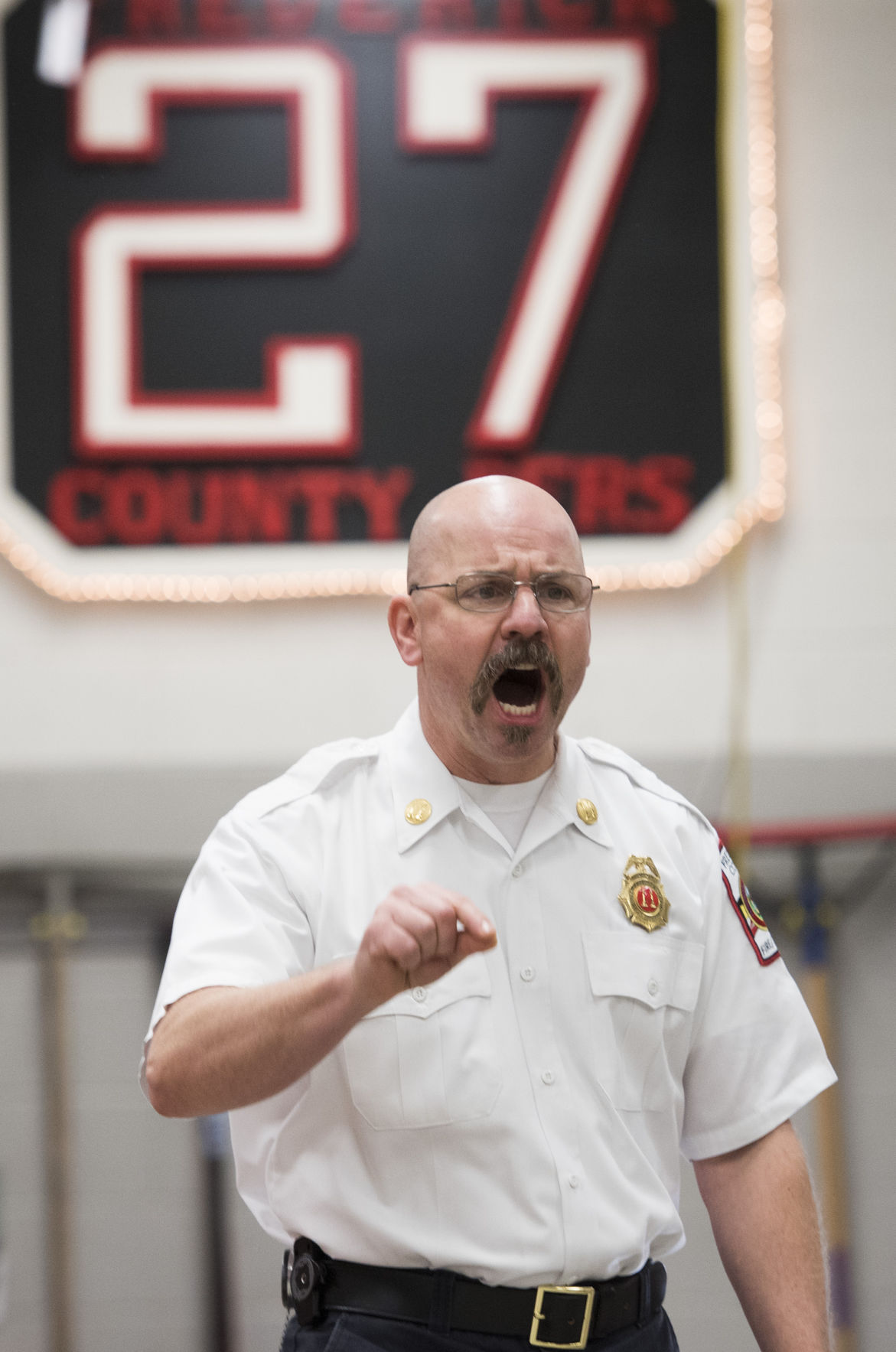 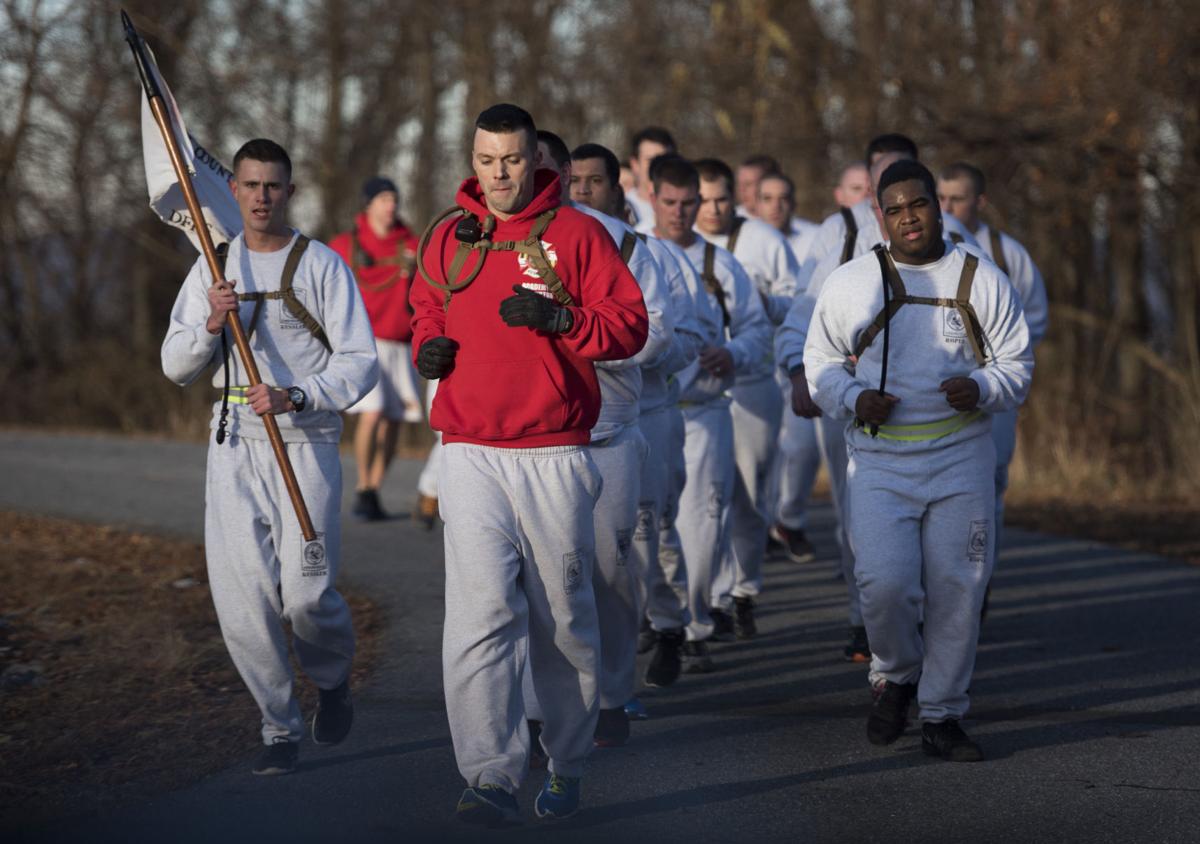 Recruits of Class 21 are led on a morning run by class instructor Lt. Mike Webb, a run which includes stops along the way for various physical training exercises. 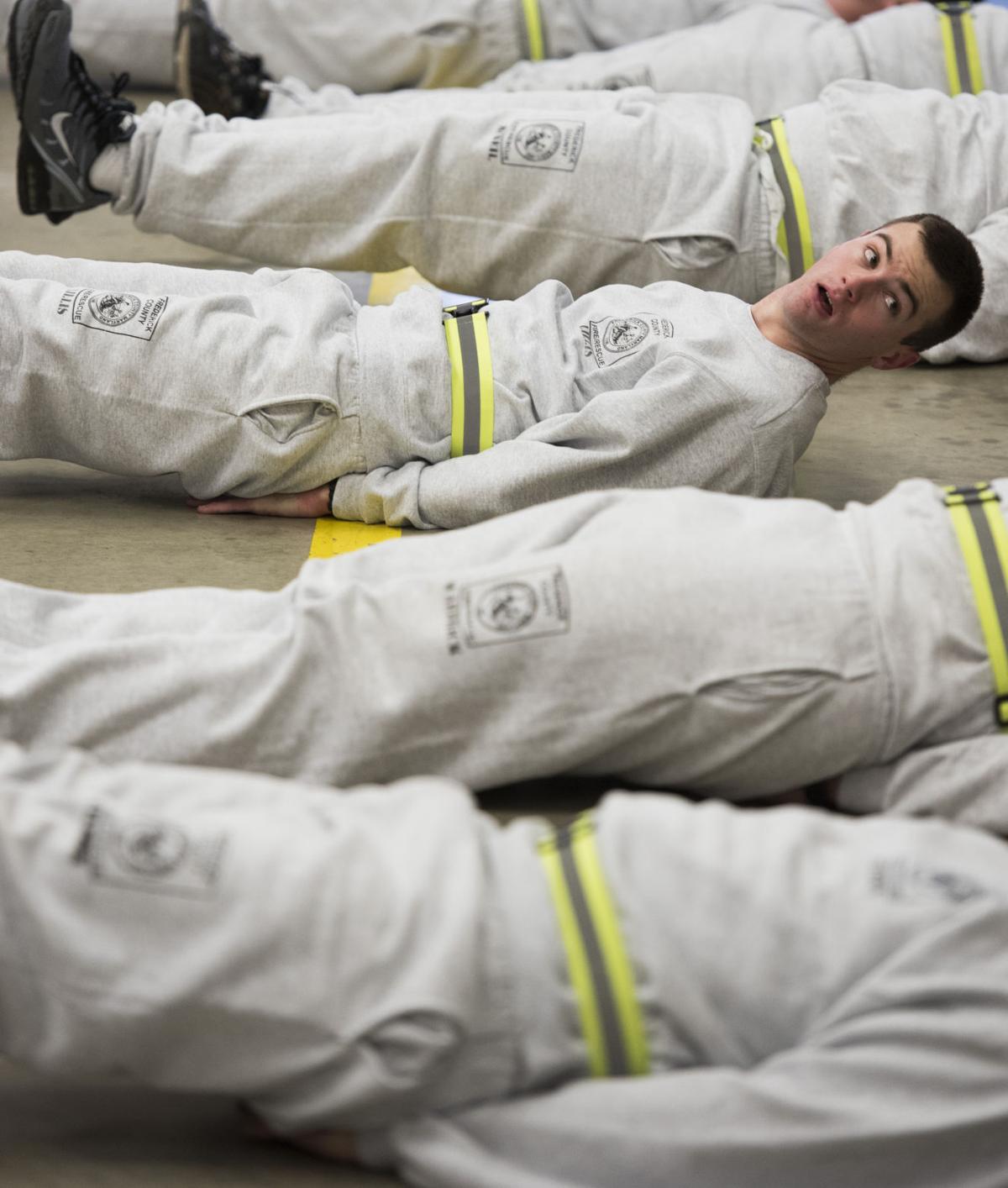 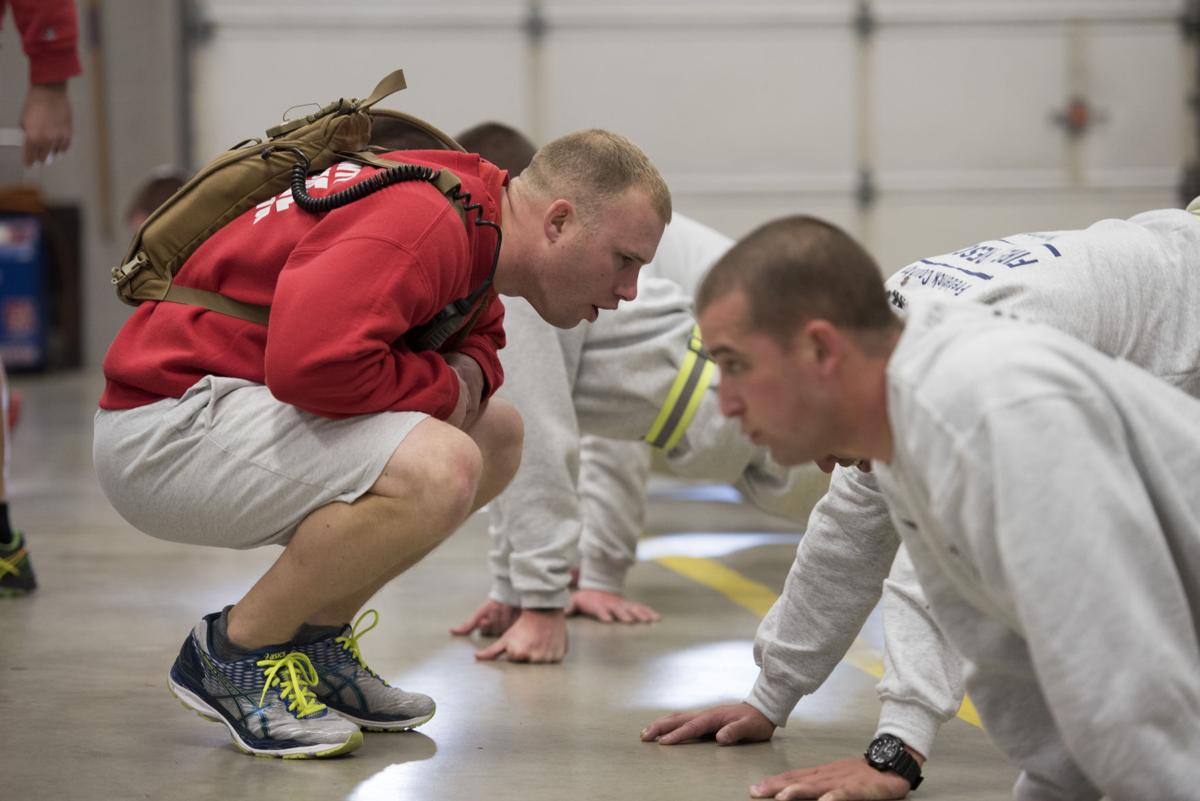 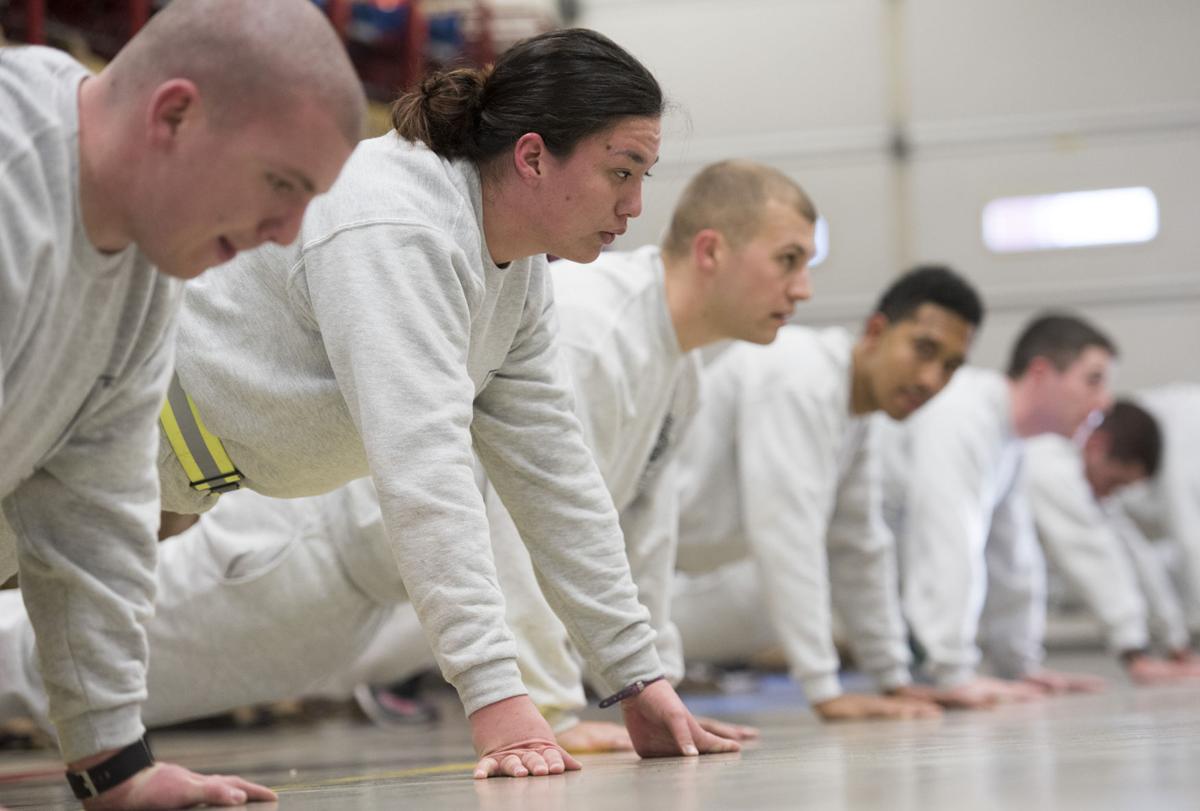 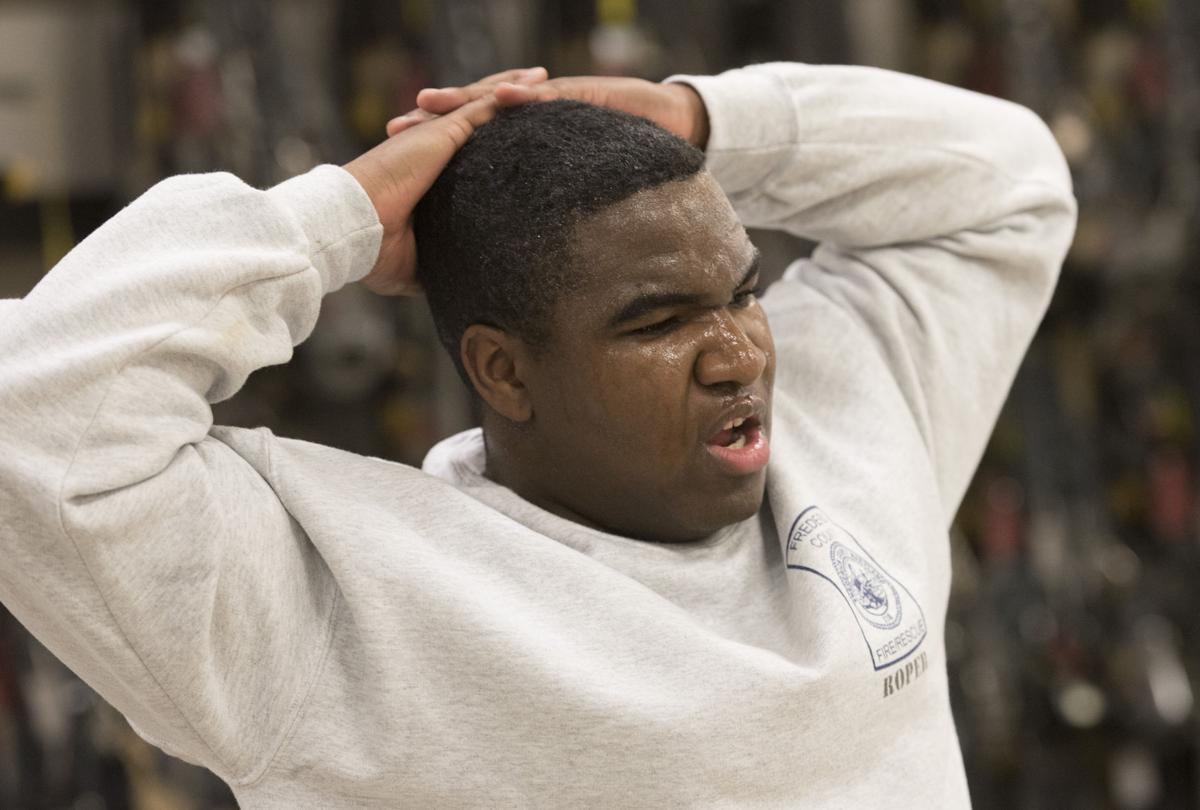 Recruits of Class 21 are led on a morning run by class instructor Lt. Mike Webb, a run which includes stops along the way for various physical training exercises.

The Frederick News-Post will follow the men and women of the Frederick County Division of Fire and Rescue Services’ Recruit Class 21 as they progress through the six-month academy. Each entry in the ongoing series will focus on a different lesson, skill, recruit or subject related to the county’s upcoming class of firefighters as they strive to answer the call to public service.

“What’s the bet?” Lt. Mike Webb shouted to the line of firefighter recruits jogging in formation behind him Monday morning at the Frederick County Public Safety Training Facility.

“All in!” came the shouted reply as Recruit Class 21 wrapped up a 2-mile run around the facility grounds off Reichs Ford Road.

If any of the 24 recruits in Class 21 had any illusions about the amount of effort the academy would require, Webb and his fellow instructors were quick to set them straight with daily physical training drills that open up each day’s lesson. On the heels of the run, which included several stops for pushups and other core exercises, the class filed into an annex building for a round of jumping jacks, leg lifts and more pushups.

As signs of fatigue began to show on several of the recruits’ faces, Capt. Lenne Stolberg joined the instructors to encourage the aspiring firefighters.

“It’s way easier to get them tight from the very beginning then to try and instill that discipline in them later on,” Stolberg said of the tough love shown toward the recruits after the class ended PT at 9 a.m. sharp.

A Marine Corps veteran, Stolberg pointed out somewhat incredulously that not a single recruit in Class 21 has any military experience to draw upon.

“So these guys might not understand that, just because they’re experiencing a little pain, that doesn’t mean they can’t push their bodies just a little bit more,” the captain said, a mildly sadistic grin playing at the corners of his mouth. “That’s probably one of the hardest things to teach.”

Having just started its third week, Class 21 was entering its second week of Firefighter I training, one of the longest courses in the six-month academy, Stolberg said.

Unusually for the academy, Class 21 will at one point have to share the grounds of the training center with two other classes. Class 20 began in September and is expected to graduate in early April, while Class 22 is set to begin March 6 and is slated to continue through Class 21’s graduation June 9, Stolberg said.

“This is only the second time that we’ve ever done overlapping recruit classes, with the last time I believe being in 2007 with recruit classes 7 and 8,” the captain said. “And this is the first time that, within a 12-month period, we’ve put three recruit classes through, and had back-to-back overlaps.”

Of the total 61 firefighter positions in those three classes, about 41 were being funded entirely by a $6,339,748 Staffing for Adequate Fire and Emergency Response grant from the Federal Emergency Management Agency awarded to the county fire service in August, Stolberg said.

“That grant was huge for us because, with us competing for funding with so many other agencies, it probably would not have been possible to fund so many positions,” the captain said.

As it stands, the grant will pay the salaries and benefits of 41 firefighters for two years, after which the county will take over funding, Stolberg said.

Regardless of where the funding comes from, the academy’s instructors did not plan to spare any expenses with Class 21’s strict training regimen, least of all when it comes to physical fitness.

“We need to get better,” Lt. Andre Bailey, the academy’s lead physical fitness instructor, told Class 21 after their workout Monday. “We are rescuers. We may need to rescue someone; you may need to rescue me someday. That’s why this is so important. You have to be ready.”