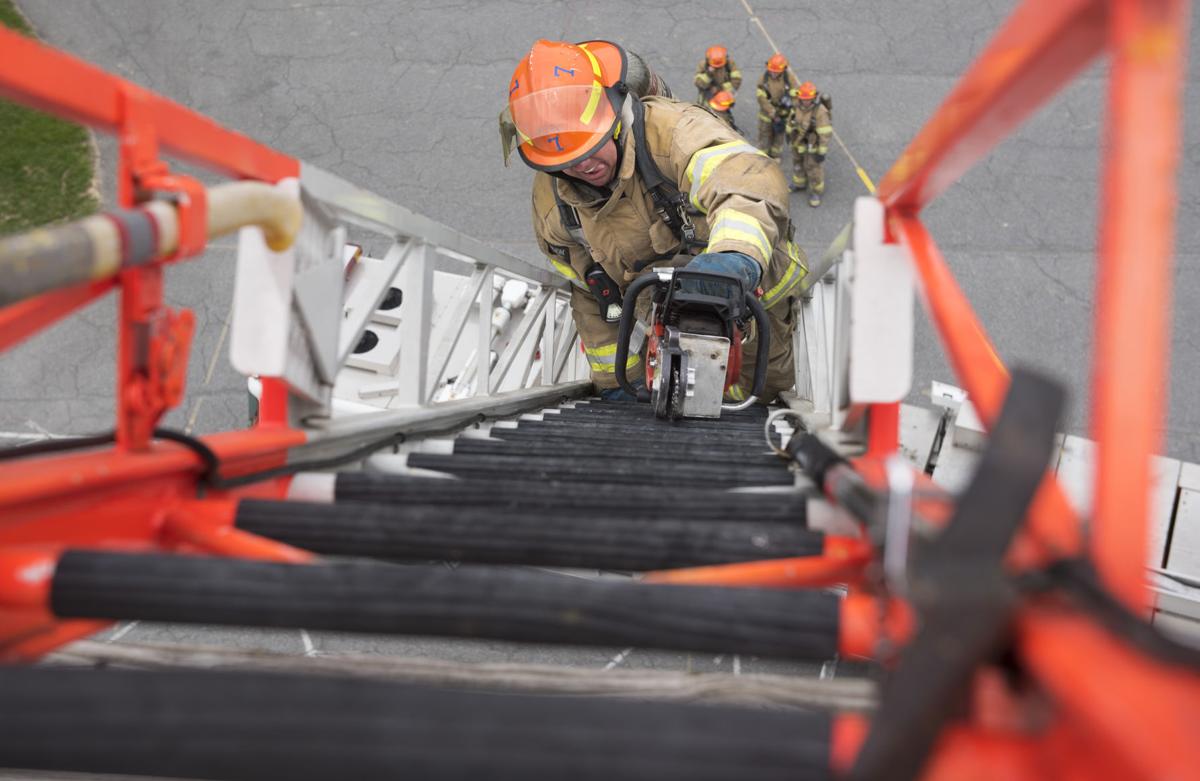 Recruit Edward Hall carries a chain saw up a ladder truck to the roof of a five-story training building Thursday morning. 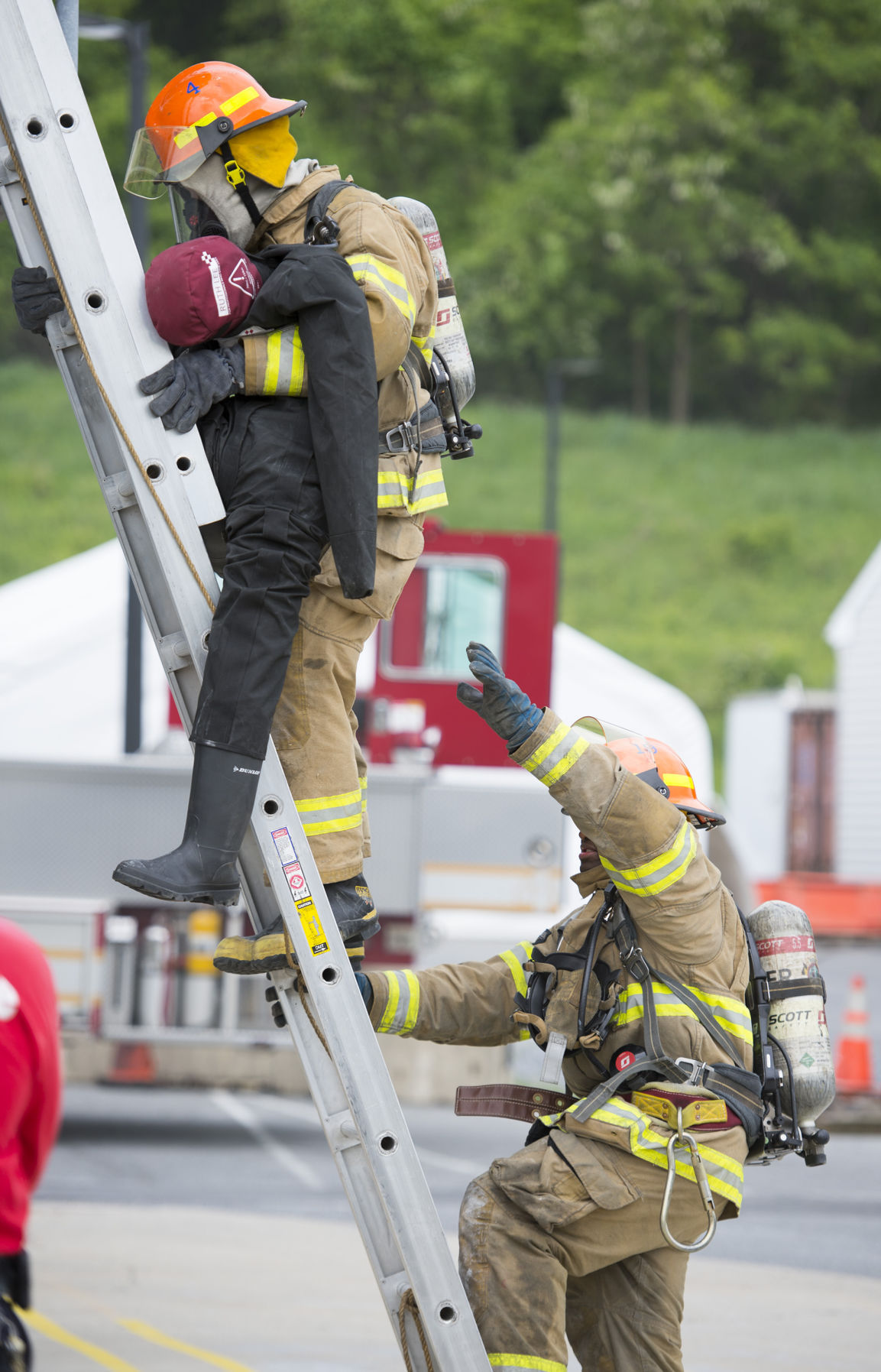 Recruit Edward Hall carries a chain saw up a ladder truck to the roof of a five-story training building Thursday morning.

Firefighter recruit James Wardrick breathed a sigh of relief as he reached the top of a ladder extended from Citizens Truck Company truck 4-2 to the roof of the Frederick County fire training facility’s five-story training tower Thursday.

“How you doing, Wardrick?” asked Lt. Mike Webb, the lead instructor for Recruit Class 21, as Wardrick, 26, dismounted the ladder with a little help from Capt. Steve Schultz. “Overcoming some ... discomforts?”

“If you can call them that, sir,” Wardrick replied, laughing as he pulled his eyes away from the edge.

“Well, if you don’t like heights, now’s the time to make them your favorite,” the lieutenant concluded, slapping the recruit amiably on the shoulder as the next recruit climbed in to view the ladder.

Along with truck 4-2, a mid-mount tractor-drawn aerial truck, the recruits of Class 21 also took turns getting acquainted with Urbana Fire Company’s tower 23, a rear-mounted basket tower truck, during Thursday’s lesson.

Most of Thursday’s training stations took place far above the ground. After carrying axes and chain saws up truck 4-2’s ladder to the roof of the training facility’s tower, each group of recruits took turns being lifted up in tower 23’s basket on the other side of the training platform.

“It’s been the first time for some of these people to really get accustomed to these kinds of heights,” Webb said. “Some of them have had to tame some fears, but they’re getting used to it.”

During a brief pause, Schultz pulled one recruit aside to show him how to properly secure an ax on the ladder’s side rail in order to free up both his hands to grip the rungs.

“It’s useful to know if maybe it’s raining and the ladder is slippery, maybe it’s freezing and you’re already a little afraid of heights, to free up that hand,” Schultz explained as the recruit tried out the new method. “Ideally we want them to maintain three points of contact with the ladder at all times. This can help them do that.”

Later that afternoon, the instructors increased the angle on the ladder from 45 degrees to a far steeper 75 degrees, moving the truck a bit closer to the building to simulate a different type of ascent.

Even the stations set up on the ground were geared toward getting the recruits accustomed to working off the ground. Webb was particularly proud of a wooden structure built with two simulated rooftops of different grades that allowed the recruits to practice cutting holes to ventilate smoke on a difficult angle.

“This prop is awesome because it keeps them maybe 3 feet off the ground but still gives them the full effect of maneuvering around on a rooftop,” Webb said.

Constructed by Lew Raeder, a retired Prince George’s County battalion chief, and firefighter Wesley Hogg, the prop included cues to help the recruits place their ladders and an easily replaceable support beam for them to cut through.

Eventually, Webb said he could envision getting shingles to line the prop to make the prop even more realistic.

In addition to getting the recruits used to heights, the “Truck Ops” class was designed to familiarize the up-and-coming firefighters with the wide variety of unique and specialty trucks stationed around the county.

“It’s valuable for them to get used to what they will be assigned to out in the field,” Webb said, gesturing toward Urbana’s tower truck. “For example, three of these recruits are supposed to go to Station 23 when they graduate, so they’ll be working with this tower, where this very vehicle is stationed.”

Still, for most recruits, the long climb up the ladder to the roof was the most memorable part of the day’s exercises.

“From day one, this was the day I was most nervous about,” Wardrick admitted during a lunch break. “I’ve never been really comfortable with heights. There’s nothing specifically I can point to, I guess it’s always been a confidence thing.”

To prepare himself, Wardrick concentrated on everything he had accomplished up to that point in the academy, noting that Class 21 entered its 22nd week last week when Truck Ops began.

The strategy paid off, but Wardrick said he was going to save his relief for after he and his fellow recruits had successfully scaled the ladder at an angle of 75 degrees.

“When you get down to the ground, you’re like, ‘Yeah, man! I just did that! I can’t believe I just accomplished that!’” he said. “But it’s hard to think like that when you’re up there.”