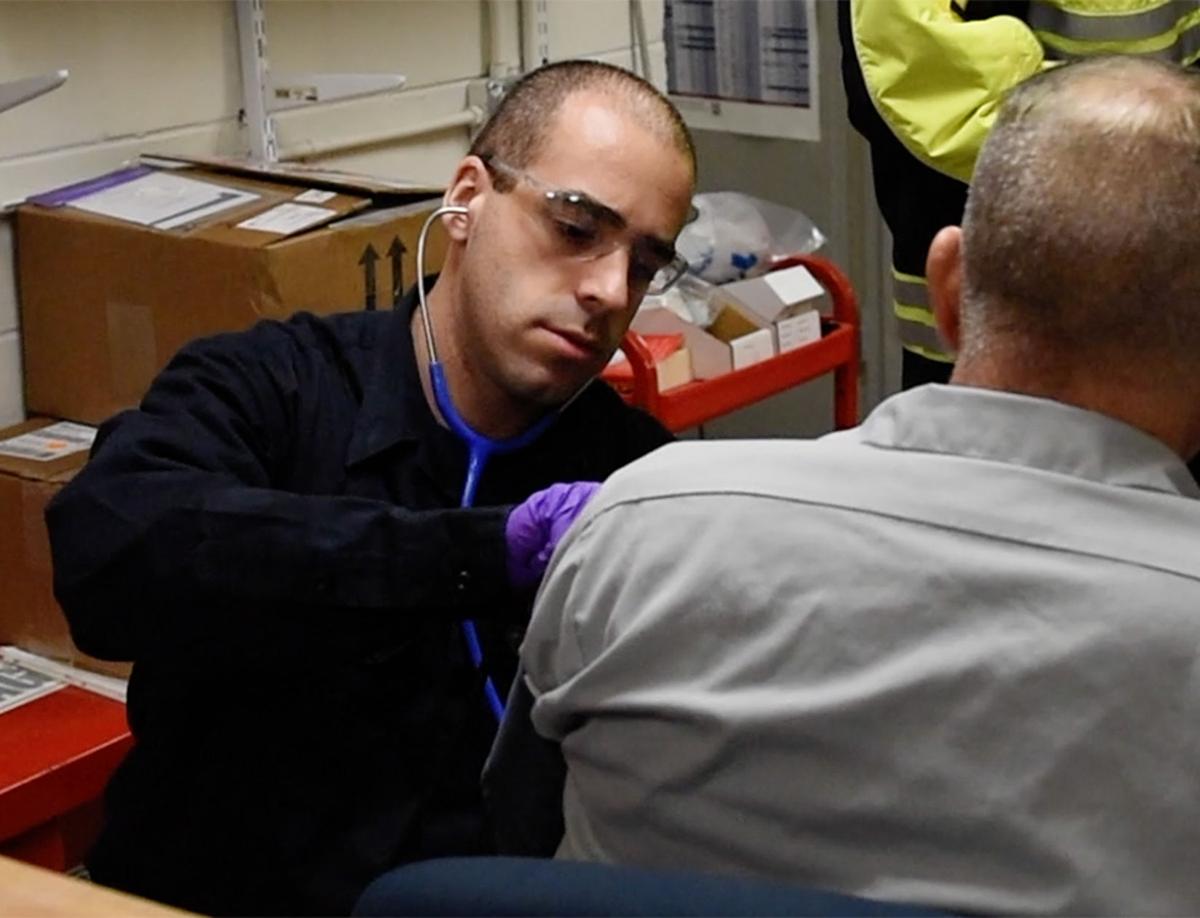 Recruit Patrick Morin takes vital signs and speaks with a patient who experienced chest pains while at work near the Frederick Municipal Airport. The patient was taken to Frederick Memorial Hospital. 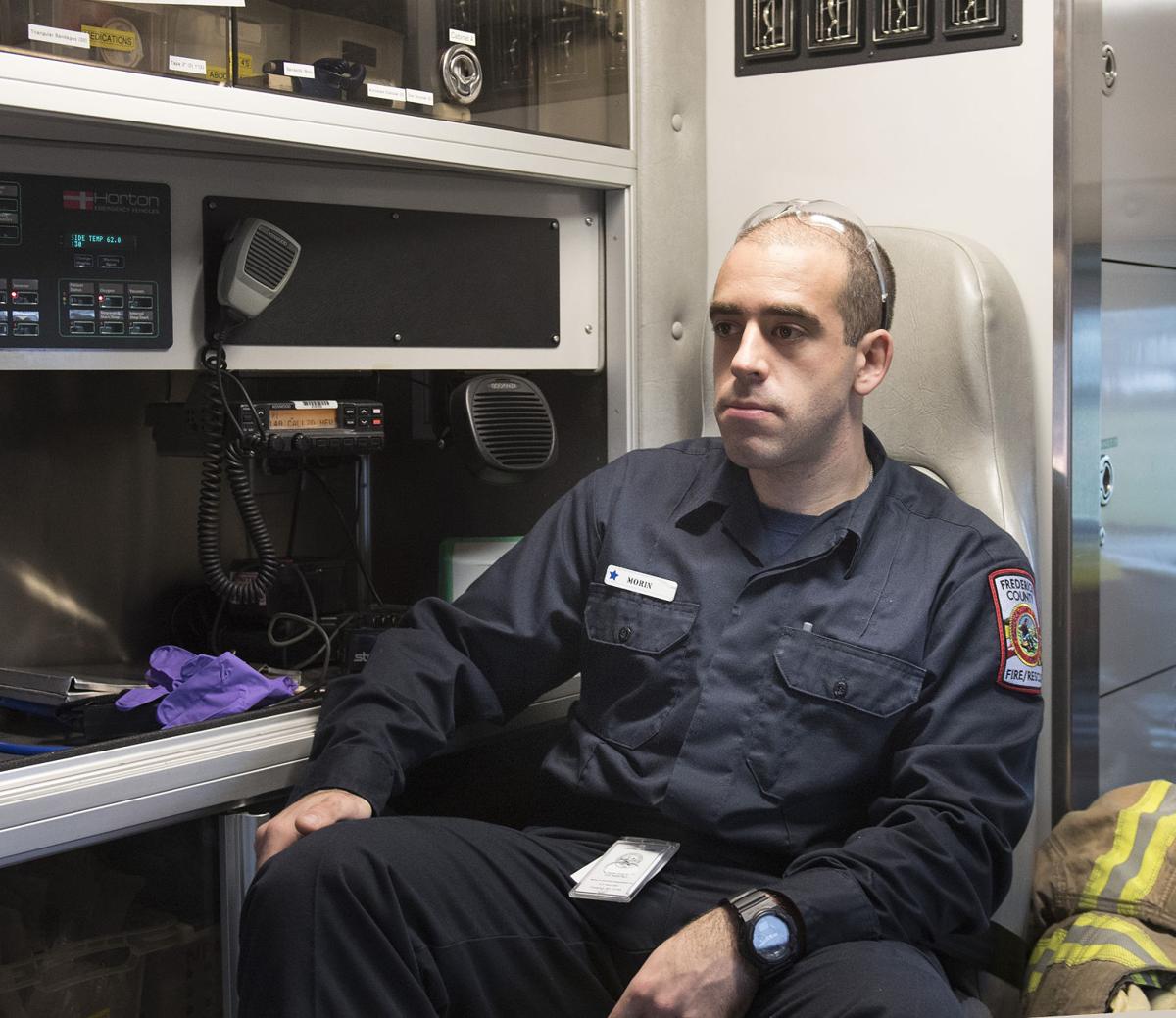 Recruit Patrick Morin sits in the medic’s seat in the back of an ambulance while responding to a call for a patient experiencing chest pains. 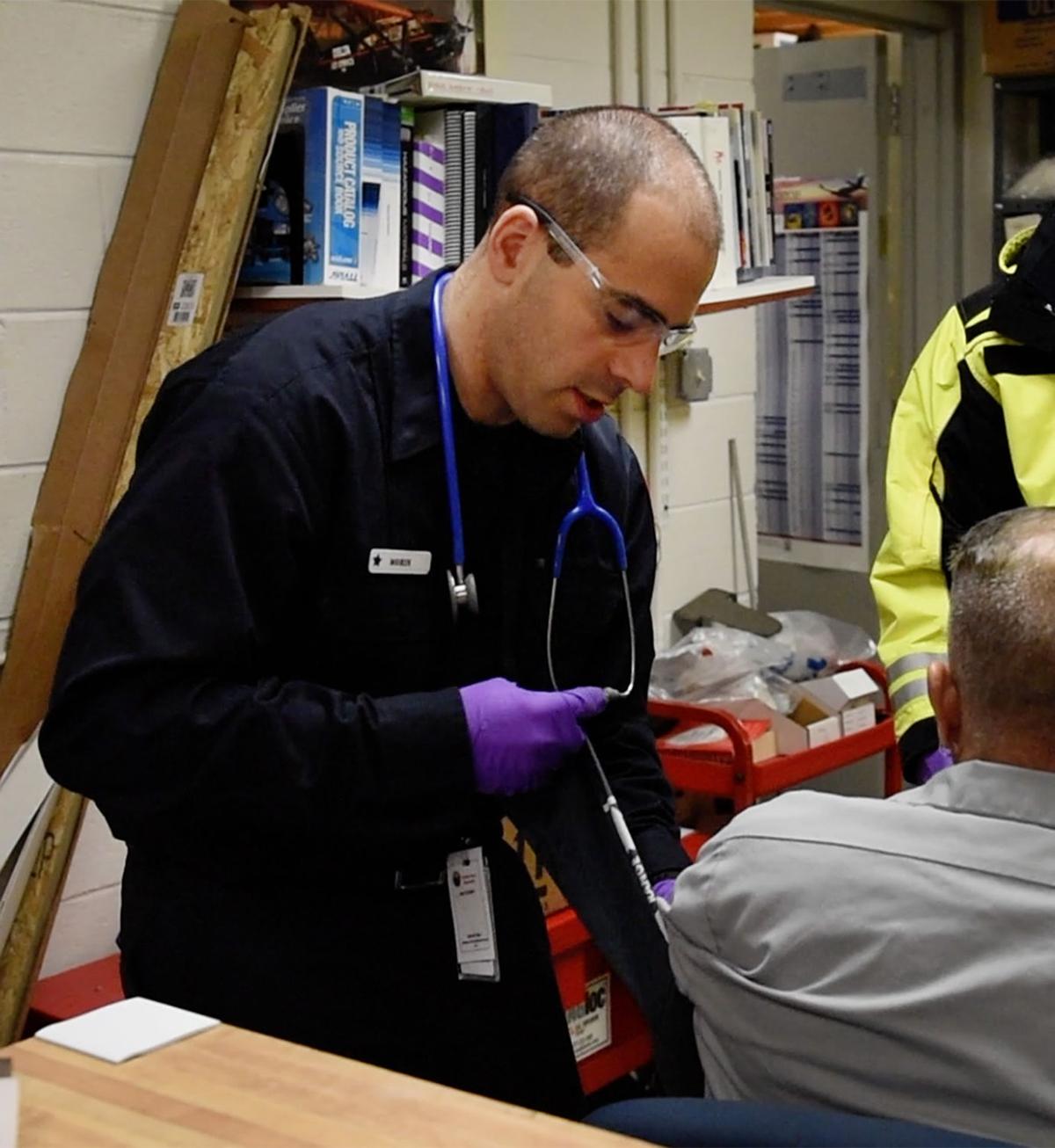 Recruit Patrick Morin takes vital signs and speaks with a patient who experienced chest pains while at work at a business at Frederick Municipal Airport. The patient was taken to Frederick Memorial Hospital.

Recruit Patrick Morin takes vital signs and speaks with a patient who experienced chest pains while at work near the Frederick Municipal Airport. The patient was taken to Frederick Memorial Hospital.

Recruit Patrick Morin sits in the medic’s seat in the back of an ambulance while responding to a call for a patient experiencing chest pains.

Recruit Patrick Morin takes vital signs and speaks with a patient who experienced chest pains while at work at a business at Frederick Municipal Airport. The patient was taken to Frederick Memorial Hospital.

A whirlwind of emergency lights sent firefighters scrambling for the ambulance at the United Steam Fire Engine Company in downtown Frederick at 9:08 a.m. Friday.

“Looks like a medical call out by the airfield,” said Capt. Rick Stitely, shouting to be heard over the bells and alarms echoing throughout the crowded engine bay.

The captain nodded to one of the rushing figures, 29-year-old recruit Patrick Morin, as Morin leapt into the bucket seat behind the driver’s seat of the ambulance to strap in.

“This should be a good one for him,” Stitely said as he buckled his own seat belt. The call was for an adult man suffering intense chest pains at Signature Flight Support at Frederick Municipal Airport.

Minutes later, Morin was jumping out of the ambulance into the steady rain falling over the airport to help carry in equipment. The patient sat surrounded by a group of anxious-looking co-workers and relatives.

“Just relax your arm for me,” Morin told the man, reaching out to gently but firmly place the diaphragm of his stethoscope on the inside of the man’s elbow after inflating a blood pressure cuff around his upper arm. “Just like that. Thanks.”

Since March 27, the roughly two dozen recruits in the Frederick County Division of Fire and Rescue Service’s 21st firefighter academy class have split into two groups, according to Capt. Lenne Stolberg, the director of the academy.

One group focuses on emergency driving lessons back at the academy grounds on Public Safety Place. The other half of the class was assigned to complete a series of ride-alongs with several fire stations to gather real-world experience out in the field.

For the recruits, the opportunity to put their lessons to practical use during their station ride-alongs was a welcome break from the mostly classroom-based emergency medical portion of the academy that began more than a month ago.

“EMT is definitely the most academically intense and challenging class, so it’s nice to get a little bit of a break from that, but also, on the other side, you get to take those skills and everything we’ve learned and put it into practice and see how things go out in the field,” Morin said as he and a fellow recruit, 22-year-old Tanner Sholley, prepared for their ride at the fire station earlier that morning.

Arriving before sunrise to join the rest of the crew for breakfast, the recruits were treated like any other rookies by the career and volunteer firefighters assigned to the company’s daily roster.

“You said you’re from Philly?” one crew member asked Sholley as the group sat in the station’s upstairs kitchen area waiting for the first call of the shift.

Nodding, Sholley briefly outlined how he had spent a few years with a volunteer company in a suburb just north of Philadelphia before applying for Frederick County’s academy.

“Pat’s or Geno’s?” the crew member shot back, referring to two rival Philadelphia-based restaurants that both claim to serve the city’s best cheesesteak sandwiches.

“Uh, what?” Sholley stammered with a nervous smile, caught off-guard.

The recruits were not yet familiar with the other men to immediately pick up on the banter and light-hearted ribbing expected of regular personnel, but Morin and Sholley fit right in when more practical parts of station life came into play.

Setting up in the back of the “front” ambulance — the vehicle designated as the primary response vehicle for medical calls during the shift — Sholley and Morin were right at home checking equipment bags and talking shop with their teammates for the day.

“I’m just hoping to get a little more experience under my belt and see how Frederick County does things,” Morin said. He volunteered with a fire station in nearby Rockville for about a year prior to applying for Frederick County’s academy.

“The environment here is very similar to my old station,” Sholley added with a smile.

Under the watchful eyes of EMT supervisors, each recruit ideally will complete a certain number of patient interactions by the time they finish their ride-alongs and rejoin their classmates back at the academy.

Morin and Sholley also spent some time assigned to shadow nurses and other employees at Frederick Memorial Hospital — anything that will give them experience with actual patients.

After the patient was rolled from the building at the airport out to the ambulance, one of Morin’s supervisors for the shift took a look at the vital signs the recruit had recorded and decided to look closer at the man’s vitals and heart activity using an electrocardiogram.

On closer inspection, the experienced medics onboard considered the patient “priority one,” meaning the ambulance’s lights and sirens were used to get the man to the hospital as quickly as possible.

“She thought [the patient] could possibly have a heart attack,” Morin said. “... So the medic called ahead on the radio, gave her report and said we were inbound with a priority one, chest pain patient, and they told us right away on the radio, ‘OK, room 15 when you get here,’ and they were all waiting for us when we got there.”

As commander of the Frederick County Division of Fire & Rescue Service's Firefighter Academy, Lenne Stolberg is charged with helping prepa…

Capt. Steve Schultz cringed Thursday as he watched a recruit drive an ambulance over a simulated pedestrian. It was the final leg of the Frede…