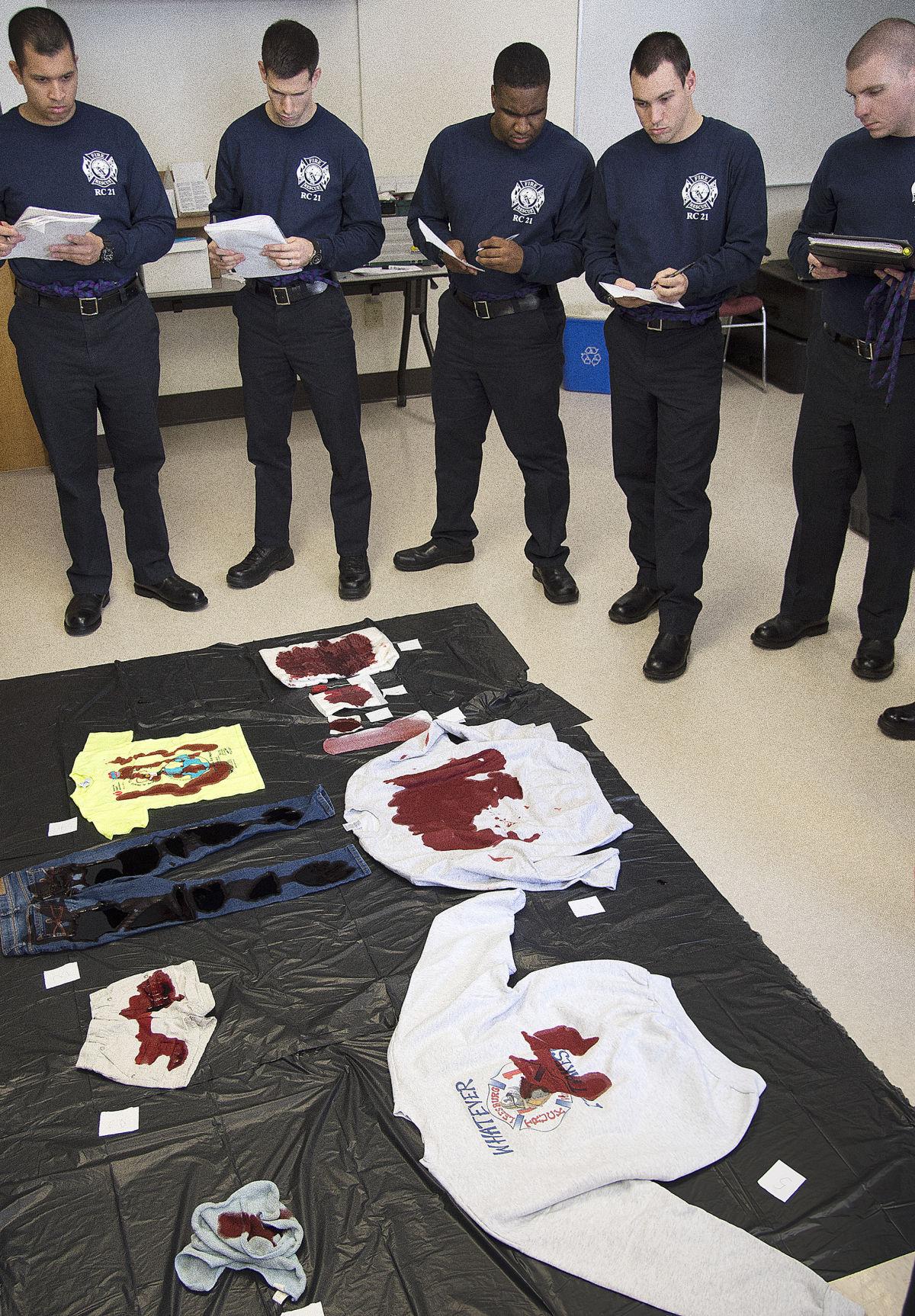 As part of their training, fire academy recruits on Friday estimate the amount of fake blood, in milliliters, that soaked into each garment. 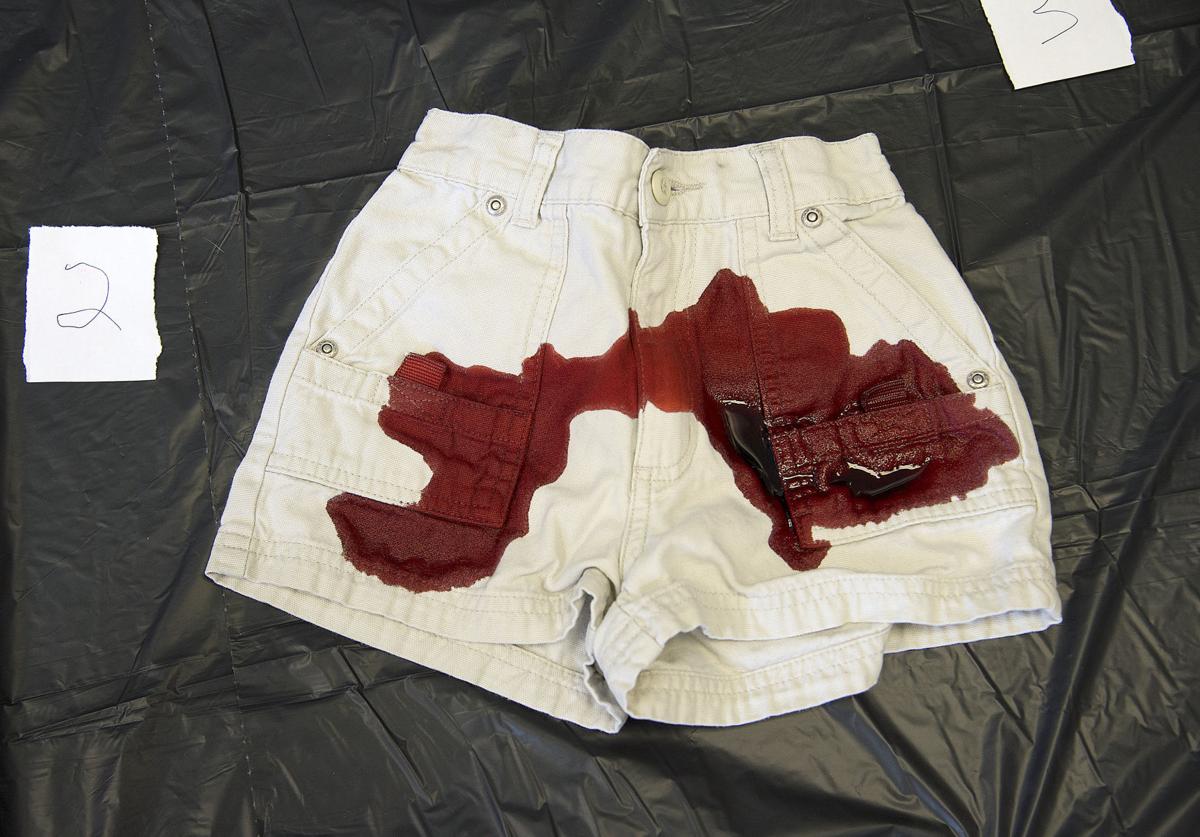 A pair of shorts with fake blood is part of an exercise Friday for fire academy recruits to learn how to estimate the amount of blood that soaked into a garment. 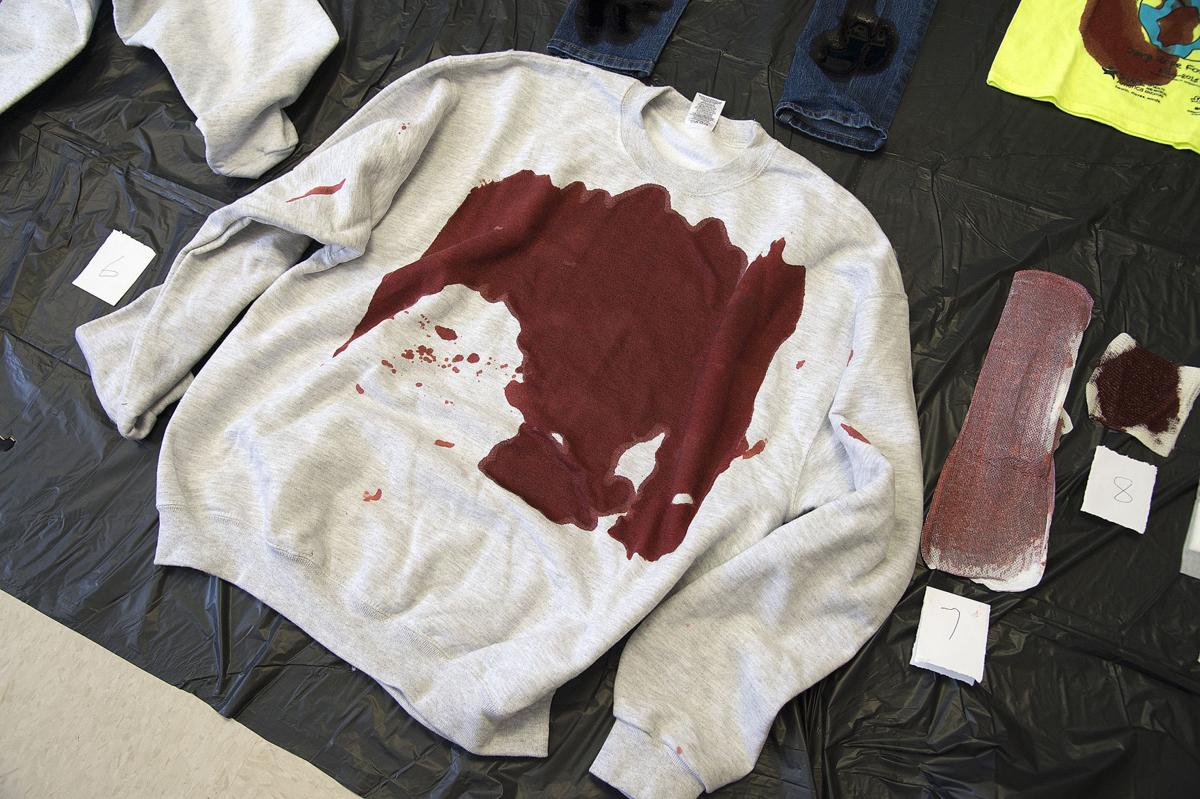 Sweatshirts, pants and other items soaked with fake blood are used Friday to help fire academy recruits learn to estimate the amount of blood that soaked into each item.

As part of their training, fire academy recruits on Friday estimate the amount of fake blood, in milliliters, that soaked into each garment.

A pair of shorts with fake blood is part of an exercise Friday for fire academy recruits to learn how to estimate the amount of blood that soaked into a garment.

Sweatshirts, pants and other items soaked with fake blood are used Friday to help fire academy recruits learn to estimate the amount of blood that soaked into each item.

As with most lessons, the recruits adopted a competitive attitude as Miller announced how much fake blood was used to decorate several items of clothing in a display set up across the academy. With the goal of teaching the recruits about blood loss, Miller let each group of students examine the displays briefly to jot down their best guesses in their notepads.

“This is something that not many EMS providers are very good at, because it’s tough, but we need to be able to give the hospitals an estimate of how much blood someone has lost,” Miller said.

To prove a point about how tricky blood estimates could be, Miller poured equal amounts of simulated blood into a small rag and on a pair of children’s denim shorts. He then bundled up the rag to conceal the fluid.

When it came time for recruits to share their estimates, most correctly guessed the amount of fluid used in the rag, but overestimated the amount used on the shorts. Several recruits groaned out loud as Miller read the actual measurements a moment later.

“The shorts were also 50 milliliters,” Miller said, laughing. “I put those two together to compare the rag to the shorts. The shorts were spread out. The rag was in a ball. That can make a difference in how you perceive it.”

While Friday’s experiment took on the semblance of a game for many of the competitive recruits, Miller and his fellow instructors always circled back to reinforce the real-world applications of the lesson.

In less than a week’s time, the first group of recruits will be sent out on ride-alongs with fire stations around the county. They will observe how the lessons learned in class are applied in real emergencies.

“We’re actually in the field next week. ... So it’s kind of a break from EMT classes,” said recruit Edward Hall, who goes by Brad. “But on the other hand, not really, because we’ll be expected to know all of this out in the field.”

If not all of the lessons have sunk in by the time recruits begin their ride-alongs, the fire and rescue personnel they meet in the field will have plenty of real-life experiences and wisdom to impart.

Lt. David Coe said he was glad for all of the training he’d received in traumatic care when his crew arrived at the scene of a double stabbing at the Rockledge Plaza shopping center on West Patrick Street at about 5 p.m. on Dec. 2, 2015.

With one of the patients rapidly bleeding out with a deep stab wound on his neck, Coe and his colleagues stabilized the bleeding by reaching their own hands inside the gaping wound. They took turns applying pressure until the young man was on his way to an operating table at a hospital.

“Bleeding control and blood management is one of the most basic levels of skills that we do, and having the basics of that is what everything else is really built around in terms of keeping people alive and doing our jobs,” Coe said, looking back on his training. “... One thing that we don’t carry is blood, and the human body needs blood to stay alive.”

Station 1, the crew that Coe was working with on the night of the stabbing, is one of several fire stations that will accept recruits from class 21 for ride-alongs in the next two weeks, said Lt. Mike Webb, the lead instructor for the class.

The usefulness of the lessons wasn’t lost on recruit Russell Martin, who spent three years as a paramedic in New Jersey before applying to the Frederick County academy. Because of his experience, Martin is considered something of an expert by the other recruits, who refer to him affectionately as “the medic.”

“The more blood you lose, there’s different defense mechanisms that your body starts to kick in, and as those mechanisms start kicking in, a lot of things change in the body,” Martin said. “The heart initially speeds up, but eventually slows down and your breathing slows down, as well, for example.”

Another important lesson the instructors tried to impart in the classes leading up to the first ride-alongs was the importance of keeping a level head when confronted with emergencies.

“Were any of these people’s lives threatened based on blood loss?” Miller asked the class after reading the last measurements Friday.

Glancing over their numbers, the recruits slowly shook their heads, remembering their classroom lessons on dangerous levels of blood loss for different weights and patient age ranges.

“Not for an adult, no, but to that patient, would that seem life-threatening to them? ... It sure looked like a lot of blood in there, but it’s focused to a small area,” Miller said.

Hello. I discovered your site utilizing msn. This is an exceptionally elegantly composed article. I'll make certain to bookmark it and return to peruse a greater amount of your helpful data. A debt of gratitude is in order for the post. I'll unquestionably return. minecraft free play netflix password

Great site, Distinguished criticism that I can handle. Im pushing ahead and may apply to my present place of employment as a pet sitter, which is exceptionally charming, yet I have to extra grow. Respects. jackpotconnection

I truly awed after read this on account of some quality work and useful contemplations . I just wanna express profound gratitude for the author and want you to enjoy all that life has to offer for coming!. Make Women Want You

This is such an awesome asset, to the point that you are giving and you give it away for nothing. I adore seeing blog that comprehend the benefit of giving a quality asset to free. internet marketing consultant