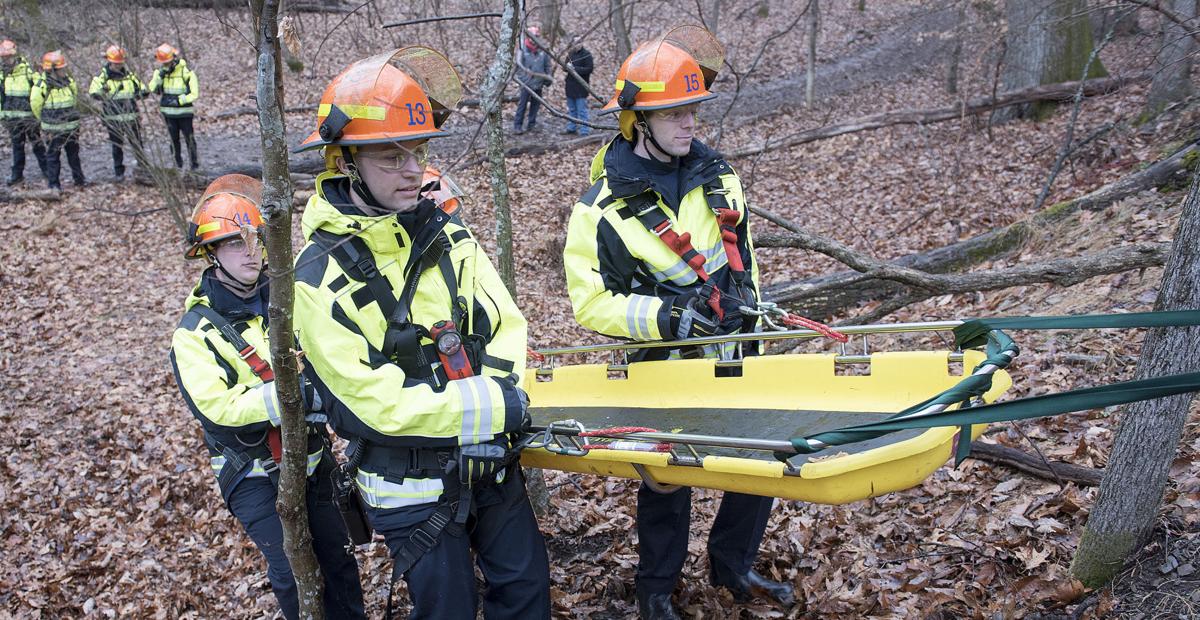 Fire academy recruits, from left, Zack McNeil, Russell Mangus and John McNemar hold onto a rescue Stokes basket as they are assisted up a slippery hillside. A rope system helps them reach a simulated injured person at the top. The class learned ropes, knots and elevated rescue techniques last week. 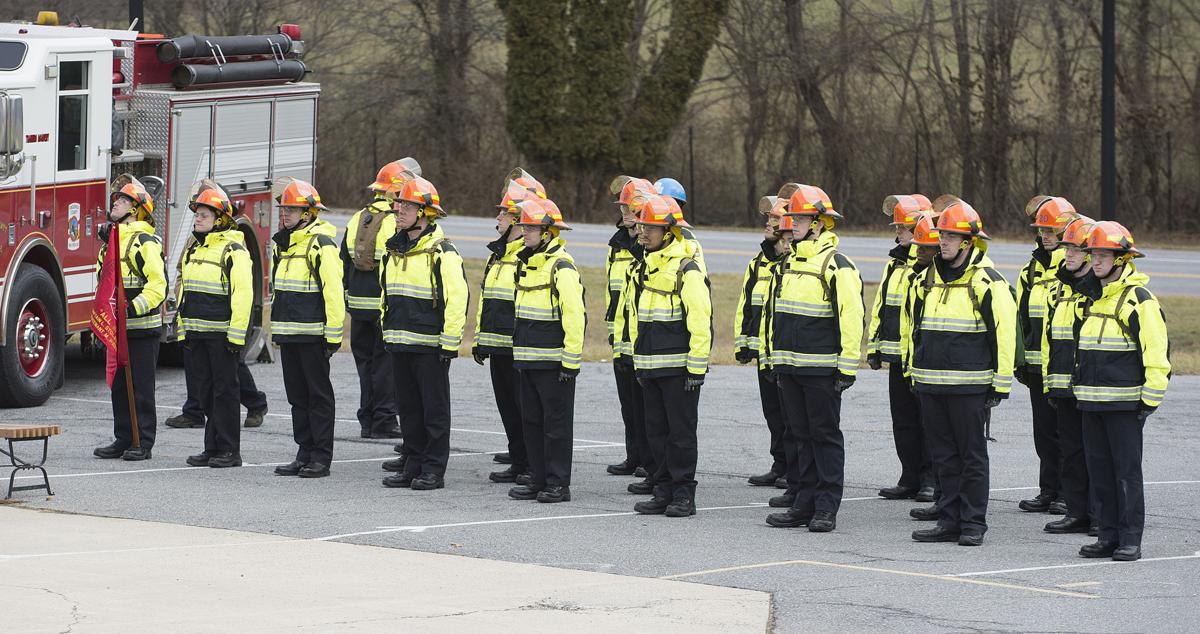 Frederick County Division of Fire and Rescue Service's Recruit Class 21 stands at attention at the end of a exercise in using ropes in elevated rescue training.

Fire academy recruits, from left, Zack McNeil, Russell Mangus and John McNemar hold onto a rescue Stokes basket as they are assisted up a slippery hillside. A rope system helps them reach a simulated injured person at the top. The class learned ropes, knots and elevated rescue techniques last week.

Frederick County Division of Fire and Rescue Service's Recruit Class 21 stands at attention at the end of a exercise in using ropes in elevated rescue training.

The Frederick News-Post is following the men and women of Recruit Class 21 as they go through the Frederick County Division of Fire and Rescue Services’ six-month firefighting training academy. Stories will focus on lessons, skills and individual recruits as they answer the call to public service.

Drizzle fell over Pinecliff Park early Friday as the recruits of Class 21 made their way down a muddy hill, a stretcher held securely between them.

“Watch the tree behind you, McNemar,” recruit Patrick Mangus shouted down from the top of the steep incline as recruit John McNemar reached a hand behind him to take hold of a sapling from recruit Zack McNeil.

At the top of the hill, Lt. Jared Brown leaned against a tree, watching as recruits Lauren Lum, Timothy Kessler and Damien Delogu gradually fed rope down to the team holding the stretcher.

In Friday’s training scenario, the recruits were split into several groups and told that a 40-year-old hunter had fallen out of a tree stand at the top of a treacherous slope, Brown said.

After the recon team found the patient and guided the rescue team in, the trainees got to work rigging up a complex system of ropes and pulleys. After a quick assessment, the recruits decided that a 3:1 ratio would give the rescue team the best mechanical advantage to bring the patient safely down the slope, said Capt. Lenne Stolberg, who watched the training exercise from the base of the hill.

“That same ratio also affects how much pull you get, so by using a 3:1, I’ve reduced the resistance of the load by a third, but it’s going to take three times the amount of rope to move the patient,” Stolberg explained.

While outsiders don’t typically think of mathematics and physics in the context of fire and rescue operations, last week’s training showcased the recruits’ critical thinking skills more than anything else, Stolberg said.

For example, the terrain might not allow firefighters enough space to set up a more complicated 5:1 weight ratio, even though the higher ratio would potentially help fewer rescuers move more weight, the captain said. The ability to quickly and correctly assess a variety of complex factors is key to a successful rescue, Stolberg said.

“We don’t want to turn out a bunch of recruits who know what to do but not when to do it,” Stolberg said, repeating a phrase that has become a mantra for the class. “Rescue work is a thinking man’s game.”

An extraction team waiting at the base of the hill stood near an ATV used to drive the patient out to the briefing zone under a park pavilion at the conclusion of the scenario.

Ideally, the extraction team was scheduled to load the patient into a Maryland State Police helicopter after setting up a landing zone in the park nearby, but the overcast weather and a wind advisory didn’t allow the helicopter to fly, Stolberg said.

The recruits also put their rope skills to the test last week after spending countless hours of downtime practicing the eight main knots tested in the academy.

During a hands-on lesson in ropes Thursday back at the Frederick County Public Safety Training Facility, Lt. Brown and firefighter David Hubler reviewed the finer points of a rope rescue system with the recruits ahead of the practical tests at Pinecliff Park scheduled for Friday and Monday.

“When it comes to knots, if it’s not tied properly, there is a serious risk of catastrophic failure, and when I’m hanging on that rope or one of my guys is hanging on the other end of that rope? That’s not a chance I’m willing to take,” Brown told the class as he tested the strength of their knots.

Recognizing the import of Brown’s words, the recruits were quick to step in to help one another master the different techniques and work through problems.

“With these fingers right here, I’m releasing the tension, you see?” recruit Edward Hall said to fellow recruit Joseph DiMartino as Hubler and Brown were busy helping another group of recruits with their knots.

“Makes sense,” DiMartino replied, taking the rope back from Hall and getting the thumbs-up from Lum on the other end of the rope.

“This whole business is nothing but a team sport, so if you can help your partner out, help your neighbor out or help your crew, then absolutely do it,” Brown said. “Everybody has strengths and weaknesses, so play to them.”