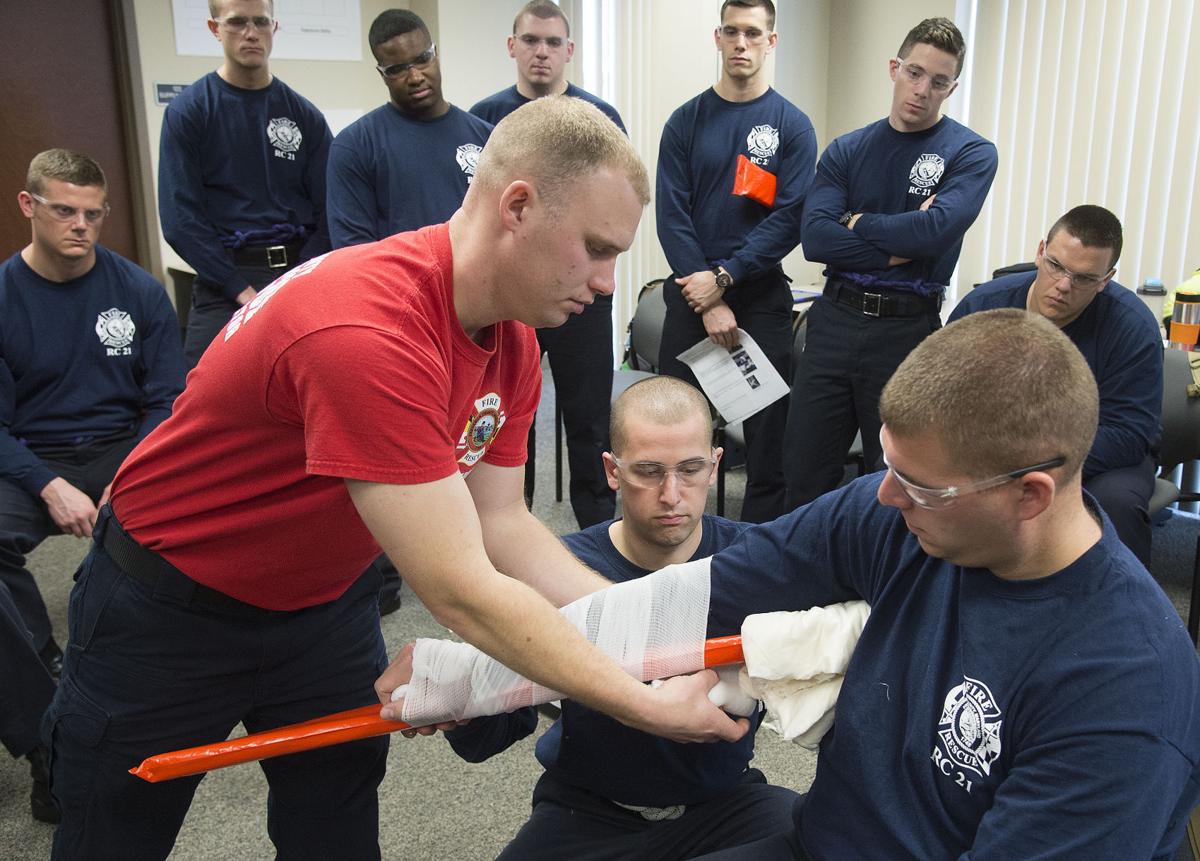 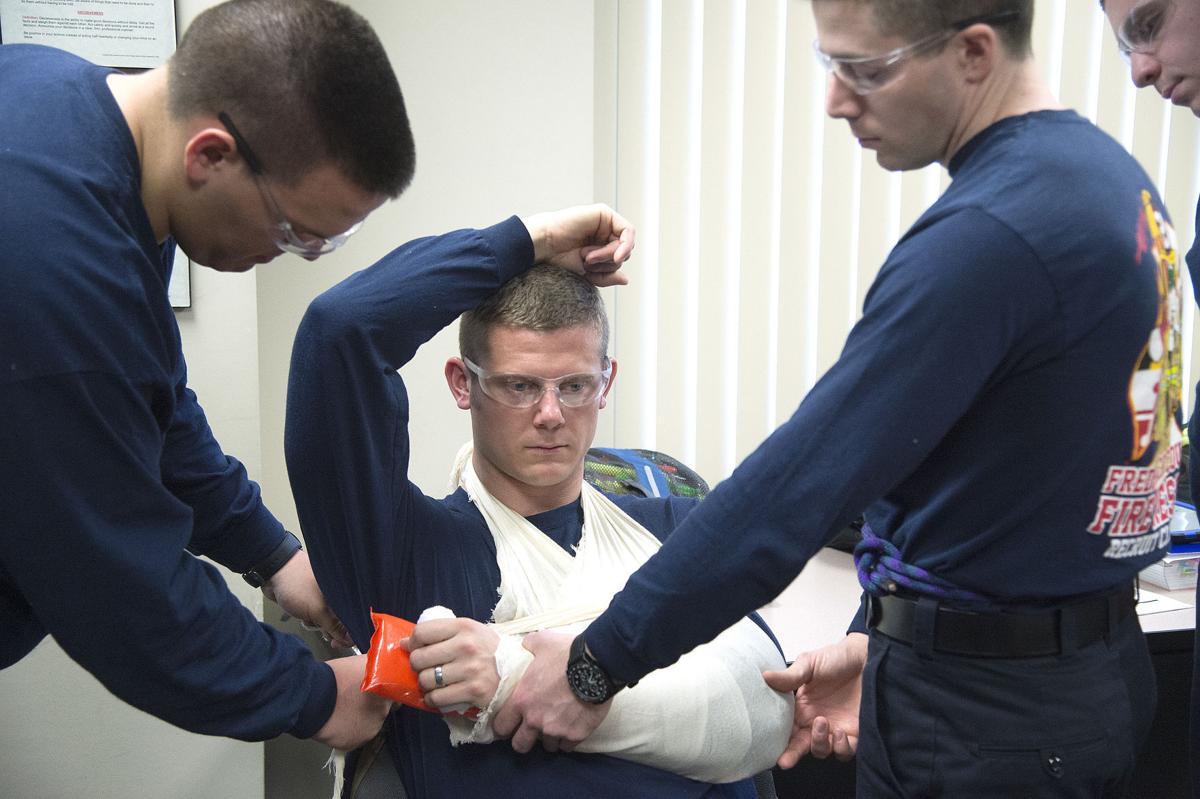 The classroom lectures of Frederick County’s firefighter academy took on a slightly more urgent tone last week for the 11 recruits in Class 21 who still need to take the national registry exam.

“There’s definitely some anxiety, especially for the ones that are going to have to take the national registry test, but there are resources out there that we’re giving them, whether they’re programs online or what we’re reviewing every day,” said Bernie Studds, who has been teaching the emergency medical technician class with fellow fire medic Adam Miller since Feb. 17.

While 12 of the 23 recruits in the class are already certified as emergency medical technicians — one is even a certified paramedic — thanks to prior experience, the other half will need to pass the National Registry EMT exam on Monday to progress, Studds said.

“Hopefully, come that time, they should be ready,” Studds said.

The NREMT, which is administered electronically in multiple-choice format, will be followed by a practical exam administered by Maryland Institute for Emergency Medical Services Systems (MIEMSS) representatives at the academy on April 21.

The practical test will close the academy’s nine-week EMT section.

The exam itself is broken down into five subject categories: airway and ventilation, cardiology and resuscitation, trauma, general medical and OB-GYN, and general EMS operations, said Lt. Kathleen Harne, who oversees NREMT testing in her role in the training division.

But the test also adapts to each individual test-taker, Harne said.

For example, if a recruit answers a cardiology and resuscitation question correctly, the exam will give him or her more difficult questions in that subject.

If the recruit continues to answer the progressively more difficult questions correctly, the test will ask only the minimum number of questions in that subject before moving on to another subject and beginning again in terms of difficulty, Harne said.

“So you take a test that is completely different from what I take because it’s adaptive to us as individuals,” she said. “The subject matter is the same, but it can be catered to the individual test-taker and where they’re struggling in terms of the difficulty of the questions and content.”

The exam automatically ends after a recruit has either passed or failed. Recruits who do well in every subject may get only the minimum 70 questions, Harne said. Others could answer up to 120 questions.

This more rigorous test model, which was common for nurses and others in the medical field for some time, only recently became the standard accepted for EMT hopefuls when MIEMSS adopted it a few years ago, Harne said.

“Before, you would take your standardized test with pencil and a piece of paper and everyone got the same 150 questions. ... It was a struggle, initially. The pass rates were not that great,” she said.

Only one of the nine recruits in Class 20 — the first academy class to take the new exam — failed to pass the exam on the first try, Harne said. The recruit passed on the second attempt and graduated with the class just last week.

The new national registry exam was in place during Recruit Class 19, but all of the recruits in that class were already certified EMTs, Harne said, making classes 20 and 21 the first to undergo the new testing standard.

Like most students preparing for an important exam, the 11 uncertified recruits in Class 21 were nervous ahead of the test date.

“Am I anxious? A little bit, but the instructors gave us a lot of tools to use and our teacher knows how to prepare us effectively, so I think we’ll all be good,” said Phillip Tracey, a 26-year-old recruit who will take the exam April 17.

Certified or not, all 23 recruits in the class spend each day reviewing lessons in EMT skills, Tracey said.

Each day in class ends with a slideshow reviewing the key points from that day’s lesson and assigned reading from the academy’s textbook. Most lessons also include a brief quiz that recruits must complete by midnight that night, Tracey added.

“Then, during the day, we’ll have practicals. Like today, either a half a day or a whole day of practical exercises to get the skills that we’ve learned about to where they need to be,” Tracey said. “The practical stuff comes a little bit easier to me with repetition and all, but just trying to retain all of the information and knowledge, that’s where a lot of my time is spent.”

Many of the recruits who still need to pass the NREMT also invested in supplemental study guides and practice exams, available at extra cost, to help them prepare for the test.

“It helps you study,” said recruit Tre Roper, 23, a former volunteer with the United Steam Fire Engine Co. in downtown Frederick who still needs to pass the exam. “Like, I paid, like, $50 for one that had, like, a thousand questions. A thousand questions from the national registry, so it should help, somewhat.”

Answering the call: The rest of the series