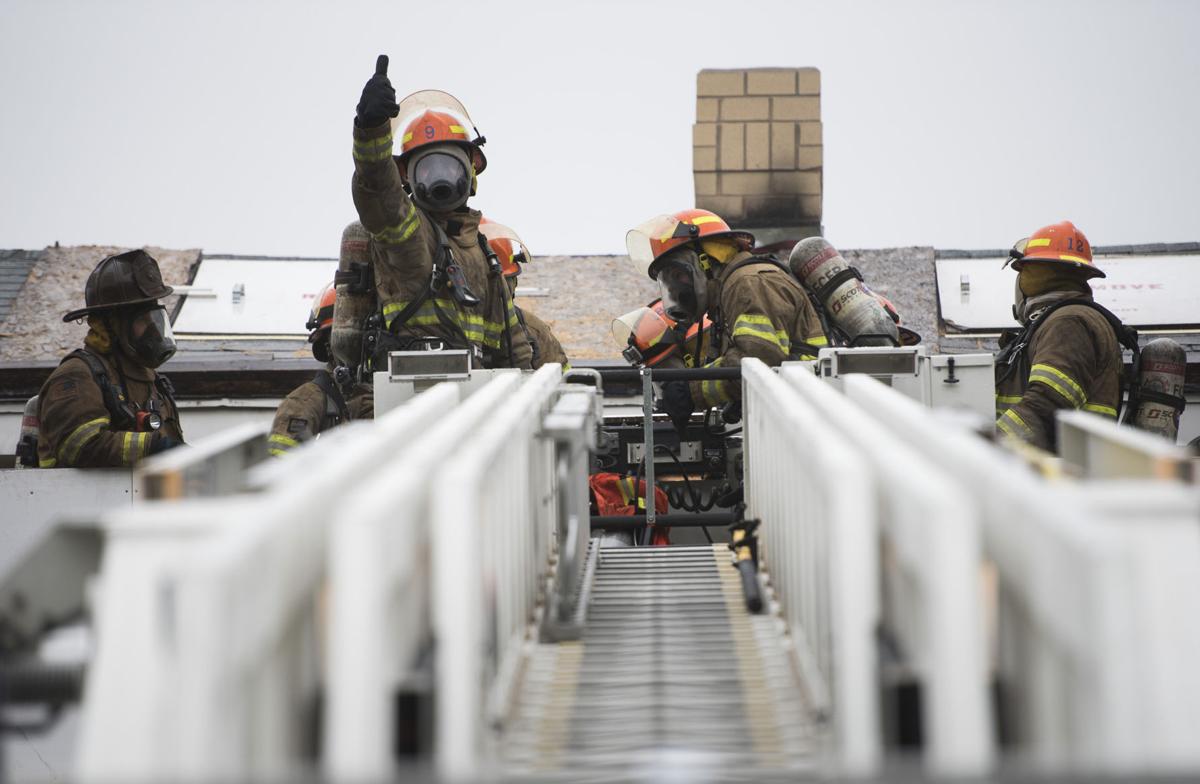 A recruit signals to a ladder truck operator that the bucket can be pulled away from a training building during an exercise simulating an emergency in which a firefighter has fallen through the floor of a building and needs to be rescued. 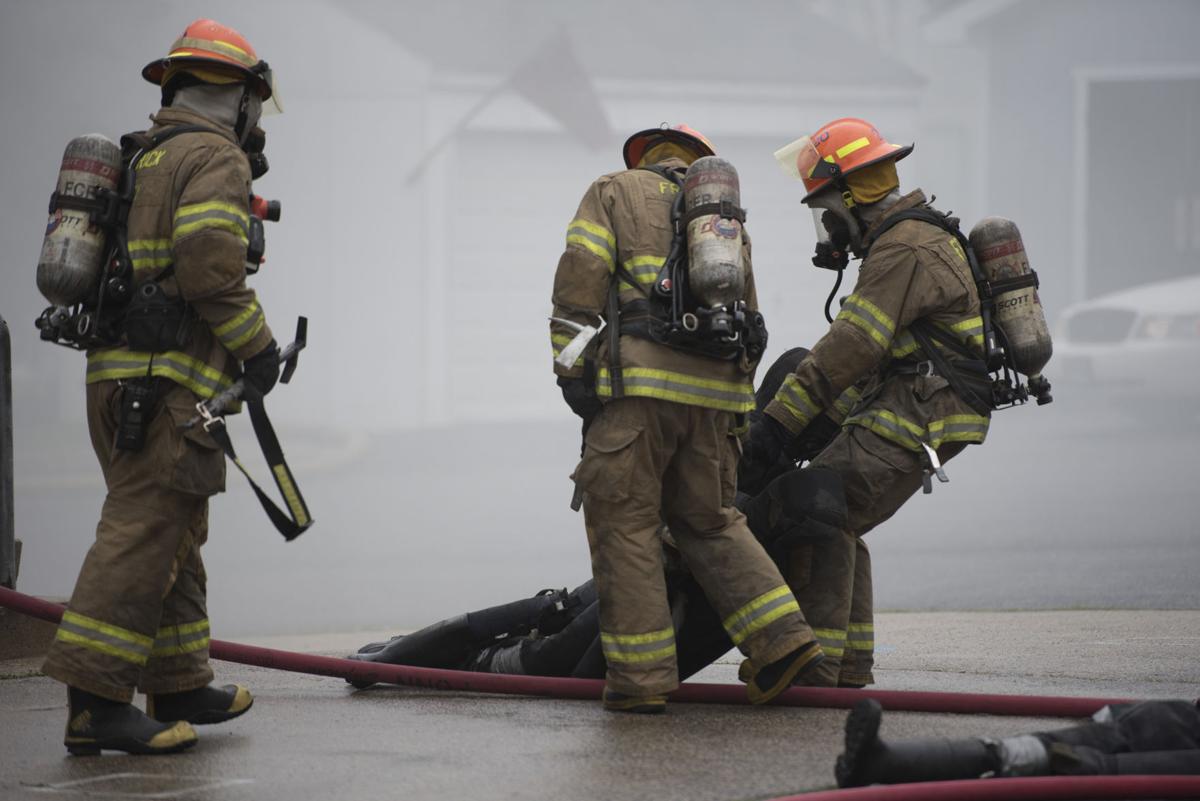 A recruit drags a mannequin from the burn building during an exercise simulating an emergency in which a firefighter has fallen through the floor of a building and needs to be rescued.

A recruit signals to a ladder truck operator that the bucket can be pulled away from a training building during an exercise simulating an emergency in which a firefighter has fallen through the floor of a building and needs to be rescued.

A recruit drags a mannequin from the burn building during an exercise simulating an emergency in which a firefighter has fallen through the floor of a building and needs to be rescued.

If the recruits in Frederick County firefighter Class 21 thought their instructors would take it easy on them on the eve of the last exam in their six-month academy, they had another thing coming.

About 15 minutes into a search-and-rescue operation with live smoke in the county training facility’s burn building, the radio suddenly exploded with emergency tones. After a brief pause, the recruits heard a scenario laid out for them that no firefighter in the field ever wants to face; a partial collapse had sent a fellow firefighter plummeting from the third to the second floor. Even worse, the firefighter — for the purposes of training, just a weighted dummy dressed in firefighter gear — was not moving.

Springing into action, the recruits executed a rescue plan that involved the use of ropes and sending a rescuer down to the collapsed section to secure their fallen comrade.

“It’s similar to what we call the ‘Columbus drill,’ which is what they practiced back in safety and survival class with Lt. [Keith] Hubble during the week of Feb. 5,” explained the class’ lead instructor, Lt. Mike Webb. “The difference is, this week, they’re going at it with live fire and smoke conditions, so it ups the ante.”

The recruits of Class 21 have been all about upping the ante since early on in their training, when they adopted their poker-themed slogan, “All in,” typically shouted in reply to the instructors’ prompt, “What’s the bet?”

During the last six months, the not-so-subtle reminder of what is at stake in an emergency has fueled the recruits and brought them much closer together as a unit, said recruit Ryan Bowe.

“In the beginning of the academy, no one knows what’s going on, everything collides and it just doesn’t work,” Bowe explained. “[But] after week after week, it gets better and better, and we’re at the point now where we’re just a well-oiled machine.”

His fellow recruit, Patrick Mangus, agreed, adding that each recruit has also grown individually, as well.

“I started out the academy completely out of shape, and I didn’t have a clue about anything fire-related, but I feel that I have come a long way,” Mangus said. “I’m in far better shape than I was, and I have a little bit more knowledge about fire, but it’s not something that you can learn in six months. It’s definitely a career-long knowledge course.”

Both young men are eager to take their first steps in a career with the fire service, and neither are likely to forget what they picked up at the academy, despite the fact that both Mangus and Bowe had previous experience as volunteer firefighters.

“My confidence level has definitely gone up, that is the biggest thing I’ve noticed. I’ve had previous experience, but the experience I got here does not compare to anything that I had before,” Bowe said. “I can go out in the field and be confident in my skills and what I need to do.”

The Firefighter II class the recruits were wrapping up last week built on the basic skills the recruits have picked up over the course of the academy, said Capt. Lenne Stolberg, the recruit training coordinator for the Frederick County Public Safety Training Facility.

Everything from maintaining good radio communication, a strong grasp of knots and ropes and teamwork goes into a complex and dangerous operation such as the Columbus drill, which was named for a technique developed by firefighters after Lt. John Nance, of the Columbus, Ohio, division of fire, died in an arson fire after a floor collapse on July 25, 1987.

Overall, the class’s improvements as individuals and as a team from day one to day 118 on Thursday have been “phenomenal,” Stolberg said.

“One of the main focuses that we have outside of getting them the instructional material and the education that they need is getting them to come together as a cohesive unit and establish teamwork,” Stolberg said of the training staff’s mentality. “… As we’re rounding out near the end now, we’ve seen them progress to where they were 24 individuals, and at this point we’re dealing with one collective group, who, for the most part, require very minimal supervision to get tasks done.”

The change was noticeable in the group’s ability to quickly and efficiently handle the curveball of the Columbus drill.

Within 12 minutes of the call being broadcast, the downed firefighter was safely extracted to the roof of the building by a team of recruits who were standing by as a Rapid Intervention Team for just such a possibility.

A short time later, the weighted dummy was safely on the ground outside the building after the RIT team passed him off to several other recruits working off of a rear-mounted basket truck that had lifted its bucket up to the edge of the roof of the burn building to facilitate the elevated rescue.

“Twelve minutes out of the building after the mayday, five minutes later he’s out and safe? That’s outstanding,” Stolberg announced as the group of soot-stained recruits debriefed out of the light rain under a large canvas canopy after the exercise.

But the captain wasn’t done.

“Now, what can we do better?” Stolberg asked next, refusing to allow the recruits to become complacent. “How can we improve on that?”

Standing at the entrance of the tent, Webb was ready with a critique of the operation leading up to the mayday call for the fallen firefighter.

As the first teams were battling a fire on the first floor, the search team somehow missed the mannequins Webb had set down in its first sweep.

“I couldn’t have made it any easier,” Webb said, gently chiding the group. “As soon as you opened the door, there was a pile of bodies right there, boom, boom, boom. How did you miss that?”

In a setting where valuable lessons are imparted every day, the most important lesson was that there is always more to learn and ways to improve.