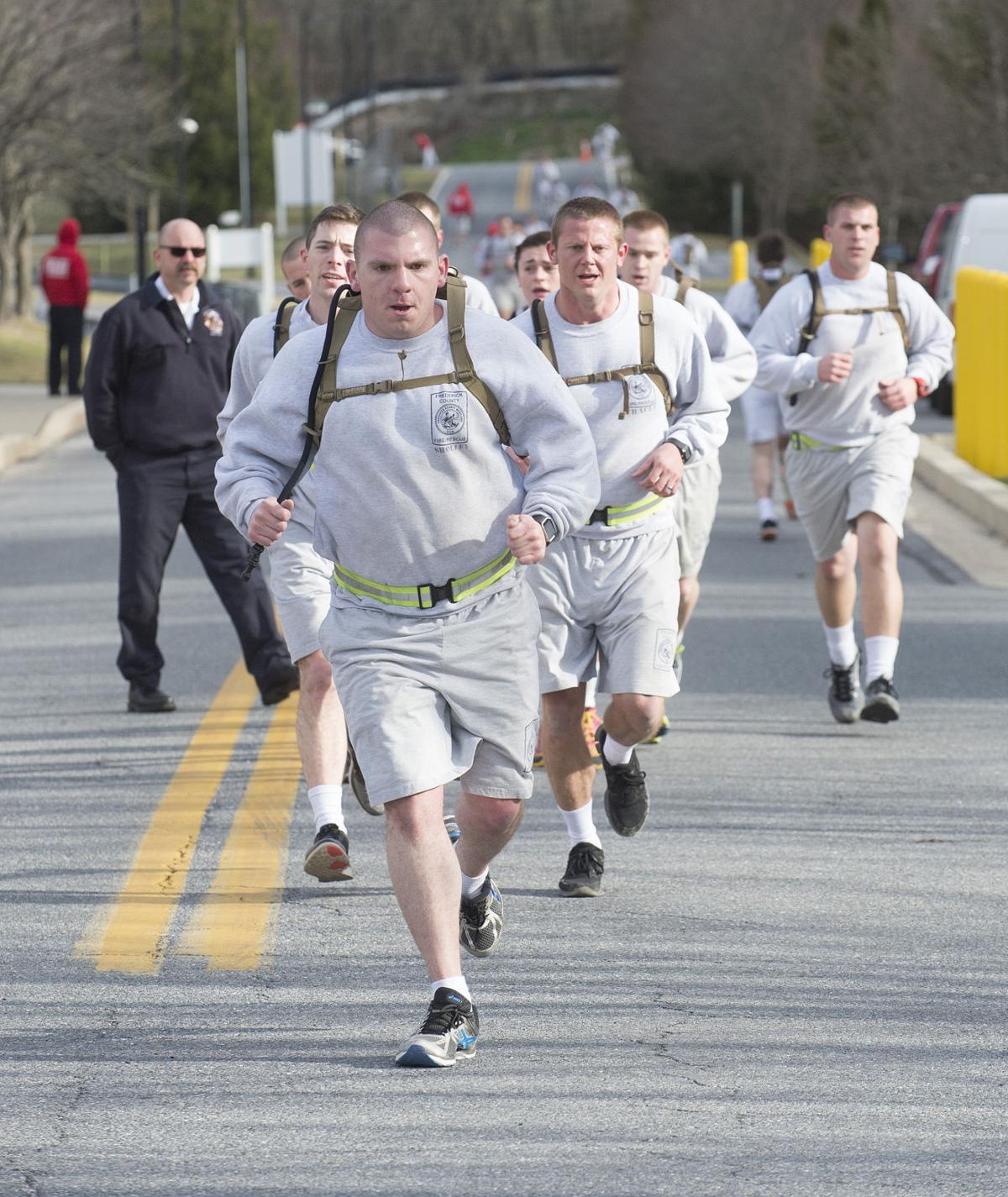 Members of the Frederick County Fire and Rescue Training Academy Class 21 run a mile and a half as part of their physical training testing last week. 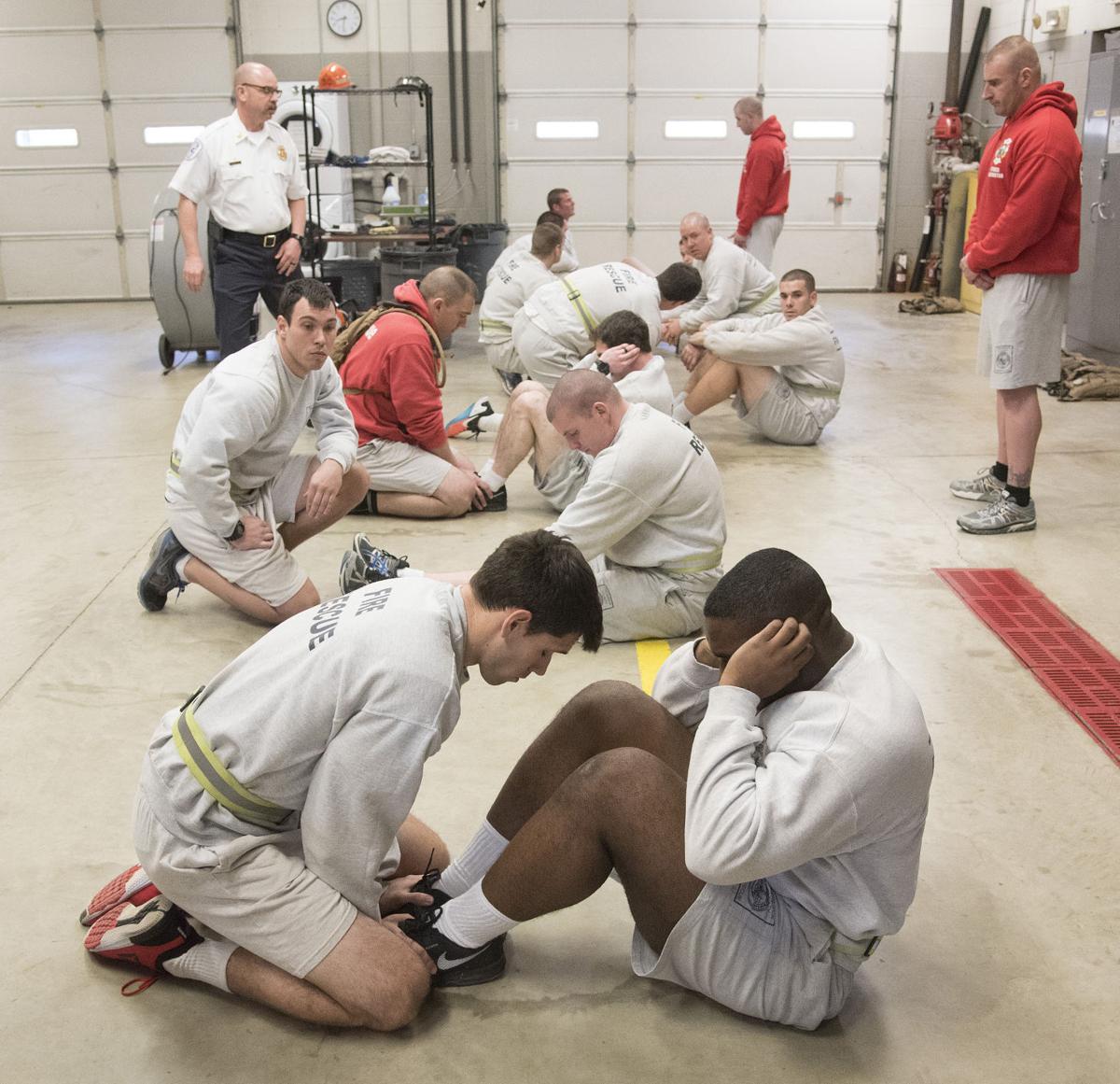 Members of the Frederick County Fire and Rescue Training Academy Class 21 run a mile and a half as part of their physical training testing last week.

As each firefighter recruit in class 21 finished a brisk 1.5-mile run Thursday morning, instructors Lt. Bob McCaa and firefighter George Lane were waiting for them at the finish line.

“Keep moving! Keep that blood flowing, recruit!” Lane shouted, giving the recruits encouragement, along with useful advice to stay on their feet.

“You should be hydrating!” McCaa chimed in as another group of recruits shot past the finish line. “Keep moving and take a sip of water, guys.”

Even as they kept up a constant banter with the recruits, McCaa, Lane and other instructors standing along the course at the public safety facility were keeping an eye on the thin tablets tucked under their arms. On each screen, the instructors had access to complete readouts of each recruit’s current heart rate and other vital signs.

Minutes later, as the class double-timed back to the hangar to close out the morning’s physical training, or PT, an SUV carrying medical supplies trundled along slowly behind them. A licensed paramedic was behind the wheel, ready to spring into action at the slightest sign of trouble.

From the length of the run to the instructors’ mindsets, high-tech readouts and on-site paramedics, nearly every aspect of Thursday’s PT session was markedly different from the way recruits were handled almost 15 years ago when tragedy struck at the training facility.

At about 8 a.m. on July 3, 2002, a 23-year-old firefighter recruit named Andrew James Waybright collapsed during physical training in the opening days of Recruit Class 6.

Waybright’s instructors immediately began CPR, but none of the instructors even had a radio; paramedics with access to more advanced lifesaving tools weren’t on hand, said Tom Owens, the current chief of the Frederick County Division of Fire and Rescue Services.

By the time Waybright was pronounced dead at 9:27 a.m., his core body temperature exceeded 107 degrees, according to the National Institute for Occupational Safety and Health report.

The cause of death was ruled hyperthermia, according to a Maryland Occupational Safety and Health report, which ultimately cited the academy for numerous unsafe practices. At the top of the list was the length and intensity of the workout leading up the recruit’s death, Owens said.

Waybright’s family sued the county, reaching a settlement deal in 2009 in the amount of $300,000, The Frederick News-Post reported previously.

"A lot of things went wrong at the same time; A lot of people who were trained to do the right thing, didn't do it," said Jim Waybright, Andrew's father, when reached for comment Tuesday.

"The support wasn't there. None of that support was there at that time, so it's certainly a lot better, now," Jim Waybright added. "Something good has to come out of tragedy, and the only good that came out of this for us was that no one will ever have to go through this again."

The academy was shut down for about two years. During that time, a culture that Owens described as outdated and overly militaristic was dismantled and completely reworked. Despite the discomfort caused by the tragedy, the fire service focused instead on the lessons learned from Waybright’s death, Owens said.

What emerged was a more professional regimen based on proven exercise science and preparedness, the chief said.

“We now require a student-to-fitness instructor ratio that did not exist before. We also require that the people who deliver our physical fitness training have all completed a peer fitness trainer certification program,” Owens said.

Before each morning’s PT session, recruits weigh in and record their blood pressure and heart rate for collection by the advanced life support provider designated to observe that day’s workout, Stolberg said.

“So, more or less on a daily basis, we clear them based on those vital signs and if any of the individuals have any issues, they’ll address it with the [paramedic] provider, who will then make a determination whether or not they feel it is safe for that individual to participate in PT that day,” Stolberg said.

The live readouts available on each instructor’s tablet help the training staff change up the workout according to each individual recruit, said Firefighter III Jason Patten, who oversaw the purchase and implementation of the new monitoring equipment while serving light duty at the academy as a PT instructor after an injury suffered in the field.

Totals are kept and analyzed against previous data to tailor future exercise regimens to each particular class, Patten said. Each tablet is linked via Bluetooth to chest strap monitors worn by the recruits that collect data, even if the recruits are out of range or in a low-signal area.

One of the main selling points of the new chest straps, which were just put into use at the academy for the previous class, was the ability for instructors to monitor live data, Stolberg said. The new monitors replaced a much less efficient system that was close to 7 years old, the captain said.

“Before this, all we used was a chest strap with a watch-style piece, and the only thing it captured for us was their heart rate,” Stolberg said.

Hydration — which several reports found was withheld from the recruits prior to class 6 as a form of discipline — is now not only encouraged, but mandatory, Owens said.

“Each individual recruit is equipped with what’s called a camelback, a water cell that they wear during all periods of physical activity, and hydrate at their leisure,” the chief said.

The facility’s restrooms are even decorated with charts that recruits can use to determine their water levels based on the color of their urine, Owens said.

From Owens’ perspective, it all goes to show how seriously his division takes the health and well being of recruits after Waybright’s death.

“It was a terrible lesson for us to have to learn that way, but we’ve learned that lesson well and we’re not going to forget it,” Owens said. “And on a personal basis, that’s a commitment that I have made to [Waybright’s] family.”

Turning to his office window, Owens pointed out the stone memorial at the front gate of the training facility that reminds all staff, recruits and visitors of Waybright’s legacy.

“That memorial at the end of the driveway gives us a visual reminder every time somebody comes in and out of this academy. ... There’s not a morning I come in here that I don’t look over at that monument for a moment as I’m pulling in here and remember Andrew and the lesson that he taught us.”

This story has been updated to add comment from Jim Waybright.