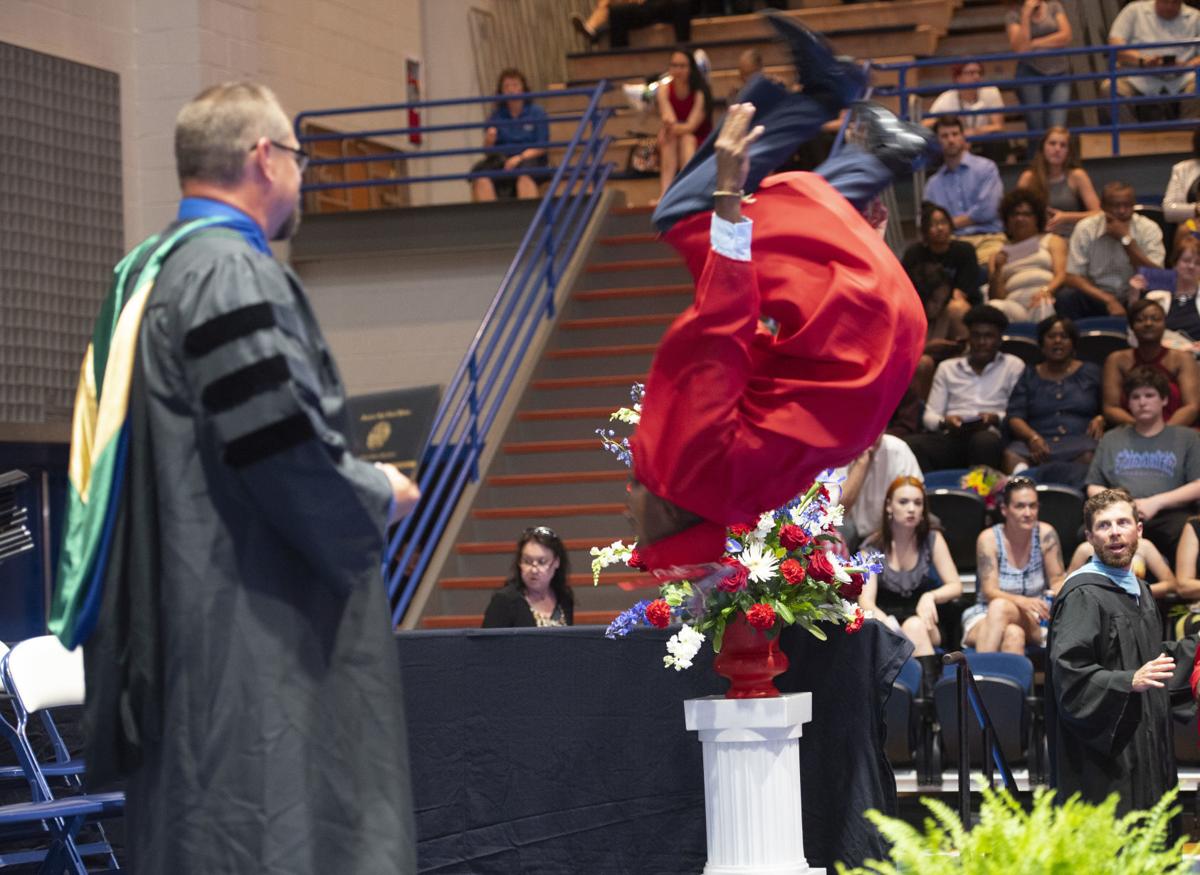 Nicholas DiVonte’ Coxson Stepney does a back flip before receiving his diploma Tuesday at Gov. Thomas Johnson High School’s commencement exercises on the campus of Mount St, Mary’s University. 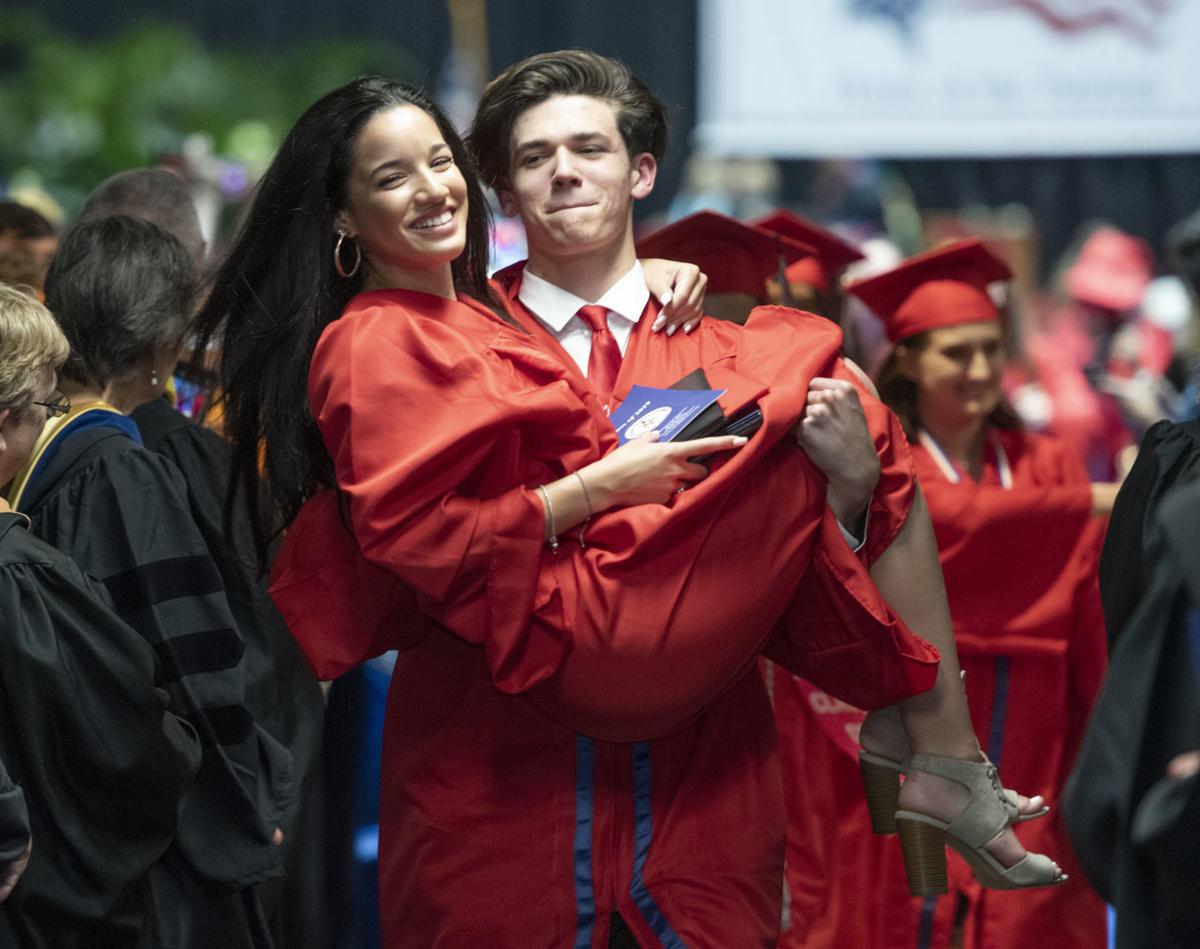 Nicholas DiVonte’ Coxson Stepney does a back flip before receiving his diploma Tuesday at Gov. Thomas Johnson High School’s commencement exercises on the campus of Mount St, Mary’s University.

When 18-year-old Brunel Berrys walked across the stage in Mount St. Mary’s University’s stadium at Gov. Thomas Johnson High School’s Class of 2019 graduation ceremony Tuesday evening, he had more than family cheering him on in the crowd.

Berrys, who moved to Frederick eight years ago from the Central African Republic, was one of the first seniors to graduate having benefited from a new college prep program run by the Housing Authority of the City of Frederick, which manages the Lucas Village public housing community where Berrys’ family lives. Besides organizing college visits, running an SAT prep course and keeping the students on track, the college prep program also provided Berrys with advice and help in getting scholarships.

“Before I got involved in the program, I honestly did not know that you could get money from your grades — for your schoolwork — I was oblivious to that, but they let me know and helped me with a couple of scholarships to apply to them,” Berrys said. “They would look for them and send them to me and help me with writing essays and applying for [the scholarships] as well.”

Thanks in part to the new program’s help, Berrys, who plans to study accounting at Mount St. Mary’s University in the fall, secured a total of $88,000 in scholarships from the Mount to help cover tuition and other expenses over four years.

Krisma Jackson, the Housing Authority’s youth services coordinator, attended Tuesday’s graduation to cheer on Berrys and other students as they passed a milestone on their journey into the future.

“For Brunel, Mount St. Mary’s was number one on his list of places to go, and with help from this program, he was able to not only get into his number one school but get scholarships as well,” Jackson said. She added that the Housing Authority’s program is now expanding to reach students even younger than Berrys, starting as early as eight grade.

Thousands of family members and supporters packed the arena Tuesday night to cheer on their own students, vying for the best seats and holding their cameras and cellphones high to record the occasion as the graduating class was introduced.

In one corner of the hot, crowded auditorium, several relatives wore matching T-shirts with the slogan “#TeamDestiny” branded across their chests, waiting for 17-year-old Destiny Greenwalt to be called.

“It’s the best thing ever, I’m beyond proud,” said Destiny’s mother, Saressa Greenwalt, gushing about her daughter, who is to attend Frederick Community College in the fall and plans to become a veterinarian. “She’s super responsible, not like most teenagers. She’s about her work and studying, and she’s graduating with honors.”

While Tuesday’s graduation proceeded as many others had before it, each student carried with them dreams, goals and memories as they crossed the stage.

“It feels weird, like all that time just flew by, but it was still a lot of fun,” said 18-year-old Joseph Barchi. “And we’re finally out of high school.”

Who was your favorite teacher? "Mr. [Thomas] Brown. He taught me math; algebra II and statistics."

What was your favorite subject? "Math ... really, anything Mr. Brown taught!"

What was your favorite memory of high school? "I would have to say the pep rallies and the basketball games."

What was the most challenging part of high school? "First going into high school knowing that it was nothing like middle school."

What are you doing post-graduation? "I will be attending Hood College in the fall to study biology."