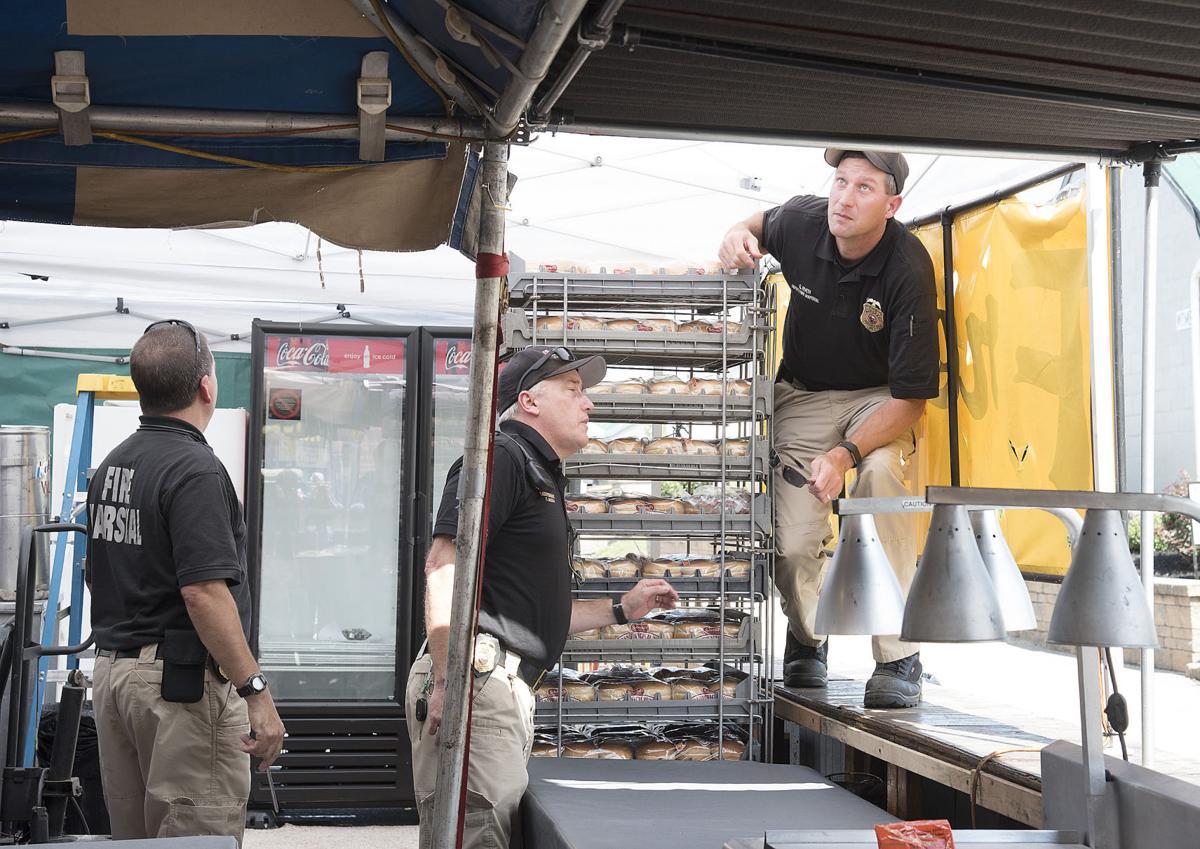 From left, Battalion Chief/Fire Marshal Kenny Poole, Lt. Charlie Green and Deputy Glenn Ruch, of the Office of the Fire Marshal, inspect food vendors equipment and structures Thursday before The Great Frederick Fair. Here, Ruch searches for the tag showing that a canopy is properly rated for fire resistance. 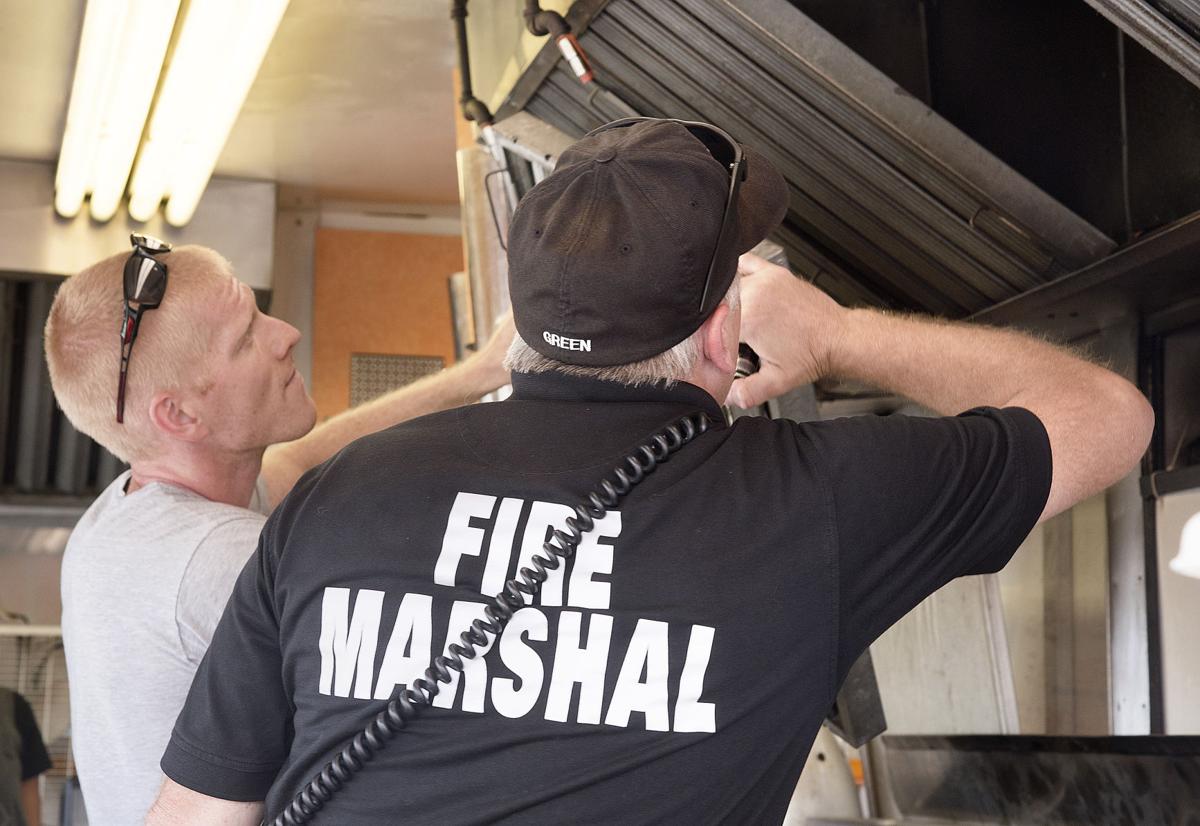 Lt. Charlie Green, of the Office of the Fire Marshal, inspects the grease trap in a food trailer owned by Sean Lepley, left, of Cumberland Valley Concesions. 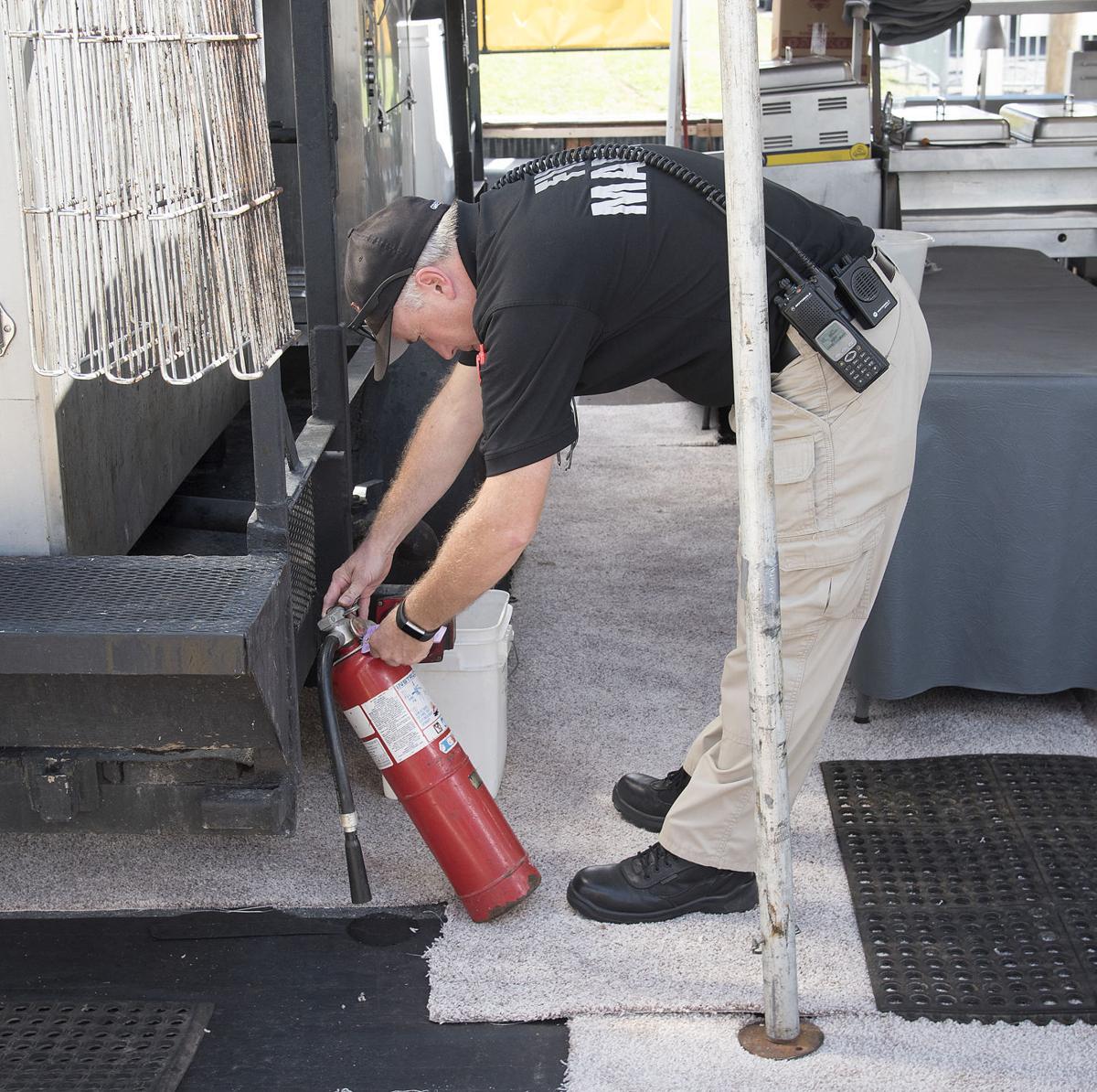 Lt. Charlie Green, of the Office of the Fire Marshal, inspects one of the food vendor stands Thursday at The Great Frederick Fair.

From left, Battalion Chief/Fire Marshal Kenny Poole, Lt. Charlie Green and Deputy Glenn Ruch, of the Office of the Fire Marshal, inspect food vendors equipment and structures Thursday before The Great Frederick Fair. Here, Ruch searches for the tag showing that a canopy is properly rated for fire resistance.

Lt. Charlie Green, of the Office of the Fire Marshal, inspects the grease trap in a food trailer owned by Sean Lepley, left, of Cumberland Valley Concesions.

Lt. Charlie Green, of the Office of the Fire Marshal, inspects one of the food vendor stands Thursday at The Great Frederick Fair.

When Barb Sharlow started at Coy’s Concessions, a longtime food vendor at The Great Frederick Fair, she felt a bit anxious about health inspections.

“A little nervous, I’d say,” said Sharlow, now the operator of the concession stand. “You’d just want everything to be perfect.”

Sixteen years into the job, though, she’s grown used to the yearly assessments.

“Now you know what they expect and you just want to have everything ready to go,” Sharlow said. “I’ve never had one inspector who wasn’t nice.”

Niceness — and a friendly give-and-take — is what inspectors with the Frederick County Department of Health hope to bring to their evaluations at the start of The Great Frederick Fair, said Wendy Cochran, the department’s food program manager.

Inspections are technically conducted on a pass-or-fail basis, but it’s almost unheard of for a vendor to be shut down, Cochran added. Instead, inspectors do their best to issue corrections and offer guidance on how to solve problems, rather than simply denying a permit.

“I think once, a couple years ago, a vendor did shut down because he just didn’t want to comply,” Cochran said. “But generally, the goal on both sides is to have a good, amiable relationship. Vendors never really want us around, but our desire is to have a good rapport.”

For vendors and inspectors, temperature is often the key to a successful stand. Health Department requirements call for meats, seafood and eggs to be cooked to a minimum of 145 to 165 degrees (depending on the product) and maintained at a minimum of 135 degrees. Perishable foods, on the other hand, must be kept at or below 41 degrees.

At Hemp’s Meats, another mainstay at the fair, employees are equipped with meat thermometers to test the temperature of cooked products. Sauces and condiments are kept on ice so they stay cool, said Billy Hemp, owner of the stand. After more than 30 years at the fair, the stand is comfortable with health requirements, he said, though there is some variance from year to year.

“Temperature is really the most critical part, but sometimes one inspector may focus on certain things more than another,” Hemp said. “Even something as simple as, ‘Oh, your ice is melted too much.’ But we’ve had a lot of experience with regulators over the years and they don’t usually ask for something that doesn’t make sense.”

For Jacqui McGrady and Kenethia Charity, two inspectors issuing permits on Friday, hand-washing is also a major point of attention. Vendors with running water are required to provide a designated hand-washing sink. Other stands can get away with temporary hand-washing stations — usually made from sanitized Igloo water jugs — that include spigots and a catch basin. All vendors are required to use liquid pump hand soap, though, and remove all lower-arm jewelry other than wedding bands.

While all vendors must be approved and permitted before they can sell food, health inspectors must follow up on customer complaints and conduct last-minute site inspections, Cochran said.

While the department encourages vendors to submit their temporary permit applications at least two weeks in advance, some operators invariably apply only days before the start of the fair, or even midway through. And sometimes, food vendors manage to slip through the cracks. Last year, inspectors had to temporarily shut down DC Dills — an artisan pickle company — after they discovered that pickled vegetables were being kept at room temperature.

The department later realized that the company was operating without a license, Cochran added, because it was listed as a sampling station and not a food vendor.

“They had to throw away pounds of product and then re-set up with a site inspection,” she said. “I can’t imagine how much money they lost.”

At other times, inspectors face the uncomfortable task of issuing citations after unfavorable reports. Last year, the department had to investigate Chesapeake Foods — another regular vendor — after a customer complained of an employee who refused to put gloves on before preparing a sandwich. Such problems can generally be solved quickly, Cochran said, but that doesn’t mean vendors are always happy about it.

“Being a health inspector, no food business is really excited to see you,” she added. “If we don’t find violations, we’re not doing our job, but it can be hard for some people to let that roll off.”

On the Friday before the fair, though, most vendors seemed to welcome inspectors as they stopped in and out of stands. For Moses Eldridge, owner of Uncle Moe’s Soul Food, the process was a layer of protection for sellers as well as fairgoers.

“It’s covering our behinds, too,” Eldridge said. “We have a million and a half [dollar] insurance policy against people getting sick, so they’re helping us out.”

I'm in love with the Traditional Authentic Mexican Food truck/stand, directly across from the mechanical bull ride that's right next to the Beer Garden. Really great fresh food and super nice people who run the place. Of course Hemp's is a winner too.

I saw the mexican truck last night. I'll check it out, maybe tomorrow. I do Hemps on the last Saturday.