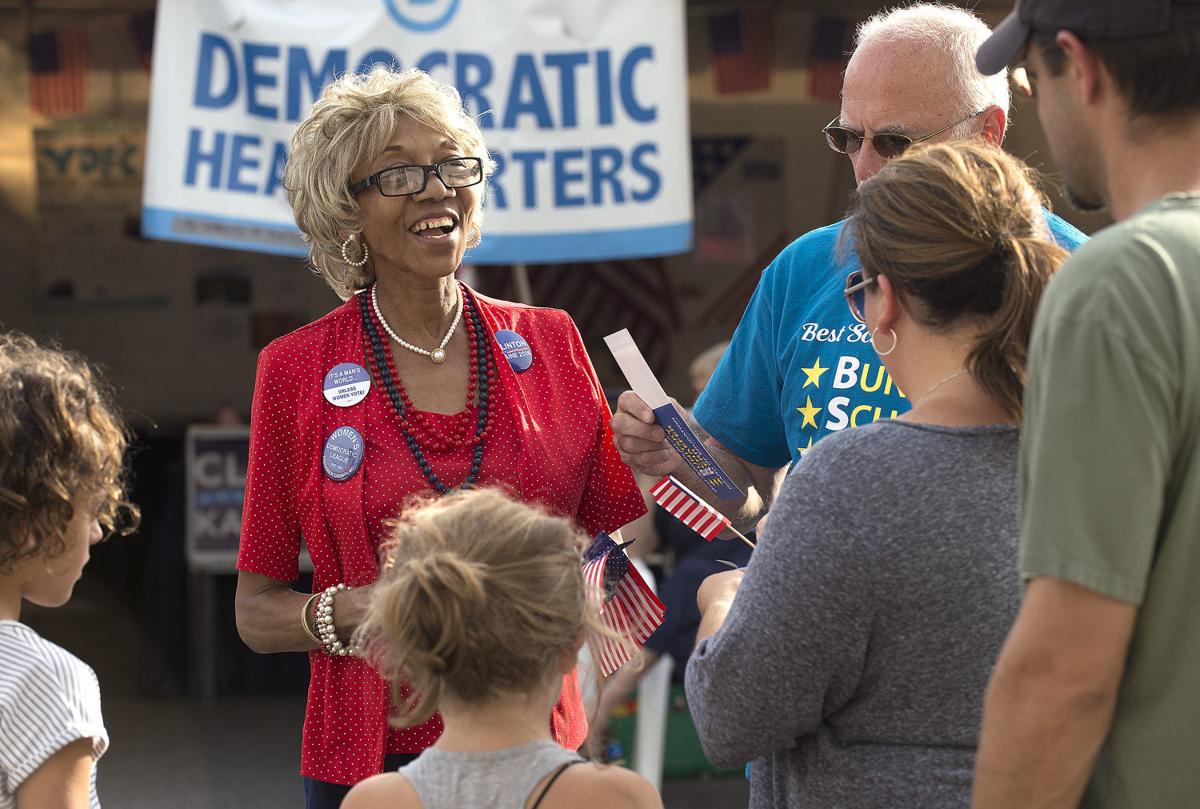 Renee Smith, left, of Thurmont, volunteer tent leader at the Democratic tent, and Board of Education candidate Ken Kerr talk to voters in 2016 at the Great Frederick Fair. 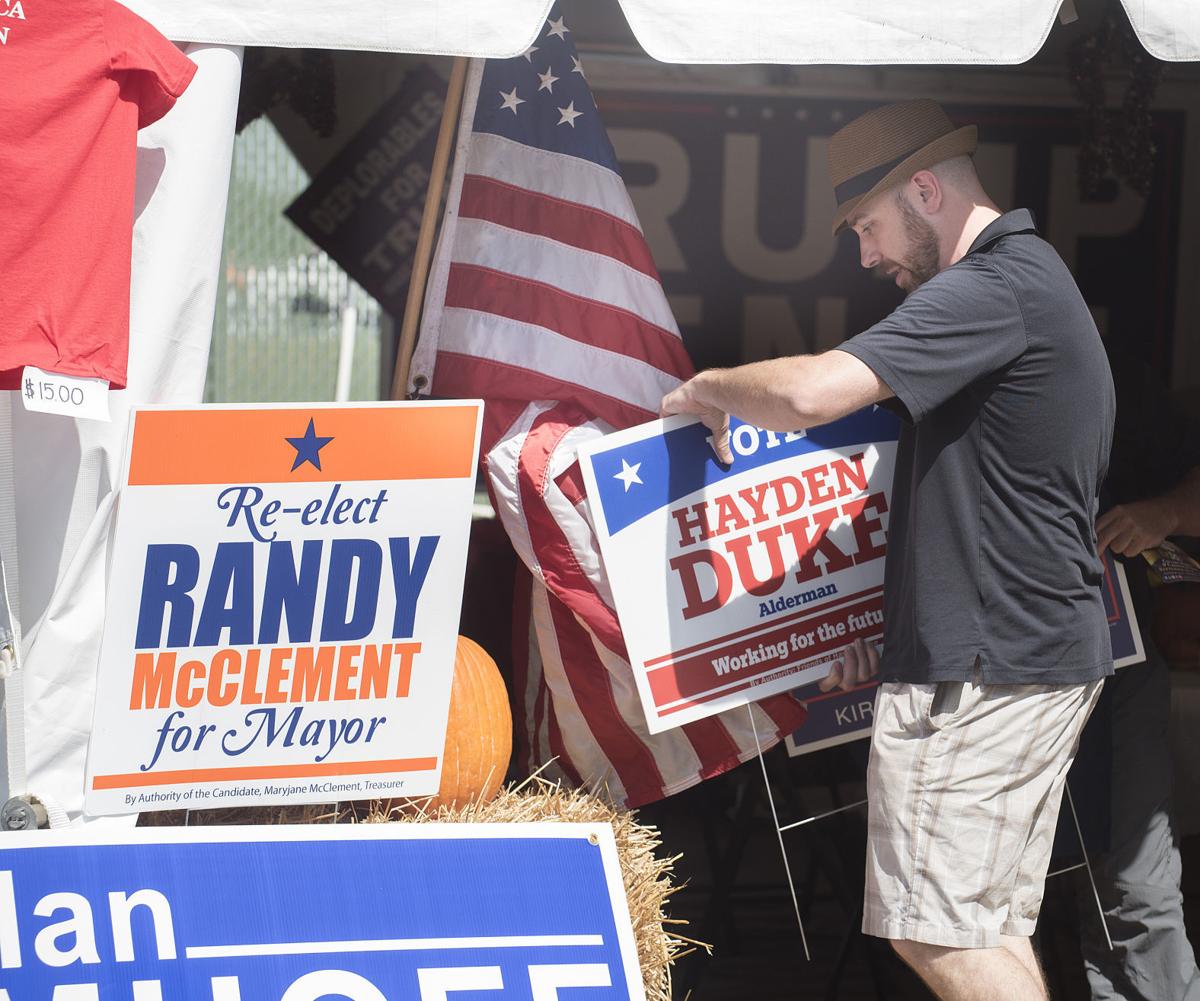 Renee Smith, left, of Thurmont, volunteer tent leader at the Democratic tent, and Board of Education candidate Ken Kerr talk to voters in 2016 at the Great Frederick Fair.

Amid all the activity on the Great Frederick Fairgrounds this past week, most of the political discussion centered around two tents near the grounds’ grandstand.

Republicans said they were mainly focused on two things: rallying support for President Donald Trump and for Sheriff Chuck Jenkins and the 287(g) program.

Joe Parsley, a member of the county’s Republican Central Committee, said those topics were the main point of conversation this week at the Republican tent.

But people seem more interested in the national landscape than the local issues, Parsley said.

“I think you have a vocal minority of people, and it’s on both sides, that are really, really involved and the general population, I think it would benefit them to try and learn a little bit more,” he said.

Still, others were using the fair as a chance to relax from last year’s election cycle, and converse with constituents about various issues. That included Del. Ken Kerr (D-District 3B).

“The situation is kind of reversed,” Kerr said of this year compared to last. “We’re no longer campaigning, now we’re just doing the job, just working the district, working the county.”

One long-time attendee, however, thought some of that constituent outreach was similar to last year.

“You’re getting similar questions about what’s going on in county government … but you’re meeting people, and they just want to talk about what’s current and what’s going on,” said Council Vice President Michael Blue (R). “The only thing I don’t have are my pens and my stickers and promotional stuff when you’re a candidate.”

The fair is also a chance for active citizens and political groups to inform fairgoers about current issues. Dick Kessler, a Frederick resident, has been coming to the fair for more than 70 years.

Kessler said much of his focus is on national politics, and he sensed there is more of a current political divide between Democrats and Republicans.

“On a very generic basis, I think more and more people are tuned into it,” Kessler said. “And you’re in favor of the Republican/Trump, or you want to get him out of office, and that’s what the goal is right now.”

Sherry Snyder, president of the Republican Women of Frederick County, said locally, the issue is the 287(g) agreement between Sheriff Jenkins and ICE.

Many Republicans feel the program is effective; Democrats question whether it’s being enforced properly and whether it’s needed at all.

“If we don’t leave this fair and have, between the Republican Club and the Women’s Club, 20 to 30 new members, I will be shocked,” Snyder said.

Overall, however, multiple officials said they felt this year’s atmosphere was calmer. Several state officials made stops during the week, including Comptroller Peter Franchot, Insurance Commissioner Al Redmer Jr. and Secretary of Commerce Kelly Schulz. Schulz was part of a team that won one of the harness races on Wednesday on the grounds’ main track.

County Executive Jan Gardner (D) said she feels the fair serves as a good opportunity for her to talk to constituents about various county issues.

Both her and Blue said it’s important to recognize the event’s agricultural aspects.

“I think people like to come see that traditional part of the fair,” Gardner said. “It is the biggest agricultural classroom in the county, and it really is to advertise the importance.”

The atmosphere at the fair this past week seemed to revolve around not politics, but those agricultural events, the rides and overall hustle and bustle. There was little to no rain all week, and thousands meandered around the grounds every day, a sign of the event’s enduring popularity.

Of course the FNP would shut down the Comments section on the real story about the Fair — the story they would rather not talk about — the story about a bunch of feral, thug teens who killed an innocent man. It is sickening to see what is happening in our community and what this place has become.