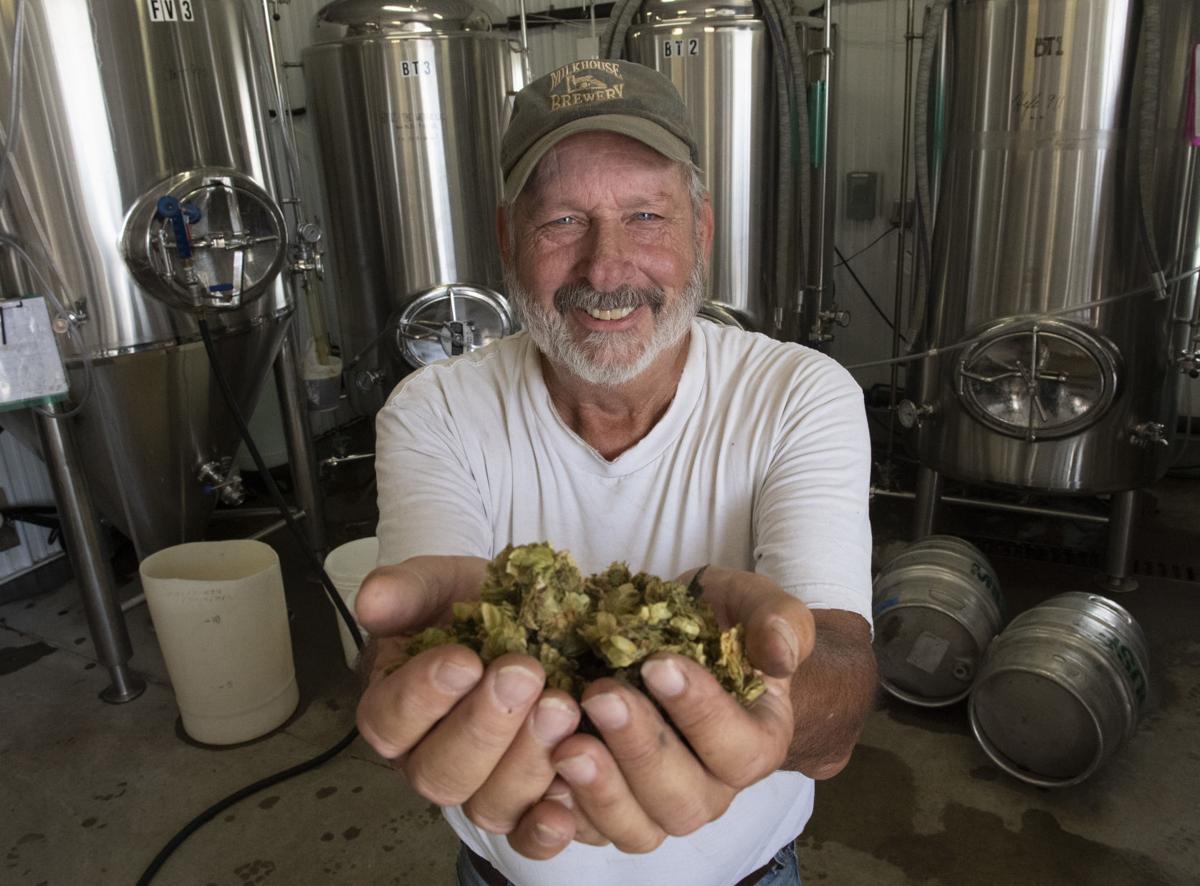 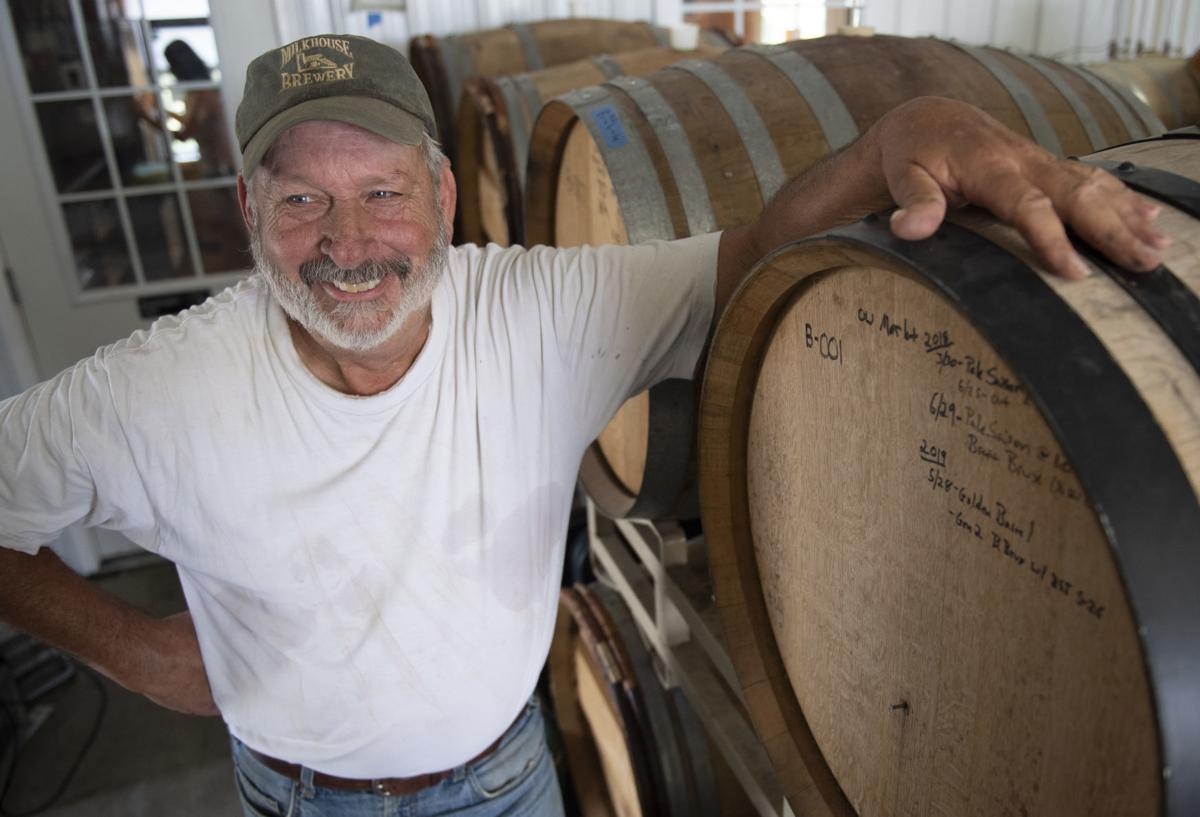 When it comes to making beer, Tom Barse keeps more than 90 percent of his ingredients local.

He grows an acre of hops on Stillpoint Farm near Mount Airy. The yeast for some of his beer also comes from the farm. The grain comes from another farm in Howard County.

Brewers want those local hops, yeast and grain, Barse said. The problem is supply can’t keep up with demand.

“There is a market for farmers to grow beer ingredients to sell to brewers, it’s at the very beginning,” Barse said. “Unless you’re the farmer with the ability to store dry grain and you can hold it until the malthouse is ready to malt it for you … the little malthouses, they can’t store your grain.”

Barse has owned Milkhouse Brewery for more than five years, and is one of about a handful of farm breweries throughout Frederick County. Overall, the county has the most breweries in the state.

Brewers and farmers said last week they were optimistic about that market. But there are challenges, including whether local agriculturalists can keep up with demand.

Greg Clabaugh, a dairy farmer in Keymar, also runs a Amber Fields Malting and Brewing, a malting operation which produces 2,000 pounds of malt a week.

Clabaugh understands the demand for malt and other ingredients, and the discussion for a regional malthouse, which has occurred between farmers and local officials.

He added, however, that it’s important for farmers to maintain quality, and that brewers are expecting a good product when they purchase grain or malt.

“If I’m buying grain from a farmer, I want to know exactly how it was produced, and I want some kind of guarantee it was produced to my specs,” Clabaugh said. “Because if you have a grain bin and you’re taking all this barley in and you put one or two bad loads of grain in the bin, the whole thing is shot because there’s no way to tell which is good and bad.”

Tom Mullineaux, seed business manager for Eddie Mercer Agriculture Company, said there’s another issue when it comes to malting: growing the right type of barley for malt used in beer can be tricky.

“This aspect of getting barley, two-row barley to meet that quality [specification] is a real difficult task,” Mullineaux said.

David Blackmon, owner of Smoketown Brewing in Brunswick, buys a lot of his malt from both Clabaugh and Dark Cloud Malthouse in Howard County.

He buys local when he can, but pointed to another ingredient as an issue locally: hops. Those come from Washington, Michigan and elsewhere nationwide, he said.

“It’s ironic because Maryland’s a great spot for it weather-wise and climate-wise. We’re hoping the state gets involved and sees the value in subsidizing these farmers so we can see more and more hops,” Blackmon said. I’m very big on keeping dollars in the state … the more you keep it in your state, the better.”

One brewer takes a different approach when it comes to local ingredients. Jim Steinhardt, owner of Steinhardt Brewing, said he buys fruit purees and honey from McCutcheon’s in Frederick.

Steinhardt said he sources his grain, hops and other ingredients from around the world. He added, however, that doesn’t mean local farmers can’t grow good ingredients locally.

“Certain things grow well in different climates, like Napa Valley is good for certain types of wine,” Steinhardt said. “So they have to figure out the types of hops and barley that will grow well here.”

No matter what brewers buy their ingredients, they and farmers agreed the craft beer scene countywide doesn’t appear to be slowing down.

“Frederick City is definitely key to this market … Frederick County has just become a destination spot, and the city’s on fire,” Blackmon said.

Barse believes there is more room for breweries, given local demand. Steinhardt agreed with that.

“It’s a marketing thing, people love the whole farm to table movement, the field to pint idea, I mean people like to know where their food comes from,” Barse said. “That’s what we’re doing here.”

“I think it’s sort of a center of gravity ... the fact a lot of breweries have popped up here has made it a destination,” Steinhardt said. “There’s enough people out there to support it, and there’s enough variety between the different breweries as well.”

Tom, Hope all is great! We’ll be at Milkhouse some weekend soon.