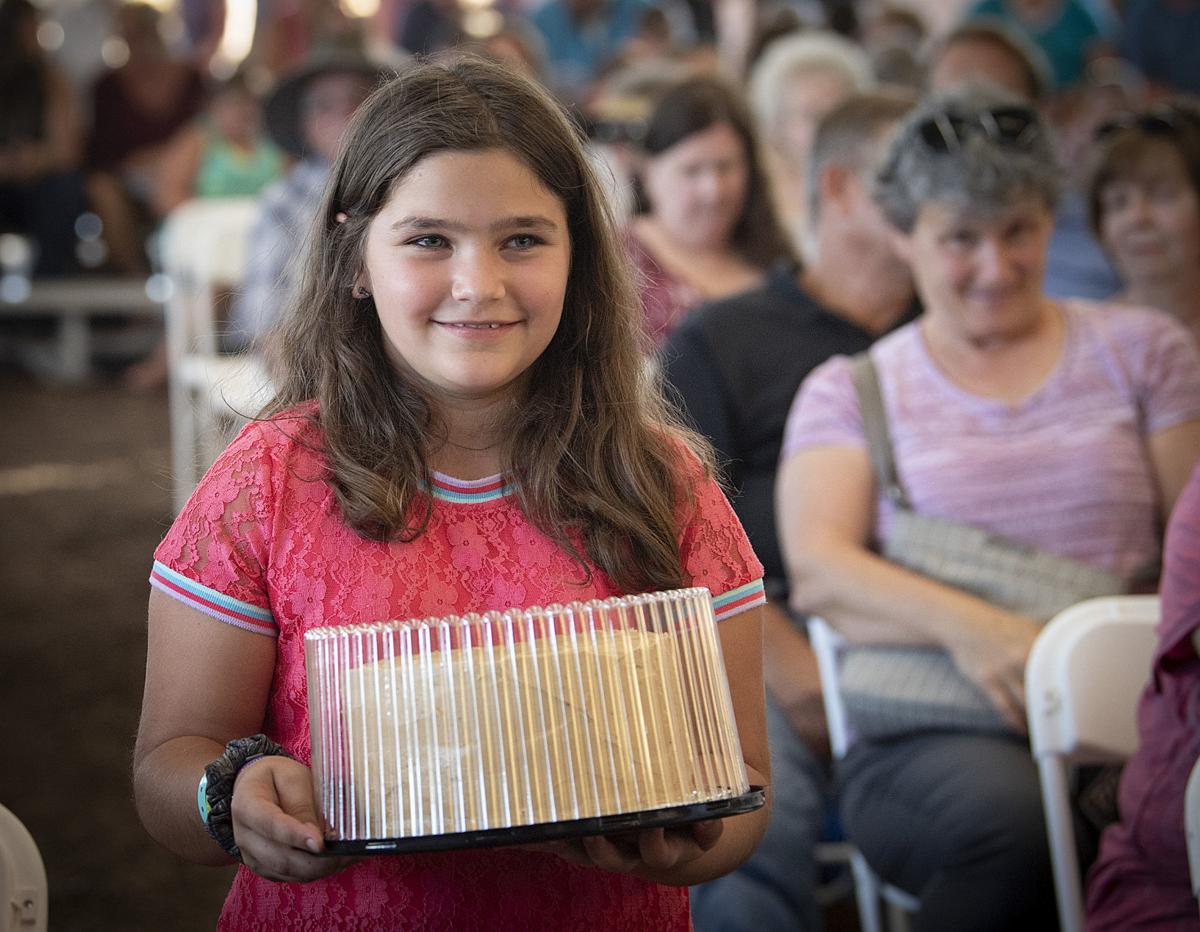 Josie Martin walks her cake through the bidders as the auctioneer yells out for bids on her 4-H Overall Grand Champion cake Sunday night at The Great Frederick Fair. The cake sold for $5,100. 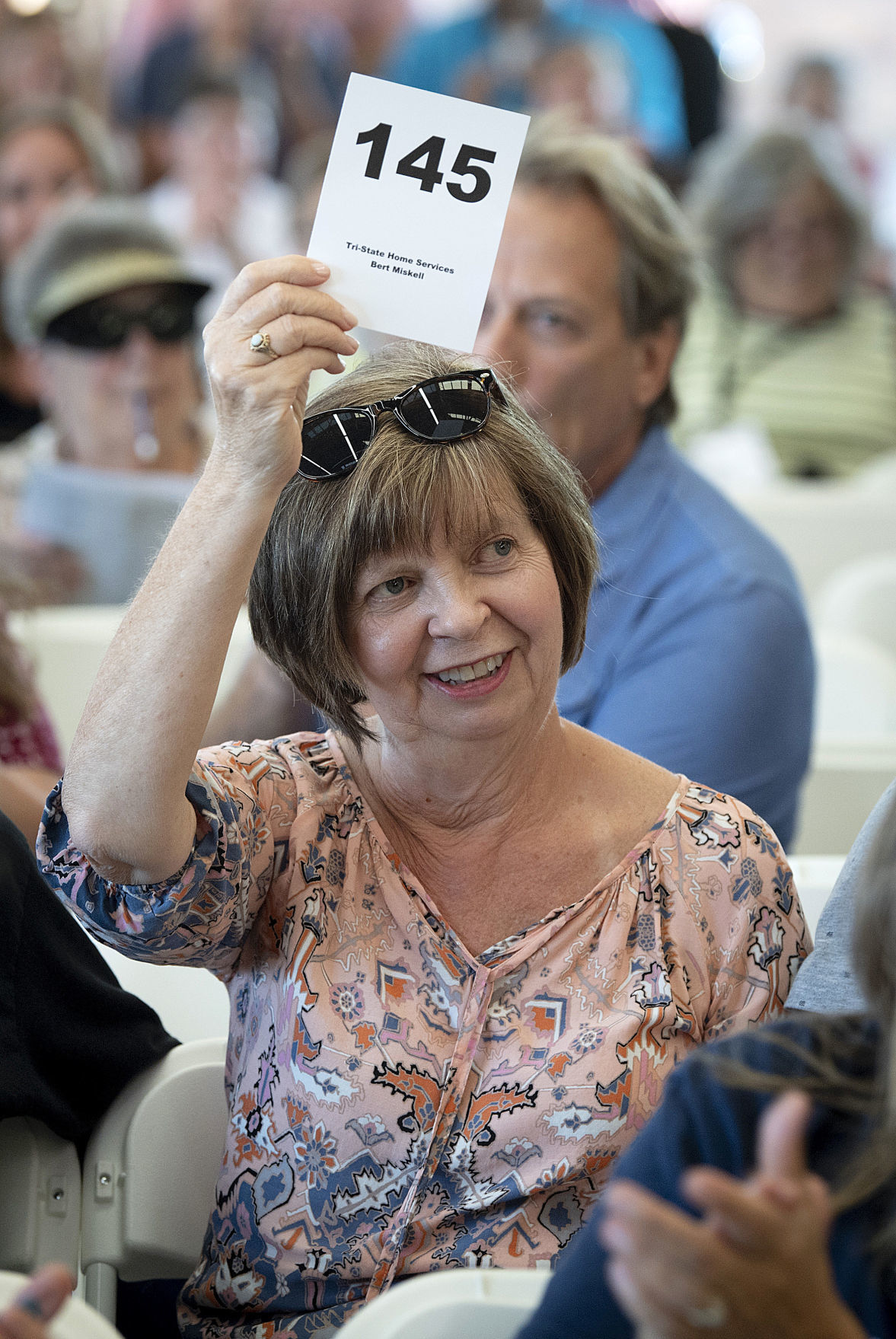 Josie Martin walks her cake through the bidders as the auctioneer yells out for bids on her 4-H Overall Grand Champion cake Sunday night at The Great Frederick Fair. The cake sold for $5,100.

As the sun began to set over the Frederick Fairgrounds on Sunday evening, people piled into the South Side Beef Barn to spend their money on cakes and baked goods. Some ended up spending in the thousands.

It was the annual 4-H/FFA — Future Farmers of America — cake auction at The Great Frederick Fair.

With the smell of manure blowing into the barn from the nearby stalls, cakes, pies, and cookies were sold for a range of prices.

All the goods are baked by members of local 4-H/FFA clubs and judged before being auctioned.

Josie is not the first in her family to win Grand Champion. According to her mother, Jennifer Martin, both of Josie’s older siblings won Grand Champion for their cakes as well, and it’s all thanks to one member of the Martin family.

“They need to thank their grandmother,” Jennifer said. She explained that Josie’s grandmother was instrumental in teaching her how to bake. It was also her recipe that Josie used to win the title of Grand Champion.

Josie said the cake took about a half-hour to 45 minutes to bake and that she never thought it would win such a high prize. She was excited when she found out.

“I don’t think she fully understands how momentous this is ... but it is very exciting for her,” Jennifer said.

When asked how much she hoped her cake would sell for, Josie said $100.

It surpassed that by miles, eventually selling for $5,100 to Bert and Sue Miskell from Tristate Home Services, a local heating, and air conditioning company.

“We come every year to support the program and I think we just get swept into the whole thing,” Sue said.

The sale was a tense one, coming down to the Miskells and one other buyer. Each grand champion cake the past few years have sold for at least $5,000 and when the bidding started at $3,000 for Josie’s cake but then had to drop to $2,000, it was not looking promising.

“C’mon people get some partners together for this one,” yelled one of the auctioneers.

The Miskells have been attending the cake auction for the past 15 years and usually bid on the grand champion pie — which this year is a blueberry pie made by Brenden Arnold, from the Calico Clovers 4-H club.

However it seems this year, the Miskells really did get swept up into the excitement of the cake bidding.

This is the most they have ever spent at the cake auction and said they were most likely done bidding for the night but were very happy with their purchase and the support the event gives to 4-H.

“[4-H] is so important for kids to have opportunities,” Sue said. “It’s not just for farmer kids, it’s for all kids.”

Jennifer felt the same way, saying most people don’t realize why events such as the auction are so important.

“What most people don’t understand about [the 4-H] program is the money that’s raised here at the auction actually comes back to the kids and pays for things like entry fees for contests,” Jennifer said. “So this is very important, it’s supporting our Frederick County kids and giving back to them.”

Tomorrow the chocolate buttermilk layer cake with peanut butter frosting will be taken into the Tristate Home Services offices and shared amongst employees.

For Bert however, there is still one more hurdle to get through.

“I’m going to have to explain this to my accountant,” he said with a laugh.

"With the smell of manure blowing into the barn from the nearby stalls, cakes, pies, and cookies were sold for a range of prices." Great writing.

Are you saying that the writing stinks, three?

Congratulations, Josie. Not everyone can say they’ve been so successful so soon. Best of luck to you in whatever current or future passions you choose to pursue.