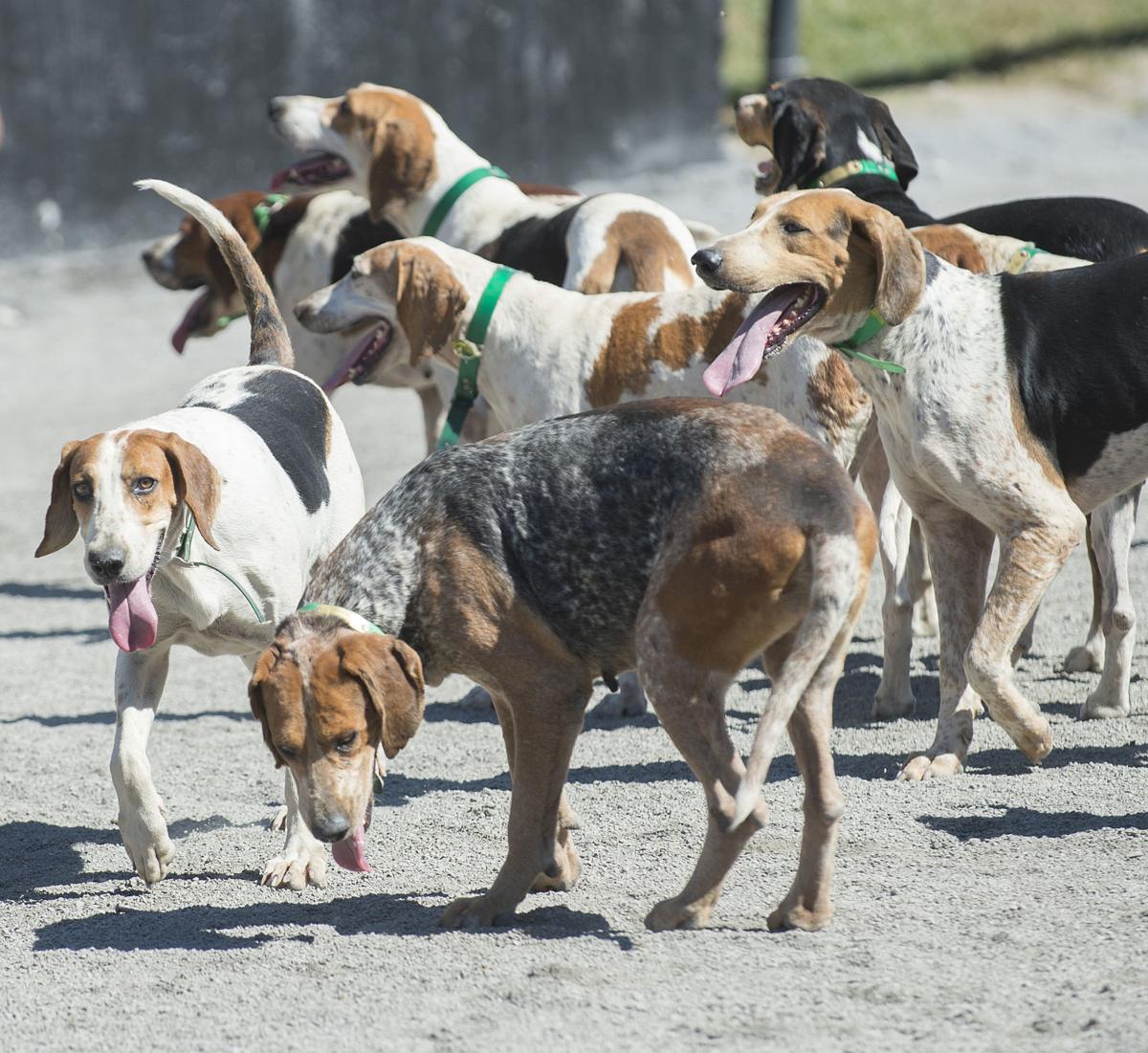 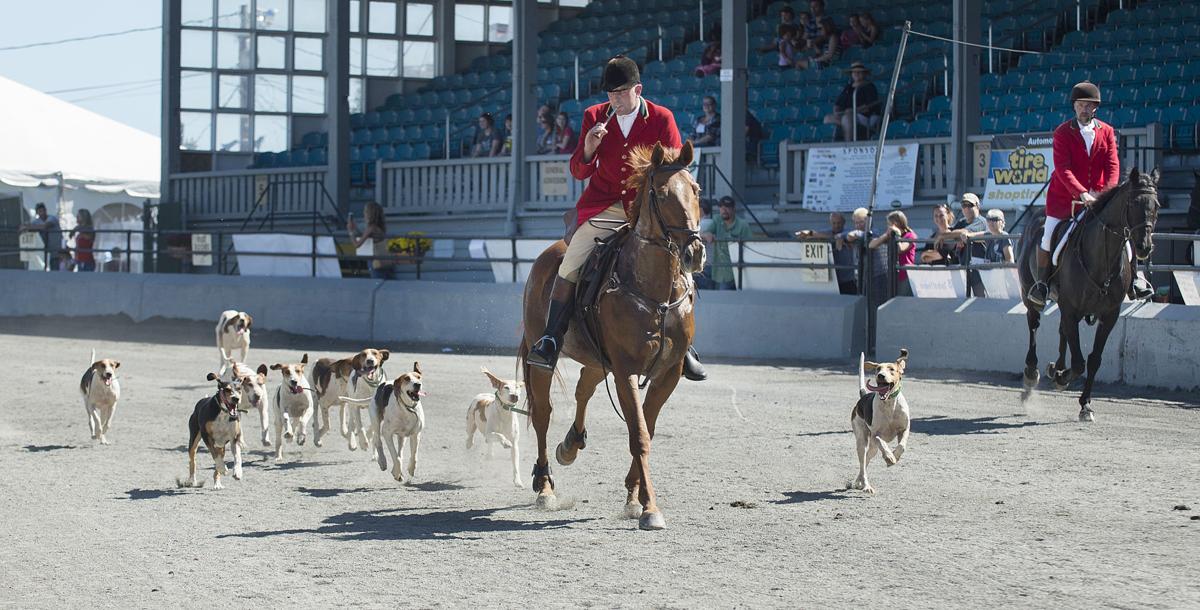 Alasdair Storer, a huntsman with the New Market Middletown Valley Hounds, blows his hunting horn Saturday as he and a pack of hounds pass the grandstand at The Great Frederick Fair. The local group presented a demonstration of skills the group use on fox chasing outings.

Alasdair Storer, a huntsman with the New Market Middletown Valley Hounds, blows his hunting horn Saturday as he and a pack of hounds pass the grandstand at The Great Frederick Fair. The local group presented a demonstration of skills the group use on fox chasing outings.

In the grandstand at The Great Frederick Fair, Alasdair Storer raised a hunting horn to his lips and gave a few short toots. A pack of hound dogs ran at the heels of his horse, tongues lolling eagerly out of their mouths.

Storer, a member of the New Market-Middletown Valley Hounds, was leading the club’s first-ever demonstration at the fair, an effort to introduce more of the public to the sport of fox hunting. The pastime has existed in Maryland since Europeans first colonized the state, but these days, it’s more a pursuit than a hunt, said Grace Pariso, a joint master for the club.

“Back in England, of course, foxes were a nuisance, but what we do is really a fox chase,” Pariso added. “We’re chasing the scent of the fox. Our hounds are not trained to kill.”

In other ways, though, the Valley Hounds — now in their 52nd year — are all about tradition. On hunts, club members wear formal attire, including the bright red jackets donned by huntsmen and whippers-in, group members who command and corral the hounds. Storer, a huntsman, uses his horn to convey different orders to the dogs, while “whips” prevent them from straying from the cover, or area where the fox could be hiding.

Like any good in-group, the club also has its own distinct rules and customs. Any adult member who falls off his or her horse during a hunt is responsible for bringing a bottle of wine to the next event, Pariso explained. Kids, on the other hand, bring a two-liter bottle of soda.

The dogs and horses used in the hunt also have a distinct pedigree. At the Saturday demonstration, Storer and his two whips rode Thoroughbreds, an English breed used mainly for racing, dressage and foxhunting. The hounds, on the other hand, are distinctly native. The group relies on a handful of different breeds, Pariso said, including American Foxhounds and Penn-Marydels, a hunting dog bred specifically for the Eastern Shore region.

“They have a better nose, a different voice,” Pariso added. “We also use crossbreeds, and might have one dog bred for endurance and another dog bred for speed.”

The club’s junior members, who tend to ride more diminutive ponies, shoulder much of the responsibility for training the dogs. Hound puppies are generally hosted by families in the club who acclimate them to farm life and teach them basic commands. Younger Valley Hounds also compete with the hounds in dog shows, said Lily Adams, 14, a junior member.

Whether consciously or not, younger group members are also responsible for carrying on the traditional sport. Sometimes that means working to prepare their ponies for the hunt, which can come with its own set of challenges. During every chase, the horses encounter a pack of dogs and a slew of natural distractions, which can take some getting used to.

“When I first started with her, she was a little bit scared of the hounds, but she’s not anymore,” said Olivia Adams, 12, gesturing to her pony, Coco Chanel. “It just takes practice.”

Another thing that takes practice? The morning hunts, which tend to start at 7 a.m. at the beginning of the season.

“That’s the hardest part,” said Amanda Carstens, 15. “Getting up in the morning.”