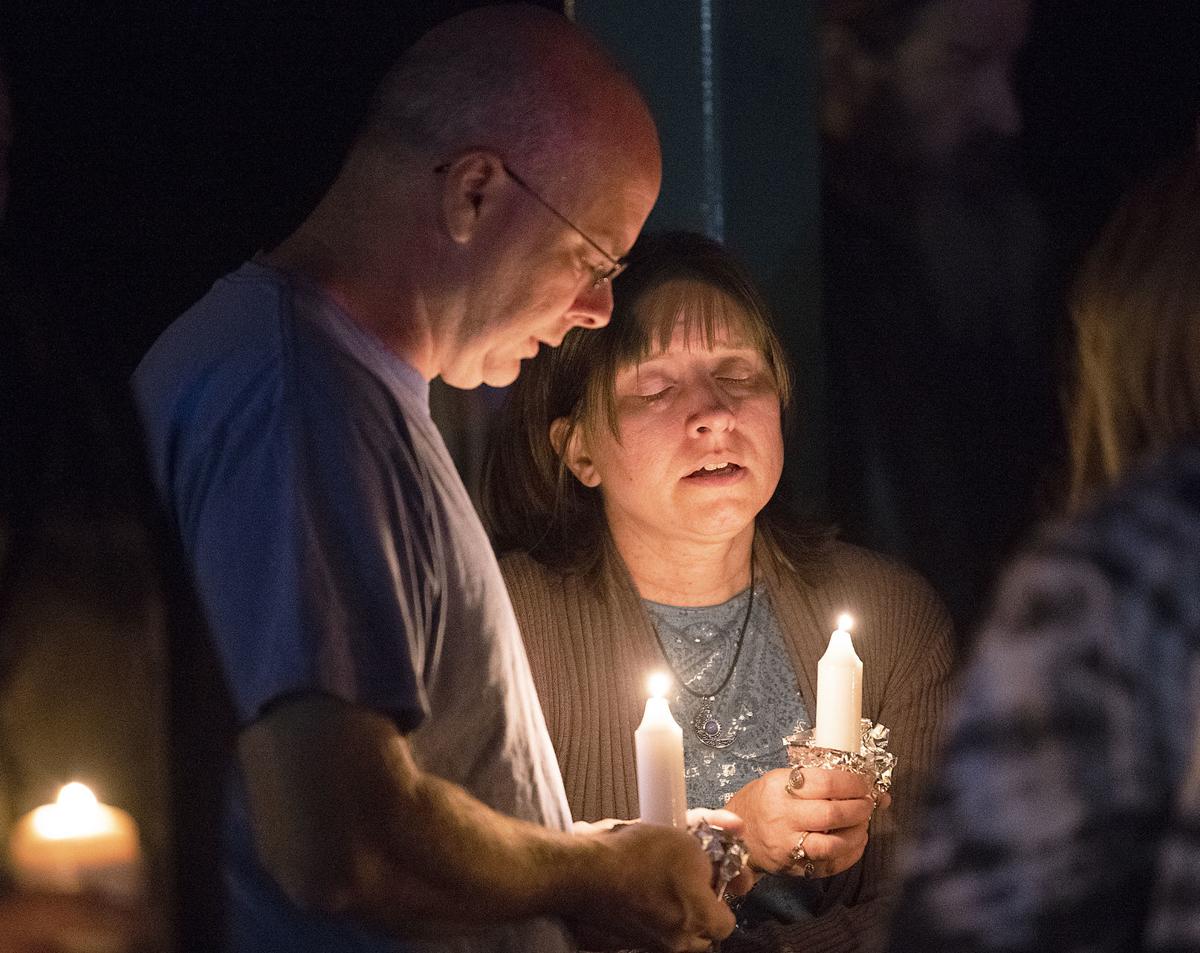 Shawn Weed and his wife, Leigh, join dozens of relatives and friends at a candlelight vigil in memory of Shawn’s brother, John Weed, on Friday night at Watkins Park in Mount Airy. 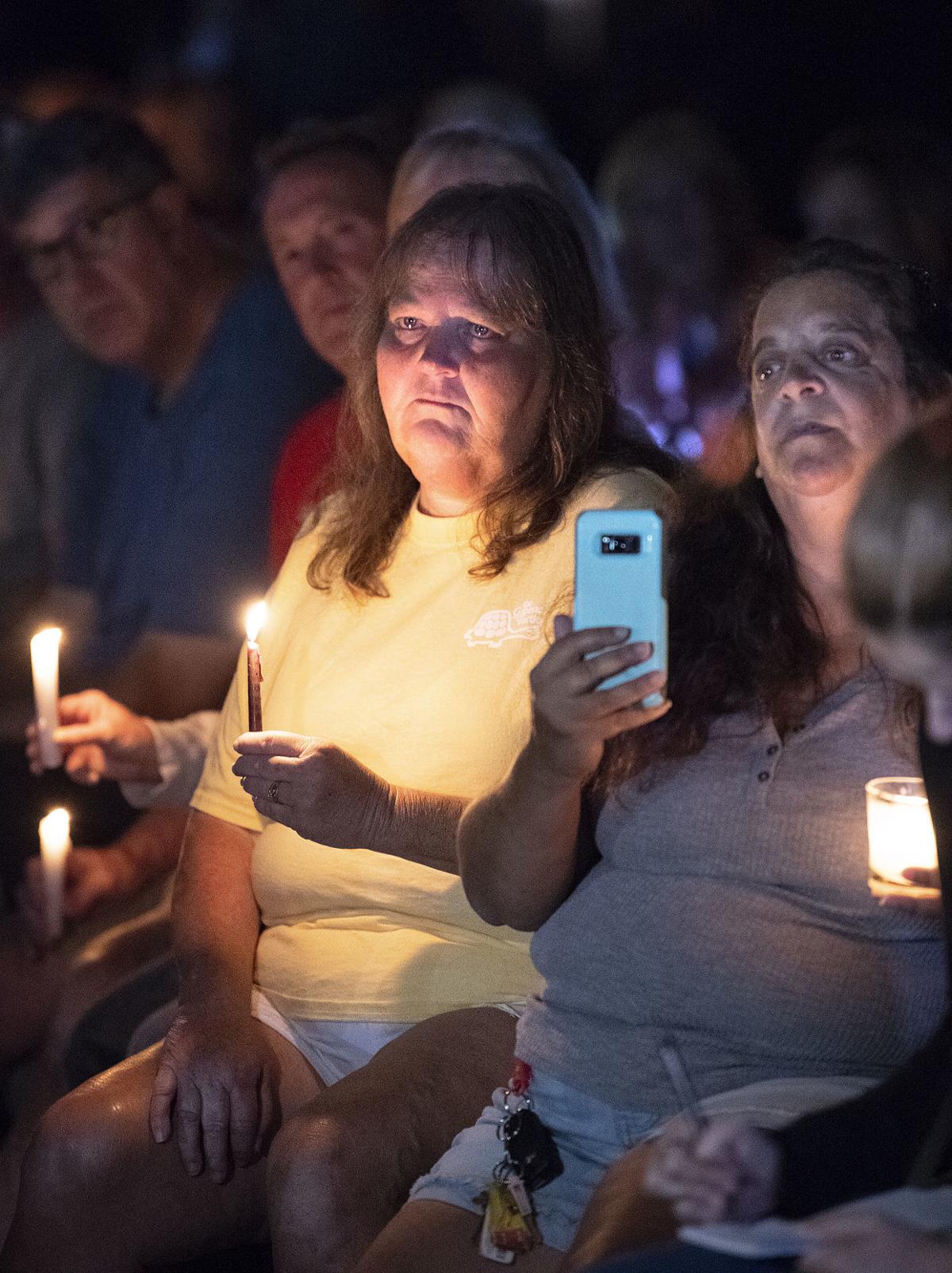 A candlelight vigil was held for John Weed on Friday night at Watkins Park in Mount Airy. 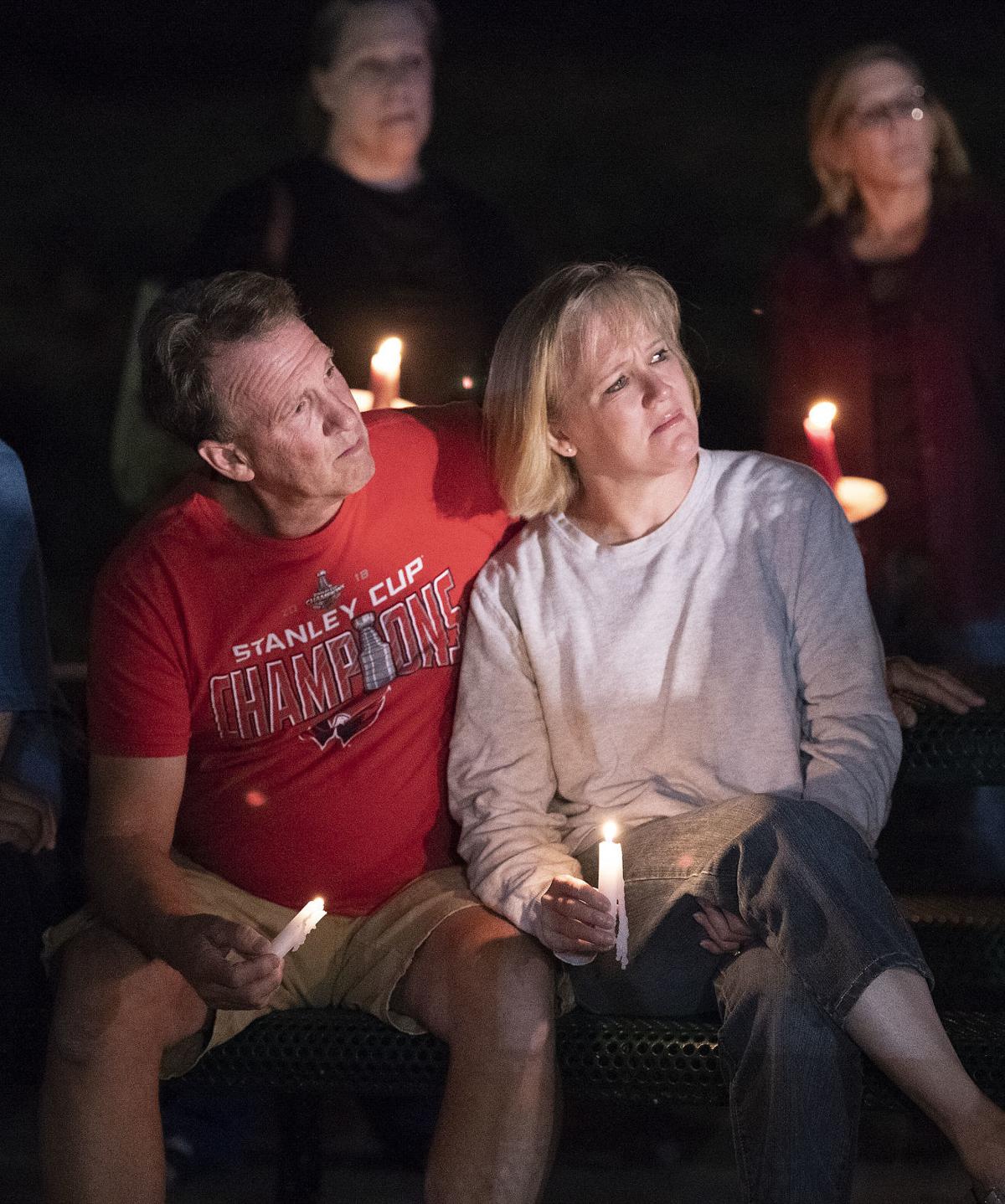 Shawn Weed and his wife, Leigh, join dozens of relatives and friends at a candlelight vigil in memory of Shawn’s brother, John Weed, on Friday night at Watkins Park in Mount Airy.

A candlelight vigil was held for John Weed on Friday night at Watkins Park in Mount Airy.

Weed, who died a day after he was assaulted by two teens at The Great Frederick Fair on the evening of Sept. 20, was remembered as a fun-loving, jovial handyman who at times made his living as a butcher and by refurbishing antique furniture. Shawn Weed, John’s adopted younger brother, said he would most miss his brother’s easygoing greetings and casual conversations, which John would usually begin with “Hey, buddy! How are you?” before proceeding to one of any number of topics from hunting to happy memories and fishing, another favorite pastime.

“He liked to go fishing. He’d go out on the Potomac and just sit there all night long, he’d sit there all night on the bank and catfish, and when he’d come home he’d make a gourmet catfish that was to die for,” Shawn said with a smile. “When I went by Lori’s a couple months ago I had bought a boat to go out on the bay, and he was so tickled pink that I’d bought a boat, he wanted to go crabbing and fishing, and I said, ‘Well, I’ve still got to get it licensed and I have to do this and I have to do that, but if I don’t get you out this year I will get you on it next year.’ But then this happened.”

The assault occurred sometime before 6 p.m. Friday when, according to the Frederick County Sheriff’s Office and county prosecutors, a 16-year-old boy approached Weed and asked him for a dollar. The teen then punched Weed in the back of the head, according to stories published previously in The Frederick News-Post. A conversation of some kind took place between two boys and Weed before the second boy, a 15-year-old, ran at Weed and threw a final punch about a minute later.

John Weed’s mother, Frances Weed, described her anguish in a statement read by Lengerhuis at Friday’s vigil, describing all the work and help her son had put forth to ensure that he and his parents had a good life together in Mount Airy, including remodeling the basement of their home, shopping for groceries, and helping his father with doctor’s visits and yardwork.

“He had so many plans to make our dream of living together in our senior years come true, and because of an unprovoked, violent act, this dream is now shattered,” Frances Weed’s statement read in part. “How does a mother say goodbye to her firstborn? How will we ever get along without him? I can’t think about it, but it’s all I think about. My heart is broken.”

Lengerhuis, who had known Weed since the mid-1980s, also offered the mic to anyone else in the crowd of about 100 who wanted to speak about John, getting several takers. Speakers ranged from longtime family friends, like Cindy Wirick, to friends from John’s days attending Einstein High School in Montgomery County.

Some speakers, like Robert Leveille, admitted they didn’t know John personally, but were motivated to come out after seeing the news coverage surrounding his death. Joined by a small group of motorcyclists from groups such as the Eagle Rides and the Freedom Riders, Leveille pledged to turn out Oct. 22 at the Frederick County Courthouse to support the Weed family at the next scheduled court appearance for the two boys charged in his death.

“There’s a lot of them here,” Leveille said, gesturing to the bikers standing near the back of the pavilion. “And I don’t think most of them know John, but we’re here to support the family, and I think it’s important that the community supports the family because it was definitely a terrible incident that happened.”

Reached for comment Friday, Sheriff Chuck Jenkins said that there were no updates in the case, explaining that the teens remained in custody without bail and detectives were still pursuing leads in the case and meeting with potential witnesses.

“I extended my condolences to the family because I really thought this was a horrendous, hateful crime,” Jenkins said.

The sheriff had previously stated in an appearance on FOX 5 D.C. that he hoped the case would be considered a hate crime. The teens are both black, and Weed was white.

Jenkins has since clarified his statement, indicating that he found the teens’ behavior hateful.

“I know it doesn’t meet the statute for a hate crime under the law, but I felt that, because of the way [the teens] desecrated [Weed] and spit on him, that to me demonstrated a deep hatred,” Jenkins said Friday.

While Frederick County State’s Attorney Charlie Smith said the teens could likely face manslaughter charges as the investigation continues, the case was proceeding at the pace of the detectives’ investigation as of Friday and the charges against both boys remained the same Friday as when they were arrested a week ago.

Smith indicated that while several witnesses have been interviewed, detectives were still hoping to hear from anyone else who may have witnessed or heard all or part of the altercation between the teens and Weed.

The sheriff’s office asks eyewitnesses to contact Detective Hyatt at 301-600-7114. Tips may also be provided to our tips line by calling 301-600-4131 or by emailing FCSOtips@frederickcountyMD.gov.

The sister of John Weed, the 59-year-old Mount Airy man who died Saturday after an assault at The Great Frederick Fair the night before, said …

This is an article meant to illustrate how the community grieves for the departed. It is completely appropriate to convey our condolences to the family of Mr. Weed & express how he will be missed. I am loath to tell anyone what to do, however, perhaps it would be best to refrain from venting venom. I’m sure you’ll have other opportunities.

My deepest sympathy to the family.