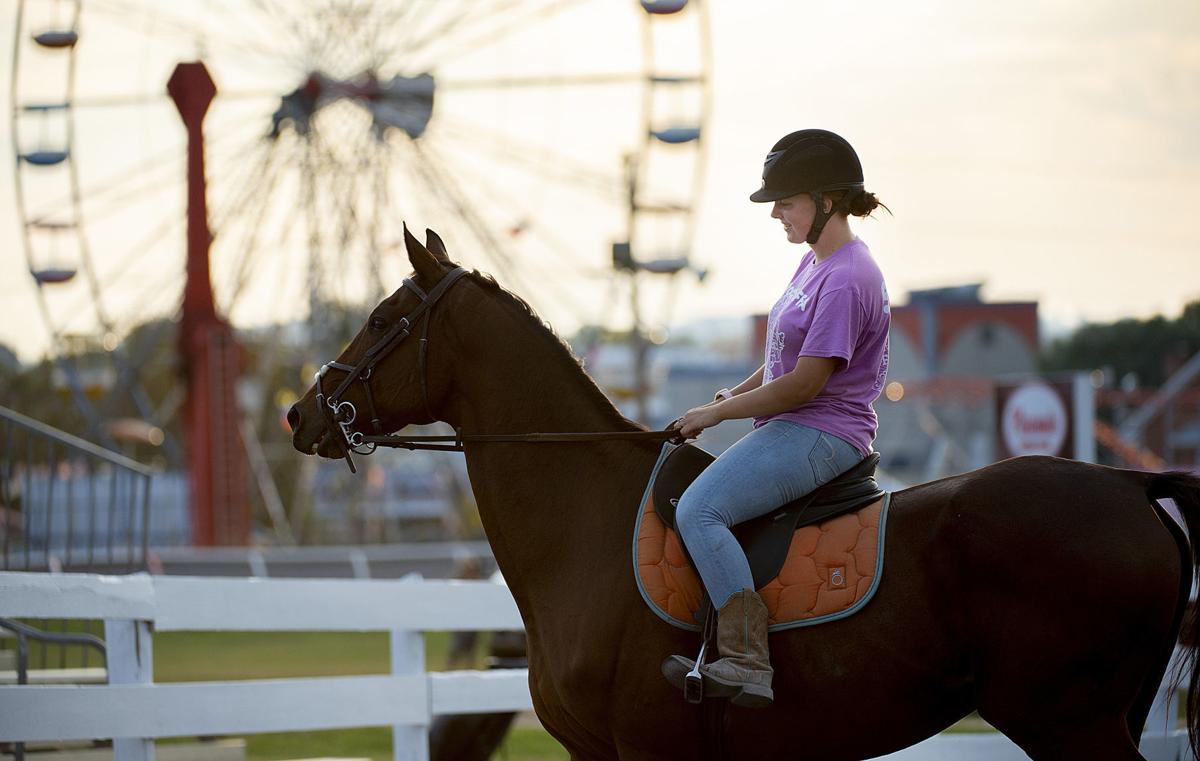 Sierra Weatherly and her horoughbred Sleigh Ride practice their skills in the show ring at the Great Frederick Fair Thursday night in preparation of competition Saturday. 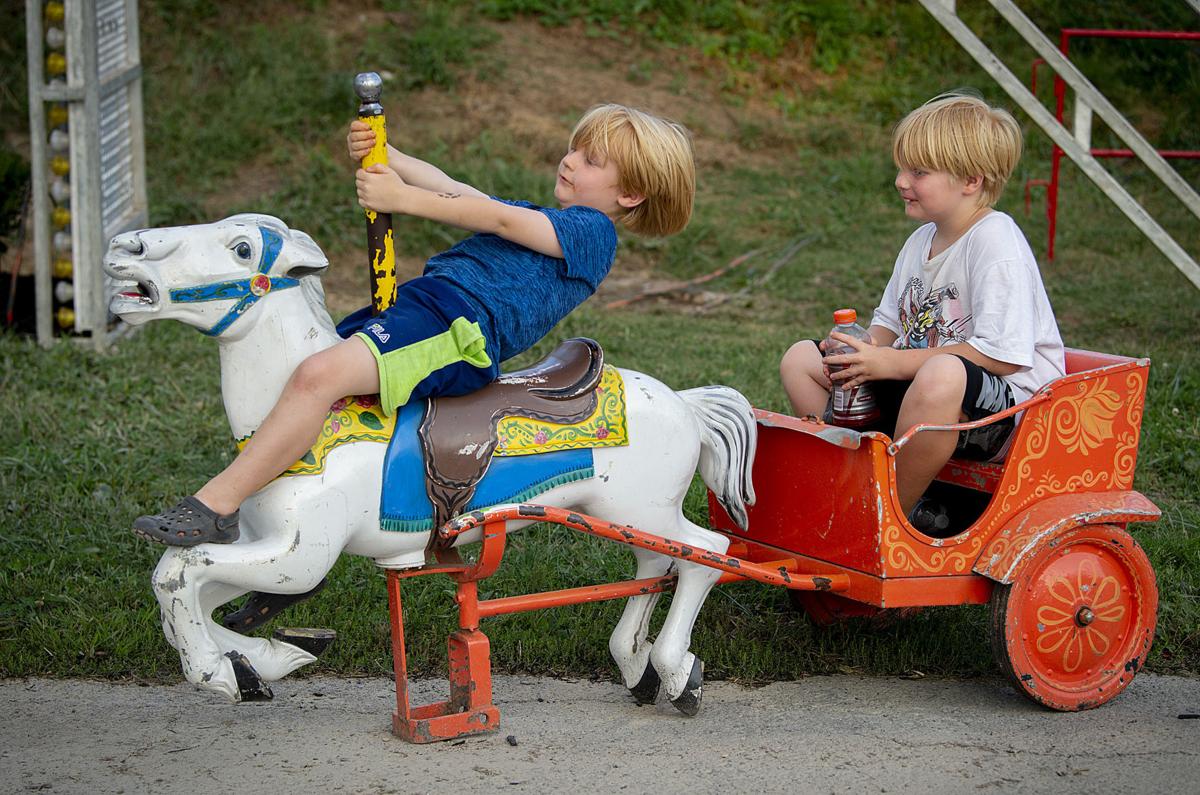 Raymond Davis, 5, and his brother Carter 7, play on a metal horse and wagon at the beginning of the midway at the Great Frederick Fair Thursday night. The family will be competing with three hogs through next week. 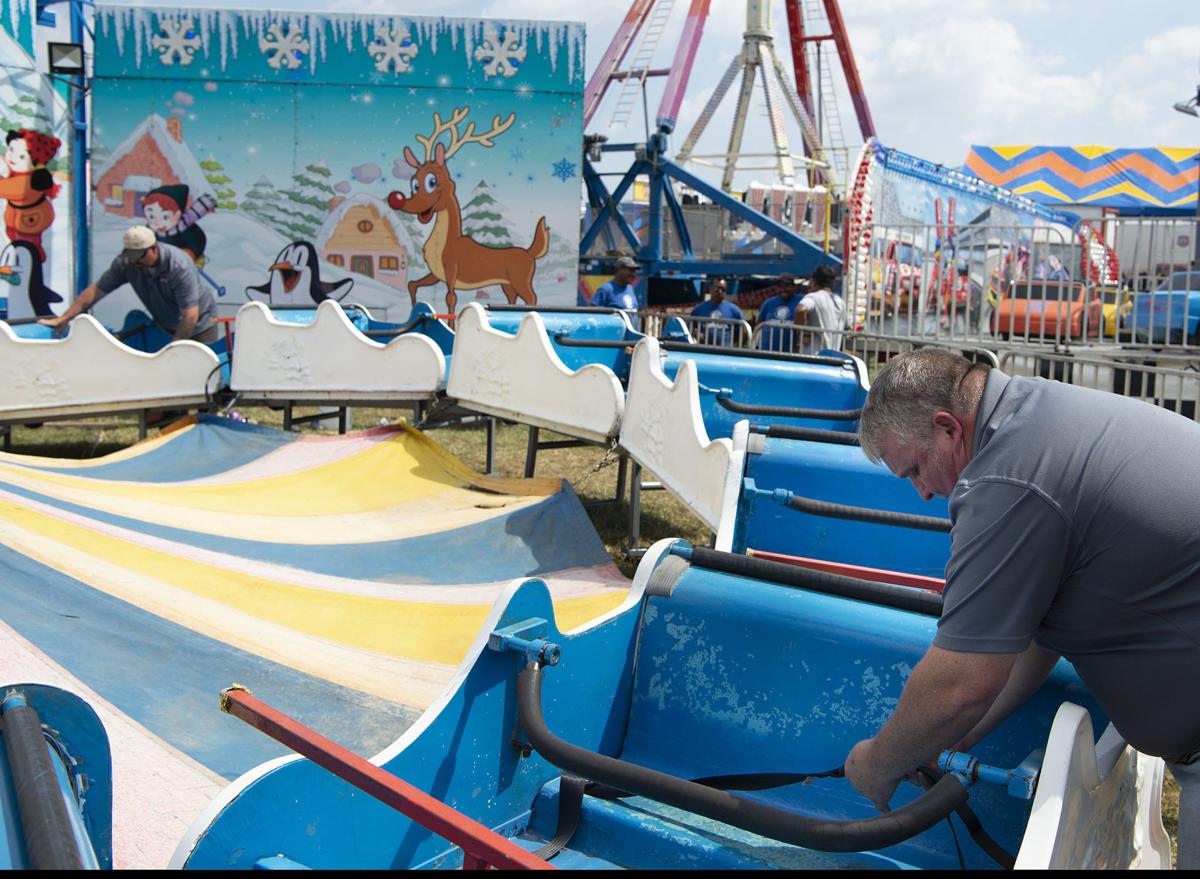 Sierra Weatherly and her horoughbred Sleigh Ride practice their skills in the show ring at the Great Frederick Fair Thursday night in preparation of competition Saturday.

Raymond Davis, 5, and his brother Carter 7, play on a metal horse and wagon at the beginning of the midway at the Great Frederick Fair Thursday night. The family will be competing with three hogs through next week.

Event organizers, state employees, vendors and contractors kept a brisk pace at the Frederick Fairgrounds on Thursday afternoon with less than a day to go before the beginning of the 157th Great Frederick Fair.

Out on the Midway, the fair’s main amusement ride vendor, Reithoffer Shows, had just about finished setting up all 40 rides and attractions that will be open to fairgoers this year.

Standing next to the Mini Himalaya, a ride that features cars on a circular rail, several members of the Maryland Department of Labor’s Safety Inspection Unit were waiting for a team of Reithoffer Shows employees to finish making a few adjustments to the attraction. State inspectors had flagged a set of wheels on the ride in a previous inspection earlier this week that needed to be replaced, meaning a final overview of the ride would be needed before it could be opened to the public.

“We’re ready. We’re just waiting on this one last ride to be inspected, but everything else is ready to go. The vendors are moving in, the carnival is set up, and once this last ride gets inspected, we’ll be ready to open the gates,” said Karen Nicklas, an executive assistant for the fair who stood with the inspection team.

The safety and well-being of fairgoers is a top priority for the fair’s board of directors, Nicklas said, and with that in mind, inspectors have been out since Monday working nonstop alongside Reithoffer Shows to ensure each and every ride was safe, down to the smallest detail.

Every time a ride is set up anywhere in the state, members of the Labor Department’s safety unit are required to give the attraction a thorough inspection, said Jim Harper, an amusement ride supervisor with the state’s inspection team.

“We start at the base, we check blocking, so where it’s sitting, to make sure that the area around it is safe, we look at the structure, depending on the type of ride we will look at the cars themselves, the seat belts and all the restraining devices,” Harper said, going over all aspects of the rides his team focuses on. “We check to make sure all the pins are in place, all the fasteners are in place, we look for cracks, pretty much we look over the entire ride.”

State inspectors identified a total of 57 safety violations on Reithoffer Shows’ rides in this year’s pre-fair inspections and wrote several safety orders, including one to replace some non-slip flooring on the Spider-Man ride and replacing or repairing a restraint bar on one of the Tornado ride’s carriers, according to state inspection records provided to The Frederick News-Post.

Almost every violation was corrected immediately after the first rounds of inspections Monday and Tuesday, and nearly every issue had been addressed by Thursday morning, Harper said.

“This is the last ride I have left, and I just have to watch it run,” Harper said, nodding toward the Mini Himalaya ride. After watching the ride for a few minutes, Harper gave it a thumbs-up.

While Harper and his team don’t have to ride every attraction as part of their inspections, his work with the Department of Labor’s amusement ride unit has included a lot of hands-on testing.

For example, if an event in the state features a go-kart track or something similar where event attendees are given control over the ride, Harper and his team are required to test every single kart and inspect the track before the attraction opens.

“The first two or three trips are a lot of fun, but then it gets old,” Harper said with a laugh. “But everything here at the Frederick fair is totally controlled by the ride operators, so there’s nothing that you can really check on these rides that you can’t check without riding them.”

That’s fortunate for Harper, who admitted that while he does enjoy most of the rides, there are some he can’t handle too well.

That said, Harper said he respects the preferences of other fairgoers and dedicates himself to carefully inspecting every attraction both before the fair and during the weeklong event. While state inspectors won’t be stationed at the fair full time, Harper said some members of the inspection team try to make it up once a day, usually in the morning, to do walk-through spot inspections.

Other precautions will also be in place to make sure everything goes off without a hitch, according to Nicklas. Both the Frederick County Sheriff’s Office and the Frederick County Division of Fire and Rescue Services will be present at the fair as in previous years, along with a local private security company.

The fair had an ongoing contract with All County Security Agency Inc., a private security firm based in Ellicott City, to help bolster the sheriff’s office’s presence in recent years, but this year the contract went to a new firm, Frederick-based Deanovich & Associates Inc., Nicklas said.

“We bid it out every year and have evaluations by different companies who give us insights and suggestions on ways to improve the fairgrounds security and we just felt this was a good move to make,” Nicklas said of the new contract.

Knowing that all the rides were inspected and security measures were in place, Nicklas said she was eagerly awaiting opening day.

“I love the Frederick fair because it’s tradition and community-oriented. There’s so many people who come every year because it’s part of their family’s tradition, and it’s been part of my family’s tradition forever,” Nicklas said. “I just enjoy the camaraderie of the events and all of the exhibitors coming in and competing and sharing their best of the best livestock or plants or photos. It’s just an overall fun event for Frederick.”

The Great Frederick Fair begins Friday at 9 a.m. with two closed judging events. The venue opens to the public at 4 p.m., followed by a horse pull at 5 p.m.

The Midway carnival rides also open to the public at 5 p.m. Friday.

Friday admission to the fair costs $5 from 4 p.m. to 10 p.m. for adults and children 11 and older. Children 10 and younger are admitted free.

Daily admission increases to $8 from Saturday through the end of the fair Sept. 21.

For a full preview of The Great Frederick Fair and a complete line up of events and activities, visit the fair's website: www.thegreatfrederickfair.com.

The Maryland Department of Labor provided the following tips for Marylanders to follow while enjoying amusement park rides and similar attractions:

The department also had the following tips for parents and guardians of young children:

Fifty-seven violations? The few mentioned in the article should have been obvious to any observer. Looks like Reithoffer's Shows is derelict in its duty of due diligence to inspect its own rides and correct violations, and has delegated all responsibility to the state. The only deficiencies that get corrected are the ones the state finds. That way if anyone is killed on their ride, they can point to the inspector's signature and say, "See? We met all state requirements and our ride was accepted. Therefore we are not responsible for any mishap and your lawyers should contact the State Department of Labor." Such is the way of for-profit businesses.