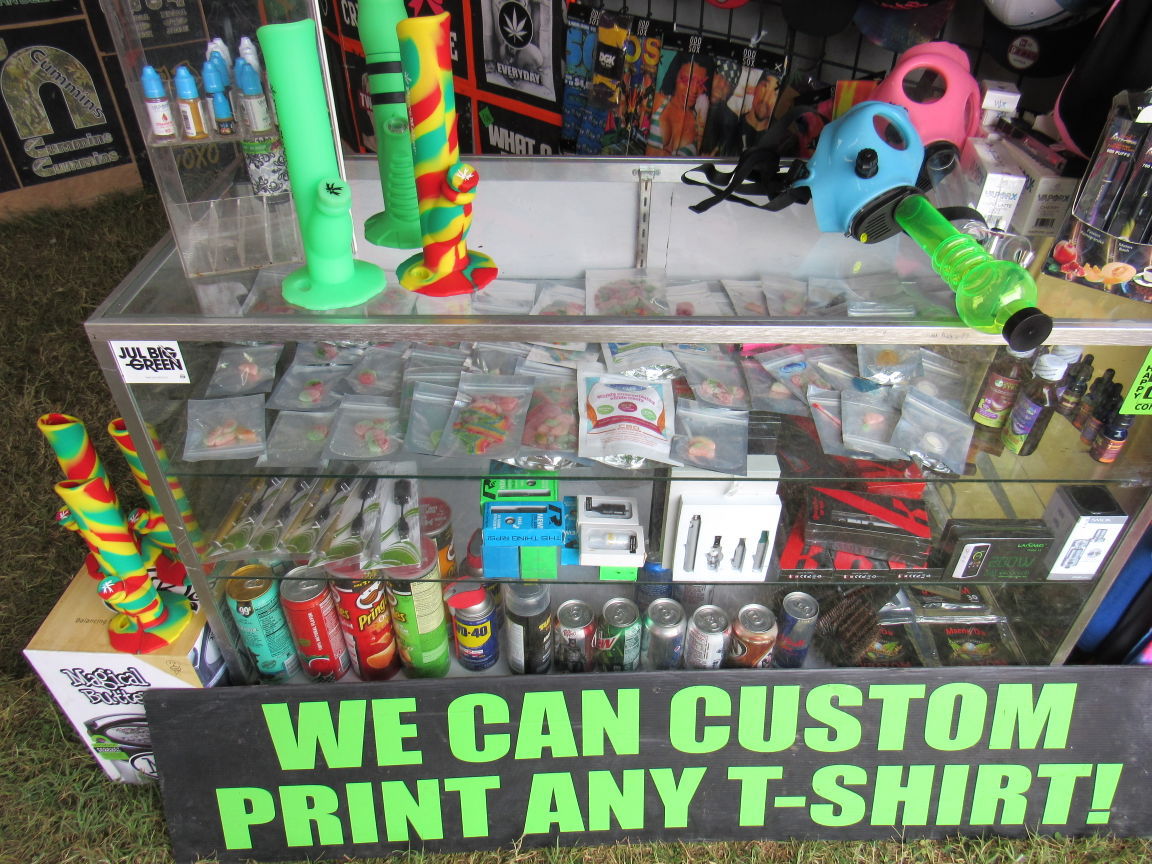 Sheriff’s deputies seized 50 to 70 bags of candy and other edibles suspected of being laced with THC. 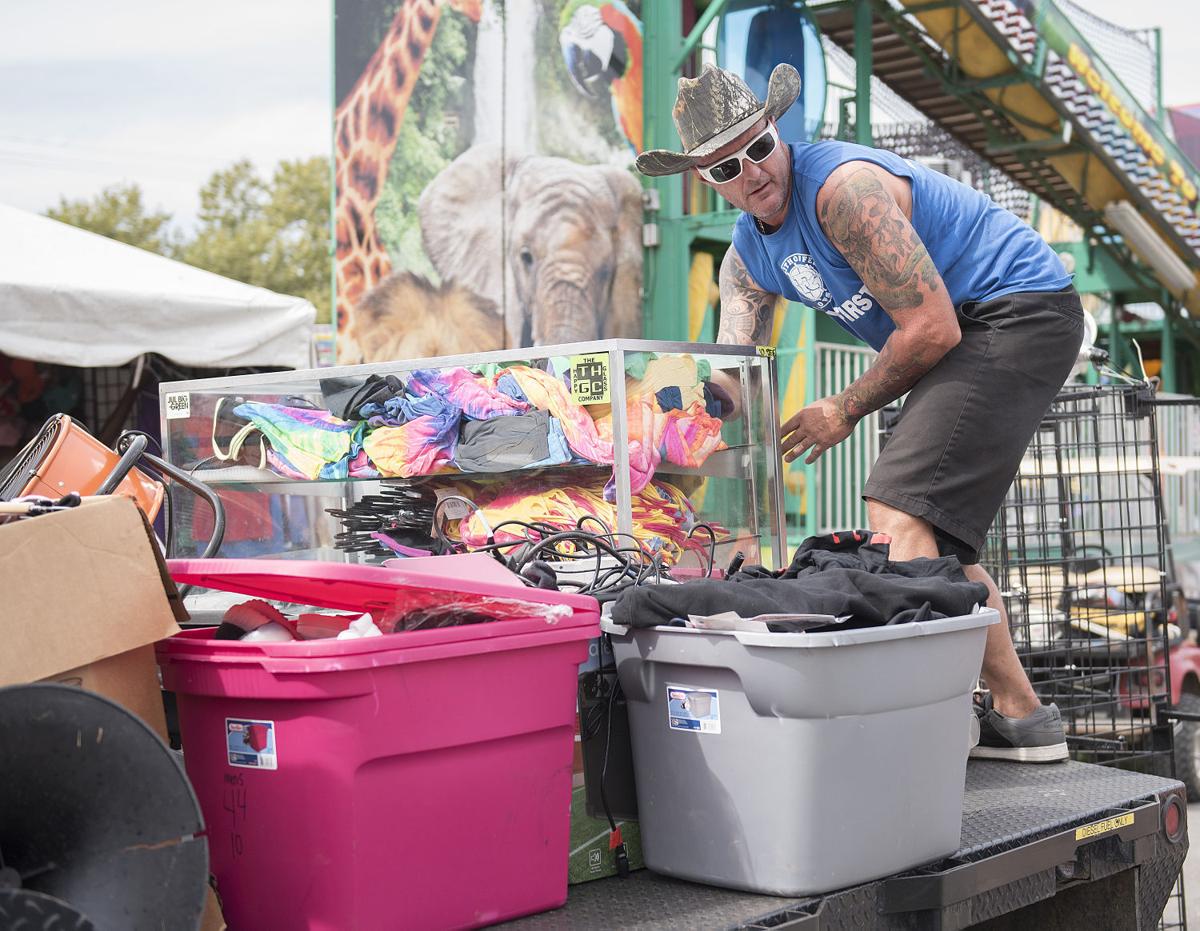 A worker loads on a truck the contents of a vendor’s tent Wednesday morning on the midway at The Great Frederick Fair after fair organizers and Reithoffer Shows decided to evict the vendor after police raided the tent Tuesday. Candy and other seized items were suspected of containing illegal drugs.

Sheriff’s deputies seized 50 to 70 bags of candy and other edibles suspected of being laced with THC.

A worker loads on a truck the contents of a vendor’s tent Wednesday morning on the midway at The Great Frederick Fair after fair organizers and Reithoffer Shows decided to evict the vendor after police raided the tent Tuesday. Candy and other seized items were suspected of containing illegal drugs.

A vendor accused of selling THC-laced gummy treats and other edibles was removed from the grounds of The Great Frederick Fair earlier Wednesday, according to fair organizers.

The fair board and directors met early Wednesday and quickly decided to request the immediate removal of the vendor in question and all of its products and staff from the fairgrounds, said Joe Devilbiss, president of The Great Frederick Fair and the Frederick County Ag Society. The board then contacted Reithoffer Shows Inc., a Florida-based company that rents the carnival area of the fairgrounds.

By 10:30 a.m., Reithoffer and fair volunteers had removed the tent in question from the fairgrounds, Devilbiss said.

Deputies were tipped off regarding the vendor up to 72 hours before they raided the tent. Several items seized from the tent tested positive for THC, the primary psychoactive component in marijuana, Deater said. The bulk of the edibles seized from the tent were sent for further testing to the Maryland State Police Crime Lab in Pikesville, the sergeant said.

Investigators believe Tuesday’s raid was an isolated incident, with Deater explaining that the tent in question was privately owned and the owner was among the two men and a woman who were at the tent when deputies arrived to serve a search warrant at 4:30 p.m. Tuesday.

“They were detained while the search warrant was executed, they were cooperative, and once we were done with our investigation we released them,” Deater said.

No criminal charges had been filed in the case as of Wednesday afternoon, but the investigation remained open pending the results of further testing of the evidence seized from the tent, Deater said.

Employees at the tent were charging from $30 to $200 for different-sized packages of the edibles in question, Deater said.

A representative of Reithoffer Shows was not immediately available for comment Wednesday afternoon.

So what if the tests come back negative? Will the FCSO pay the vendor for their lost revenue?

Why would anyone fell that The Fair were "fair game" to have allegedly done
such a vile thing?

Haven`t been to the fair yet but did Jan Garner and her flunkies set up a DemoBrat stand in place of the Republican stand [beam]. Ya! that`s right Jan!! know all about your gummy bear treats in you public office desk [wink]

They never should have been selling bongs and other drug related things. Bad taste at a family venue. The folks running the fair need to get a handle on that before next year.

Obviously I meant "related" not "relarted" (that just sounds bad)

I sat on the bench beside this booth resting my feet on Tuesday afternoon while the rest of my party was off looking for a particular French fry booth. I spoke with the guy wearing the cowboy boots in the picture about how difficult it is to ride the hover boards they were selling. He was very nice and polite. Sorry to see the booth was involved in such activity.

If several items sized from the tent tested positive for drugs as the article states, then why were these vendors not arrested? Am I missing something here?

Because they didn't actually test positive for anything illegal

Hit enter too soon, I was going to say based on the timeline working backwards from Tuesday - 72 hours someone reported this pretty early on, probably in the first hour they were open!

I wonder where our bearded friend (he was on the right on the bench in the "America F' Yeah" photo yesterday and was was quite the talker on Saturday) is now.

BTW, when I went on Saturday there were many people walking around with "Trump?Pence" signs. I saw one person with a "Hillary" sign. The Democratic tent had closed at 7, they left 3 signs out for anyone to take. When I left at 10 they were still there.

They don't call it Fredneck for nothing. Luckily, Maryland is reliably blue. Go Hillary!

You live here why? You should tell that to O'Malley's Lt. Gov. You know, the guy who got routed by Hogan.[wink]

A bad Democrat choice, no doubt, we all knew that, but Hogan will be lucky to be re elected and he knows that.

Unless Hogan "shoots a man in Reno just to watch him die" (sorry for showing my eclectic knowledge threecents, I know its intimidating to you[beam]) there is no way our good Gov is not getting re-elected Dick. His approvals are through the roof.

So Danielle E. Gaines lied in her article? Or maybe the Democratic rep lied? Because you saw it. Anecdotal evidence from des that no one wants HRC signs.

Just telling you what I saw B1.

Was her reporting about Saturday? Were her observations not anecdotal?

I guess bongs, pot t-shirts and f'ing right shirts have no place at the Fred Co Fair. As I took around my 4 and 6 year old I can't say I will miss them.

ok, now some of my questions got answered. Fairs and carnivals are family functions. There does not need to be anything promoting the use of pot, drugs, and alcohol

Point taken but illegal is still illegal and to display their wares with such disregard for the law in a place where many kids are wandering through with parents... "Oooh daddy, that's pretty! What is it?"

Jury still out on "illegal". Will newspost post follow up. Eating certain poppy seeds on bread will test positive for narcotics.

That made me wonder, they were brazen.

For BSmarten:
http://www.usada.org/can-poppyseeds-cause-a-positive-drug-test/
How well the poppy seeds are cleaned and processed will determine how much morphine residue is on the seeds, and this varies depending on which country the seeds are from as well as how and when they were harvested. However, it is known that morphine and codeine can sometimes be detected in the urine up to 48 hours after ingestion of poppy seed from some pastries such as bagels, muffins, and cakes