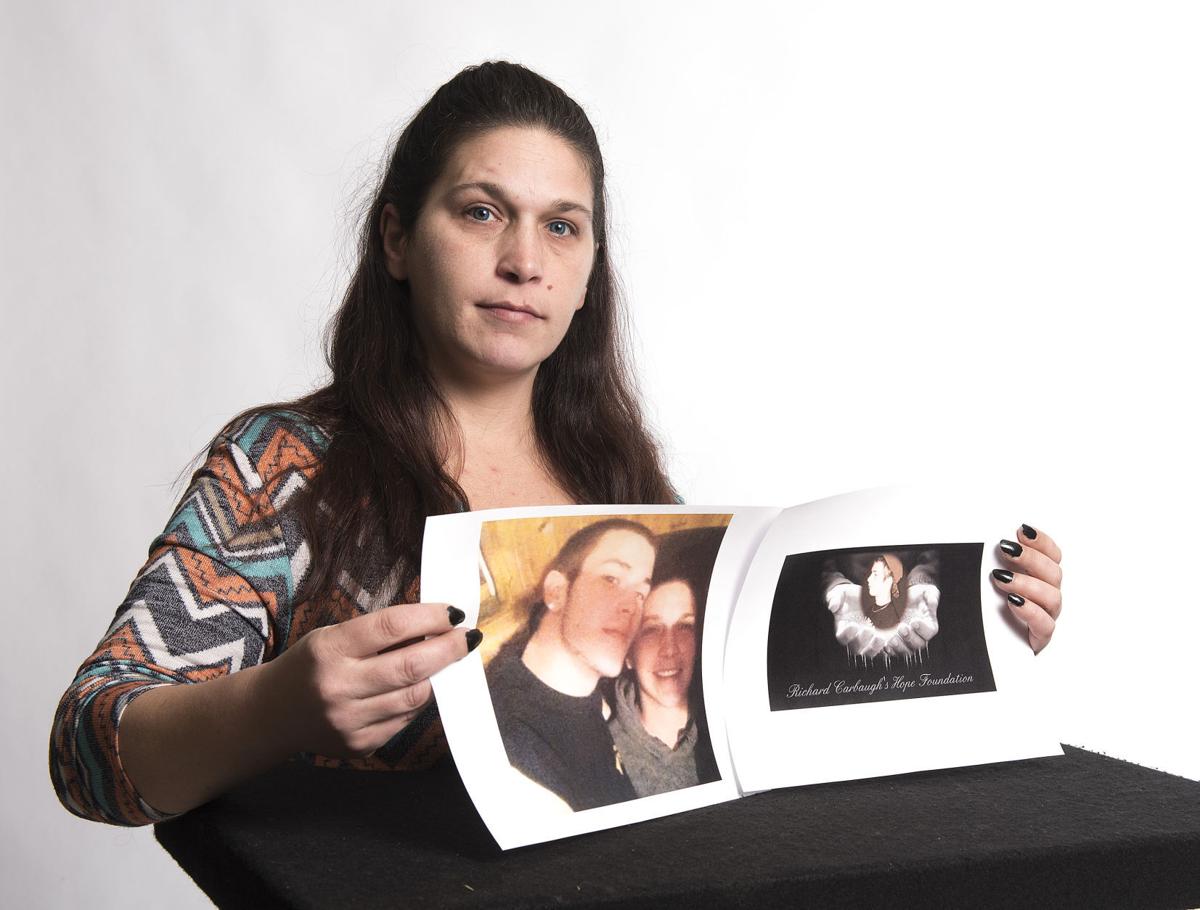 Gina Pezza-Carbaugh holds a photograph of her and her son, Richard, who died of an accidental overdose. She recently approached the town of Thurmont about placing heroin awareness signs in the community. 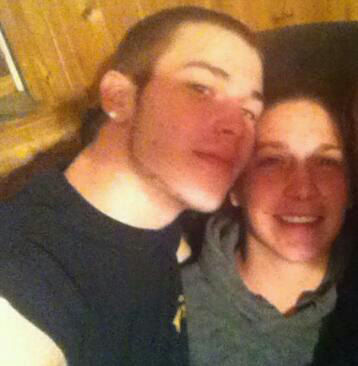 Gina Pezza-Carbaugh and her son, Richard, who died in 2012 from an accidental overdose after being clean for eight months. He became addicted at age 14 while at Catoctin High School.

Gina Pezza-Carbaugh holds a photograph of her and her son, Richard, who died of an accidental overdose. She recently approached the town of Thurmont about placing heroin awareness signs in the community.

Gina Pezza-Carbaugh and her son, Richard, who died in 2012 from an accidental overdose after being clean for eight months. He became addicted at age 14 while at Catoctin High School.

Heroin crept silently into her home and killed her son. Now, a mother wants roadside signs to be the community’s daily reminder of the drug’s destructive toll in Frederick County.

The signs would list the number of area heroin overdoses, including deaths, for the prior year.

Gina Pezza-Carbaugh’s son, Richard Carbaugh, had a fatal overdose in 2012 while recovering from a heroin addiction. Richard had been clean for eight months for the first time since he was 14.

The symptoms didn’t align until she researched addiction. Richard was aggressive, hid things, wore long sleeves even in warm weather and pushed away lifelong friends.

Vivid in her memory is a day with Richard in the adolescent wing of Project 103, the adult substance abuse service run by the Frederick County Health Department, where he told a counselor nothing was going to stop him from using.

An arrest, four months of treatment and a group therapy sponsor offered a glimmer of a light at the end of the tunnel for Richard after four years of using. On Dec. 4, 2012, Richard asked her, “Can you help me help others?,” Pezza-Carbaugh remembers.

Yes, she could handle that while he focused on his sobriety, Pezza-Carbaugh said. The next morning, he died.

“It does start at home, but it’s not the parent’s fault,” Pezza-Carbaugh said.

The foundation and a group called Maryland Heroin Awareness Advocates are working to place heroin awareness signs throughout Frederick County. The signs would be similar to one installed in Harford County a year ago with a running tally of heroin overdoses and lives lost.

Pezza-Carbaugh, who now lives in Frederick, approached the Thurmont Board of Commissioners on Tuesday to find a location for a heroin awareness sign. Richard attended Thurmont schools and started using heroin while in Thurmont Middle School, according to his mother.

While some commissioners initially supported the idea, a cloud of concerns, questions and regulations have complicated the path forward.

“I’m struggling with this,” said Commissioner Bill Buehrer, a licensed funeral director. “When I first got the email, I responded to my fellow commissioners [that] I was 1,000 percent in support. And, then I had time to think about it.”

Buehrer said he would prefer that a phone number or a place where people can get help be part of the sign.

Margaret Nusbaum, a special administrative director for the Frederick County executive’s office, is coordinating putting a heroin awareness sign somewhere else in Frederick County. The sign’s location will be announced in coming months, she said.

Mayor John Kinnaird said at Tuesday’s town meeting that, for the Thurmont sign, he would object to any statistics other than ones specific to Thurmont.

“I can imagine a sign, just like a ‘Welcome to Thurmont’ sign and as you’re coming in or leaving, [it] says, ‘So you think it can’t happen to to you’ and then you list those numbers,” Commissioner Martin Burns said. “And people start talking.”

Pezza-Carbaugh originally envisioned a sign off U.S. 15 before Criswell Chevrolet of Thurmont. The State Highway Administration told her Thursday that the grassy area near the highway exit is only for directional signs, she said.

Thurmont’s sign ordinance and private property along main roads limit where the sign can go. Billboards are banned in Thurmont.

“It would be a stretch for me to bend a regulation based on drug use ...,” Kinnaird said. “And I think we would set ourselves up for having to explain why we’re not going to change other regulations.”

Burns argued that this was an example of when the government needed to step aside and the Board of Appeals should grant a special exception to protect the health, safety and welfare of the public.

“We’ve seen statistics where our kids are going to Baltimore and bringing the drugs back,” Burns said. “Some of them have died outside the municipality. This is an epidemic. I think awareness is all we’re doing here.”

Pezza-Carbaugh said Richard died from drinking a “hot shot,” a mix of heroin and poison, that was mixed unknowingly into his drink. Some people he was with threw him from a car on Interstate 70, then later retrieved him and took him to his apartment, where he died of asphyxiation.

Since his death, Pezza-Carbaugh has repeatedly pushed against people’s reluctance to discuss addiction and against schools claiming there is not a drug problem among adolescents, she said. She is waiting on a response from the Frederick County Board of Education to place signs on its property.

Kinnaird was reluctant to have Pezza-Carbaugh go to the Board of Appeals for a special exception. Instead, he suggested she consider a temporary A-frame sign and offered to waive the initial application fee.

The sign would need to be taken in each evening and couldn’t remain in a single location for more than a week. The owner of the area’s Roy Rogers, who attended Tuesday, offered to host the sign first.

Kinnaird offered to host the sign second. Eyler said the Thurmont Police Department could have the sign third.

Kinnaird said it is feasible to find 52 businesses or private residences in Thurmont willing to host the sign each week over the course of 2017.

Parents and elected officials in Thurmont are teaming up to figure out how to save lives.

This is absurd! Young kids/adults are dying weekly in Thurmont from this horrible disease. We ALL need to educate ourselves and children! A sign is a true measure of what this drug is doing in our community. I lost my son less than a month ago from this horrific disease. He died in Montgomery County, but is a resident of Thurmont - per the Mayor he is not being included because he didn't die here.....but who came to inform me? yeah, the TPD not MCPD!! He got his drugs from Thurmont! I am guessing that none of the commissioners including the Mayor has ever had to deal with this within their families? I doubt it! This is only for awareness. How can we stop another child from dying or a parent having to deal with this debilitating disease? Commissioners, ask yourself this.....what if your child died or overdosed. How would you feel? I can tell you I feel powerless and hopeless! Unless we get more support and STOP this STIGMA the death rate is only going to increase. How Sad! It's time for Thurmont to wake up! Parents need to stick together. This is the only way to save our children! Good job Gina - don't give up. We are in this together!

What a bunch of balony!! Kids are dying and these people are arguing over a sign?! I would think any awareness efforts would be fully supported especially in Thurmont where herion is rampant among the community. Shame on these commissioners.