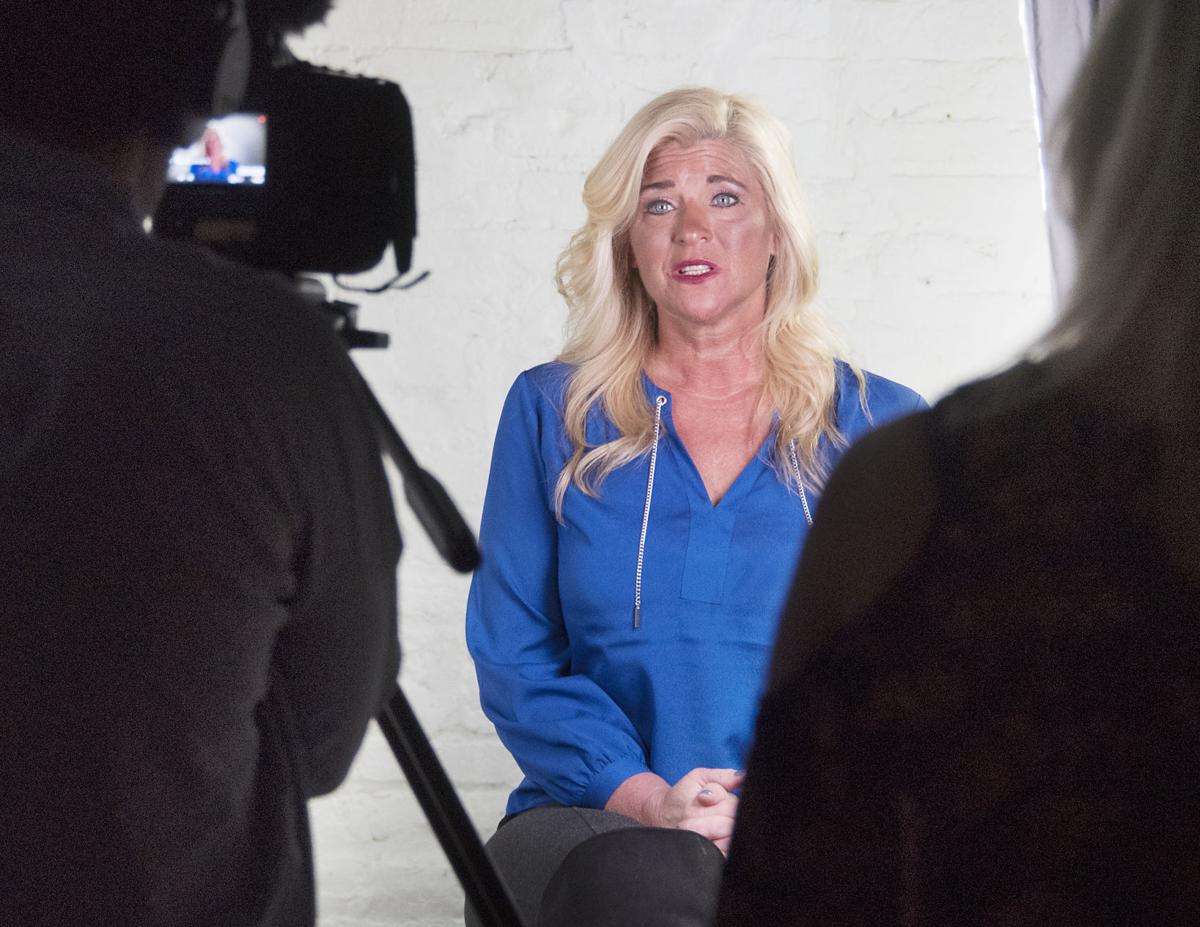 Recovering drug addict Pam Knight was addicted to prescription painkillers. In January, at Area 31 Cinema Studios in downtown Frederick, she taped her part for a video about the opioid epidemic in Frederick County. 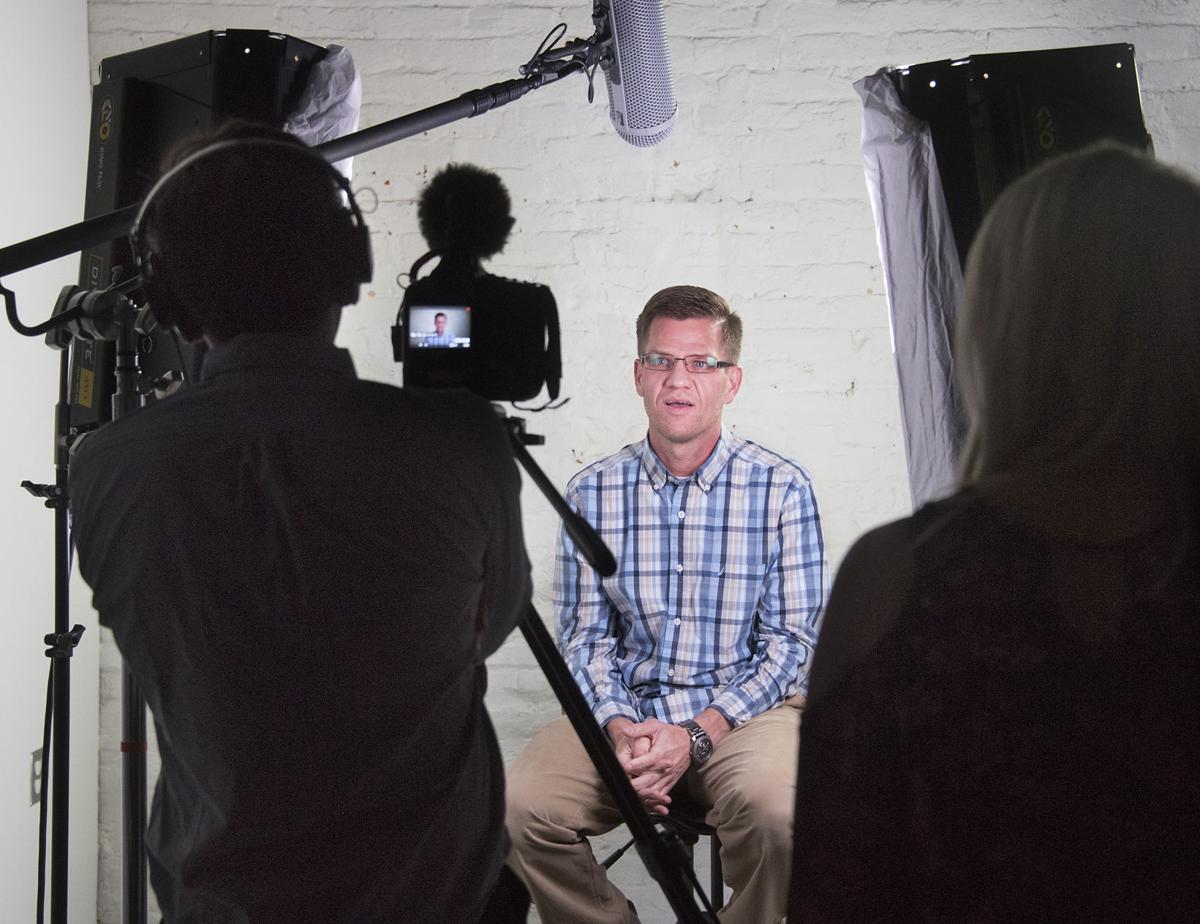 Former drug addict Korey Shorb, of Emmitsburg, tapes his part in a video on the heroin epidemic in Frederick County. Filming was in January at Area 31 Cinema Studios in downtown Frederick.

Recovering drug addict Pam Knight was addicted to prescription painkillers. In January, at Area 31 Cinema Studios in downtown Frederick, she taped her part for a video about the opioid epidemic in Frederick County.

Former drug addict Korey Shorb, of Emmitsburg, tapes his part in a video on the heroin epidemic in Frederick County. Filming was in January at Area 31 Cinema Studios in downtown Frederick.

Framed by a blank white wall, nine Frederick County residents went on camera to divulge some of their darkest memories of addiction.

The filming, held Wednesday evening at Area 31 in downtown Frederick, was for a new video on recovery awareness. Titled “I Am the Face of Addiction,” the film is intended to showcase positive recovery narratives for other residents struggling with substance abuse.

“We just want to break the stigma of the term ‘drug addict,’” said Pam Knight, the Libertytown resident who dreamt up and coordinated the film. “This is a major epidemic, but there are still so many people who are too ashamed or too embarrassed to admit ‘my life is out of control.’”

Knight, an impeccably coiffed 52-year-old with carefully layered makeup, has her own history with addiction.

For years, beneath the polished exterior, Knight was hiding a pill addiction that she described as “purgatory.”

“Towards the end, there was no high anymore,” Knight said. “You have to have it to make your brain feel normal. The first thing I would do in the morning is pop my pills.”

Knight said she first started taking pills in 2011 or so, after falling off a set of bleachers at her son’s high school football game. At first, she was prescribed Vicodin for pain management. The pills made her feel “like Superwoman,” she said. She began taking more and more.

It didn’t take long before Knight experimented with Percocet, and began doctor-shopping to acquire new prescriptions. In the last two years of her addiction, she said, she was buying pills off the street.

Her drug of choice was Roxicodone — known as “Roxys” on the street — an opioid-based painkiller. She would buy bags of 30-milligram tablets and take multiple doses at a time.

“I called them ‘blue devils,’” Knight said. “If I didn’t have them, I would get horrible shakes.”

Her husband and her oldest daughter, Loren Maxwell, said Knight’s gradual pitch into addiction was easy to brush off, at first. Daniel would notice days when she seemed especially manic or sweaty, but Pam always had a ready explanation. Maxwell said her mother’s ability to function in day-to-day life made her addiction harder to spot.

“I knew she liked to take pills, but early on, I just thought it was recreational,” Maxwell said. “I didn’t even see the signs until my uncle called and told me.”

“It’s funny, because I think symptoms can be easy to redirect or excuse away to avoid the ugly truth,” Daniel Knight said. “But since she’s gone through recovery, I see them everywhere.”

Knight’s youngest son, Connor, was also struggling with addiction at the same time as his mother. Like Pam Knight, Connor said his problems started with the opioid painkillers prescribed for his football injuries. But when he was 17, he first snorted heroin with a bandmate, and quickly became more addicted from there.

“It’s like, you don’t even know what happened,” Connor said. “We went from maybe smoking a little pot during band practice to the point where we couldn’t even play without heroin.”

After years of struggle, both Pam and Connor went through rehabilitation at treatment centers in Florida. Pam has been sober for three years; Connor for 11 months.

Pam said that recovery was the hardest thing she’s accomplished.

“If someone told me I was going to die from withdrawal, I would have believed it,” she said. “The pain was so bad, I wanted to jump out of my skin.”

Despite her experience, Pam Knight’s motivation for filming the video was to show other addicts that recovery is possible. She hopes to screen the final product in Frederick County Public Schools, where she speaks as an advocate for addiction recovery.

Other participants in the film also hoped that their involvement would inspire recovering addicts. Korey Shorb, a recovering heroin addict who grew up in Emmitsburg, said his ultimate goal is to end the stigma surrounding substance abuse.

“It’s the stigma that prevents people from seeking help,” Shorb said. “And when it comes to helping people, I don’t usually say no, because I know what it’s like to be down and out.”

Pam Knight, an addiction recovery advocate from Libertytown, called 211 Maryland twice in 2017 to find help for residents going through a subs…