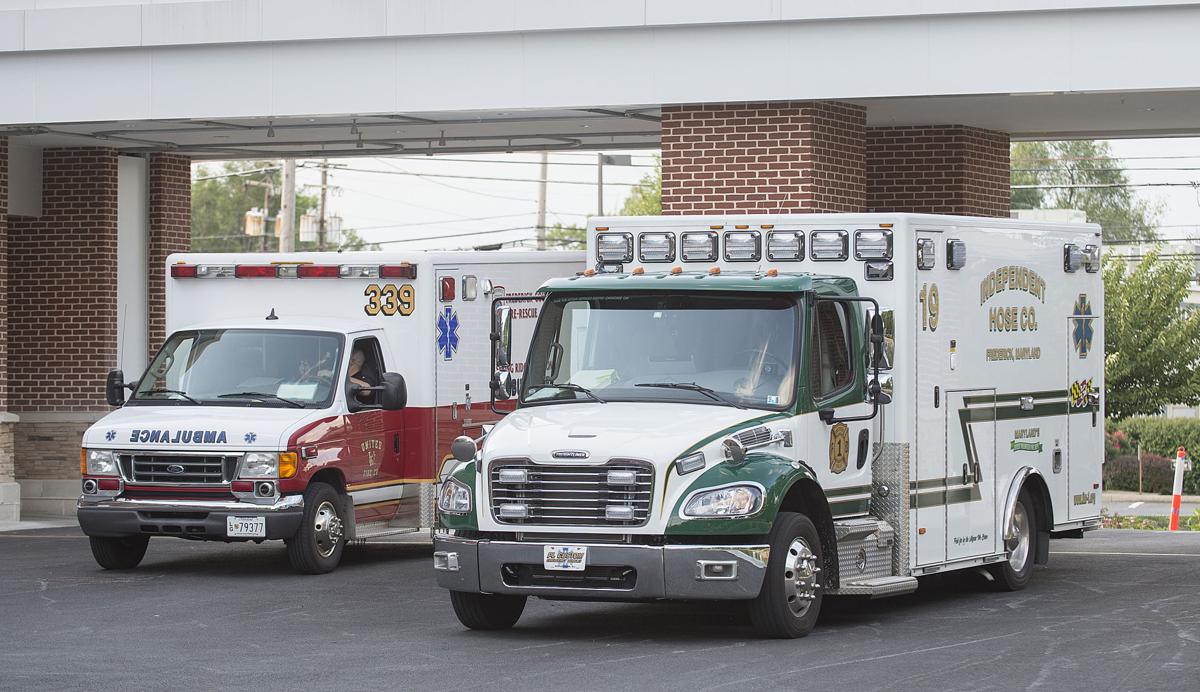 The Emergency Department at Frederick Memorial Hospital has seen an increase in opioid-related visits this year. 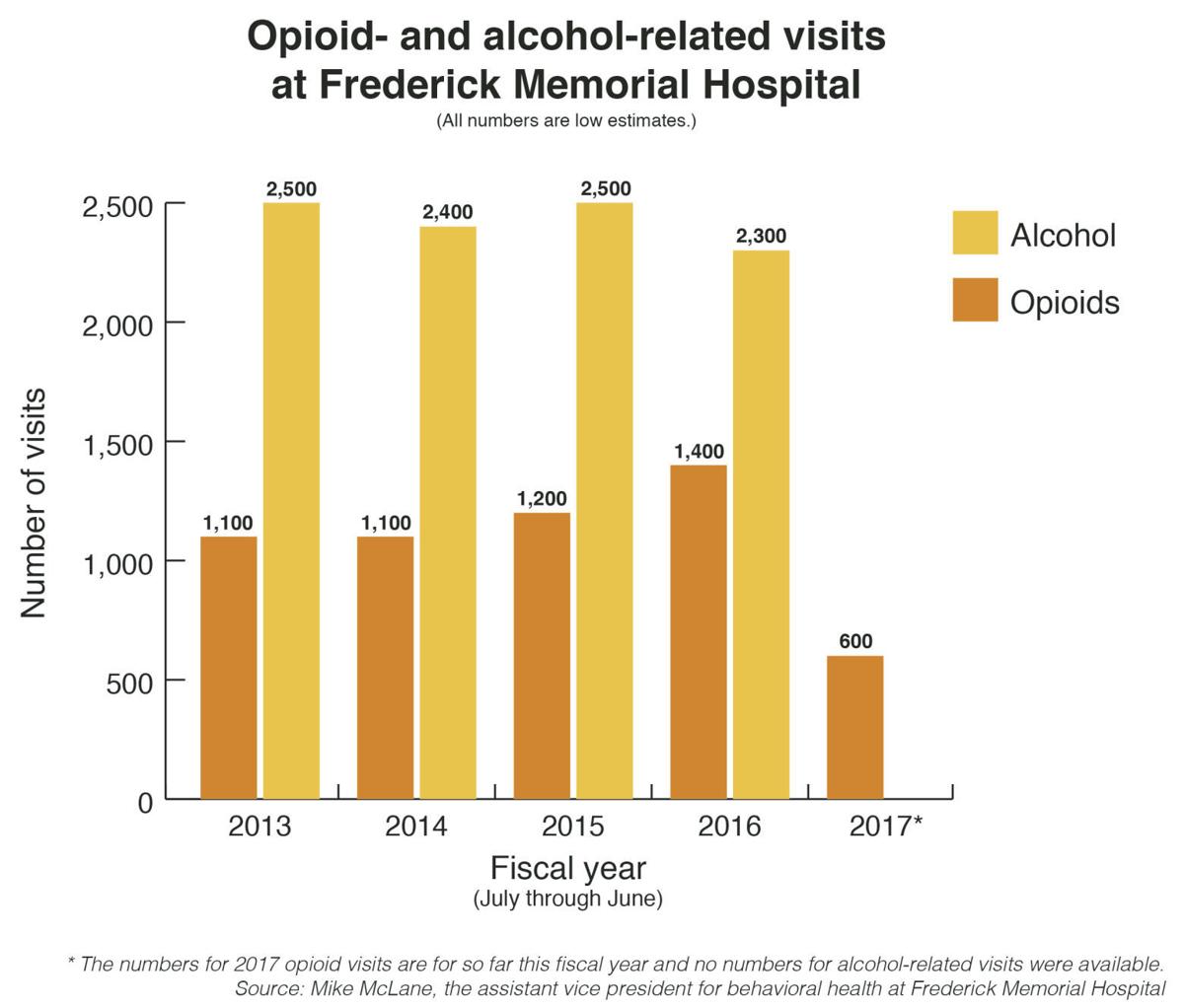 The Emergency Department at Frederick Memorial Hospital has seen an increase in opioid-related visits this year.

Frederick County, much like other parts of the country, is seeing a spike in the number of opioid-related hospital visits.

Since fiscal 2013, there has been a 20 percent increase in opioid-related admissions at Frederick Memorial Hospital, according to numbers supplied by Mike McLane, the assistant vice president for behavioral health.

“So, we are seeing these numbers rise, and I think the best way to look at this is as an equal opportunity issue,” he said. “Race, gender, income level, it doesn’t matter. It’s equal representation.”

That study, released by the federal Agency for Healthcare Research and Quality, used the latest available figures from the Healthcare Cost and Utilization Project (HCUP), the largest collection of hospital care data over time in the United States.

Numbers from 2014 — the most recent year mentioned in the report — put Maryland at No. 1 in the nation for opioid-related emergency room visits. Maryland was also one of four states with the highest rates of inpatient stays.

While admittedly high, the numbers for Maryland were not surprising, said Dr. Christopher Welsh, an associate professor in the Department of Psychiatry at the University of Maryland School of Medicine. Compared with many states, in which opioid abuse rose with the advent of prescription painkillers, Maryland has struggled to quell the use of heroin for decades.

“Baltimore once had one of the highest rates of heroin use in the country,” Welsh said. “A lot of states only started to have these issues in the mid-2000s, when a lot of people developed problems with prescription opioids that turned into heroin. But Maryland has had heroin in the suburbs since at least the mid-’90s.”

Welsh also thought the national report could be a positive reflection on the quality of Maryland hospitals. Because the state has managed opioid abuse for longer than others, he said, there’s been more of an effort to treat those addicted with compassion and respect. That, in turn, could lead more patients to seek inpatient or emergency department care.

“So, some of this isn’t necessarily a bad thing,” Welsh said. “Some of it is that our hospitals are more welcoming and helpful in getting people treatment.”

At Frederick Memorial Hospital, where the rise in visits is a newer phenomenon, staff members have been developing new protocols on how to handle suspected overdoses, McLane said. Many doctors and nurses now wear respirator masks in the emergency room to avoid breathing in fentanyl and carfentanil — synthetic opioids much more potent than heroin itself.

Unresponsive patients who come to the hospital are also automatically treated with Narcan — the overdose reversal medication — if emergency responders didn’t already administer it.

“Because we don’t know, and the epidemic has gotten to this point where we’re assuming,” McLane said. “So, instead of waiting to get back to the bay, where patients might get a little bit more aggressive medical care, we’re giving that care up front as soon as someone comes into the emergency department.”

The demographics for misuse of both substances are also drastically different, McLane said. While alcohol abuse is predominantly associated with white, middle-aged men, opioid use is cleanly split between men and women. Most patients who abuse opioids are under the age of 30, he added, and rates are roughly comparable for all racial and ethnic groups in Frederick County.

“In terms of sheer numbers, the patients we’re seeing are predominantly white, because that’s the predominant race in the county,” McLane said. “But it’s not fair to say, for example, that one race is affected more than another by a slight percentage. The story really is that this is an equal opportunity disease process.”

Both state and county officials are also working to stem the rate of opioid overdoses and hospital visits. Within the Frederick Regional Health System — the umbrella organization that oversees FMH — behavioral health specialists are embedded with many primary care practices to help link addicted patients with available resources, McLane said.

Gov. Larry Hogan dedicated an additional $22 million to local jurisdictions across the state on Friday to help fight the opioid epidemic, including more than $160,000 to Frederick County.

“We’re doing numerous initiatives to try and combat this, not just at the hospital, but as a health system as a whole,” McLane said. “Really, we’re trying to ensure that if we detect this issue out in the community, we’re getting individuals linked up with help before they even get to the hospital.”

When summer break ends, Frederick County campuses will be stocked with a new type of school supply: naloxone, the overdose reversal medication.

Why nothing about what really caused such? The drug companies pushed this drug everywhere you looked! Was advertized as non-addicting derivative for menstral cramps, sore muscles, you name it. The actual effects were known all over the world.
But our FDA is owned by big Pharma. Period. But little mention of any dangerous, profitable drugs, medical devices, surgeries, and dangerous doctors and hospitals.
Obvious reason why no info. Our med system is third cause of US deaths. And will get worse. There are many other drugs that are destroying lives besides the thousands here. Hundreds of thousands more.

Making the USA the most constipated nation on earth lol. Way to be a world power!

What is Sheriff Jenkins supposed to do that he isn't already doing? Go dwelling to dwelling and demand that he check to see if there are illegal drugs on the premises? Post police cars on every block and look for suspicious activity? It is evident by the posts over time that he is criticized no matter what he does. Really...what do the ones who find fault with him rather he do?

Time for a new sheriff

Kelly, please explain and tell us why and whom you would recommend. How about Karl Bickle?

Karl has the qualifications. But he lacks the aggression needed to campaign.

The former FCPD chief would be a great sheriff.

We really need someone with drive. With an education. That loves law enforcement.

CD - Jenkins has never taken a corporal exam. Never took any initiative to move through any ranks. at all. Jenkins is not even qualified to work at most police agencies and or as college security.