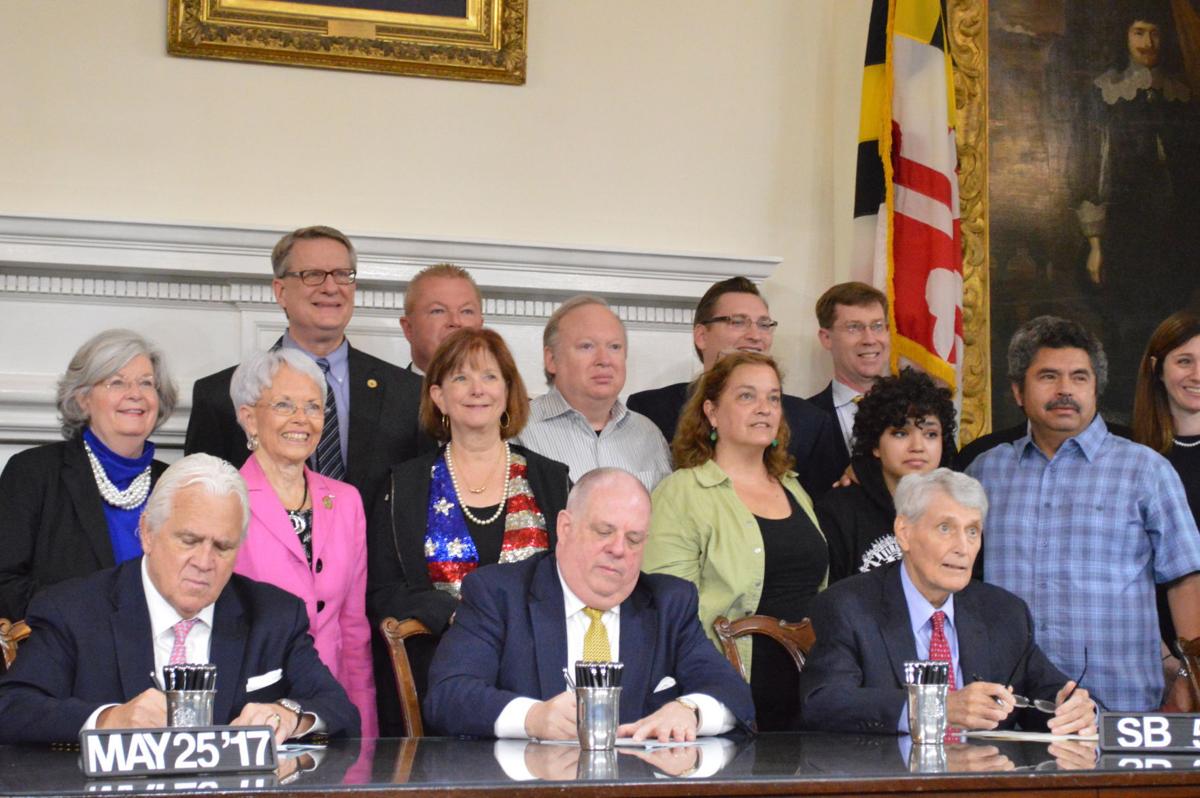 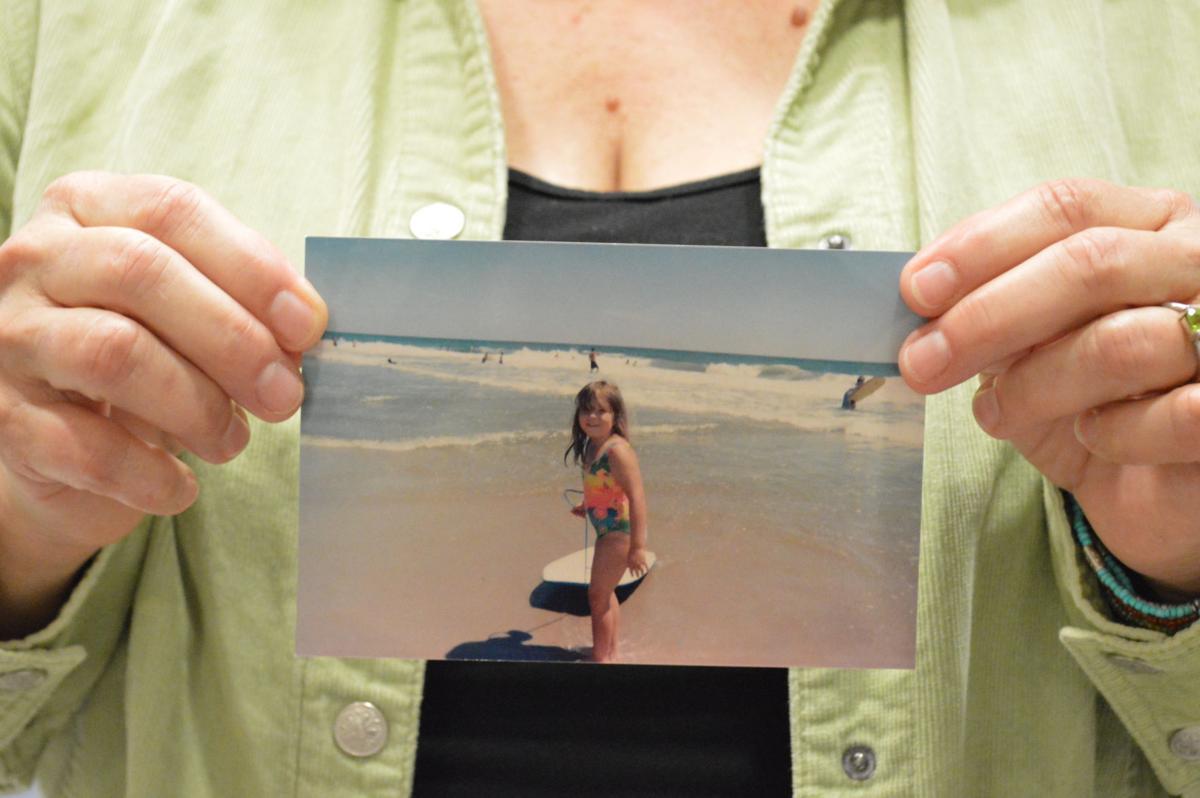 ANNAPOLIS — Matt Godbey, Cheryl Godbey, Ruben Flores and Jessica Flores stood behind Maryland political leaders as they signed a bill Thursday that the family wishes they’d never had a vested interest in.

Senate Bill 539, signed into law Thursday, allows prosecutors to seek an additional 10 years for drug dealers who knowingly sell fentanyl — a drug 50 to 100 times more potent than heroin — and its analogs.

Her father, mother, stepfather and sister were guests Thursday of Sen. Michael Hough, R-District 4, who shepherded the bill through the Senate.

More important than the enhanced penalties in the bill, her family said, was its possible effect in stopping or slowing the sales of drugs laced with fentanyl and its ilk.

“I would hope it would be a deterrent. I would rather have somebody not sell fentanyl than go to prison,” Matt Godbey said. “But if they do sell it, they should be in prison long enough to not want to do it again. To get a real job instead of pushing lethal drugs on to people that are weakened.”

“Maybe they would see that it’s not such a lucrative job,” Cheryl Godbey said.

Hough said it was a call from Matt Godbey shortly before the start of the General Assembly session that caused him to submit the bill this year — even though it had failed to gain passage in the past.

It was ultimately the text of Hough’s bill that was substituted for a measure from Gov. Larry Hogan, a Republican, that passed the General Assembly with broad bipartisan support.

While the family’s emotions were too raw to come down to Annapolis to testify during the legislative session, they sent letters in support of the increased penalty.

“Heroin dealers prey on the weak and vulnerable. They don’t care who dies,” Matt Godbey wrote. “They’ll mix in whatever for profit.”

The toxicology report after Emily’s death revealed fentanyl, morphine and acetone in her blood.

Even as the family tried to help Emily, and supported her through addiction treatment programs, it seemed as if the world were against them.

“She suffered from heroin addiction for about five years. And she would come to us for help, we’d get her into rehab, she’d be good for as long as a year,” Matt Godbey said Thursday. “But she told me that the dealers would call her, come to her work. She tells them that she’s clean and they’d just give her the heroin, leave it there. To get her back on. They were very aggressive in pushing the drugs ... she tried” to stay in recovery.

Dealers who knowingly lace heroin with fentanyl or similar high-potency drugs know they are gambling with the recipients’ lives and should be held accountable, Cheryl Godbey said.

“All the hopes and dreams that I as a parent had for my daughter have died with her. The reason is fentanyl,” she wrote to lawmakers in March.

The Godbeys are just one of thousands of Maryland families devastated by the fatal overdose of a loved one.

Preliminary data from state Department of Health and Mental Hygiene indicates that the overall rate of drug- and alcohol-related intoxication deaths in Maryland accelerated in 2016, with 1,468 deaths from January through September. Intoxication deaths in Maryland increased for the fifth year in a row in 2015, when 1,259 overdose deaths were reported in the state, according to the department. Eighty-six percent of the deaths were heroin- or opioid-related.

Lawmakers have passed a slew of bills over the past two years to address various aspects of substance abuse disorders.

The Justice Reinvestment Act of 2016 set the stage for prioritization of treatment over incarceration.

Dozens of bills were considered during the 2017 General Assembly session and several were signed Thursday.

Hough and Delegate William Folden, R-District 3B, supported a bill that allows for the co-prescription of naloxone — an overdose reversal drug — along with any opioid medication for patients at an elevated risk for overdose. While their bill didn’t pass the General Assembly, the concept was included in a sweeping measure that was signed Thursday: the Heroin and Opioid Prevention Effort (HOPE) and Treatment Act of 2017.

The Prescriber Limits Act of 2017 signed on Thursday requires health care providers to prescribe the lowest effective dose of an opioid, aiming to reduce the number of prescribed opioids on the streets and lingering in medicine cabinets.

A bill championed by Delegate Karen Lewis Young, D-District 3A, in the House will allow parents to compel their children to attend intensive outpatient programs, similar to the process for inpatient treatment. Without the bill, adolescents can refuse to take part in outpatient treatment programs, even when deemed medically necessary.

“These critical initiatives will help us continue to lead the charge against Maryland’s heroin and opioid crisis in our state,” Hogan said of some of the legislation signed Thursday. “Our administration remains committed to treating this crisis like the emergency that it is, and I thank the Legislature for working with us to provide additional tools to save the lives of Marylanders — before it’s too late.”

In the basement of the State House, away from the bustling bill signing ceremony two stories above, Matt Godbey and Cheryl Godbey shared some of the warm memories of their daughter that compelled them to advocate in her name.

Cheryl Godbey reached into her purse for a photo of a young Emily, smiling on a beach in a brightly striped swimsuit. Emily loved the beach — and her smile showed it in the photo.

“She had a very infectious laugh,” Cheryl said.

“She was a very sweet, very generous girl. She was the kind of kid that would bring you a present, bring you flowers just for the fun of it,” Matt Godbey said.

Here's a look at some other bills signed by the governor Thursday:

Limits school testing to 2.2 percent of the school year. That's about 24 hours for elementary and middle schools and about 26 hours in high schools, except for eighth grade, which would be limited to about 25 hours.

House Bill 269 from Delegate Carol Krimm, D-District 3A, doubles the state’s funding for the Housing Navigator and Aftercare Program in the Department of Human Resources to assist families and individuals who are experiencing, or are in imminent danger of, becoming homeless.

Forgives counties and municipalities that received more than $21 million in overpayments of tax revenue from the Office of the Comptroller. Before the bill, Frederick County faced a $700,000 payment to the state after an audit revealed that 89 jurisdictions in the state historically received less revenue from the comptroller’s office than they were due, and 83 jurisdictions would owe money they received that should have gone to a different local government.

A bill from Delegate William Folden, R-District 3B, allows for common law battery — a historic criminal charge — to be expunged under the same circumstances as second-degree assault.

Another measure sponsored by Folden, House Bill 851 expands housing protections for active-duty military members to include military spouses who have to move quickly because the military member has been reassigned to a new duty station.

House Bill 1275 from Delegate David E. Vogt III, R-District 4, requires each unit of state government to designate an employee as a “veterans’ services specialist.” Duties would include coordinating veterans’ services with the Maryland Department of Veterans Affairs.