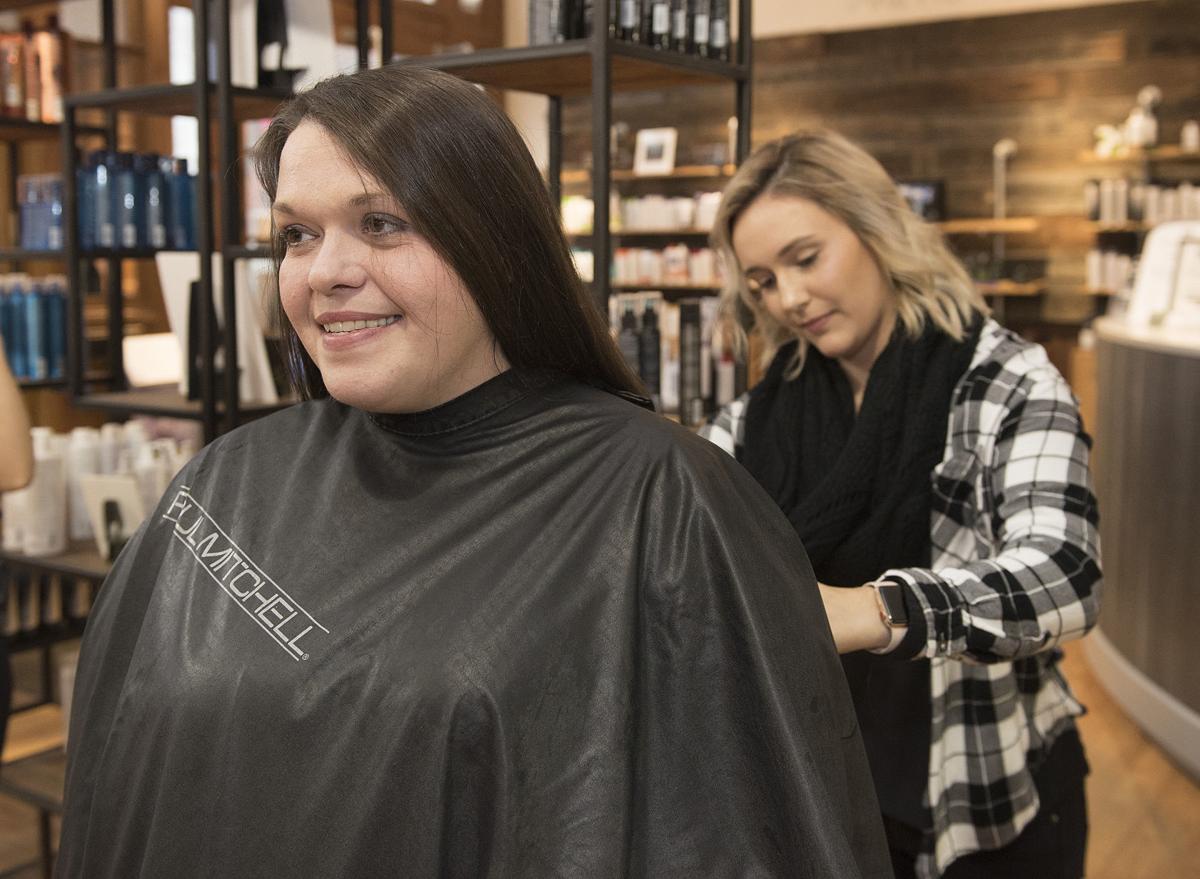 Program graduate Yolanda Jackman, left, gets her hair styled by Bridgette Gibb at The Temple — a Paul Mitchell training salon in downtown Frederick, which provides graduates of the Brooks Behavioral Health Services substance abuse treatment program with free haircuts and makeovers as they try to find jobs and stability. 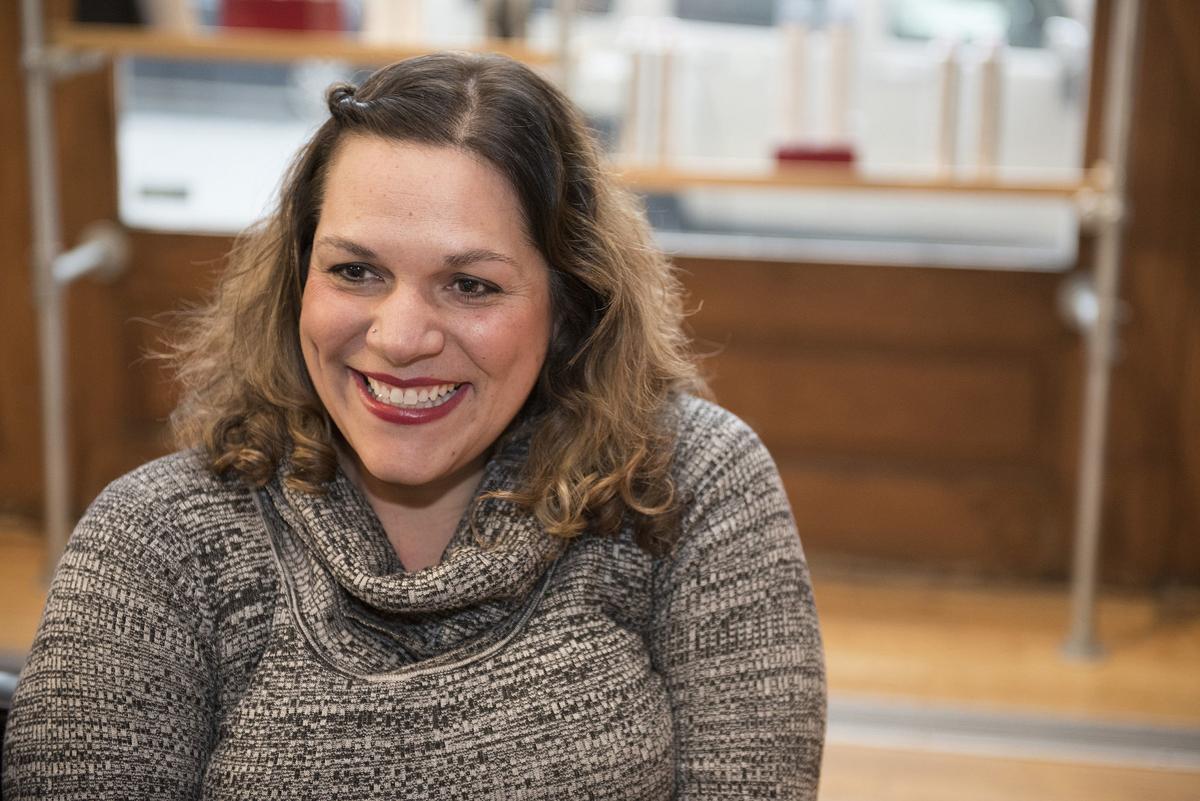 Adriane Brooks, shown here, and her husband, David Brooks, a behavioral health provider who recently opened a private substance abuse treatment practice in Frederick, are partnering with the Paul Mitchell training salon and Frederick Cosmetology School to provide graduates of the treatment program with free haircuts and makeovers as they try to find jobs and stability.

Program graduate Yolanda Jackman, left, gets her hair styled by Bridgette Gibb at The Temple — a Paul Mitchell training salon in downtown Frederick, which provides graduates of the Brooks Behavioral Health Services substance abuse treatment program with free haircuts and makeovers as they try to find jobs and stability.

Adriane Brooks, shown here, and her husband, David Brooks, a behavioral health provider who recently opened a private substance abuse treatment practice in Frederick, are partnering with the Paul Mitchell training salon and Frederick Cosmetology School to provide graduates of the treatment program with free haircuts and makeovers as they try to find jobs and stability.

Yolanda Jackman sat patiently in a chair at The Temple — a Paul Mitchell training salon in downtown Frederick — her long brown hair wrapped in foils. Behind her, stylist Bridgette Gibb hand-painted the ends of her locks with a thick layer of dye.

“We’re doing a technique called balayage,” Gibb explained, carefully coating the strands with a stiff-bristled brush. “So, we’re going to end up with these sun-kissed highlights that are easy to upkeep and grow out beautifully. The type of thing where it looks like your hair has been photo-edited.”

With its shining hardwood floors and orderly rows of luxury hair products, The Temple is a frequent respite for women and men downtown. But for Jackman and for Makayla Tyeryar, another client on Tuesday night, the salon was more like a refuge after a particularly arduous few months.

Both women are recent graduates of Brooks Behavioral Health Services, a recently opened substance abuse treatment center in Frederick. The brainchild of David Brooks and his wife, Adriane, the practice recently established a partnership with The Temple and The Frederick School of Cosmetology to provide graduates — both men and women — with free haircuts, coloring, manicures and makeup application after they leave the treatment program.

It was Adriane who developed the concept for the partnership and reached out to businesses in Frederick. A child of the 1990s, she decided to dub it the “So Fresh and So Clean” program — a nod to the era’s slang and the new beginnings launched by graduates in recovery.

“It’s basically preparing them to move on to the next step of their lives, whether that be getting a job, interviewing for a job — whatever they need,” Adriane said. “It’s a fresh start. And I grew up in the ’90s, and when people said you look fresh, or had fresh sneakers, that was like the ‘it.’”

A breast cancer survivor, Adriane also understands the often under-recognized power of aesthetic change. When she was going through chemotherapy in 2015, her friend taught her to draw on eyebrows and blend makeup to mask the shadow of sickness. Those tips helped her cope as she was fighting the disease.

“I still kept my head high, but I was aware of people looking at me,” Adriane said. “And that was part of it, too — that I wanted the girls to have complete confidence. Like, ‘I’m clean, I’m doing right, my life is on the right track.’ To have that air of confidence about them that I felt when I started on my recovery from cancer.”

Sitting in a salon chair that Tuesday night was only the second time that Makayla Tyeryar, age 23, had ever gotten her hair cut professionally. The Frederick native was 14 when she started experimenting with pain pills and 22 when she was finally ready to tackle a long-term addiction to heroin and cocaine.

She met David Brooks in 2014 while serving time for conspiracy to commit an armed robbery. At the time, Brooks was still serving as a supervisor for Project 103 — a drug treatment program at the Frederick County Adult Detention Center — and saw Tyeryar complete the program on two separate occasions.

Tyeryar said she always worked well with Brooks, and the pair reconnected when she entered his treatment program in late 2017. Her graduation marked the first time she had ever completed an intensive outpatient treatment program and her first full year of sobriety.

While a haircut and a fresh color might not seem comparable to months of counseling, Tyeryar said the service does make an impact. When she was in active addiction, she didn’t worry much about taking care of her hair or doing her makeup. In recovery, she said, the prime focus is getting well. After months of focusing on interior healing, a new look can be a serious confidence boost.

“It is a big thing because it helps with your self-esteem,” Tyeryar said. “I think I went to a salon one time in my life and that’s only because I couldn’t get the color out of my hair. One time. My whole life. So this is cool. I really like it, because I know that I had to complete something and do something to get here.”

The same thing was true for Jackman, who, like Tyeryar, had requested a subtle haircut with flattering, face-framing layers. The 37-year-old Hagerstown resident teared up when she discussed her struggle with substance abuse; unlike Tyeryar, she wasn’t ready to delve into the details. But the haircut and color, after 20 years of addiction and months spent getting clean, was a welcome look forward and a glimpse at better things to come.

“I felt like maybe, by coming out and doing this, [I] might make people see it as possible,” Jackman said. “It’s possible to get it together. I just look back now and there’s no desire to go back to living like that.”

Brooks hopes the new program is just the first of many services he’ll eventually be able to offer his clients. Adriane is already in the process of partnering with local clothing stores to connect patients with professional outfits for job interviews and apartment hunts. In the future, Brooks would like to partner with other providers — dentists to give fillings and fix broken teeth, or banks who could offer financial counseling — to launch patients into life and recovery.

“I think there’s a lot more treatment options now, but we’re still not looking at the next step for a lot of these people,” Brooks said. “Finding them housing, making sure they look and feel good and have the confidence to apply for jobs they actually want. We want them to recover mentally, but we’re also about recovering the whole body.”

What a great partnership between The Temple and Brooks Behavioral. It's a step in the right direction as far as helping our family and friends that are caught up in addiction.