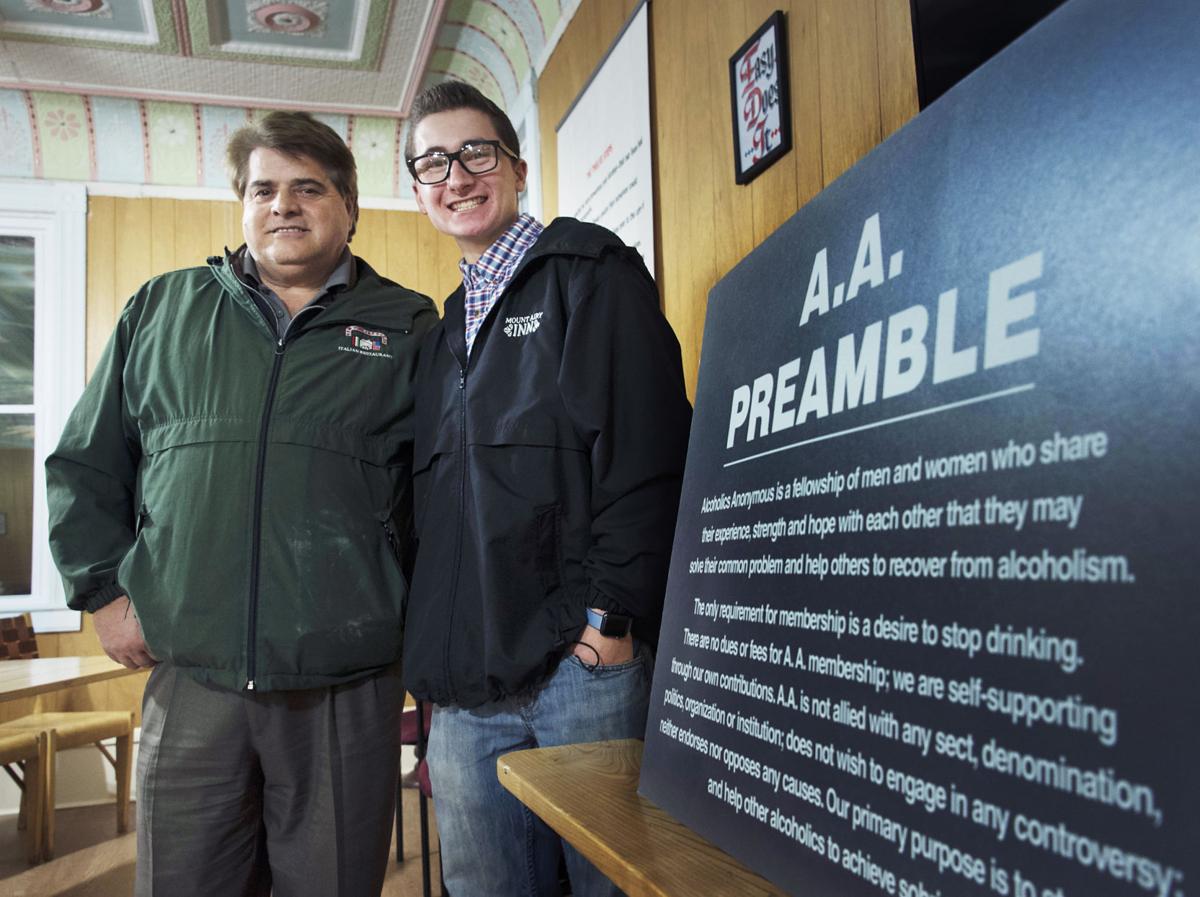 Mount Airy businessman Frank Illiano, left, and employee Gage Thatcher stand in a room in one of Illiano’s buildings before an Alcoholics Anonymous meeting. Staff file photo by Sam Yu

Mount Airy businessman Frank Illiano, left, and employee Gage Thatcher stand in a room in one of Illiano’s buildings before an Alcoholics Anonymous meeting. 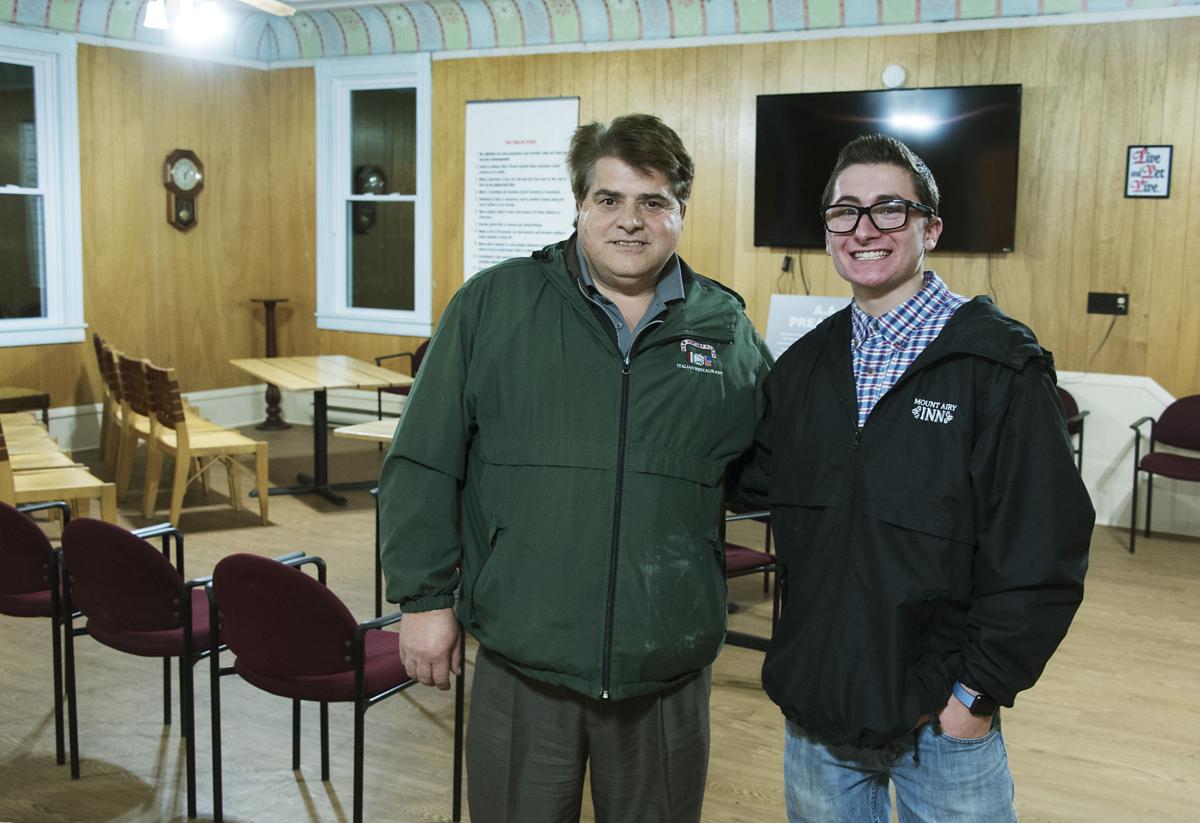 Mount Airy businessman Frank Illiano, left, and employee Gage Thatcher stand in a room in one of Illiano’s buildings before an Alcoholics Anonymous meeting. Staff file photo by Sam Yu

Mount Airy businessman Frank Illiano, left, and employee Gage Thatcher stand in a room in one of Illiano’s buildings before an Alcoholics Anonymous meeting.

Frank Illiano remembers the night he realized he needed to take action.

The owner of the New York J&P Pizza and Mount Airy Inn, among other properties, knew three people who died from drug overdoses in one night.

One of them was an employee of his.

He renovated one of his buildings on Main Street and now hosts nightly meetings ranging from Alcoholics Anonymous to a group for parents of people battling heroin addiction. Often, there’s more than one meeting per day.

“Frank is an angel,” said Kelsea Kephart, a Myersville resident who grew up in Mount Airy and has been particularly affected by the heroin epidemic. “It’s nice to see people like that who actually give a damn and are willing to step up and do something and not just talk about it. People like Frank are how we are going to beat this.”

Kephart has worked with the support of Illiano to set up a 5-kilometer race called Stomp Out Heroin on March 5 at Urbana High School, in honor of a cousin she lost to a heroin overdose.

“Anytime I’ve had questions, he has been there as a sounding board to bounce ideas off of to make this as successful as possible,” Kephart said.

Sitting at the bar of the Mount Airy Inn, Frank Illiano estimates he employs about 20 people who have battled or are battling some type of addiction. That’s one of the largest benefits of his project — once someone takes the step to get help, he can set them up with a job.

Illiano said he has even gone as far as sending one person to rehab on his dime. He estimates he has put about $20,000 of his own money into this project in five months.

“You have to give these people a chance,” Illiano said. “There are so many issues once someone decides they want help that they have to overcome. How are they going to find a job? How do they stay busy? We give them that chance.

“It’s only one chance, though. At the end of the day, we have a business to run. But we have so many of these that have done well. It’s always great to see when they succeed.”

This year, Illiano set up a day when members of the project could get certified to administer naloxone. Naloxone, sold under the brand name Narcan among others, is an opiate antidote that can treat an overdose in an emergency.

Similar to CPR, anyone can get certified to administer naloxone. More than 30 people showed up, and got certified on-site.

“With all of the overdoses going on, it’s sad, but it’s only a matter of time before you’re going to need it,” said Gage Thatcher, marketing manager of the Illiano Group.

Thatcher, 18, got certified himself. Coming from a family of people who have abused drugs, he has seen what addiction can do to someone, and that drives his passion for the project.

He never knows when being certified to administer naloxone might save a life. He recalled an evening he was walking through a grocery store parking lot and saw ambulances helping a girl who had just overdosed. The girl, whom he knew, died two days later after a second overdose, Thatcher said.

The project has traction in the community. Illiano set up a Facebook page, which has more than 650 members, where people consistently post updates on recovery, or inspiring photos for those struggling with addiction.

But Illiano admits he isn’t sure what it will take to make his goal of a drug-free Mount Airy a reality. He plans to talk to policymakers in both Carroll and Frederick counties. He wants to work with the new Mount Airy police force. He wants to get into middle and high schools, so students and parents know the dangers of heroin and other opioids.

“We’ve got to do something,” Illiano said. “This situation is very bad. It seems like it’s a new person every week that we know.”

when are the meetings in Mount Airy

I really like how this man does not do unto others as they do not wish to be done unto.

Today, we will be burying my 24 year old nephew-in-law who overdosed on heroin. We will never understand why.
God bless you, Frank, for trying to save someone's life.

Nicki, I'm very sorry for the loss in your family. I share your appreciation for those like Frank who are trying to help.

So grateful to Frank, and others like him, who are able to be the roots of community based support. Thank you so much, Frank!

livingwell
You wrote exactly what I was intending to write. God Bless Frank! Too often we see obituaries of young people who died unexpectedly or even middle aged people in troubled areas. It is a difficult area in which to help, filled with disappointments. May you be an inspiration to others to widen the fight and spread hope.