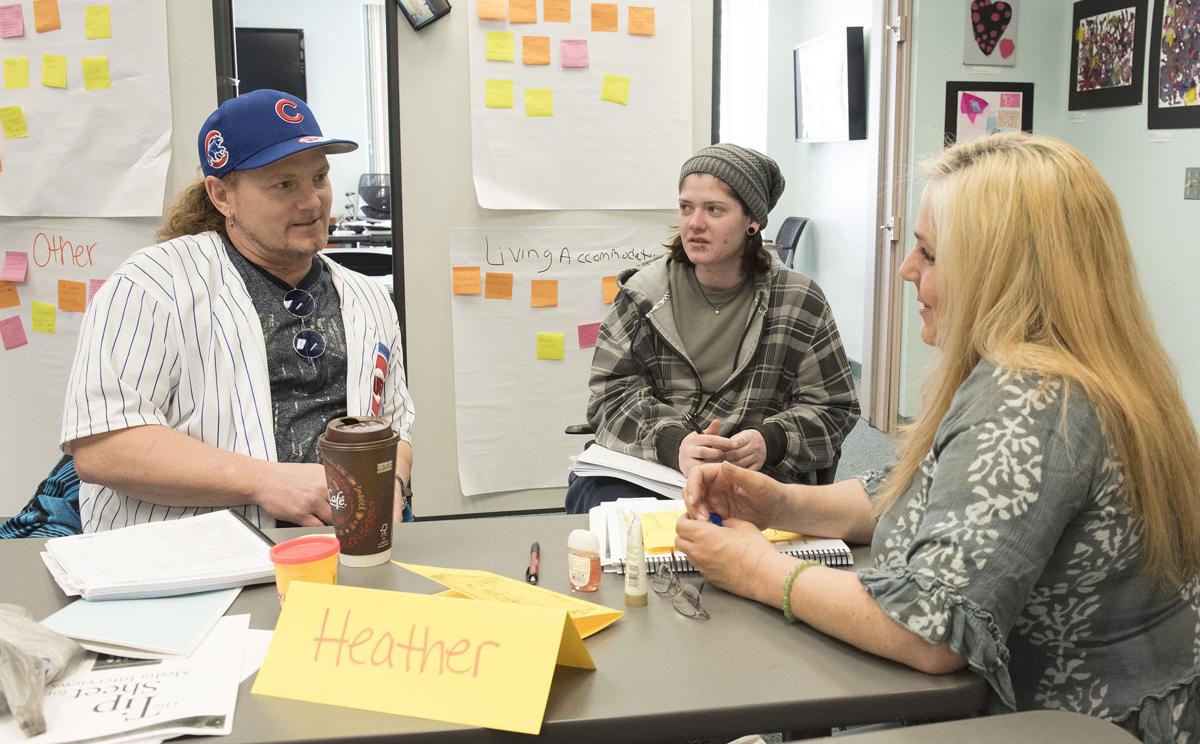 Talking through a group exercise during a recovery coach academy are, from left, Timothy Ayers, Morgan Beatty and Janine Curtis. The health department’s latest 30-hour class to train lay people on how to work with struggling substance abuse addicts graduated in March. 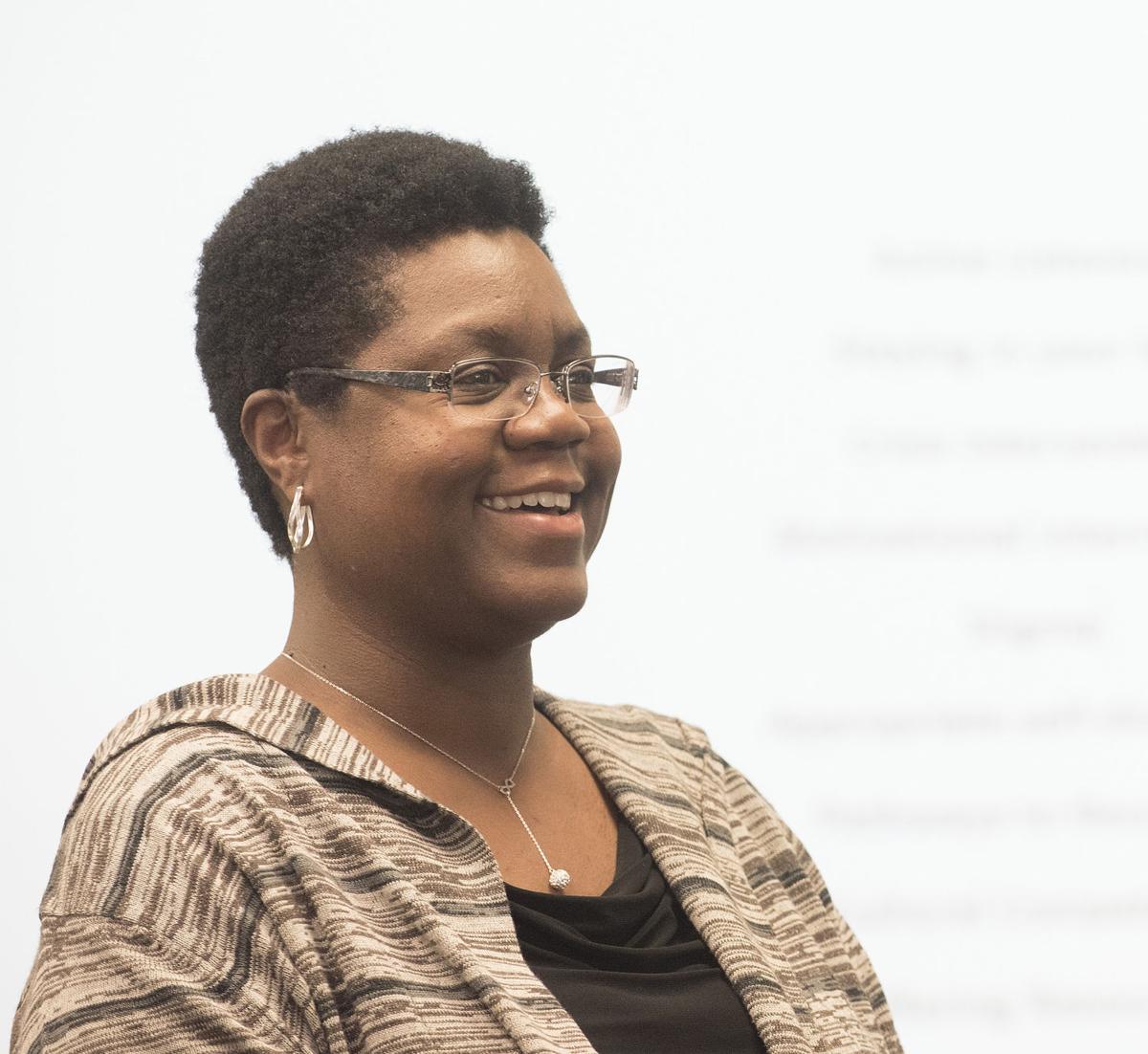 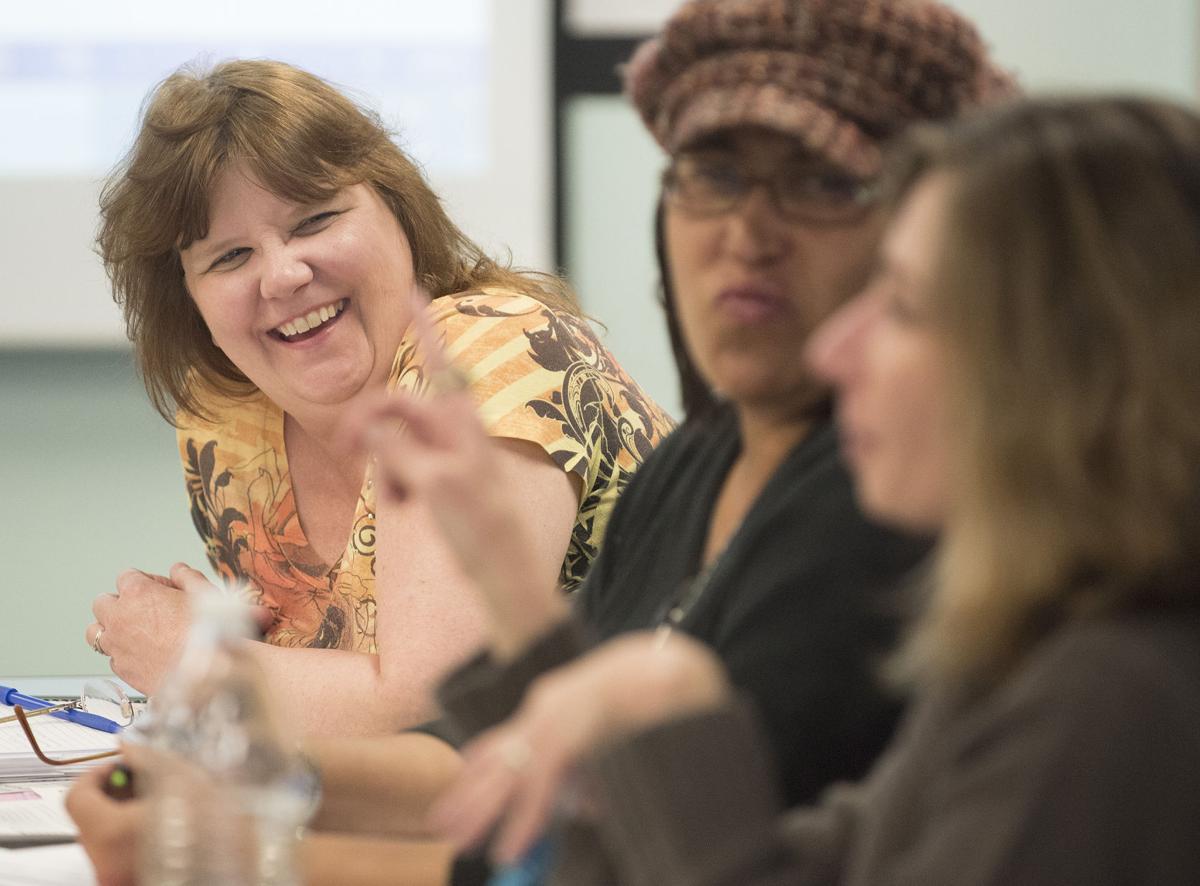 Julie Morris Messer listens as fellow participants in the recovery-coach academy talk during a group discussion. 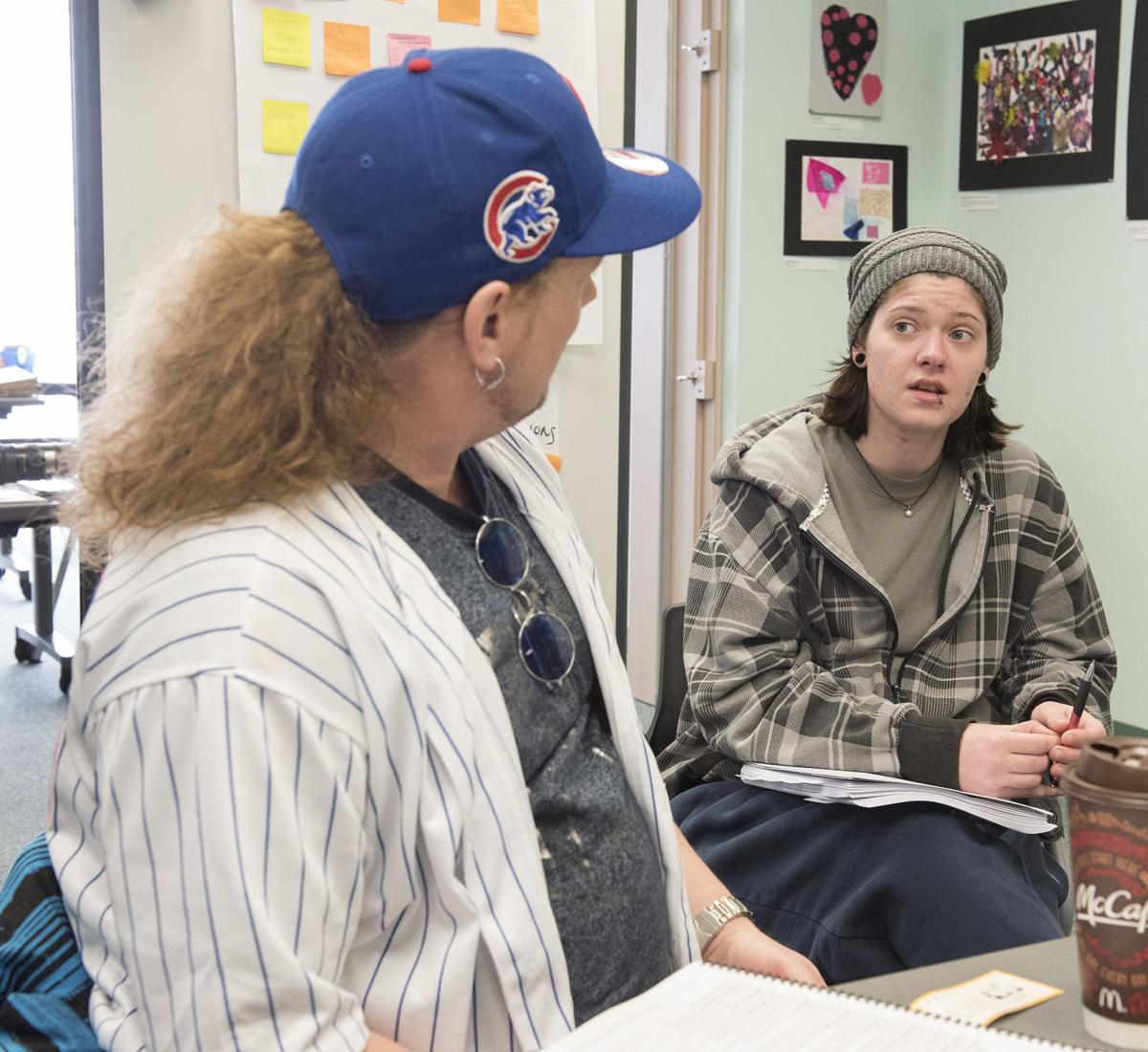 Talking through a group exercise are Timothy Ayers, left, and Morgan Beatty.

Talking through a group exercise during a recovery coach academy are, from left, Timothy Ayers, Morgan Beatty and Janine Curtis. The health department’s latest 30-hour class to train lay people on how to work with struggling substance abuse addicts graduated in March.

Julie Morris Messer listens as fellow participants in the recovery-coach academy talk during a group discussion.

Talking through a group exercise are Timothy Ayers, left, and Morgan Beatty.

It’s never pleasant for Branden Joseph McCallister to confront his addictions, but the 35-year-old Frederick resident decided early in his recovery that he was even less comfortable remaining silent.

“What good is it going to do for me if I don’t let someone know? If I don’t share what I went through?” McCallister said. “If I hold that in and that could have been the reason why a kid didn’t tell someone that these sorts of things were happening to him, then who am I? What do I stand for?”

Early on, McCallister struggled with the trauma and stigma of being a victim of sexual abuse as a child and eventually turned to alcohol and drugs as a way to cope, he said. Offenses in juvenile court turned into convictions for more serious charges when he reached adulthood, culminating in McCallister being shot for the first time on Aug. 11, 2007.

More violence followed and the then 25-year-old McCallister was prescribed opioid-based painkillers to help during his physical recovery.

“My doctor became my drug dealer,” McCallister said, shaking his head with a wry smile. “I really thought I could stop anytime, but I couldn’t. ... By the grace of God, I ended up getting incarcerated before it could progress into heroin.”

McCallister, seeking out recovery programs and counseling after his release, became intrigued when he came across literature advertising a Frederick County Health Department class designed to train mental health counselors and private citizens alike to be “recovery coaches” for others struggling with substance abuse.

McCallister was one of the first to sign up for the latest 30-hour class that began March 16 at the health department’s headquarters on Montevue Lane.

By the time he graduated Tuesday, the former addict was already trying to think of ways he could use his former experiences to help save others from his fate.

“I can go into some neighborhoods where the police or some other people can’t go and have people talk to them,” McCallister said. “... Not everyone is going to listen or accept what I have to say, but there’s going to be some who are interested.”

The need for people with personal experience in addiction and recovery to get involved in counseling for others was hard to overstate, said Santita Prather, a recovery support coordinator with the health department.

“You do want to have those people who have that lived the experience of addiction and recovery and/or mental illness,” Prather said. “... The idea is that we can train the recovery work force so that they’re equipped to meet people in recovery where they are.”

Prather was one of just three health department employees who traveled to the Community for Addiction Recovery in Connecticut to become certified to train recovery coaches in March 2012.

Today, the class draws a wide range of applicants. While many participants choose to attend based on their own experiences with addiction recovery, others are pursuing certification as official recovery specialists, Prather said.

The 30-hour course meets one of several requirements put forth by the Maryland Addiction Behavioral Health Certification Board for certification, Prather said.

Whatever the motivation for signing up, the course has proven popular, Prather said. In the five years since, Prather and her peers have hosted 13 classes and graduated 184 coaches.

Speaking from her own perspective as a recovery support specialist, Prather said she believes part of the success of the class is due to its reliance on less traditional tactics.

For example, recovery coaches are taught to encourage addicts to take control of their own recovery. Another approach is the 12-step recovery models popularized by Alcoholics Anonymous and Narcotics Anonymous.

“The whole idea of the recovery coach academy is it’s self-directed … self-directed for the person themselves,” Prather said. “They’re in the driver’s seat for their own recovery, we’re just learning to pay attention to the changes they would like to make.”

Getting away from the more abstract communication tactics outlined in the training, most participants had their own ideas about what the most useful information in the program was based on their individual experiences with recovery or in counseling others.

For Angela Davis, who works in the mental health field and was also celebrating 16 years of sobriety, it was refreshing to see that the program considered recovery as a fluid process, rather than a black-and-white issue.

“For a lot of people, there’s this tendency to see recovery as either succeeding or failing; either you’re using or you’re not, and that’s wrong,” Davis said.

Davis referred back to her own experience getting clean from crack cocaine and other substances as an example. While her original sober date was Feb. 18, 1993, her current sober date after relapsing is March 27, 2001.

“It could be two steps forward, one step back, or you could take four steps forward and one back,” Davis said. “It’s not concrete. There are different barriers and we sometimes stumble, but we can recover. Recovery is happening every day.”

The new crop of recovery coaches were graduating the program as overdoses from opioids, and specifically heroin, continue to rise beyond previous records.

Police responded to a record 403 heroin overdoses in 2016 in Frederick County, according to data collected from local police agencies and compiled by the Frederick County Sheriff’s Office. A record-high 51 of those overdoses were fatal, the data indicates.

Police have responded to 43 overdoses, including four fatalities, from Jan. 1 to Feb. 28 of 2017, the sheriff’s office data indicates.

Liz Hebb said the depressing statistics so prominent in the news was another motivator for her to sign up for the health department’s program.

“We keep putting faces to who we’re losing, but we’re not putting a face on the recovery effort,” Hebb said. “We’re not humanizing the recovery process as much as we should.”

By relying on the skills and different perspectives she picked up from the course and her fellow attendees, Hebb hopes to increase the effectiveness of her own fledgling recovery and anti-drug network, People Against Narcotic Drug Abuse.

Hebb said she founded the group, which goes by its acronym, PANDA, following the loss of a loved one due to a drug overdose.

“We don’t have to lose these people,” Hebb said, referring to the climbing overdose rates. “And, with this kind of training and awareness, maybe we can save the next generation.”

It has always bothered me that law enforcement has not been able to stop drug pedaling. They know who is dealing, they watch it going on. Is it the fault of judges not enforcing the law by handing down long jail sentences? Looking at our prisons, you would think not. What does the law do to work with teachers to stop drug pedaling and use around schools? Education on drugs is good, but is lack of drug knowledge really the problem?

Wonder who is paying for this training?????