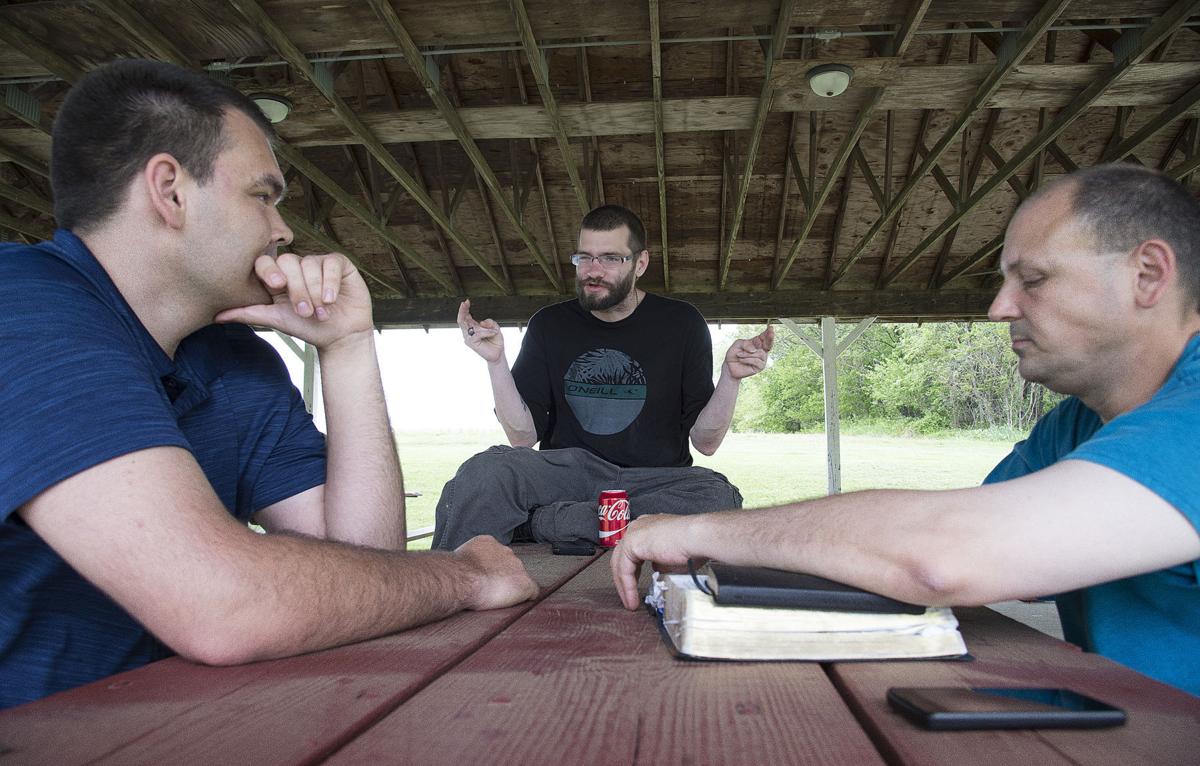 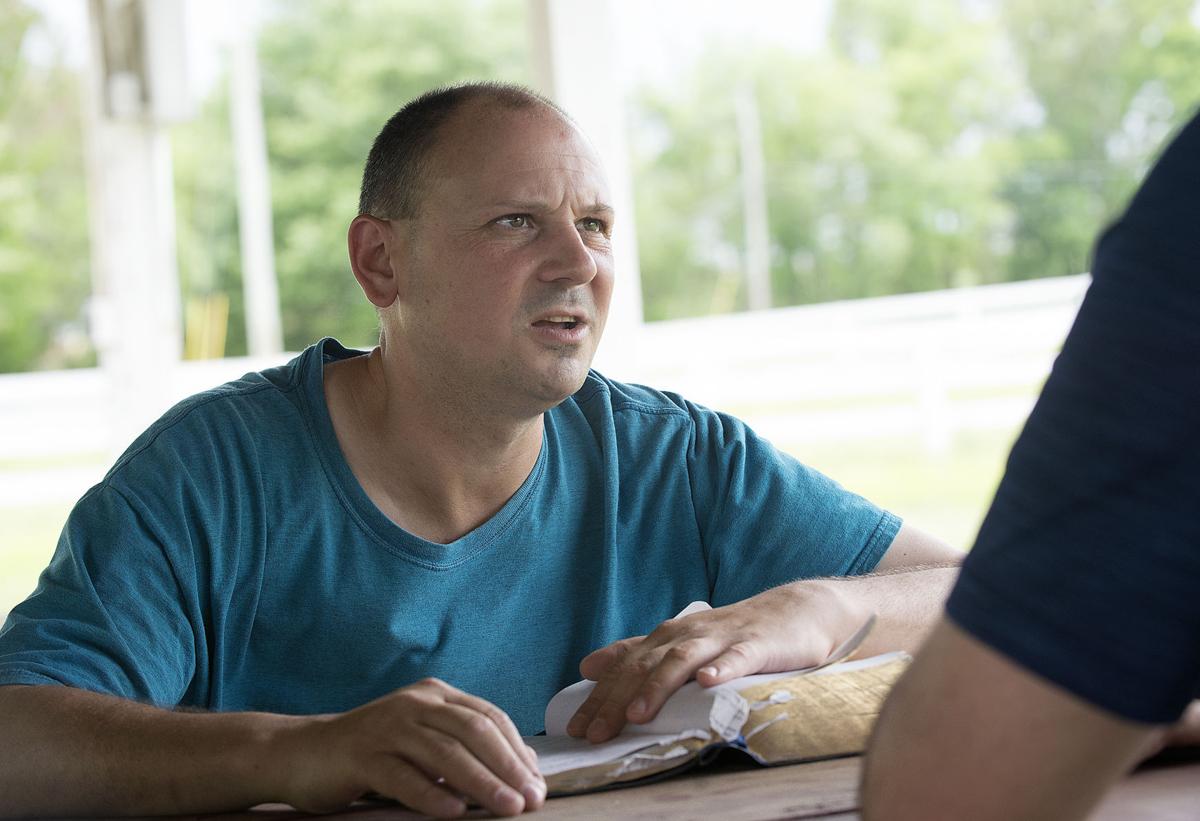 Bill Click, a client in the residential substance abuse treatment program at The Youth Ranch near Urbana, reads a passage from the Bible earlier this month during a discussion with education coordinator J.D. Garris, right. 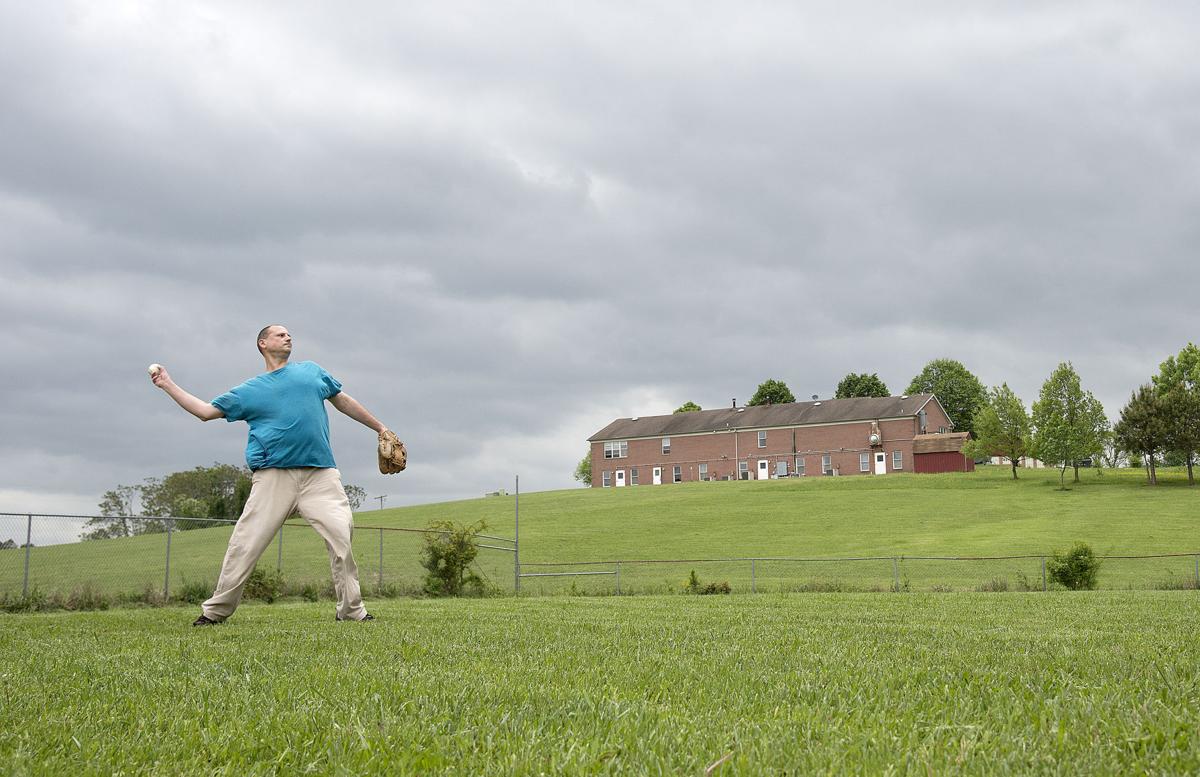 Bill Click, a client in the residential substance abuse treatment at The Youth Ranch in Urbana, throws a baseball around earlier this month before a Bible study class.

Bill Click, a client in the residential substance abuse treatment program at The Youth Ranch near Urbana, reads a passage from the Bible earlier this month during a discussion with education coordinator J.D. Garris, right.

Bill Click, a client in the residential substance abuse treatment at The Youth Ranch in Urbana, throws a baseball around earlier this month before a Bible study class.

It took some time and some changes of plans, but the first person graduated from a substance abuse treatment program at The Youth Ranch last month — though he’s not exactly the graduate directors had in mind one year ago.

The facility — which operated as the Maryland Sheriffs’ Youth Ranch for 36 years on Fingerboard Road near Urbana — announced last May it would reopen as a substance abuse treatment program for adolescents.

The first graduate, Gerald Robertson Jr., joked recently that he’s young ... but not that young.

Robertson, 31, is the first person to complete the residential intensive outpatient treatment program at the ranch.

While intensive outpatient treatment is offered there for anyone over 12 years old — men, women, boys and girls — the residential component is limited to men at this time, said Director Linda Clark.

“Really, there’s such a great need for men, we can’t keep beds open for adolescents during this time. So that’s why we decided to go with just a male program for the residential piece,” Clark said this month.

Robertson said he was a little thrown when he first heard the name of the program, which he was referred to from Frederick County’s Drug Treatment Court.

But a short time after he arrived at the 204-acre property with rolling hills between Fingerboard Road and Interstate 270, he was sold.

“It’s therapeutic. They’ve got all this nature out here for you to take in,” Robertson said. “I just love seeing all that green. It’s pretty out here.”

Robertson said that country serenity — far from the neighborhoods where he once used heroin — helped his recovery.

He continues in the drug court program and recently stopped back in at the ranch to talk with some of his old neighbors.

The 16-bed residential building where the men in treatment live is about half-full at the moment. Their medical needs are covered through Medicaid and they pay for room and board each week.

The residence fee also covers food and the activities in a structured daily schedule for residents who are out of work.

The ranch operates much like a sober home. The men are free to come and go, hold jobs and make calls on cellphones, but there’s random drug testing and a lot of oversight to keep them accountable in their sobriety, administrator Beth Waddell said.

“It’s those little freedoms they let you have that makes you feel human,” said Rob Woolard, 28.

Bill Click, 39, said the ranch has been his favorite treatment center of several he’s tried in an effort to kick addiction to cocaine and Spice, a synthetic marijuana.

“I like how it’s a small number of people. There’s more focus and more attention,” he said.

While the ranch held open its residential wing for a season to serve adolescents, that is an issue with the state’s consent law.

The Maryland General Assembly passed a bill this year that could help with adolescent admissions, but it hasn’t been signed by Gov. Larry Hogan (R) yet, and won’t take effect until October if it is.

The bill, sponsored by Delegate Karen Lewis Young, D-District 3A, would treat programs like The Youth Ranch similar to inpatient treatment centers.

Currently, parents can compel treatment for their children at inpatient substance abuse and mental health treatment when it’s medically required.

The bill would allow parents to compel their children to attend intensive outpatient programs as well.

The change could lead to a significant number of new adolescent patients, Clark said.

“And they haven’t had the life experience to know. Right now, it’s fun, it’s recreational and they’re having a good time. They don’t know that it’s going to destroy your life in the future,” Waddell said.

If the bill is signed and takes effect in October, the ranch will consider reopening a second residential building for adolescent boys, Clark said.

The program is also working to increase revenue.

The Youth Ranch has applied to be accepted under private insurance plans. In March, the Maryland Community Health Resource Commission voted to award a $10,000 planning grant to the program.

Delegate William Folden, R-District 4, tried to secure $150,000 in bond funding for renovations at The Youth Ranch during the General Assembly session, but no money was ultimately included in the state’s capital budget. He was in Annapolis last week trying to secure funding in a different way.

Clark said while the ranch has gone back to the basics for things such as fundraising, some things about the ranch’s history — the annual alumni picnics, for example — will firmly carry on the property’s legacy.

“We’re really good at developing relationships with the guys. We were good with our kids before. We still have relationships with those kids now. And this is a new group where we’re going to do the same,” Clark said. “They’re like your family once they’ve been through here.”

What: Frederick Keys Pack the Park fundraiser for The Youth Ranch

Details: Adult tickets are $10, student tickets are $8, and children under 2 are free. Tickets must be purchased through The Youth Ranch; contact Emily Clark at 301-874-4701 ext. 113, or at EClark@TheYouthRanch.org.

ANNAPOLIS — The Maryland General Assembly passed 935 bills and five resolutions during its 90-day session. Here are the bills introduced by Fr…

It would have been great if Folden had received the $150,000 for this worthwhile program, instead of wasting millions of tax payers dollars on a hotel in downtown Frederick.