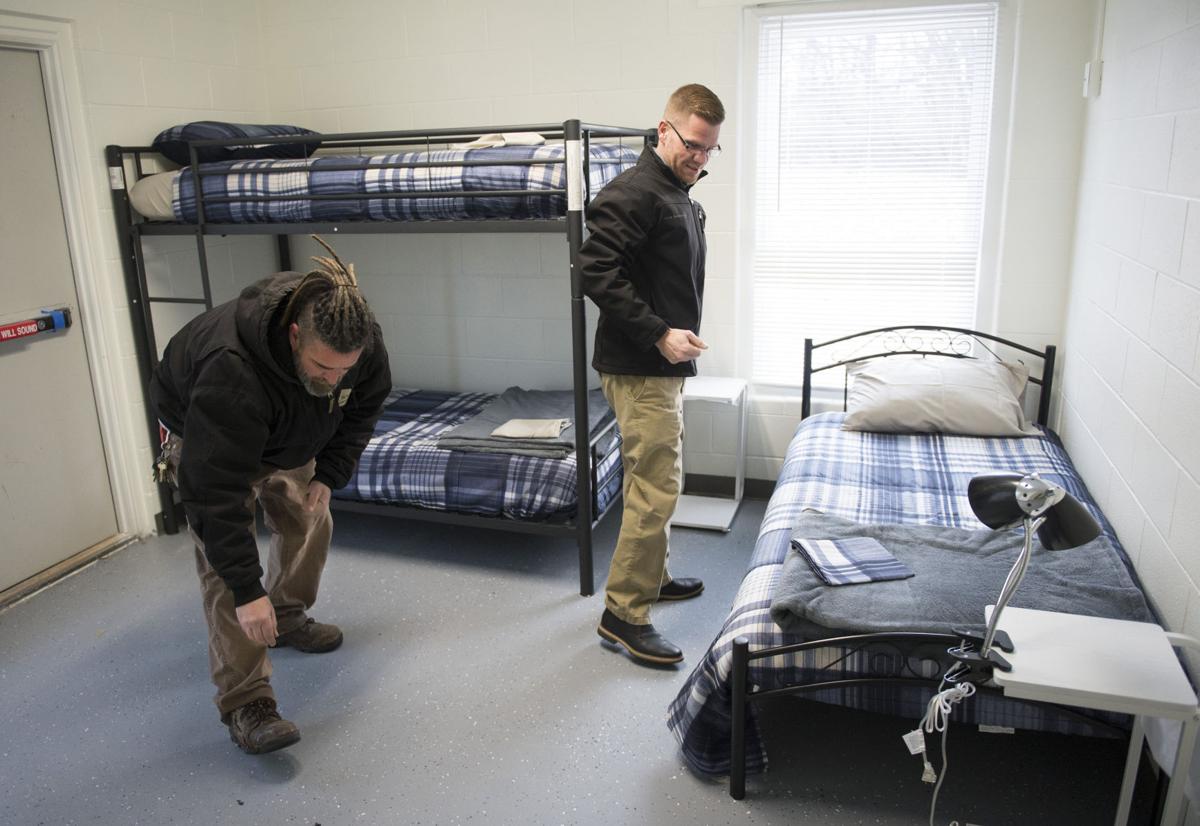 Korey Shorb, right, executive director of The Ranch rehabilitation and treatment center, and facilities manager John Leizear walk through one of the rooms of a building recently renovated to add capacity to the center. 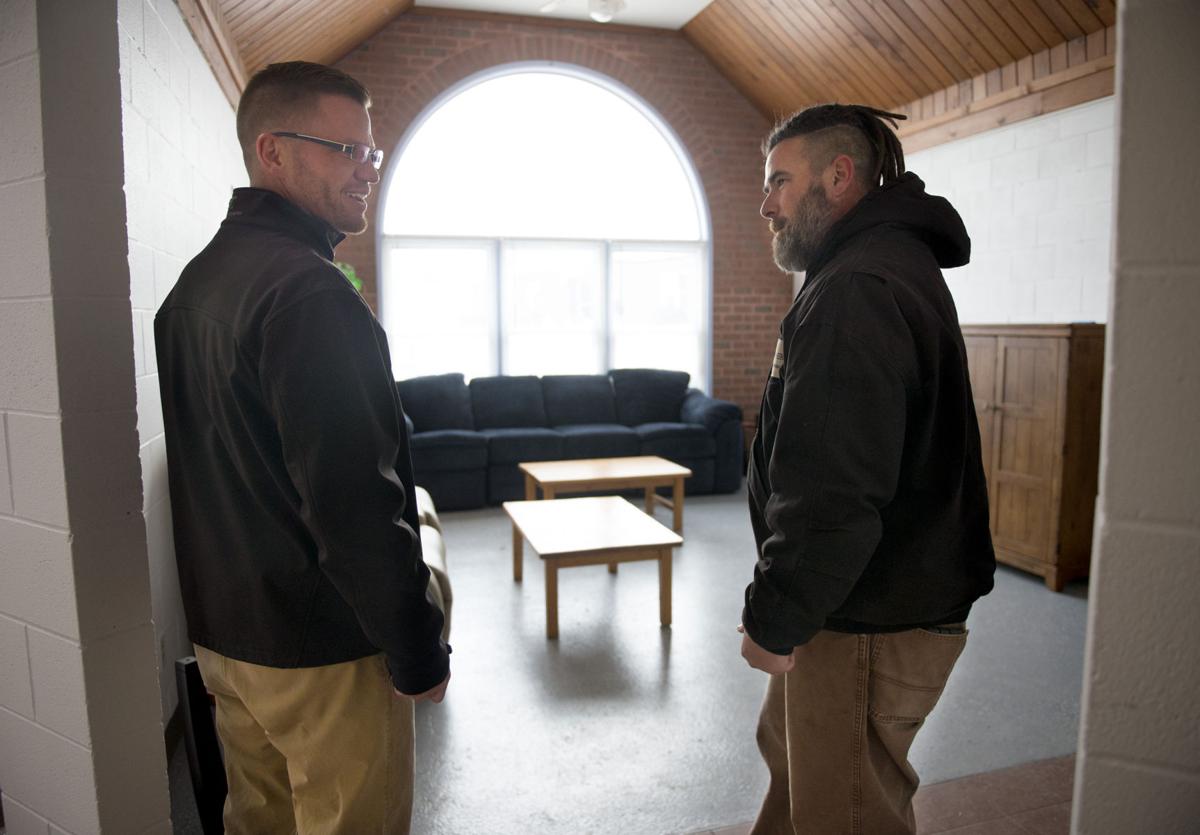 Korey Shorb, left, executive director of The Ranch rehabilitation and treatment center, and facilities manager John Leizear walk through one of the buildings recently renovated to add more capacity to the center. 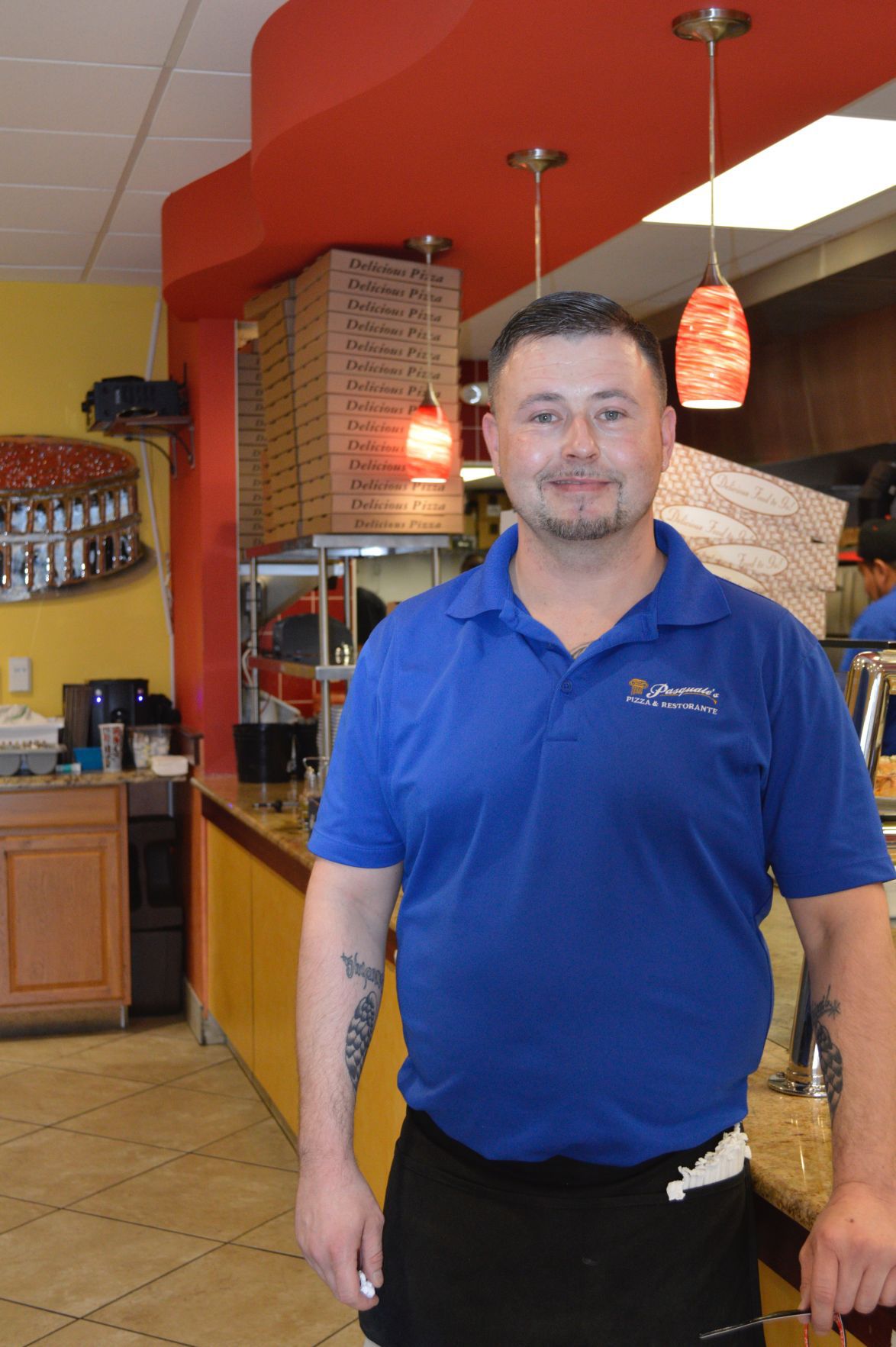 Jason Sturgeon is an addict in recovery who completed treatment at The Ranch in August 2017.

Korey Shorb, right, executive director of The Ranch rehabilitation and treatment center, and facilities manager John Leizear walk through one of the rooms of a building recently renovated to add capacity to the center.

Korey Shorb, left, executive director of The Ranch rehabilitation and treatment center, and facilities manager John Leizear walk through one of the buildings recently renovated to add more capacity to the center.

Jason Sturgeon is an addict in recovery who completed treatment at The Ranch in August 2017.

Jason Sturgeon was looking for stability after he completed the residential recovery program at Mountain Manor Treatment Center in Emmitsburg.

A self-described “chronic relapser,” the 35-year-old Frederick resident wanted to avoid a living situation that would put him back in proximity to drug and alcohol abuse. That meant not returning to his now ex-wife, whom he followed from Indiana to Maryland more than three years ago. But without any family in the area, it was hard to find a stable environment.

The solution, for Sturgeon, was a two-month stay at The Ranch in Buckeystown — an all-male residential facility set on 204 acres of rolling hills. Formerly known as The Youth Ranch, the site has gone through many incarnations, from a residential center for young men with behavioral problems to a treatment program for youth with substance abuse problems.

Since early 2017, the site has operated as a residential intensive outpatient treatment program for adults who struggle with substance abuse.

That switch in focus has proved hugely successful for the facility. The Ranch didn’t see one client when it was still operating as a treatment program for youth, said Nanci Hamm, a board member and deputy state’s attorney for Frederick County. Within a day of its rebranding, the facility already had its first new client.

The growth has been so substantial that board members plan to open a new residential building with 22 beds by the end of January, said executive director Korey Shorb. According to Hamm, about five clients are on the waitlist for the new space.

For Sturgeon, The Ranch was a stabilizing force in the tenuous months of early recovery. He said that counselors with the program helped him delve into the causes of his addiction, including feelings of inferiority that he tried to mask with drugs and alcohol.

Getting in touch with his emotions made it easier for him to seek help, and the environment at the facility was also crucial, he said. Days were structured and constructive — a change from the “hurricane” of his life while he was still using drugs — and Sturgeon was surrounded by other men who were also working toward recovery.

“It’s a fellowship of friends,” he said. “I went there because I knew I needed that foundation that would ground me as I went further along. There was a part of me that wanted to go right back to my wife, but I knew that probably wasn’t the most conducive for my recovery.”

It was actually Shorb who suggested that Sturgeon live at The Ranch, even before he took over as its executive director. The two men met when Shorb was working as a counselor at Mountain Manor and Sturgeon requested his mentorship.

As a fellow addict in recovery, Shorb understood that residential treatment could be critical to long-term success. But the options in Frederick County are still fairly limited compared with the overall need, he said.

There are only three local residential treatment centers: Mountain Manor, which also provides inpatient medical supervision, The Ranch, and Wells House@Gale Recovery in Frederick. Together, the three facilities provide roughly 165 residential beds, according to counts provided by staff members.

That capability doesn’t come close to meeting the need in Frederick and surrounding counties, said Charlie Mooneyhan, executive director of the Wells House. His facility alone receives 20 to 25 calls a day, inquiring about available beds. Waitlists for all three treatment programs are usually at least a week long. And 211 Maryland, a service referral hotline, received 423 calls related to substance abuse and addiction in the past year.

“We constantly have huge waiting lists,” Mooneyhan said. “I could have 300 beds and I would be able to keep them all full. And the problem is, a lot of these people can’t wait until a space is available. They’ll withdraw and they’ll go back to using.”

There’s also a shortage of sober living homes for patients who complete treatment but still need a stable environment as they acclimate back to everyday life, Hamm said.

Sturgeon counted himself lucky when he found a spot at a house run by the Up and Out Foundation, a recovery advocacy organization founded by Shorb.

Living at the home with other men in recovery certainly helped ease his transition, Sturgeon said. He’s since moved to a town house in Frederick and found a job at Pasquale’s Pizza in New Market through the friends he made in recovery. He’s now getting ready to renew his driver’s license and looking forward to his daughters possibly coming to stay with him over the summer.

Not everyone is able to find a such a solid footing so soon after treatment, Hamm said. And from her perspective of the state’s attorney’s office, the need for recovery homes will only continue to grow.

“I’ve been prosecuting for 23 years — for 23 years I’ve been doing criminal narcotic cases and I’ve never seen anything like this,” she said. “I thought the crack cocaine in the ’90s was bad, but that was nothing. The epidemic we’re seeing today is just so awful, in both the volume of cases and the deadliness of the drug.”

As this article points out, the addition of 22 recovery beds is positive, but it also indicated that if there were 300 (new) beds, they could be kept full given the huge magnitude of the existing and expanding drug problem. Adding less than 10% of what is needed, although certainly a positive step, does not ‘fix’ the drug problem. The new users coming ‘onboard’’ every day are obviously overwhelming the infrastructure capability to keep up. We must stop, or at least slow down very significantly, the numbers of these new users, through Prevention and Education, if we are to begin to make a real dent in the problem. The public needs to be informed just how far behind we are in addressing the overall drug epidemic.

computers, well said. IMHO it starts with pot, the gateway drug that is far more potent and addictive than the pot from the 70's. We keep legalizing it and we keep sending a message it's Ok. It's not OK.

Studies have shown that 90% or more of heroin addicts start with prescription drugs- not pot...

Ah ha. Eliminate the evil weed and addiction. Will vanish. But what about that pesky legal tobacco? And all the liquor stores and bars? It could not have anything to do with over prescribing by physicians in their Pain Clinics. Get rid of weed and maybe, uh, rock n roll and the drug problem wil. Be over. After all, how could WE lose the war on drugs?.