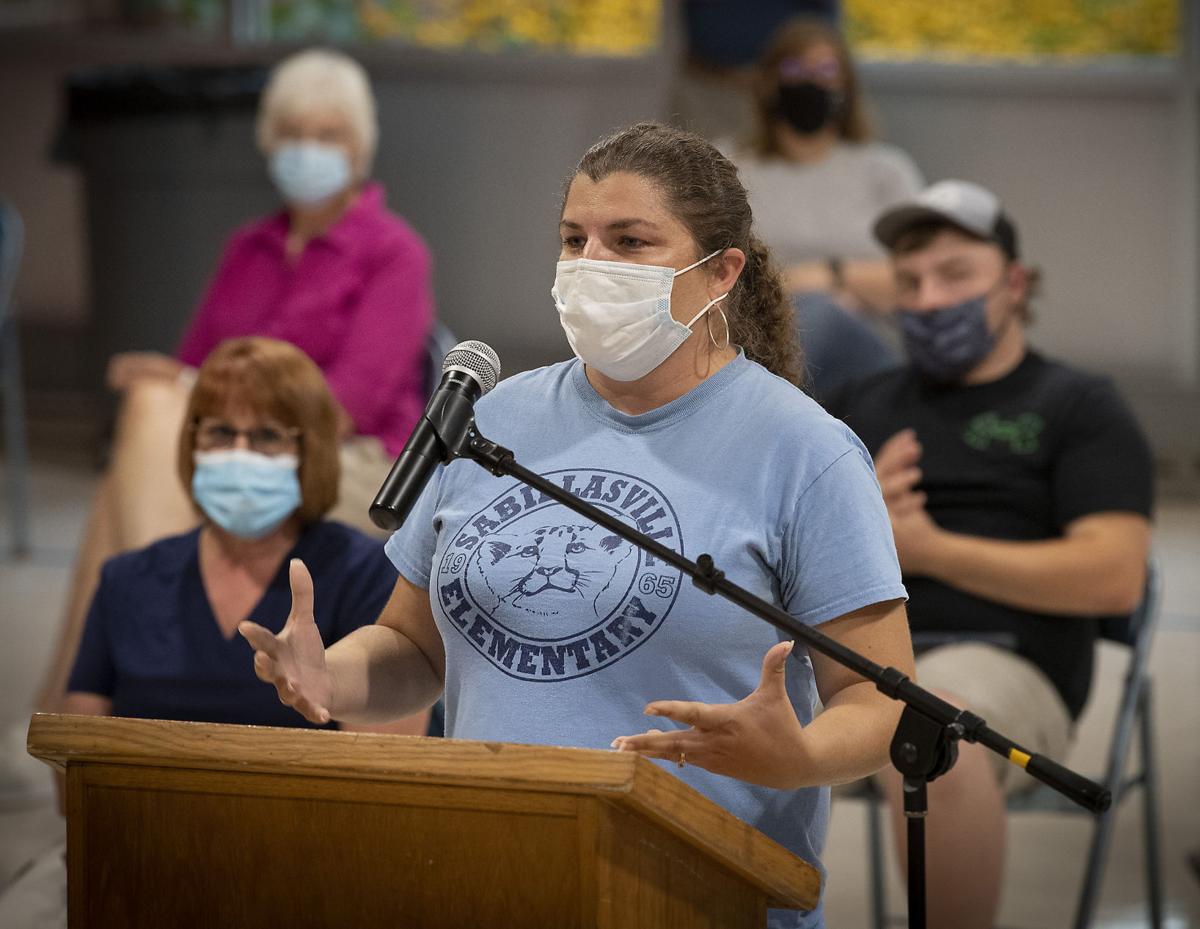 Alisha Yocum, president of Sabillasville Elementary’s parent teacher organization, shares her concerns regarding the future of the school as the first speaker at a hearing in August. 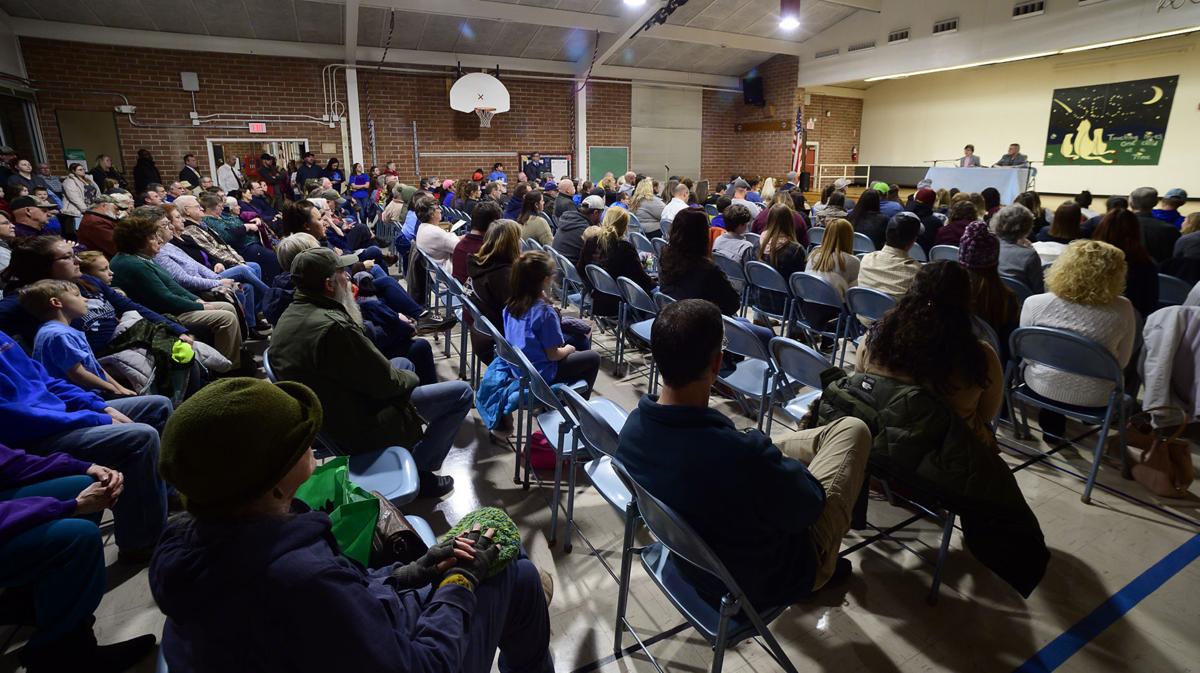 Terry Alban, left, and Brad Young, then-president of the board of education, sit on stage during a community meeting at Sabillasville Elementary School in February 2020 to discuss the future of the school. 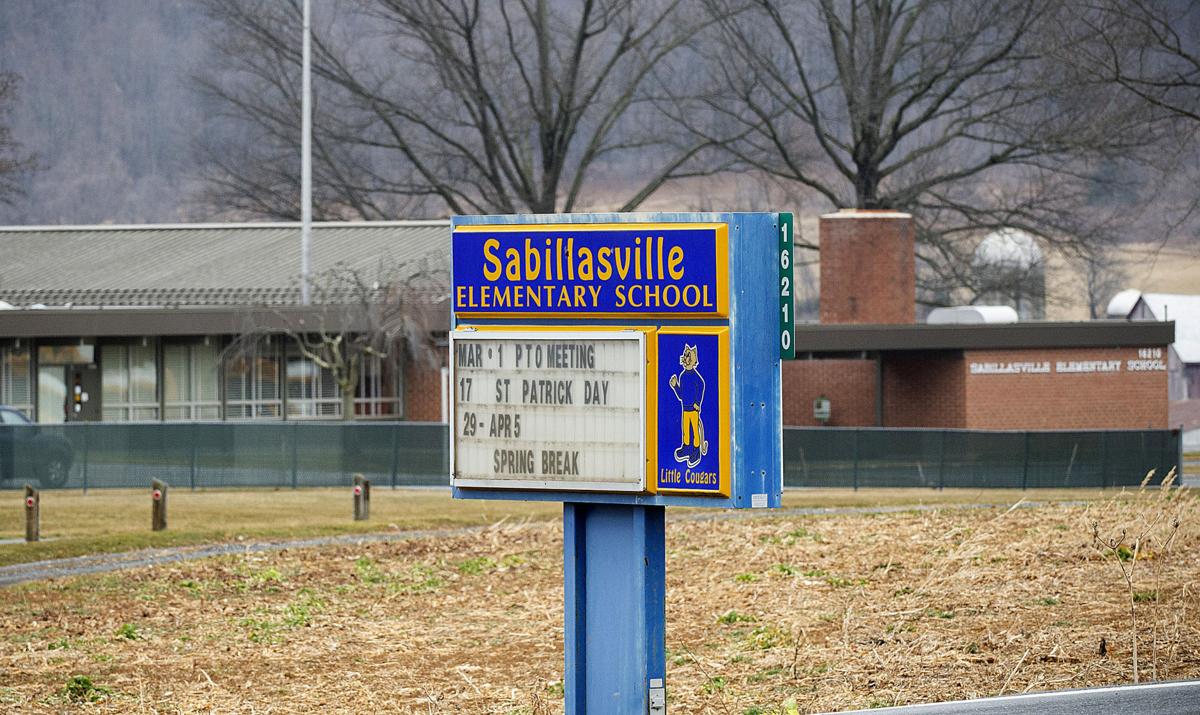 Alisha Yocum, president of Sabillasville Elementary’s parent teacher organization, shares her concerns regarding the future of the school as the first speaker at a hearing in August.

Terry Alban, left, and Brad Young, then-president of the board of education, sit on stage during a community meeting at Sabillasville Elementary School in February 2020 to discuss the future of the school.

Two years ago, Alisha Yocum usually went to bed on the early side.

But that changed when the Frederick County Board of Education began angling to close Sabillasville Elementary School, citing dwindling enrollment and a high maintenance cost for the remote, mountaintop building.

A graduate of the school and the current president of its Parent Teacher Organization, Yocum has become the de facto face of Sabillasville’s fight. And her hundreds of hours of late-night research eventually yielded one clear solution: Transforming Sabillasville Elementary into a public charter school with a focus on agriculture and environmental science, advocates believe, would attract students from across the county. The move would eliminate the school’s enrollment woes, Yocum said.

On Wednesday, the Board of Education is set to take its final vote on the matter.

“It’s a little nerve-wracking,” Yocum said. “This charter application has consumed our lives.”

For the past two years, Yocum has led a fiercely dedicated band of volunteers in putting together the 240-page document. Often, they sacrificed weekends, pulled odd hours and shook money from their own pockets.

If approved, Sabillasville Environmental School would open next fall. As the long-awaited vote loomed, Yocum and her team were still working — writing grant applications for funds that would support the school and planning communications campaigns that would encourage families to enroll.

“I’ve put every ounce of effort I have into trying to keep a school in our community,” Yocum said. “So I could sleep at night knowing that I’ve done every possible thing I could do.”

Married to the mountaintopJustus Yocum, Alisha’s husband, grew up in Thurmont — a 10-minute drive from Sabillasville, down a winding road that forms the northeastern boundary of Catoctin Mountain Park.

From the beginning, Justus suspected he’d end up in his wife’s hometown.

“I was told when I married her that I wouldn’t get her off the mountain,” he said with a laugh.

Sure enough, a year later, the couple bought a plot of land right next to the one where Alisha’s parents lived. Now, their kids are third-generation residents.

During the charter school fight, Justus — a professional accountant — has handled all things financial. He managed a 25-tab budgetary spreadsheet, calculating costs for everything from classroom supplies to transportation to facility updates.

“It’s a pretty massive piece of work,” he said.

Gradually, a core group came together to work on the application, meeting in local churches or over Zoom during the height of the pandemic.

Barbara Doney, who has taught fourth and fifth grade at Sabillasville for more than 20 years, was responsible for mapping out the charter school’s curriculum. She largely used Common Core standards as a road map, she said.

Sabillasville Environmental would be a public school, required to meet the same benchmarks as any other tax-funded program.

But the student experience would differ in key ways, Doney said. The school would employ a classical model of education, which emphasizes history, literature and language.

That model is in high demand: Frederick Classical Charter School, the county’s only other public classical school, had a waitlist of 800 students this summer, according to Sabillasville’s charter application.

And a focus on agriculture and the environment would be woven into the school’s curriculum, Doney said. In her vision, students would spend a great deal of time learning outside — taking field trips to nearby farms or into the neighboring state park, gardening in a school greenhouse and more.

Sam Roop, president of the Frederick County Farm Bureau, spoke before the Board of Education last month in support of the school. Despite the county’s reliance on agriculture, he said, many of its children are entirely unfamiliar with how their food is produced.

“The county likes to say how agriculture is so important,” Doney said. “And this is a way for people to know that, and learn about the area they live in. Even if you live on the opposite end of the county, you still need to know how agriculture or the environment affects you, and how you affect it.”

‘Quiet kindergartener’ takes up the fightSabillasville’s location — nestled in rolling farmland on Catoctin Mountain — makes it the perfect school to introduce a new type of environmental education to the county’s students, Alisha and Justus Yocum said.

They’re hopeful unique curriculum offerings will attract students from outside their tiny community. A large portion of the Sabillasville’s land is zoned for agricultural preservation, which rules out any new residential development and curtails population growth.

She recommended the board approve the charter but only if the Yocums and the school’s other founding members could prove by Dec. 1, 2021, that they had 161 students committed for the 2022-23 school year.

That’s a steep figure, Alisha Yocum said. All of Sabillasville Elementary’s roughly 70 current students would be guaranteed a spot in the new charter school, leaving about 90 slots to be filled.

In a recent survey, more than 60 students who didn’t currently attend the school said they were ready to commit, Yocum said.

“I’m excited,” Yocum said. “But I’m also worried because you’ve put all this time and effort into something, and you never know how it’s gonna go.”

Two years ago, Yocum and her team knew next to nothing about charter schools, she said. They’re governed by complex state laws, and Yocum said she was warned from the start that trying to launch one would be an “emotional roller coaster.”

Some days, Yocum said, consumed with frustration, she questioned why she was pouring so much effort into the project. The board voted to close the school in November 2020, arguing its enrollment numbers were too low, its maintenance costs too high and its location too remote to justify continuing to operate it.

Then, the board reversed the decision in March of this year, acknowledging it hadn’t allowed sufficient time for the community to give input or propose solutions.

Confusion and anger has swirled in the town as the fate of the school has swung back and forth. Sometimes, Yocum said, “you feel like the whole community is on your shoulders.”

But other days, when the support from her neighbors overwhelmed her, the reasons for her sacrifices seemed perfectly clear.

“I still talk to my kindergarten teacher even to this day,” Yocum said. “She’s sent me notes of encouragement as well throughout this whole process. Like, ‘I can’t believe my quiet little kindergartner is now fighting the Board of Education and trying to start a charter school.’”

Tim Shell, who attends church in Sabillasville and wrote a grant application for the charter school, has lived in the area for just a year. In that time, he said, he’s become a “cheerleader” for the cause — largely due to the passion he’s seen from the community.

“They’ve weathered a lot of ups and downs,” he said. “You see courage, you see perseverance and struggling against what may have looked like big odds.”

It was a difficult, exhausting task, Shell acknowledged.

“But they’ve just done their homework,” he said. “And so they’ve gotten this far.”

The vote will take place during the regular meeting of the Board of Education, which begins at 6 p.m. For more information, go to fcps.org.

It's really simple. If you support keeping the school open as part of the FCPS system, you are pushing for the county to spend the tax dollars it takes from it's taxpayers less efficiently and less effectively than if it closed the school or let someone operate a private or charter school there.

I too lay sleepless at night, tossing to and fro, wondering if Sabillasville Elementary School will close or become a charter school. Then I rise to wondering if we get the remaining hostages out of Afghanistan.

They are effectively hostages. The Taliban will not likely allow then out for nothing. The three that escaped by an overland route reportedly had to pay money at each checkpoint. I heard the report but can't find anything in print (I suspect for a reason). However despite not finding the report in print there is this "The Washington Post reported last week that Mullin had threatened US Embassy staff in Tajikistan, outraged that they would not assist him in carrying a huge amount of money through the country as he attempted to travel to Afghanistan for an unauthorized evacuation effort."

What do you suspect the reason to be?

The Taliban wants money and I suspect the U.S. government doesn't want to advertise that it will pay huge sums of money to get people out.