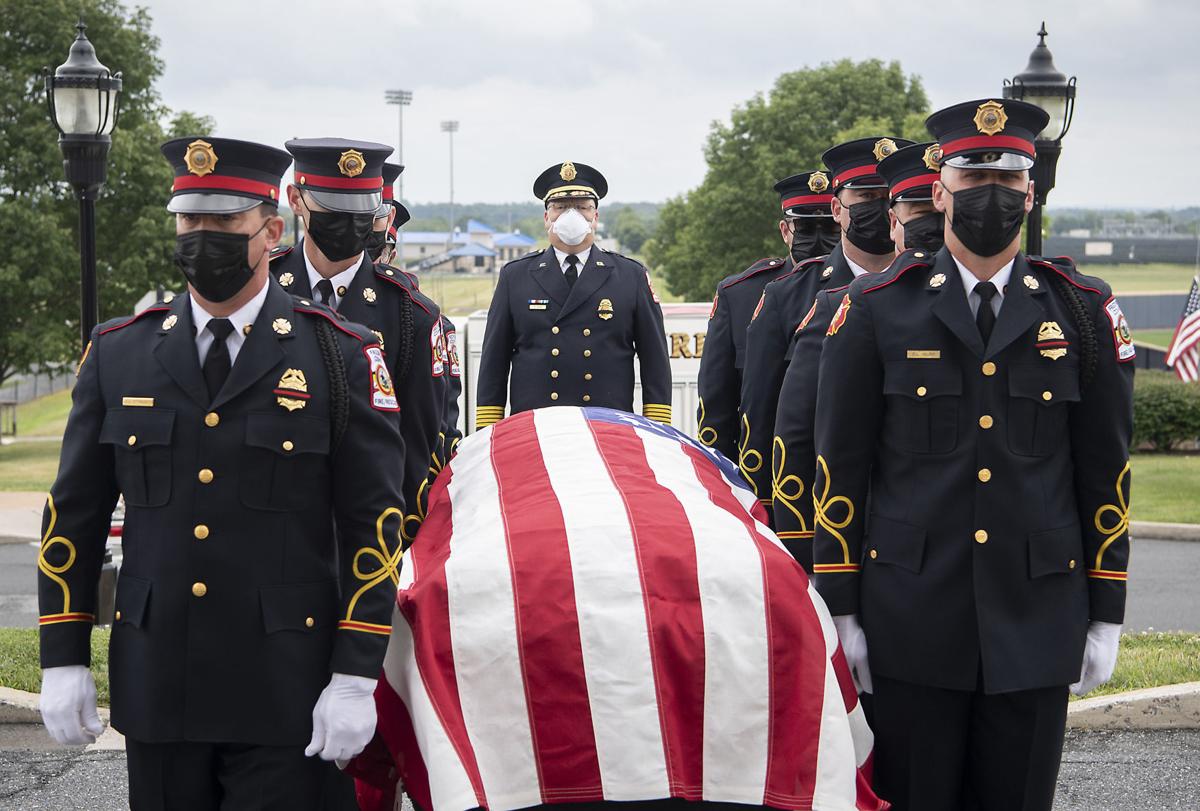 Frederick County Division of Fire and Rescue Services Chief Tom Coe, center, leads a detail of county fire service honor guard members as they transport the flag-draped casket containing Battalion Chief Joshua Laird into the Knott Arena at Mount St. Mary's University Monday afternoon. A procession of fire and police apparatus escorted the casket from Laird’s hometown of Fairfield, Pa. Hundreds of fire service members and others waited in line to pay their respects to the family. The funeral service will be held Tuesday. Laird, 46, died Wednesday from injuries he sustained battling a two-alarm house fire in Ijamsville. 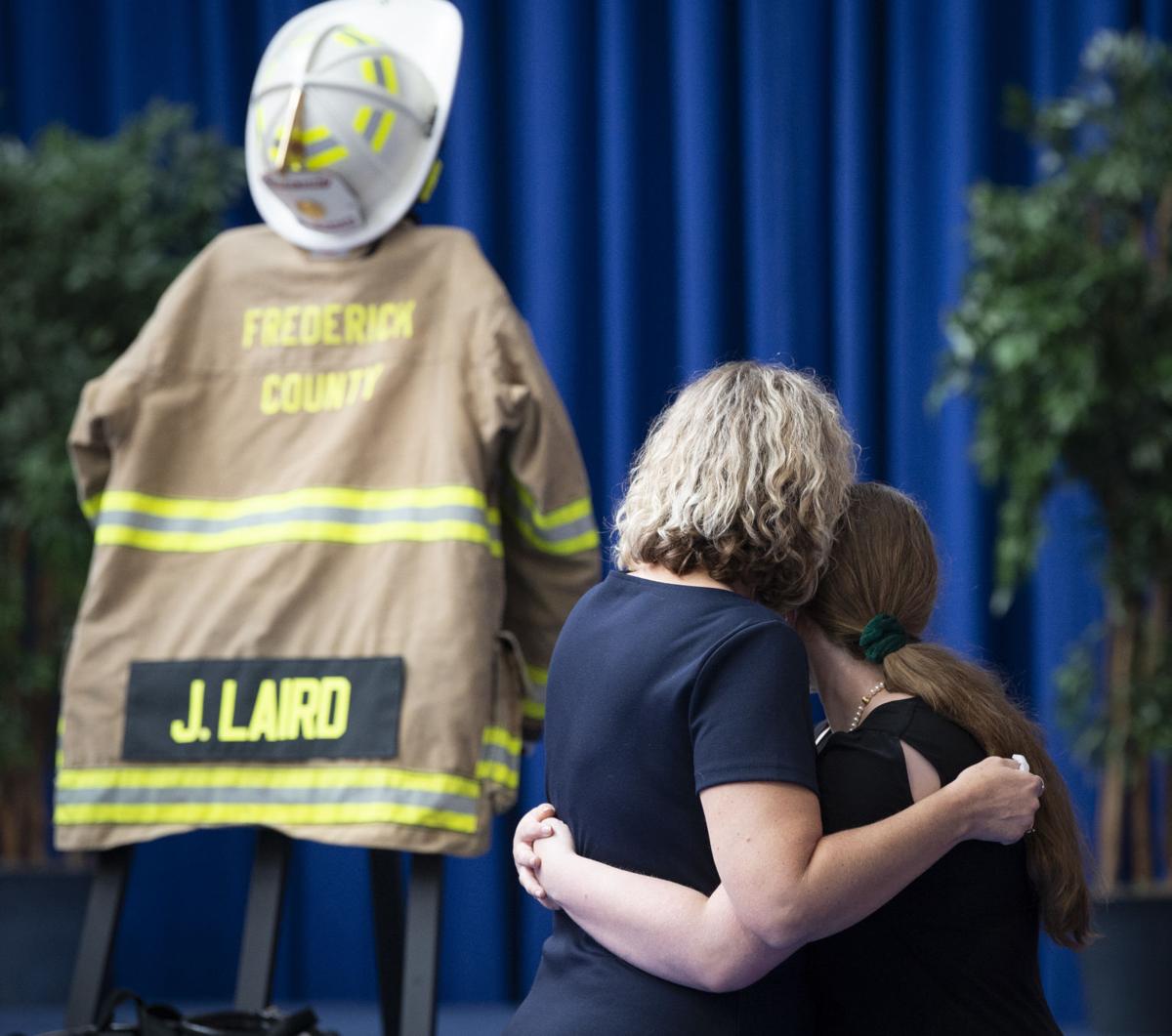 Sara Laird, the widow of fallen firefighter Battalion Chief Joshua Laird, and her daughter Erin, 14, share a hug and moment together just before the start of the visitation Monday afternoon at Mount St. Mary's University. 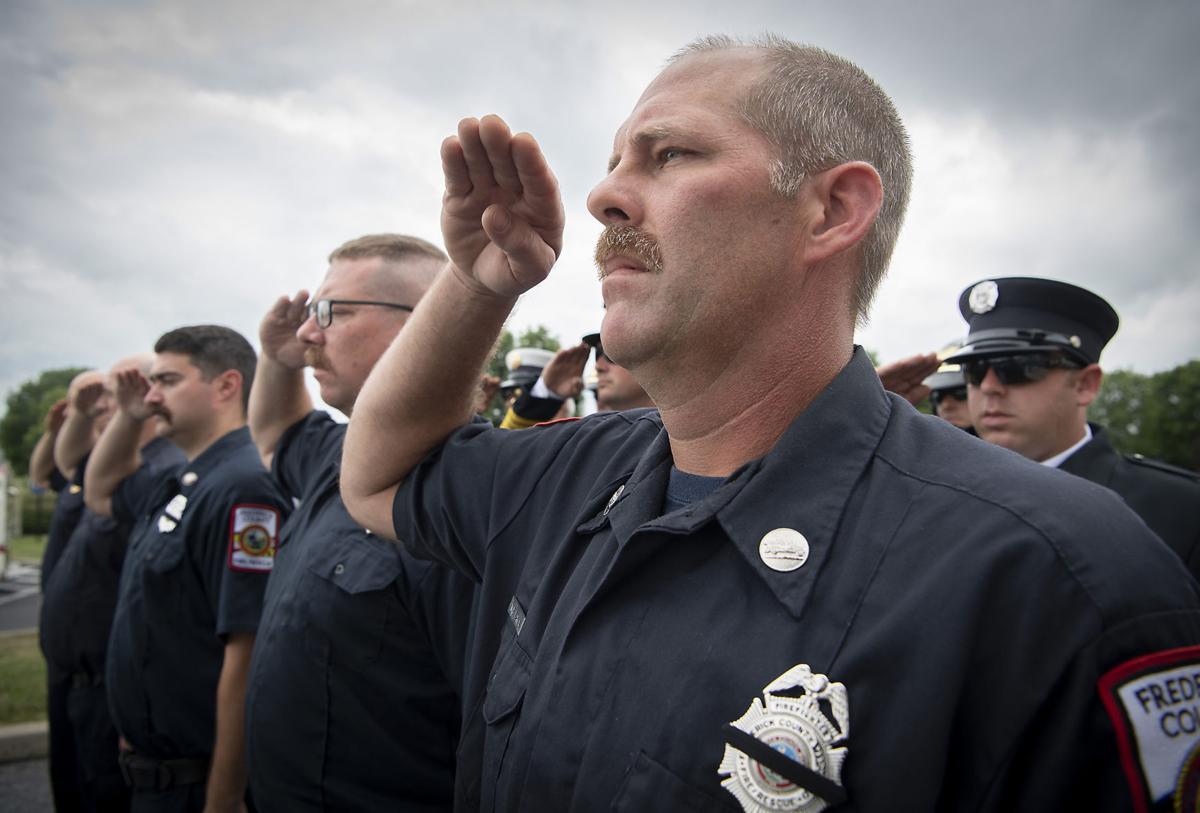 Members of the Frederick County Division of Fire and Rescue Services salute as the casket carrying Battalion Chief Joshua Laird is moved into Knott Arena at Mount St. Mary’s University Monday afternoon. A procession of fire and police apparatus escorted the casket from Laird’s hometown of Fairfield, Pa.

Hundreds of visitors waiting to honor a fallen hero in Emmitsburg Monday watched, through photos, as Battalion Chief Joshua Laird grew up before their eyes.

A young, bright-eyed boy morphed into a man in uniform. A husband became a father. The pictures in the slideshow showcased snippets of family outings, Laird’s daughters and wife smiling by his side. Some depicted him with a drink in his hand and a grin on his face. A few portrayed him in silly masks or outfits.

Laird, 46, died Aug. 11 from injuries he sustained battling a two-alarm house fire in Ijamsville. He served 21 years in the Frederick County Division of Fire and Rescue Services.

Laird's body was returned home to Pennsylvania over the weekend. At the front of the procession to bring Laird home Saturday was Cpl. Amber Frantz.

Frantz met Laird years ago, early in her career with the Frederick County Sheriff’s Office, when Laird was stationed in New Market with the fire service.

“I would stop by the station often and we’d always just chat, all the guys, they welcomed me with open arms,” she said outside Knott Arena.

On Monday, Frantz served as the honor guard team leader for the FCSO. Part of the honor guard’s duties included watching over the casket, greeting visitors at the door and doing anything else they could to support DFRS, she said.

Firefighters and police often work together, but the way Frantz tells it, they build friendships outside the workplace too. And when law enforcement suffers a loss, in the line of duty or not, she knows firefighters are there for them.

“We’re all one family,” Frantz said.

Inside the arena, flowers every color of the rainbow lined the first row of bleachers leading up to the Laird family and a casket draped in the American flag. Turnout gear bearing Laird’s name was on display. Family members grasped hands and hugged each other tightly.

As the bereaved passed by where Laird rested, those in uniform stopped to salute him.

Among the people watching over him was Carroll Manor firefighter Andrew Ayers.

He didn’t know Laird, but when a call went out for casket watch volunteers, Ayers was one of those who stepped up.

“It's without a doubt that he's done a great amount of things for this county, and I've heard nothing but amazing things about him as a person, both professionally and personally,” Ayers said outside the arena. “I just wanted to help out in any other way that I could … just a way of giving back to Battalion Chief Laird and his family.”

While adults and older children paid their respects, a small group of volunteers watched over youngsters playing ball and coloring.

Apryl Huster traveled from Ocean City to help babysit. She previously served two years on the Fairfield Area School Board in Adams County, Pennsylvania, with Laird, who was an active member of the board at the time of his death.

“For me, being in Ocean City so far away from where it all happened, the biggest thing that touched me was seeing right there, you know, what — four hours away from where Josh was — all the flags down,” Huster said outside the arena.

“It was special because I knew that flag was down for my friend, and my friend had so many people that loved him, so it just made it feel special,” Huster said. “That was Josh, he was a special, one-of-a-kind guy.”

The funeral service is scheduled for 1 p.m. Tuesday, Aug. 17, at the Mount St. Mary’s University PNC Sports Complex. There will not be a graveside service following the funeral.

The funeral will be live-streamed on FCG TV and at livestream.com/msmu/events/9801929.

When the next class of rookies enters the Frederick County fire and rescue service, there’s a good chance they’ll hear the story of Battalion …