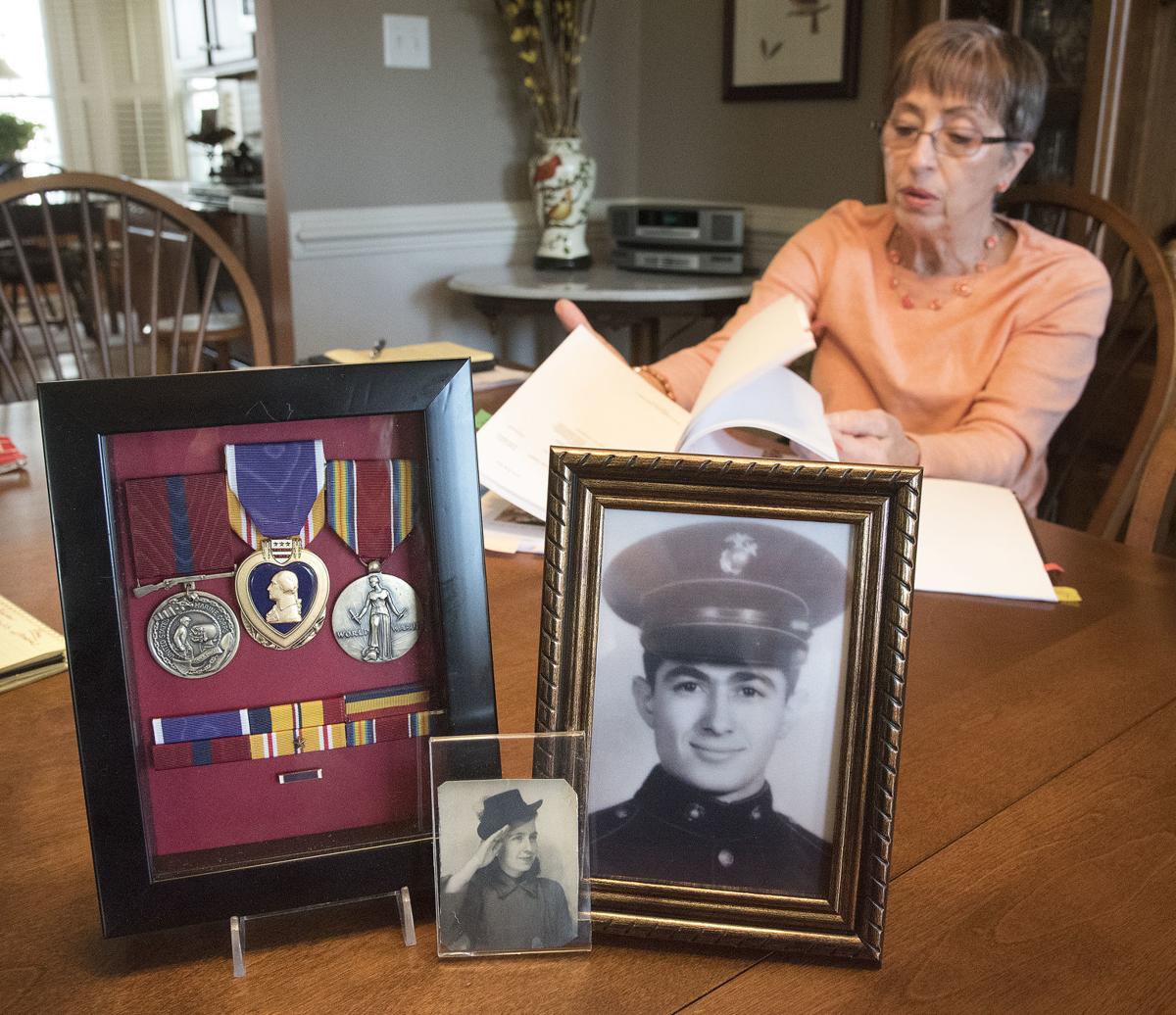 Diane Mazur, the only living relative of Pfc. Manuel Menendez, a Marine who was killed in the Battle of Tarawa in World War II, and a photograph of Menendez along with a photograph of his sister Lucille Boris and some of his medals. 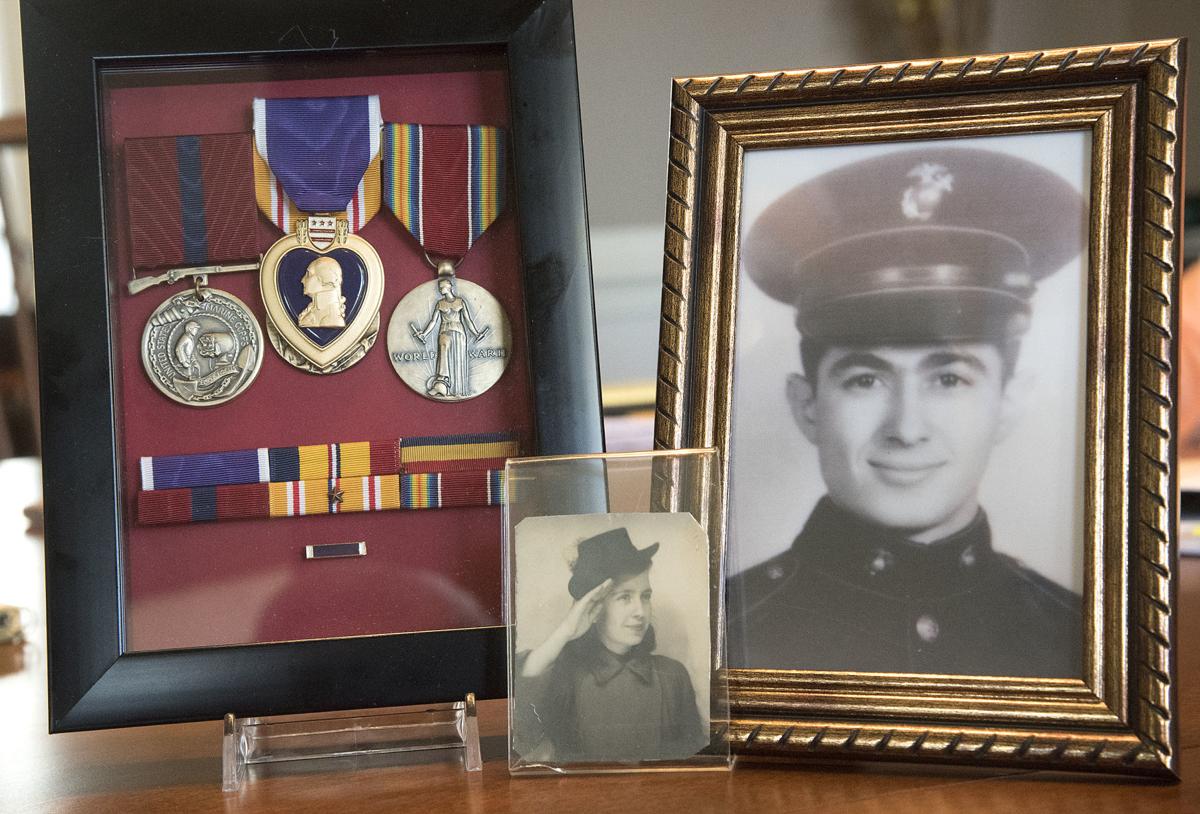 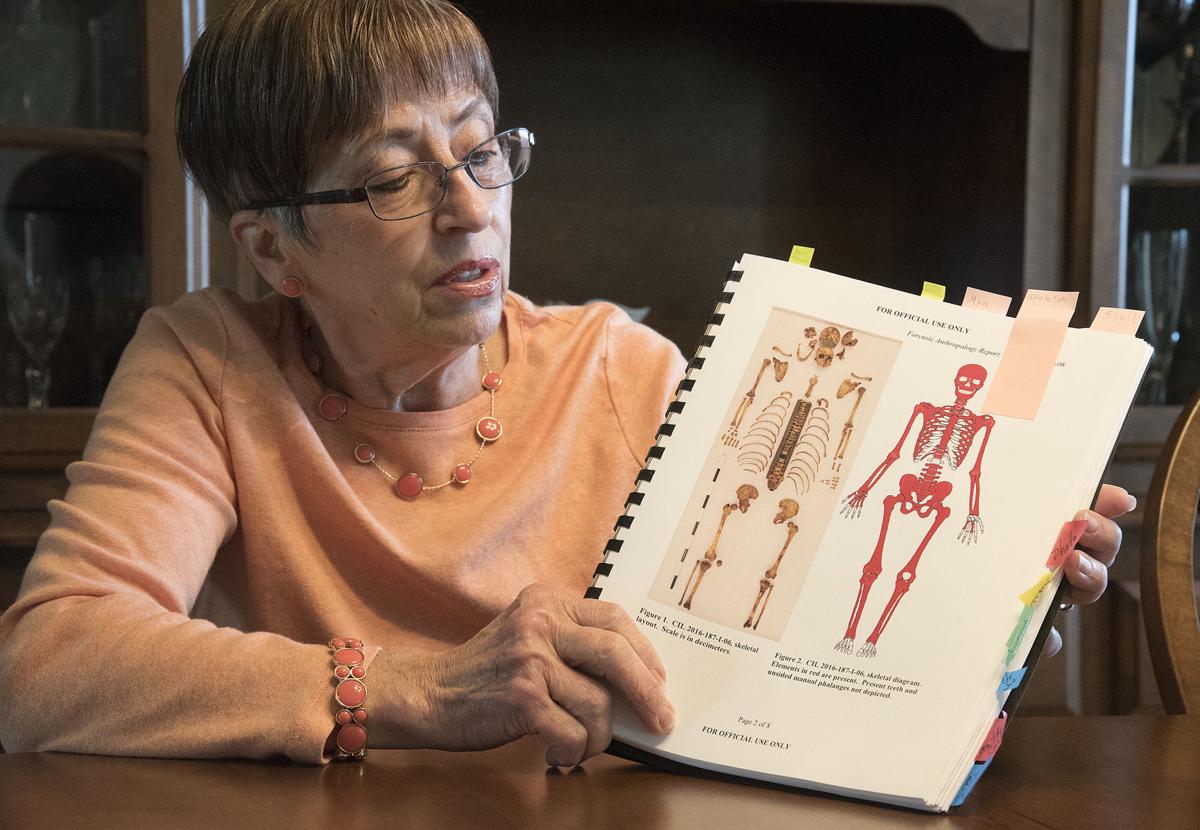 Diane Mazur, the only living relative of Pfc. Manuel Menendez, a Marine who was killed in the Battle of Tarawa in World War II, with a book detailing the remains of Menendez that were finally recovered last year.

Diane Mazur, the only living relative of Pfc. Manuel Menendez, a Marine who was killed in the Battle of Tarawa in World War II, and a photograph of Menendez along with a photograph of his sister Lucille Boris and some of his medals.

Diane Mazur, the only living relative of Pfc. Manuel Menendez, a Marine who was killed in the Battle of Tarawa in World War II, with a book detailing the remains of Menendez that were finally recovered last year.

At 72, Diane Mazur became the gatekeeper of a story about a man she never met.

The Middletown resident had been told about her uncle Manuel Menendez, throughout her childhood in Elizabeth, New Jersey. Her mother and grandmother always kept a picture of the 20-year-old Marine, and Mazur could see her own mother’s face outlined in his smile and dark eyes.

That picture, though, was Mazur’s only reference point for her uncle. Two years before she was born, and two days before Christmas 1943, the family received a telegram from Lt. Gen. Thomas Holcomb, a commandant of the U.S. Marine Corps in World War II.

“Deeply regret to inform you that your son, Private First Class Manuel Menendez, was killed in action in the performance of his duty and in the service of his country,” the telegram read. “To prevent possible aid to our enemies, please do not divulge the name of his ship or station.”

And later on, “Please accept my heartfelt sympathy.”

The Battle of Tarawa, in which Menendez was killed, was a bloody victory for U.S. forces against Japanese defenses on the Pacific islands of Betio and Makin. The U.S. won control of Betio by Nov. 23, 1943, but at great personal cost.

The battle resulted in more than 3,000 casualties, including 1,100 to 1,200 killed or missing, according to a report from the Defense POW/MIA Accounting Agency (DPAA).

Menendez was among those unidentified casualties. Like his siblings and Spanish mother, the young Marine was diminutive in frame; his registration papers list him as 5 feet 3 inches tall and weighing 116 pounds. Mazur can picture him going into the Battle of Tarawa as part of the second offensive wave, weighed down by equipment and stumbling onto shore.

“After what I learned from the Marines, I can actually envision him having to get out of the boat,” Mazur said. “It was low tide and he’s putting on all that heavy equipment, and the Japanese are firing at him as he’s trying to go to the shore.

“I’m thinking, ‘How the heck did he do that?’” she continued. “He’s carrying a gun and probably 90 pounds of equipment with him, and the Japanese are firing at him while he’s walking in the water on [a] coral reef. And he’s wet and he’s got his heavy boots, and it’s hot. He didn’t even stand a chance.”

For years, the family was told that his body had been washed out to sea, Mazur said. Her mother, Lucille, wrote five letters to the Marines in the months following her brother’s death, pleading for more information on how he died and what became of his body. But in the chaos of war, the agency had few answers.

American troops had hastily buried many of the dead in temporary cemeteries on the island of Betio, but there was little coordinated effort to chart and survey every resting place, said Sgt. Kristen Duus, a spokeswoman for the DPAA.

By May 1946, the American Graves Registration Service had reinterred at least 532 sets of remains in Lone Palm Cemetery, a more permanent burial spot on the west end of the island.

According to a letter sent to Lucille from Gen. Alexander Vandegrift, a commander with the Marine Corps, there was a marker constructed for Menendez at one of the temporary grave sites. But when American forces exhumed the plot, nothing was found.

“In some instances, well-meaning persons had erected individual commemorative markers in memory of our heroic dead,” Vandegrift wrote. “Since the American Graves Registration Service has been unable to locate the remains of Private First Class Menendez, it must be assumed that his body was among the unidentified dead and that a cross was erected in his honored memory rather than actually as a marker identifying the location of his grave.”

Mazur said her family rarely discussed her uncle’s death. But she could tell how deeply her mother and grandmother felt his loss. Of the seven siblings in the family, including four sons who also served in the armed forces, Menendez was the only one who never returned home from combat. He and Lucille were the closest in age, and Mazur’s mother’s letters expressed how badly she needed closure after his death, she said.

Her grandmother also showed her grief in subtle ways. A tiny woman who immigrated from Spain in the 1800s, Elena Menendez never fully mastered the English language and was never able to write her own letters asking about her son. But sometimes, Mazur would catch her grandmother looking at Manuel’s picture with tears in her eyes.

“It was just a missing piece for my family,” she said. “But they never talked about it. And really, what could they say? He was lost at sea. They didn’t know the whole story about what actually happened to him.”

Mazur never questioned the official story regarding her uncle’s body. But in 2016, she received an out-of-the-blue call from the DPAA, asking for a sample of DNA to confirm the identity of a set of remains that the agency suspected were Menendez’s.

Like hundreds of his fellow Marines, the young man’s burial spot was never accurately recorded when his body was buried in the days after the Battle of Tarawa, Duus said. While his remains were left anonymous, they were ultimately uncovered and reburied in Lone Palm Cemetery by the Graves Registration Service, identified only by the serial number X-168.

In the summer and fall of 1946, the agency began to exhume the dead at Lone Palm and transfer them to the National Memorial Cemetery of the Pacific in Honolulu. For the third time, Menendez’s unidentified remains were reburied in a new cemetery and remained there until 2016, when Assistant Secretary of Defense Todd A. Weiler issued a memo calling for the identification of unknown dead from the Battle of Tarawa.

On Oct. 3, 2016, Menendez’s skeleton was sent to a forensic lab for analysis, Duus said. Forensic anthropologists concluded that the remains belonged to a man between the ages of 18 and 23 of short stature with two impacted teeth on the upper left and right side of the jawbone. The same two impacted teeth appeared in the exact positions on Menendez’s military dental records.

A DNA sample from a surviving nephew on the paternal side wasn’t a match, Mazur said. But hers helped to identify the remains with 100 percent accuracy. Between the height and the teeth and the mitochondrial DNA sequencing, the DPAA had identified a set of remains that had stayed anonymous for the past 74 years. And Mazur, who never met her uncle, suddenly found herself responsible for planning the memorial her family always felt he deserved.

“I just felt this connection when I heard the story,” Mazur said. “I feel as though I’m doing this not only for my uncle, who not only lost his life but has been interred so many times, but also for my grandmother, my mother, and for my aunts and uncles.”

On Thursday, Menendez’s remains are expected to be interred, for the final time, at Arlington National Cemetery. The Marine will receive full military honors, including a marching band and rifle salute, Mazur said.

Before the ceremony, she plans to pass out a bulletin with details on her uncle and the Battle of Tarawa. Particularly comforting is a quote by Fleet Adm. Chester Nimitz, a naval commander in the Pacific, who defended the bloody battle by saying that “the capture of Tarawa knocked down the front door to the Japanese defenses in the Central Pacific.”

For Mazur, it’s a poignant reminder of her uncle’s contribution in World War II, and a death that had long remained unacknowledged.

“He really didn’t have a life, if you think about it,” she said. “Dying so young like that, I feel like his life was cut short. But he died so that others could be free and happy today.”

At 5' 3" and 116 lbs. it seems odd to me that he qualified physically for the military.

It seems odd to me that a young man 6’ 3” 180lbs who was the son of immigrants wouldn’t defend America when asked in Vietnam.

An uncle of mine was hit riding a bicycle when he was 11, knocked unconscious for four hours. He tried to enlist three times, then in 1944 they drafted and took him. He was in Patton's Third Army, tank corp. He was at Bastogne, the Battle of the Bulge and across the Rhine into Germany, 168 days of front line combat. In '44 if you breathed, they took you.

A first cousin was in the Marine Corp and killed on Saipan. Another uncle was shell shocked and caught malaria on Guadalcanal. It was all out war!

“His Lord said to him, Well done, you good and faithful servant…” Matthew 25:21.
PFC Manuel Menendez was submitted as a "Probable Match" to Punchbowl Cemetery Unknown X-168 on August 5, 2011 in an official Investigative Report submitted by Chief Rick Stone while a member of the Department of Defense. The Chief Rick Stone and Family Charitable Foundation's ongoing investigation listed him as a “Most Likely Match” to X-168. The Defense POW/MIA Accounting Agency finally decided to act on the official recommendations for disinterment and identification of the Punchbowl Unknowns from Tarawa. Unknown X-168 has now been confirmed as PFC Manuel Menendez. Welcome home Marine! We share the joy of your family in your return to Arlington! God Bless you and thanks to ALL who never forgot you and your service to our country!

The Middletown Valley should honor all veterans including black veterans

RIP, Private First Class Manuel Menendez-
May this be your final resting place.
Thank you for your ultimate sacrifice.

They truly were The Greatest Generation.

Yes!! Those fudging mellenials have to go and screw up this country too!