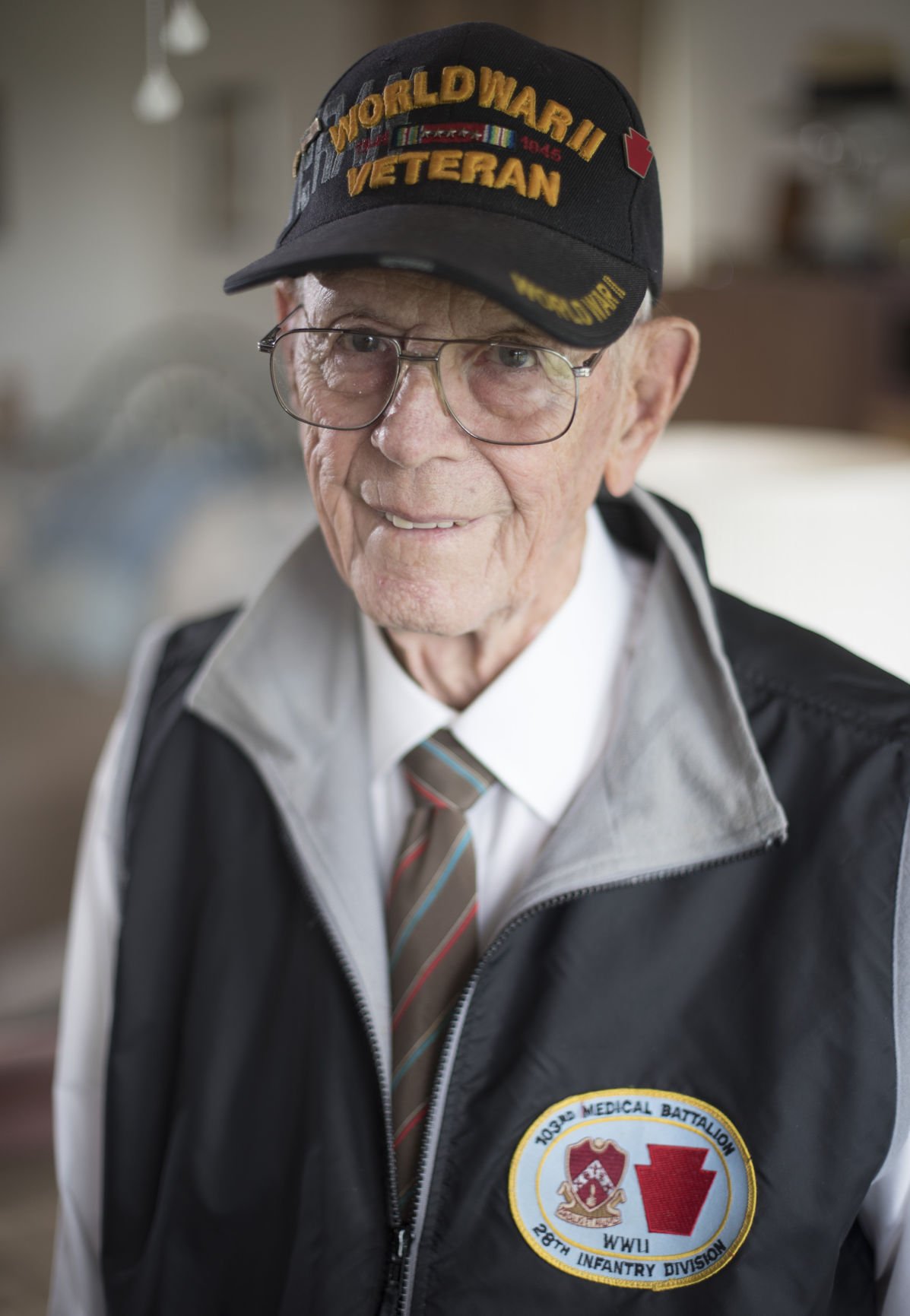 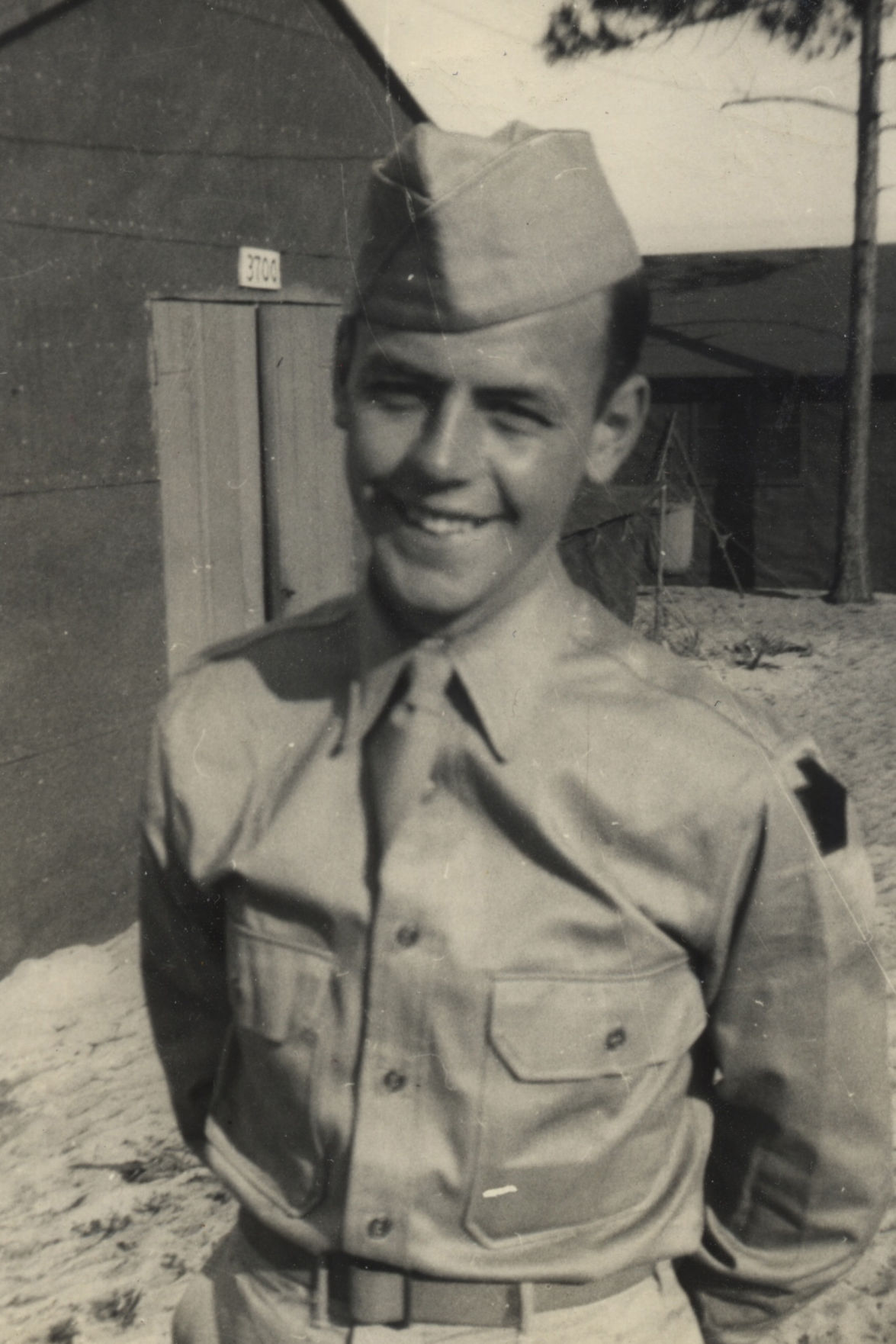 Carl Molter Jr. stalled his jeep turning around on a narrow Belgian road just outside the city of Bastogne. It was the early days of the Battle of the Bulge, and Molter had inadvertently driven into a field where German and Allied troops were about to clash.

Molter had made it through several major battles since getting drafted in 1942. As a combat medic, he had only a little distance from the front line. He spent most of the war in ambulances and aid stations.

Now, an assignment to pick up an infirm officer from a basement hospital in a besieged city had him heading straight into a battle.

“We couldn’t go any further there,” Molter said. “All hell is breaking loose, and they’re shooting everything. ... So as I’m backing around there, I stall the jeep. I’m so scared. So I got it going. Just as I got it going this damn — a shell came out of [an 88 mm] tank — [and] went into the dirt about 3 feet from the jeep. It went in ... and made a hole. We could just see the tail of the bomb in there. ...

Molter, 95, chalks this up as one of five lucky breaks he got during his Army service that kept him alive through World War II.

Molter was referred for combat medic service after being drafted into the 28th infantry. Left-handed, he thinks he was spared from the front lines because he couldn’t fire a semi-automatic M1 rifle without burning his face when the hot casings ejected.

Still, as a combat medic, he was never far from the fighting, and the human damage it wrought.

“We handled one hell of a lot of poor guys blown to hell,” Molter said. “As far as in the combat — I had a lot, a lot of bad situations. I learned a lot about what your body is made of. I’ve seen a lot of it.”

For the first part of his service, Molter drove an ambulance with his wife’s name, Betty, painted across the door and handled wounded soldiers across the front. He eventually took a different job to earn extra money to send home to his wife, he said. This put him in a jeep driving between aid stations. During the Battle of the Bulge, he drove upon his former ambulance — abandoned.

Battle of the Bulge

Also known as the Ardennes Counteroffensive, the battle started on Dec. 16, 1944 as a final attempt by the Germans to turn the fighting on the Western Front in their favor.

The Germans caught the Allied Forces off guard with more than 200,000 soldiers and 1,000 tanks attacking along a 75-mile stretch in the densely wooded Ardennes forest in parts of Luxembourg, Belgium and France.

For more than four weeks the Germans tried to cut through the Allied Forces line to shut down their use of the port at Antwerp, Belgium.

Allied forces suffered more than 75,000 casualties, including 8,607 Americans killed, before pushing back the German advance. More than 12,600 German soldiers were killed.

“There was my ambulance there in the field all tore apart. In the war, the first thing you did if you got captured in a tank, anything, each driver of a vehicle had a bomb in each vehicle. We’d drop that in on the motor. They told us to pull the stem and run. That would blow the motor so they couldn’t move the vehicle. So there is my ambulance with my door. I can still see ‘Betty’ as I’m moving up through this maze.”

The medic who took over his ambulance was captured, Molter said. He spent a year in a prisoner-of-war camp. They met again at a division reunion after the war.

“He died about three years later,” Molter said. “He wouldn’t ever talk about the war. ... He died quick because he was so bad. He hardly could talk to me. The other guy, my assistant driver, he didn’t make it, he died in captivity.”

Molter applied for another job, with a unit further from the front line, transporting the division’s records and mail, he said. A friend who could type got the position instead.

“Later on, as the [Battle of the Bulge] came along, the Germans were nearly surrounding thousands of us,” Molter said. “He was given a gun and put on the line trying to save this town. He got killed.”

Molter survived after seeing so many others killed and wounded. He returned safely to Betty. His job at the Endicott Johnson Shoe Co. was waiting for him. He later traveled extensively and visited the graves of his comrades in World War II cemeteries.

“I’ve traveled all over the world, and I’ve been to just about every [U.S. military] cemetery I could find,” Molter said. “I always carried [names of friends from the Army] with me. ... I found at least 10 of my guys. ... I’d find his grave and I take a picture of it.”

'I was a soldier. That's what I wanted to do': WWII marked start of New Windsor man's military career