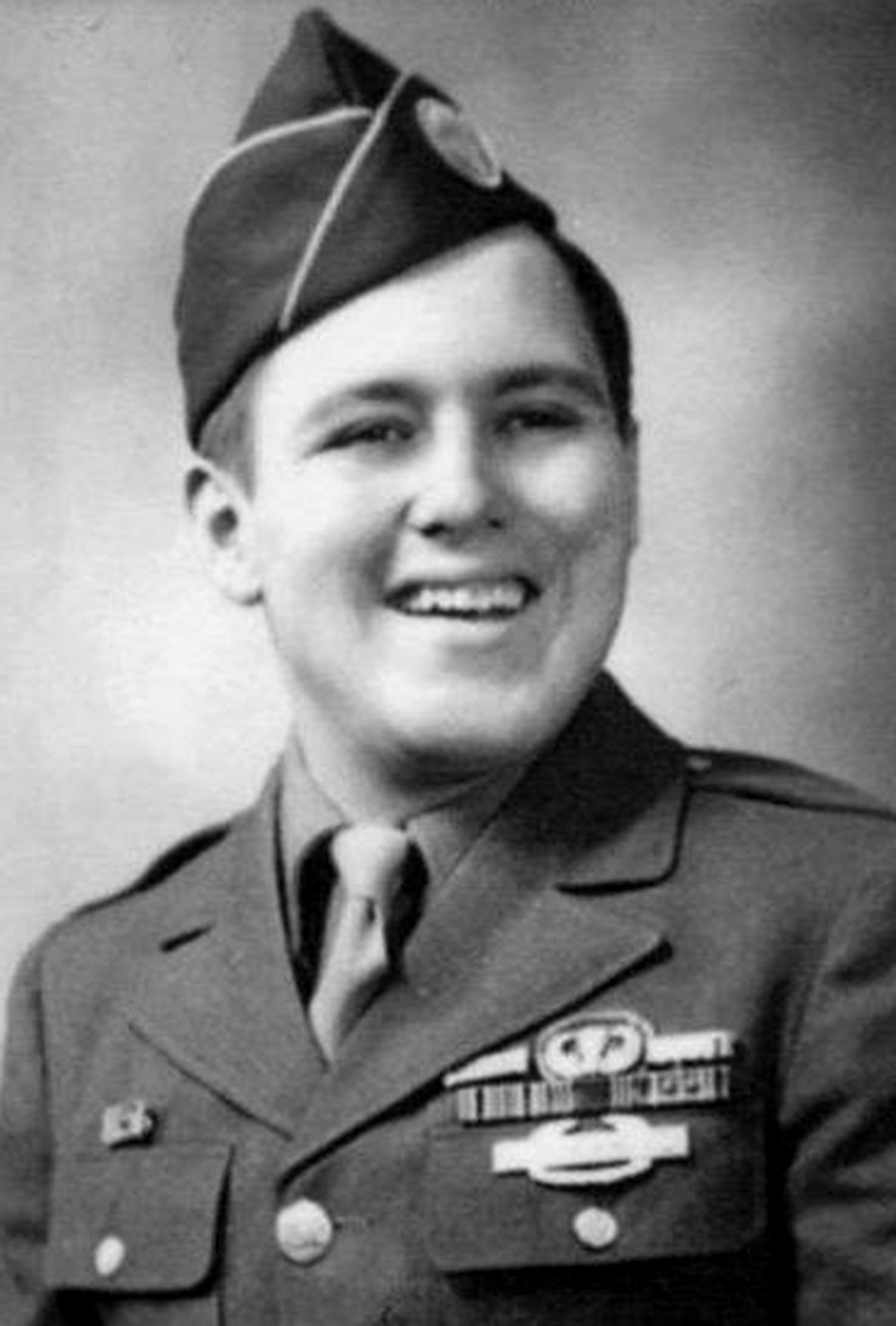 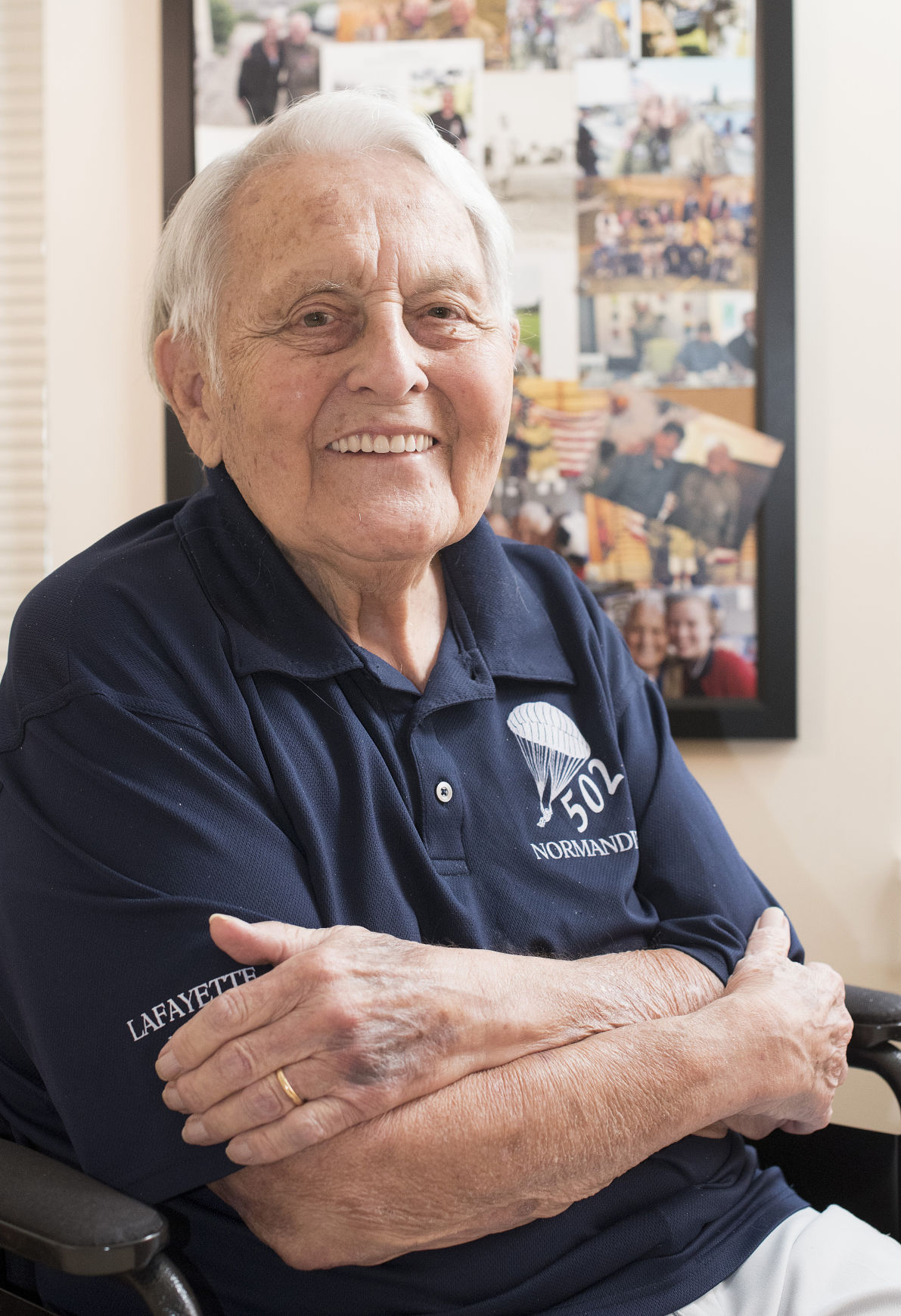 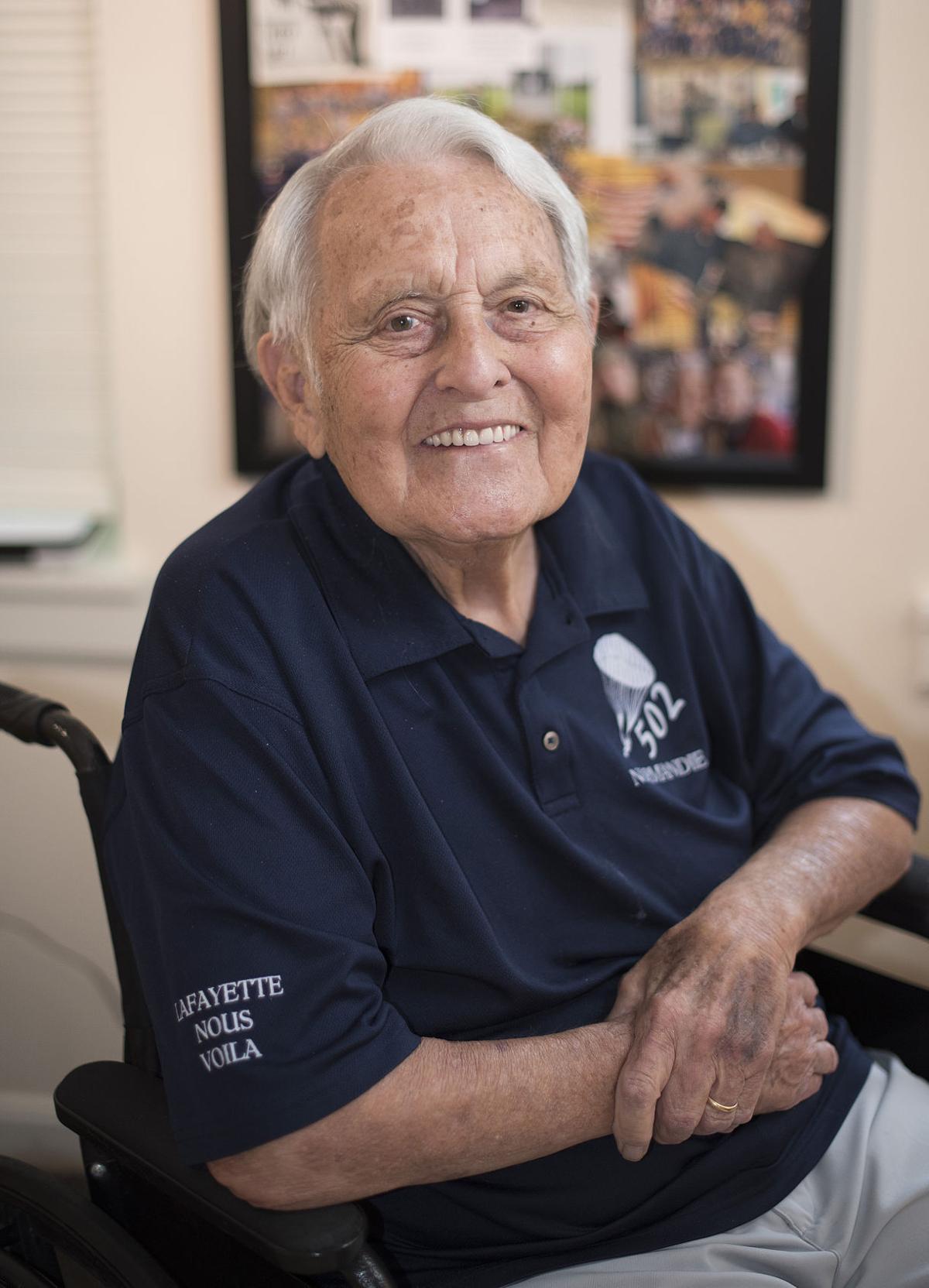 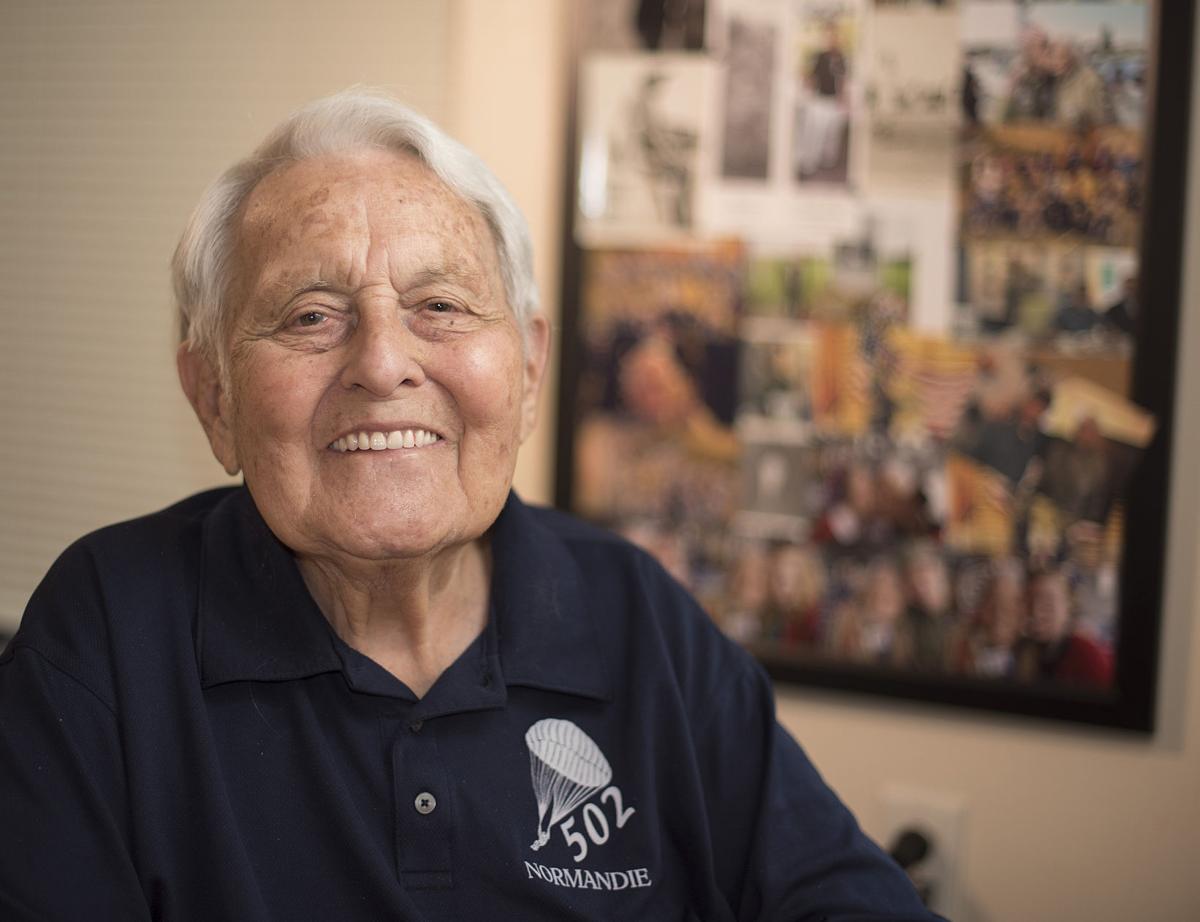 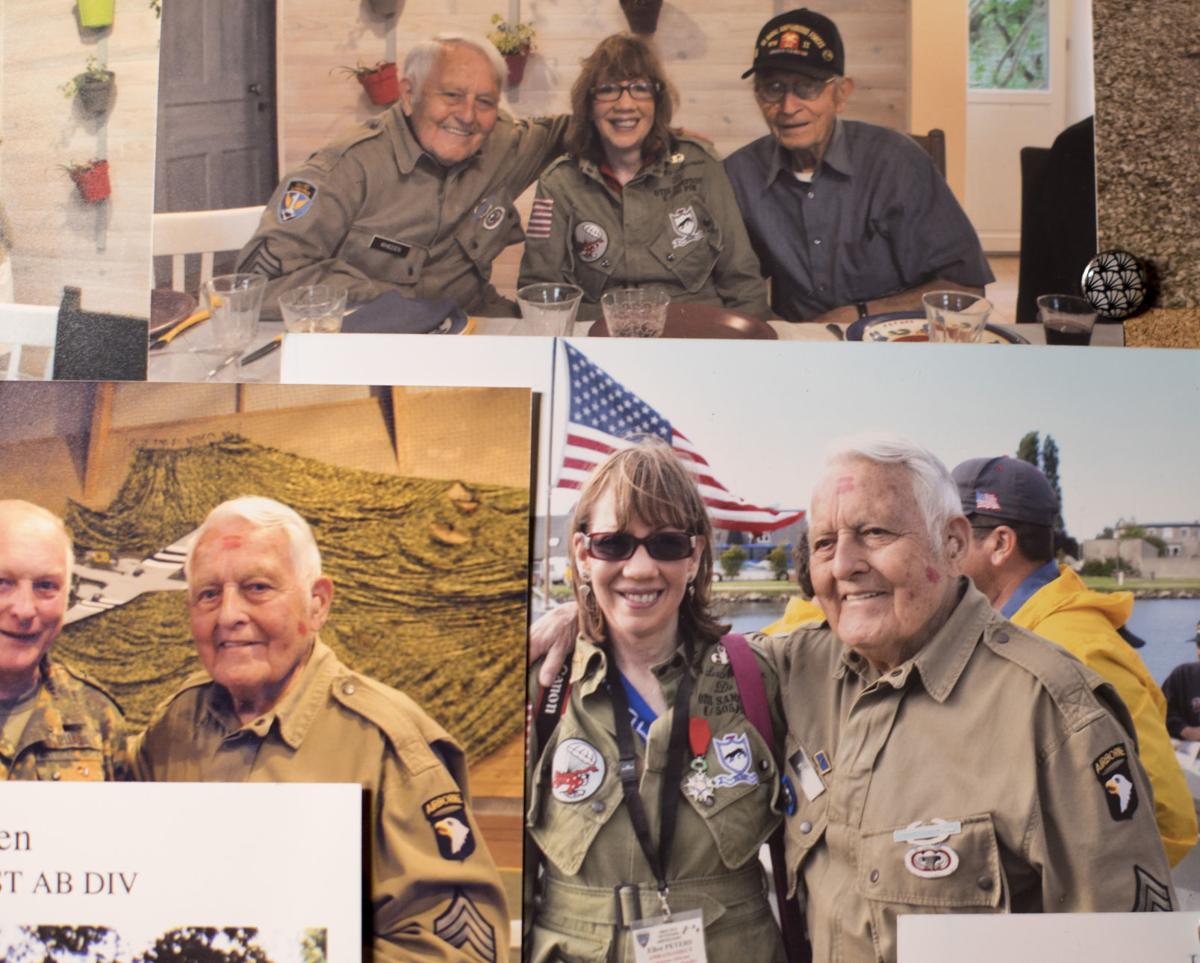 A collage of photos from World War II veteran Guy Whidden’s collection. In the years since Whidden jumped into D-Day as a paratrooper, he has written a book about his experiences and shared his story with thousands on social media. In 1994, he joined others for a “re-jump” into Normandy.

The Frederick resident fought in the 502nd Parachute Infantry Regiment of the Army’s 101st Airborne Division during WWII. He made his last jump at age 73, with about 40 other paratroopers on the 50th anniversary of D-Day, in 1994. He had planned to jump over the Netherlands just last year, but that was called off due to the weather.

“When you’re jumping from that altitude, the proximity of the ground is so far away, you’re not thinking much of it,” Whidden said. “When you’re way up there, it’s a different thing all together.”

He made 15 jumps with his unit, he said, and fewer than 20 jumps throughout his lifetime.

After the attack on Pearl Harbor, Whidden enlisted out of high school in 1941. Recruiters said Whidden would be trained as a pilot — the job he wanted — but he was sent to an infantry unit. Whidden then saw joining the airborne as a way out.

He trained at Fort Benning, Georgia, where he later became an instructor.

Whidden’s squad was among those who jumped into Normandy on D-Day. He landed in the town of Sainte-Mère-Église.

“We went up 1,500 feet and then it was like a roller coaster all the way into where we dropped,” he said.

The men in his plane had voted to keep the aircraft’s door closed so they could smoke cigarettes without the light attracting the attention of German soldiers. That made for unpleasant conditions, according to Whidden, because some of the men had urinated in their pants or vomited during the flight. There was no fresh air to help the smell.

“It was like the Fourth of July,” Whidden said.

It took several hours before he found his own squad, so he stayed with the 82nd for several hours, Whidden said.

The German units were in front of and behind him.

His group’s mission was to take out German guns along a coastal road to allow troops to pass safely, but it turned out the guns had been destroyed the night before.

After another jump, on Sept. 16, 1944, in the Netherlands, Whidden found himself with at German Luger stuck to his head.

Mortars were falling down on either side of the road, Whidden recounted. He slid into a ditch for safety, but a German coming from the other direction, approached him and pinned him in the channel.

“I was really pinned down, with him on top and the gun pressing hard on me,” Whidden said.

Whidden tried to reach for his trench knife but couldn’t.

The officer stared at Whidden for a while and then, inexplicably, the German surrendered the pistol to him.

Whidden guessed that maybe he reminded the officer of one of his own children, so he couldn’t go through with killing him. But ultimately, Whidden attributed the act of mercy to divine intervention. He survived that experience and kept the Luger as a war souvenir.

Later on, an exploding mortar broke his leg and killed the rest of his squad.

Soldiers brought him to a hospital in Eindhoven and then moved him into Belgium to recover from his compound fracture. After some complications — the leg was infected and doctors wanted to amputate — he eventually healed and returned to the U.S. by boat from England.

“I didn’t like the idea of going by plane again. I thought my luck would run out,” he said.

Guy Whidden has had his hair styled into a mohawk before — if only for a few hours.