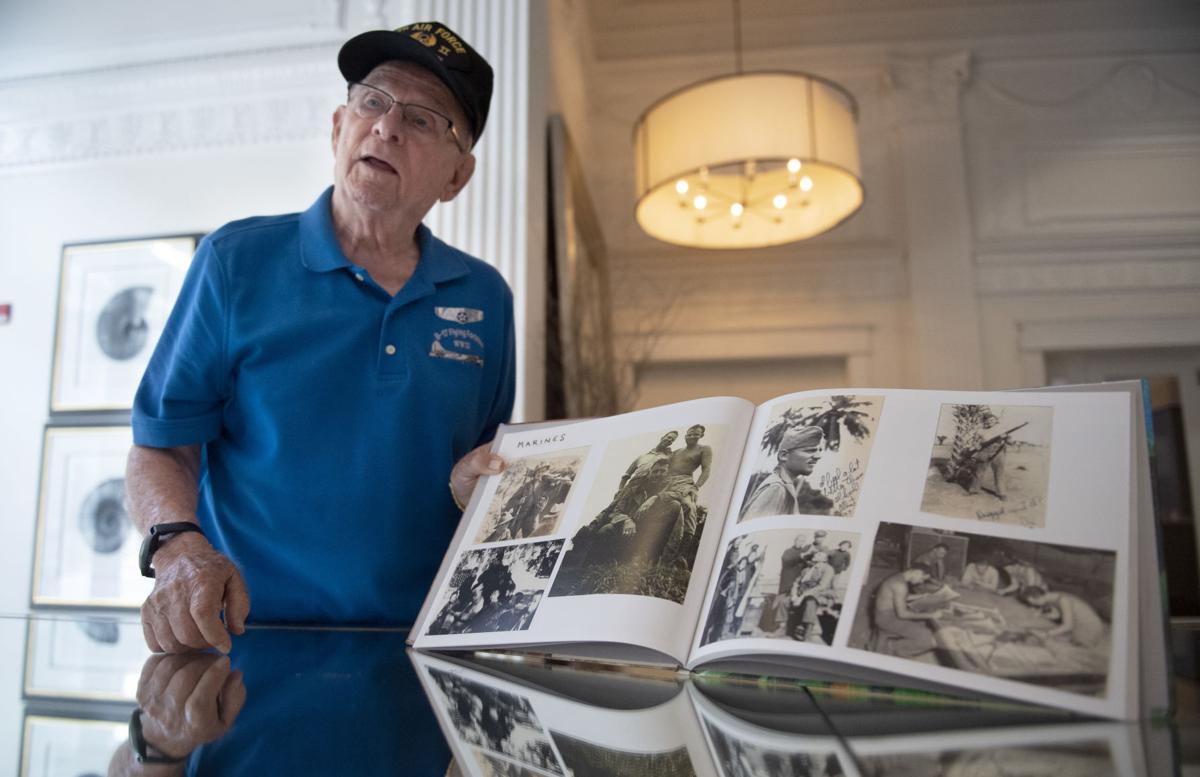 Melvin Hurwitz, who was a pilot in the Army during WWII, displays an album of family photos Friday afternoon. 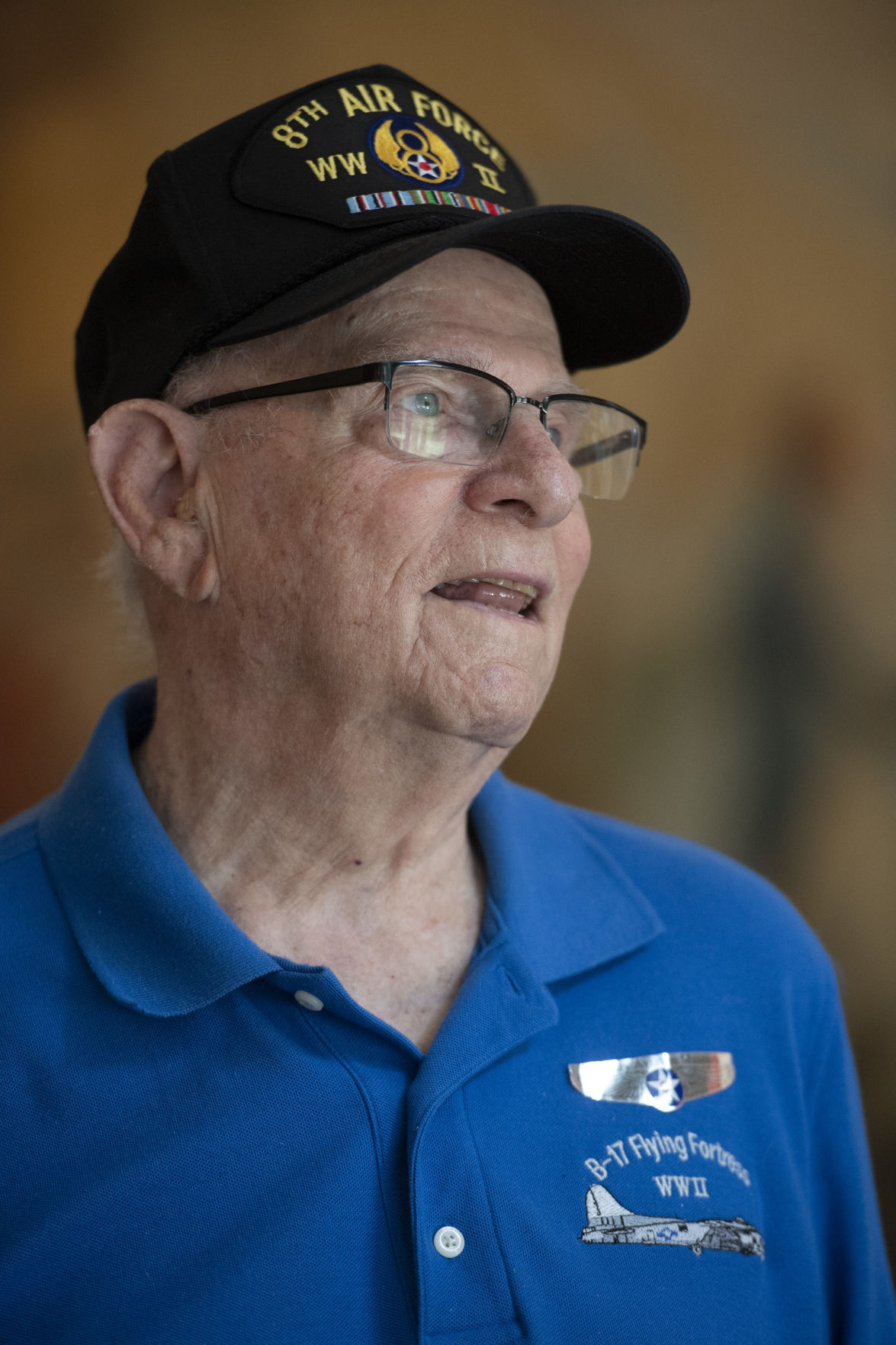 Melvin Hurwitz was a pilot in the Army during WWII. 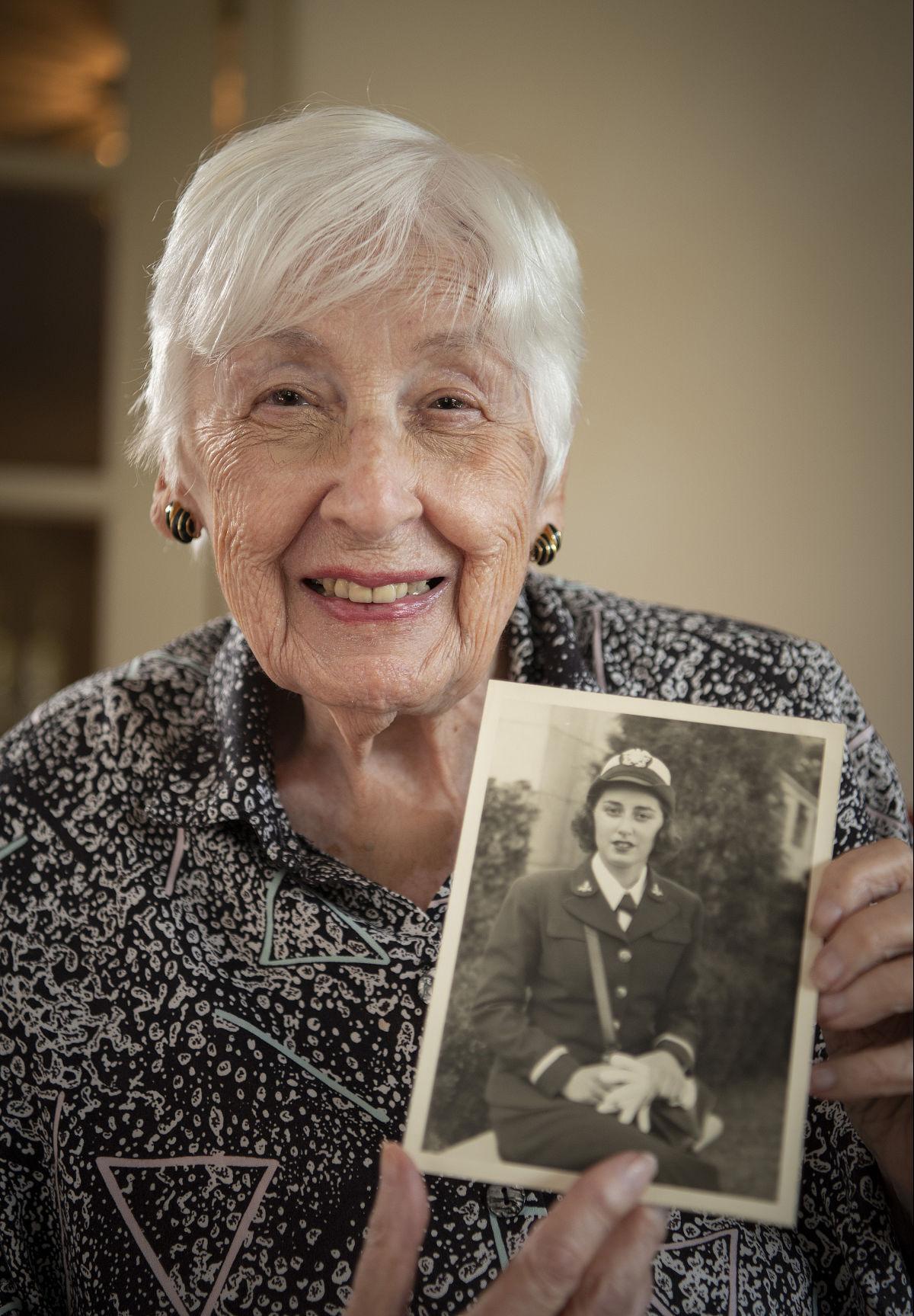 Inez Foley holds a photo of her in uniform while serving in the Navy during World War II. 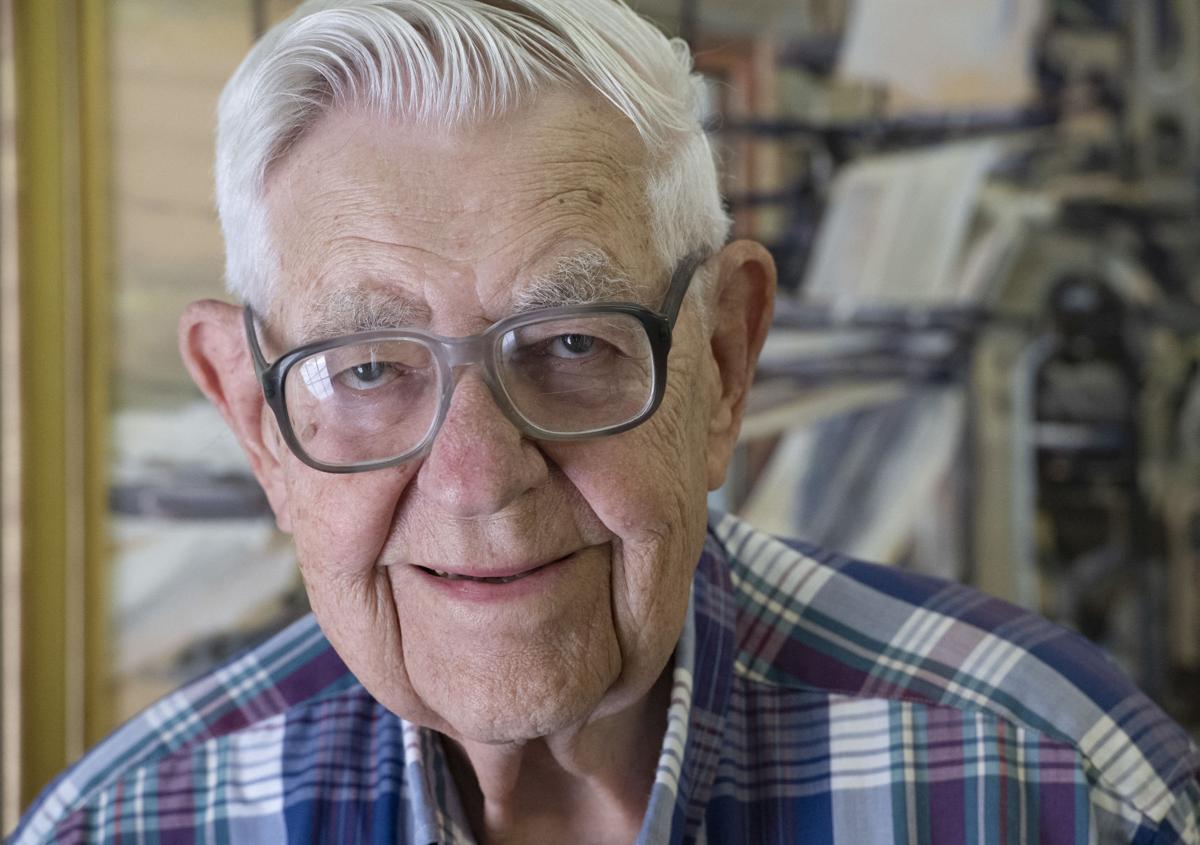 ABOVE: George B. Delaplaine Jr., shown in the downtown Frederick offices of the Delaplaine Foundation in 2019. RIGHT: Delaplaine as he appeared in the U.S. Navy. 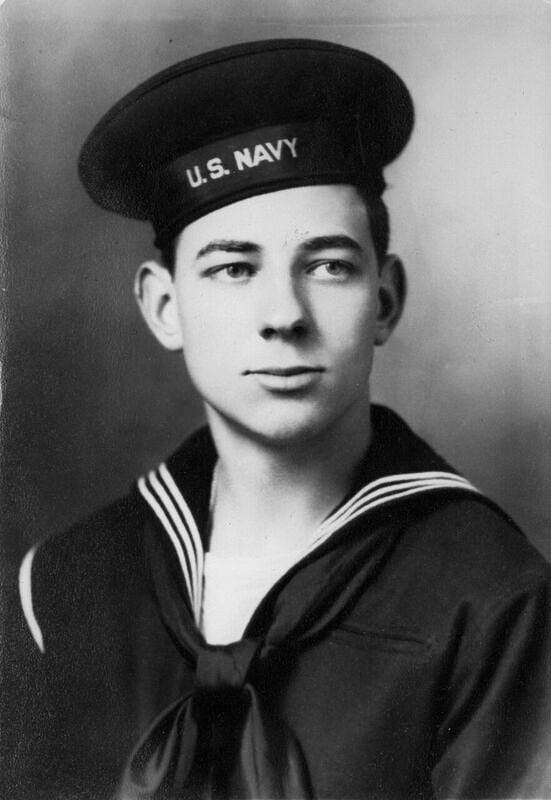 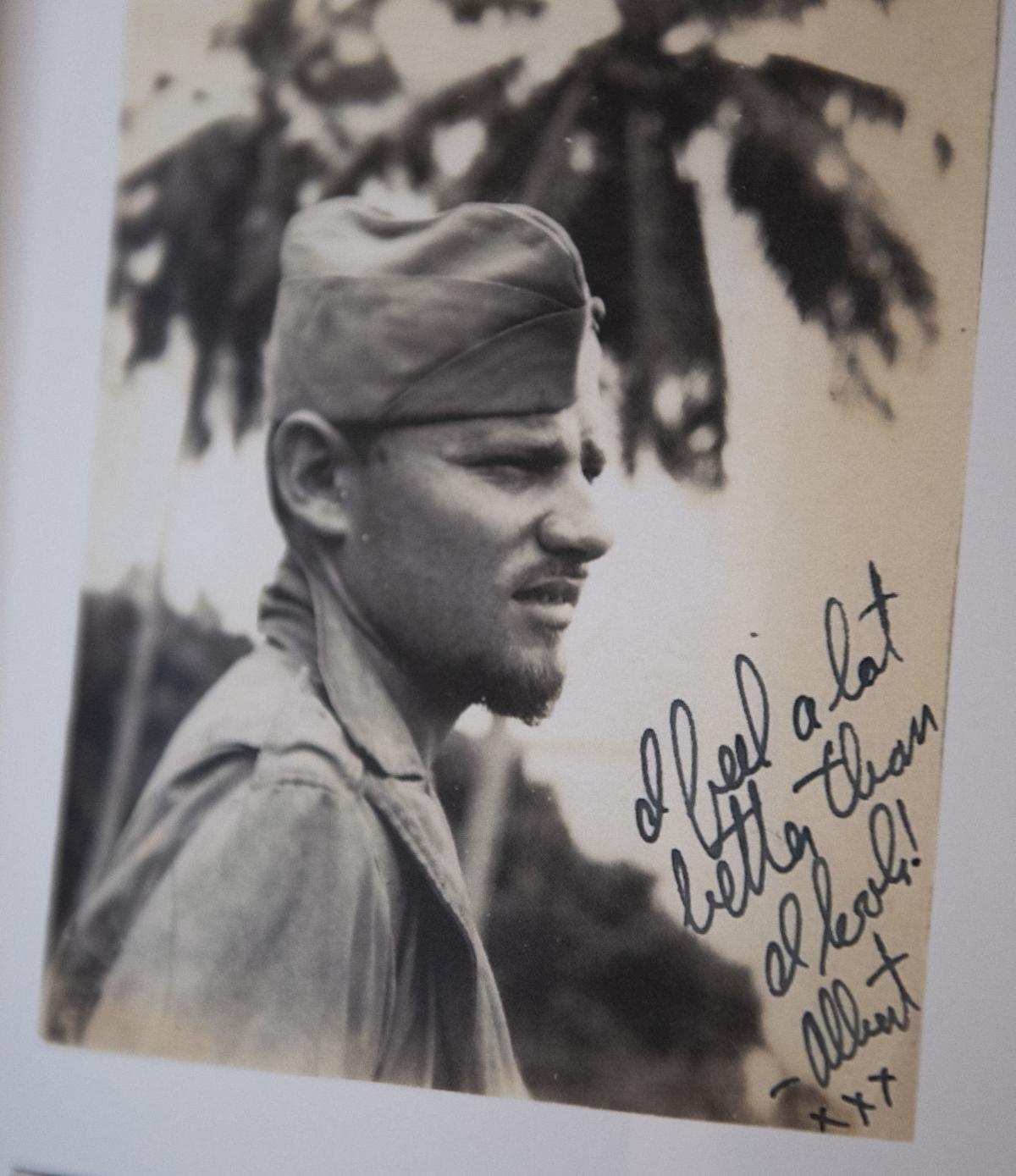 A photo of one of Hurwitz’s brothers, who also served during WWII.

Melvin Hurwitz, who was a pilot in the Army during WWII, displays an album of family photos Friday afternoon.

A photo of one of Hurwitz’s brothers, who also served during WWII.

Many might know Melvin Hurwitz for his ties to the family-owned Colonial Jewelers in downtown Frederick.

But more than seven decades ago, Hurwitz, 95, was serving as a radio gunner and operator on B-17 planes in the European theater during World War II. He remembers the joyous scenes around Europe after Germany surrendered in May 1945, and flying back to America.

The war wasn’t over, though. Eventually, Hurwitz was sent to Cannon Air Force Base near Clovis, New Mexico, to train on B-29 planes in preparation for deployment to Japan, where fighting was still occurring.

Then, however, the U.S. dropped atomic bombs on Hiroshima and Nagasaki in August. Days later, on Aug. 14 or 15 — depending on time zone differences — surrendered, effectively ending the war. Saturday marks 75 years since that latter date, known as Victory in Japan, or V-J Day.

Being on an air base near a remote town close to the Texas border, there weren’t the joyous scenes from Times Square or elsewhere. But Hurwitz and others on the base were still relieved.

“It’s finally over,” Hurwitz said of the mood around the Clovis base. “The world was going through hell for five years.”

When V-J Day occurred, Inez Foley wasn’t thinking much about the end of the war.

And even with her personal life, the job wasn’t done for Foley or others working in intelligence for the U.S. Navy. Some took to the streets and celebrated the end of the war, but Foley and others still had to report to work in Washington, D.C.

“It was of course quite a demonstrative day, lots of people walking around in the street,” Foley said. “I didn’t take part in any of that ... we still had our jobs to do, and it was a day to celebrate, but not everybody had the opportunity to celebrate it.”

Foley said her work was valuable during the war, but that others who celebrated in the streets that day probably had greater reason to do so.

“I think the people who felt it the most, probably were the mothers and wives of sons and husbands who had been in actual combat, and I never knew anything about actual combat,” Foley said.

George Delaplaine Jr., 93, was serving in the Navy and was at the Navy Pier in Chicago when Japan surrendered. He said the weather was nice, although still windy, as the Illinois metropolis always seemed to have a breeze running through it.

Chicago during WWII was a major interchange for those in the armed services, and when the war ended, he and others were given a three-day leave off the pier. As military police, it was their job to take those who had over imbibed, and transport them back to the pier to recover.

“When Japan was gone, the war was over, you could really get drunk,” Delaplaine said.

There were celebrations in the streets, especially downtown, but no formal parades, he added.

Much like Hurwitz, Delaplaine said it was a relief when Japan surrendered. Many soldiers in Chicago were in the process of coming back from fighting in Europe, and then were going to transfer to other bases nationwide before deploying to the Pacific theater to continue fighting in Japan.

Hurwitz said that appeared to be his fate before President Harry Truman decided to drop two atomic bombs on the island nation, helping end the war. He was thankful he and others who fought in the European theater wouldn’t have to endure more fighting in the Pacific.

“We went through hell in Europe and we thought we were done … but here we were, going to get ready for the next jump,” Hurwitz said.

After the war ended, Hurwitz didn’t have enough service time logged to be honorably discharged, so he was deployed to Camp Myles Standish in Taunton, Massachusetts, where he served until early 1946.

Historians now debate whether the bombings of Japan were just, but Americans weren’t debating it then, as it saved thousands of their lives.

“Whether it was the moral thing to do, everybody was talking about it,” Hurwitz said. “But 95 percent of the people at that time thought it was the right thing to do.”

It's unit 731 actually and the United States granted the "researchers" immunity from prosecu.tion in exchange for the information that was gained by the horrific experimentation. The U.S. granted immunity if the Japanese would not share this information with any other country.[ninja]

George and Melvin, part of the greatest generation. Thank you.

I thank all the anti fascists who bravely fought White Supremacists, in WW II and today.

Moral thing to do? BS! Japan attacked Pearl Harbor in a sneak attack. On Corregidor they were brutal to U.S. prisoners. They were brutal to all civilians in the Philippines and in China. On Guadalcanal they capturedand tortured our soldiers.

My uncle saw 168 days of front line combat, in Patton's 3rd Army tank Corp. Bastogne, Battle of the Bulge, Ardennes, across the Rhine into Germany. I have the letter he sent my father, as he waited to go to Japan.

Ease up, Dick. Your passion is noted but while the military (my dad was in the European theater, too) and the world was indeed rejoicing over having defeated fascism of the worst kind, the morality is a factor because so so many civilians died hundreds of thousands were wounded and many others suffered long term effects. I believe it ended the war sooner and that it ultimately saved American lives, but if there is not a moral question asked when such weapons of mass destruction are being contemplated then, then there is not a consideration of humanity. If there is not at least some moral struggle before such an act, or any act of war, then we will have lost our ability to look for other answers to resolve conflict.

And you think what the Germans did to the Jewish was okay? No war is moral, it is caused by tin horn dictators that want to control the world. I was told by other Marines some of the things done during the WWII by the Japanese and their populace worshipped Hirohito.

You missed my point, Dick. Where did I even intimate that I thought the genocide of the Jews was okay?

You want to be moral as someone is trying to kill you. I didn't miss your point, you missed mine. There's no such thing as morality in war.

Japan wasn't looking for other answers to resolve the conflict. They got just what they deserved.

The children and people who were terrified of the regime fearing of retribution for disloyalty that were incinerated got what they deserved? I am not advocating on the behalf of the evildoers in Japan, CD. There is new research that shows they may have been planning a surrender, on their terms.Of course we probably did not know that if it is true. So perhaps they may have been looking for other answers.

Exactly the way I feel, CD. It wasn't just simply loyalty to the Emperor, they went out of their way to kill civilians. So, we are supposed to feel sorry for their civilians, BS.

They had to be driven out of caves with flame throwers. How moral is that? You are simply arguing about the weapons and how they are used. Germany didn't worry about that. They bombed civilians, instead of military targets, part of the reason they lost the raids on England. Japanese soldiers took young women and nuns to make prostitutes out of them. I don't want to hear the silly argument about morality.

The Wheel apparently missed the part about U.S. fire bombing Tokyo and other major cities. That was worse than the atomic bomb. And Japanese generals were going to stop any surrender, it wasn't going to happen.

If you want to see what the Japanese were all about and why the greatest generation was right to bomb them into submission, google Unit 371 and come back here and tell us about morality.

And what were their supposed terms, Wheel? They didn’t deserve even a notion of negotiating. That empire was more savage than the Nazis.

Fire bombing during the war was far more destructive, deadly, and terrifying, according to what I’ve read and seen about the war. It was endless for those that endured it. They lived in constant fear of attack. People died perhaps more horribly in the fire storms and rubble than those in the nuclear attack. Both were horrible and I shake my head at the fact that all this suffering was enabled by a small handful of evil people. I don’t understand how people like Hitler, Stalin, Hirohito et al. come to be and how they get people to follow them. I’m not justifying the use of the bomb per se, because I think a big part of the decision to use them was simply because we could. There were lots of calculations that went into the final decision to use them, and like anything history doesn’t have the complete picture. But I think it’s certain that ultimately more lives were saved on both sides by using the bombs. But we’ll never know for sure.

Matt, you talk about all the Facist dictators, you left out wannabe Trump.