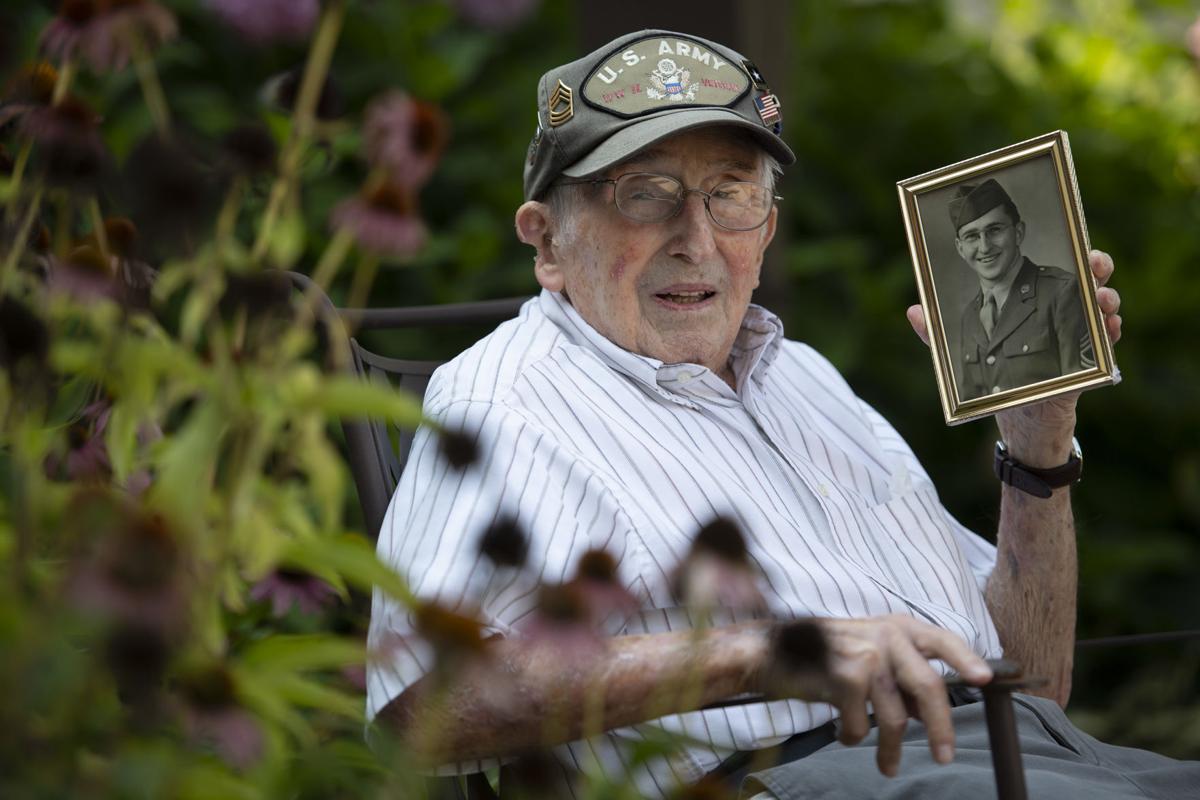 99-year-old David Guralnik displays a photograph of himself from his time serving in the Army during WWII. 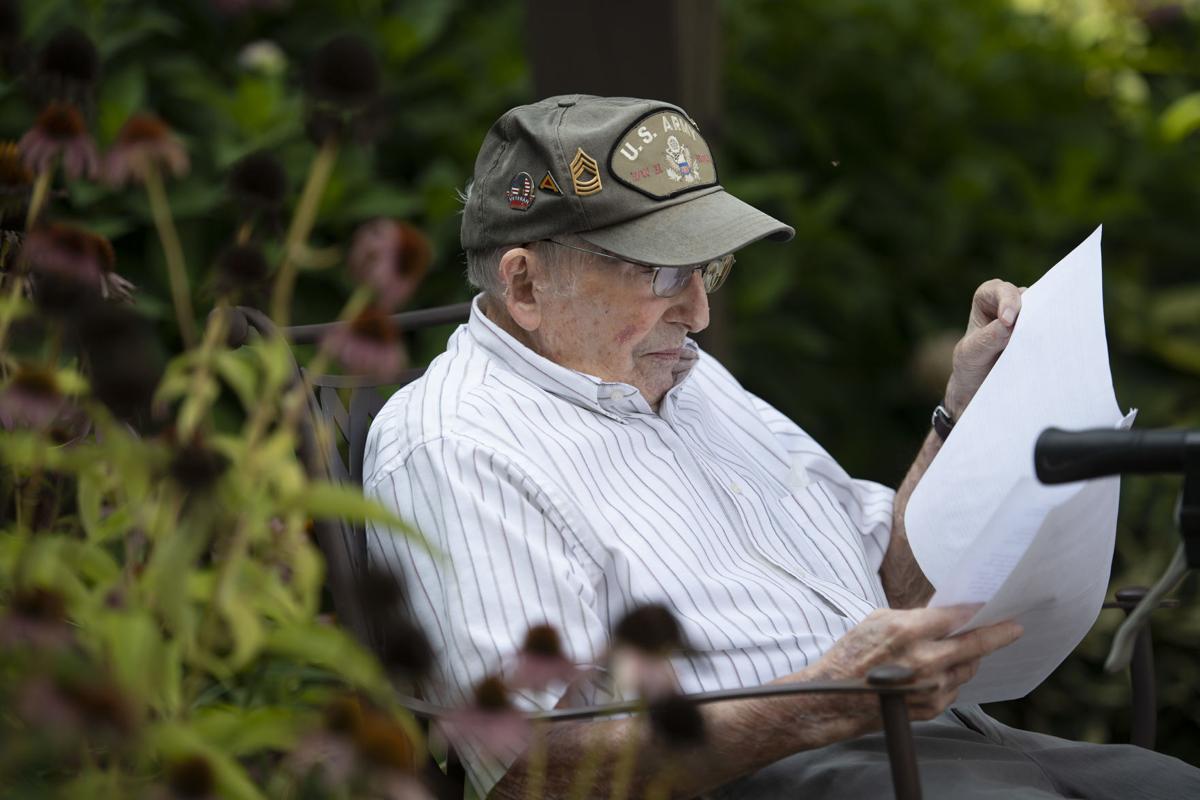 99-year-old David Guralnik reads through a history of his service during WWII from the patio at Country Meadows Retirement Communities. 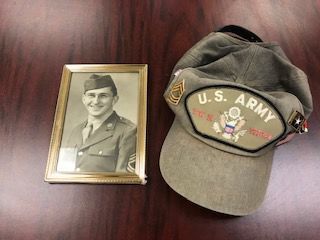 David Guralnik in uniform and his hat.

99-year-old David Guralnik displays a photograph of himself from his time serving in the Army during WWII.

99-year-old David Guralnik reads through a history of his service during WWII from the patio at Country Meadows Retirement Communities.

David Guralnik in uniform and his hat.

A little more than 75 years ago, David Guralnik was on a ship headed to Japan, preparing for a land invasion after spending years fighting for the U.S. Army in North Africa, France and Germany.

His service in World War II was already extensive, but Guralnik knew back then that heavy fighting still lay ahead. Thousands of U.S. warships were traveling to the island country, and U.S. forces controlled the air, but Japanese soldiers would not give up easily.

But then, the captain of the ship, the USS General George M. Randall, imparted some news in early August: the United States had dropped a "very powerful bomb on one of the bigger cities in Japan."

That bomb turned out to be the atomic bomb on Hiroshima. Three days later, the U.S. dropped a second bomb on Nagasaki. And then Japan surrendered, ending the fighting in World War II.

"Once they surrendered, we thought, hey, we’re getting to go home at last," Guralnik said. "Everybody was very, very happy and screaming and everything else."

Before Guralnik had been on that ship, he spent multiple years as a specialist with the Army's 142nd Ordnance Battalion, fixing parts for tanks and artillery. He said his training prior to the war at the Frankford Arsenal served him well during the war.

When he was 21, he and a bunch of friends were compelled to serve after seeing the scenes at Pearl Harbor in 1941. He then spent four years in the Army, and quickly rose to the rank of master sergeant because of his experience at Frankford, and also teaching others overseas on artillery and tank repair work.

Guralnik remembers being thankful when he knew the war was going to end, especially after being sent to fight in Japan after the fighting in Europe ended.

"Before we heard the dropping of this powerful bomb, I remember being with the group of other soldiers and wondering what’s going to happen," Guralnik said. "We made it over in Europe, we lucked out … luckily I made it, and several guys in my outfit made it … we were in several battles where we could have not [made it]."

"We just felt wonderful, we were going to get to go home in one piece," he said. "Even though it was many, many years ago, I can remember this like it was this morning."

Guralnik, now 99, lives in Country Meadows, a retirement community just southeast of Frederick. His daughter Betsy Maymon and other relatives visit when they can, due to the restrictions and regulations because of the coronavirus pandemic.

"I’m pretty proud of him, he's in his late 90s and he’s very active," Maymon said. "And he’s very sharp for his age … I’m very proud of his war stories, and his participation in the service."

Guralnik believes many more lives would have been lost if the United States had to invade Japan. After the bombs were dropped, he was deployed to the Philippines to find and attack any lingering presence of the Japanese Army there, before heading to Yokohama as the occupying Army.

The Japanese army was ruthless, and would have died fighting rather than surrender, he added.

After his time in Japan, he made it back to the United States, and remembered landing at Wilmington, California. He then went on to work for Veterans Affairs for several years.

"I just thanked God that I made it," he said about landing in California, adding, with a laugh: "I mean I got knocked around a little rolling in and out of tanks ... so I was thrilled I came out in one piece."

About two-and-a-half years ago, Guralnik realized something at Country Meadows: there might be enough veterans to form a group.

So he approached management, who quickly gave him the green light on the idea. Guralnik had been involved in multiple groups when he lived in New Jersey before moving to Maryland.

"I know what to do, I know who to talk to," Guralnik said of how he pitched the idea. "I said, 'What I need from you is a list of all the veterans and their phone numbers … they all said, 'Absolutely!" and they loved it."

Staff at Country Meadows said they already had two luncheons for veterans each year, but that Guralnik expanded that idea, hosting three a year and scheduling a special speaker for each one, before the coronavirus pandemic brought that to a halt.

"Dave is a very personable man, and for each luncheon Dave created the agenda, secured the speaker, and ran the show with minimal help from the staff at Country Meadows," according to a statement from staff.

Debbie Savageau, director of marketing at Country Meadows, said it's nice to see Guralnik's efforts in coordinating the events.

"To see all of these wonderful men and women, (some of whom truly struggle to stand), stand and salute their flag and their fallen comrades during the playing of taps, brings tears to many of our eyes who have the privilege of being a part of these lunches," Savageau wrote in an email.

Guralnik estimates there were around 30-40 veterans in the group when he started. Some have died, while some have been added on, but he's thankful for their participation and for their conversation.

When he looks back on his service, there's one fact he thinks is unique—and a result of his work repairing tanks and artillery throughout North Africa and Europe.

"We were one of the very, very few outfits that both had served a lot in Europe and then in the east in the Pacific," Guralnik said. "There are not many soldiers that served in World War II that served in both places."

Late 1942-1945: Starts service in Aberdeen, then goes to Camp Santa Anita In California, and then joins 142nd Ordinance Battalion in Texarkana, Texas. After traveling throughout the states, eventually arrives in Oran, North Africa to support Gen. George Patton's group.

After spending time there, he was sent to Marseille, France. Continued on to Langres, France.

May 7, 1945: Guralnik learns Germany surrenders, ending the fighting in Europe.

May 31, 1945: Guralnik returns to Marseille after receiving orders for more duty in the Pacific

Aug. 6, 1945: Guralnik, approaching Japan, learns that a very powerful bomb had been dropped on a large Japanese city. This turned out to be the atomic bomb on Hiroshima.

Aug. 26, 1945: Guralnik's ship is sent to the Philippines to see if any lingering Japanese soldiers remained.

November-December 1945: Spent time in Yokohama and Tokyo as part of the occupying Army

Thank you Mr. Guralnik for all you have done. American honors your service. I admire your tenacity to put together a veterans group. Such a great idea!

Thank you and all your cohorts for your service, for what you did for our country and for the world. I'm sorry we seem to be letting you down these days but don't think for a minute your sacrifice has gone unappreciated by most of us who are here and free now because of what you did then.

We do seem to have a Natzee (mispelled on purpose) problem that we can't seem to shake.

We used to stand up to authoritarians. Now, they seem to be very fine people.

There's a reason why these vets are referred to as "The Greatest Generation," because they are!!!

Thank you for your service! You might have been with my Uncle John who was in Patton's 3rd Army tank Corp. John went through the battle to save Bastogne, Battle of the Bulge,through the Ardennes and into the Rhineland. 168 days of front line combat.

At the end of the war he was in California, waiting to be shipped to Japan.

Thank God for the atomic bomb!

Did I tell you about my Uncle Bob?