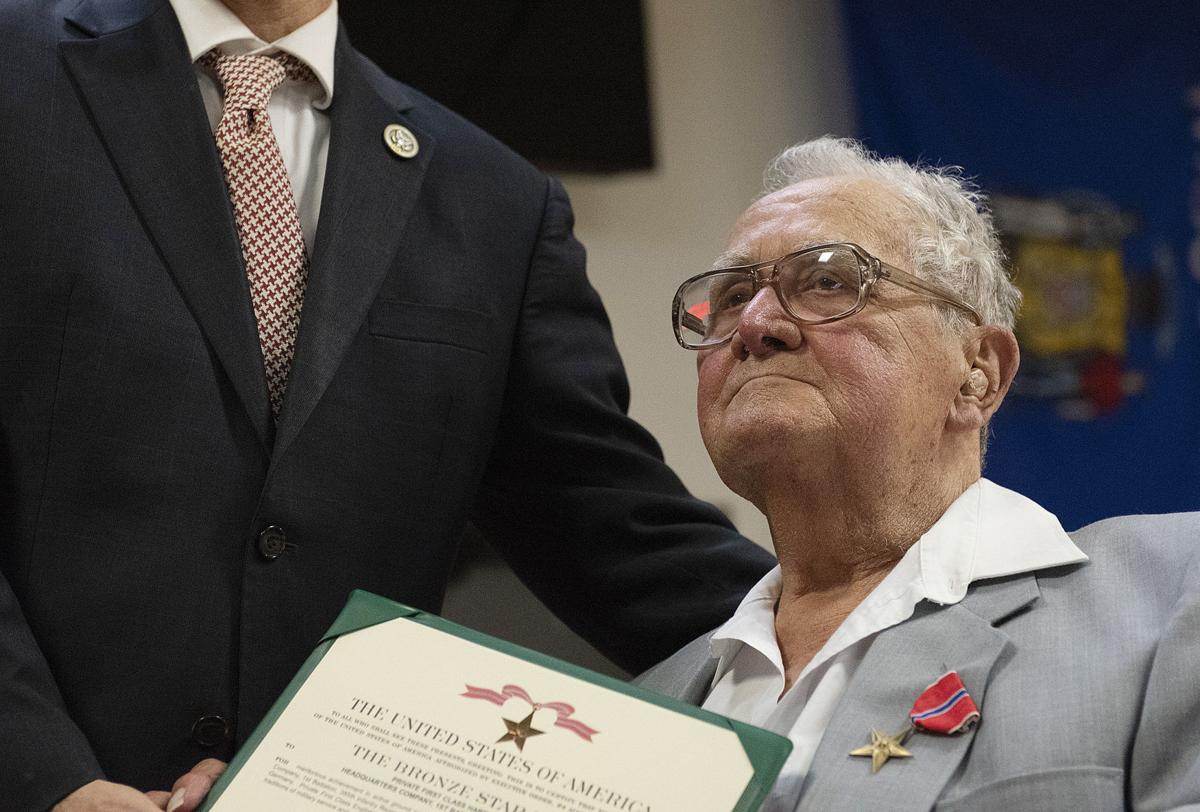 Harry “Bud” English sits in front of a small crowd after U.S. Rep. Jamie Raskin pinned the Bronze Star on him for his service in the Army during World War II. The ceremony took place Friday at the Thurmont AMVETS. 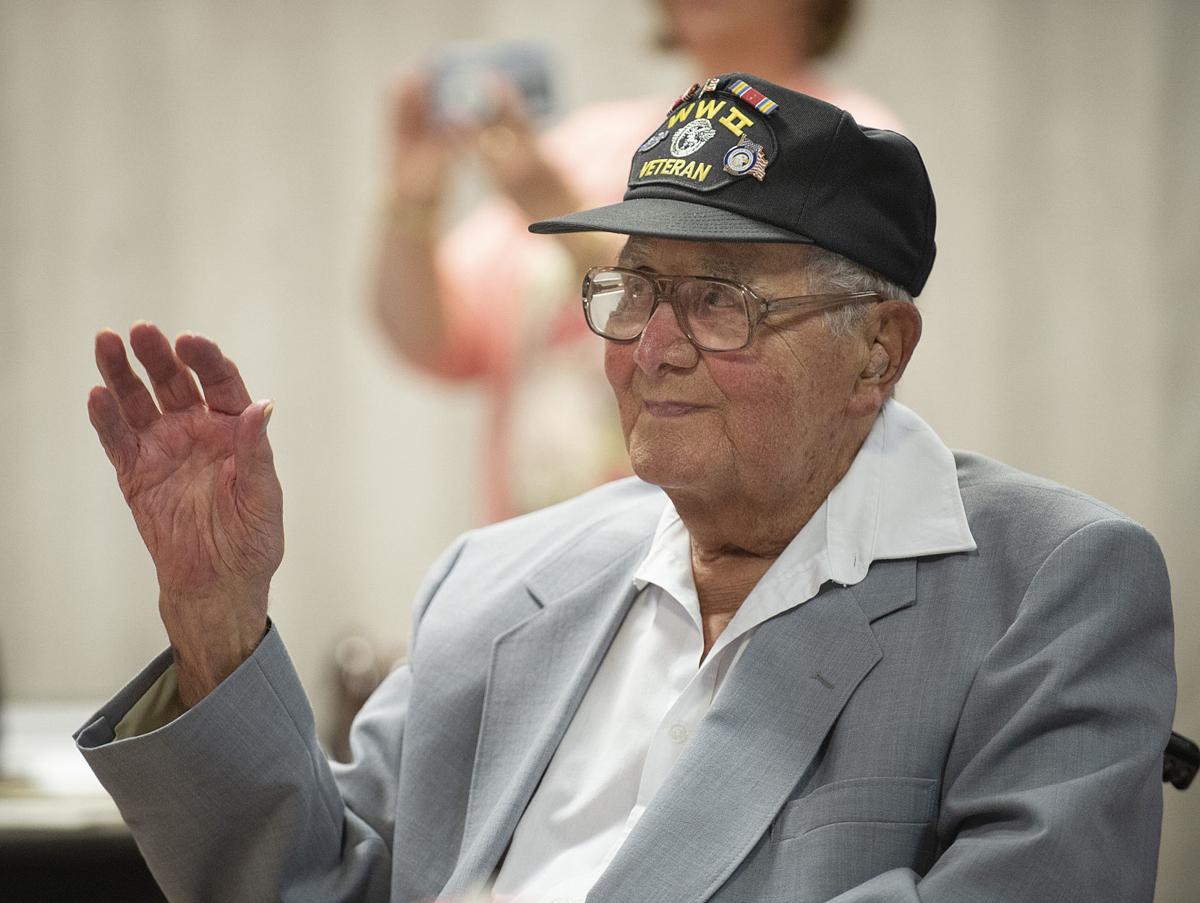 Harry "Bud" English waves to those gathered Friday afternoon to see him receive the Bronze Star for his service in the U.S. Army during World War II. 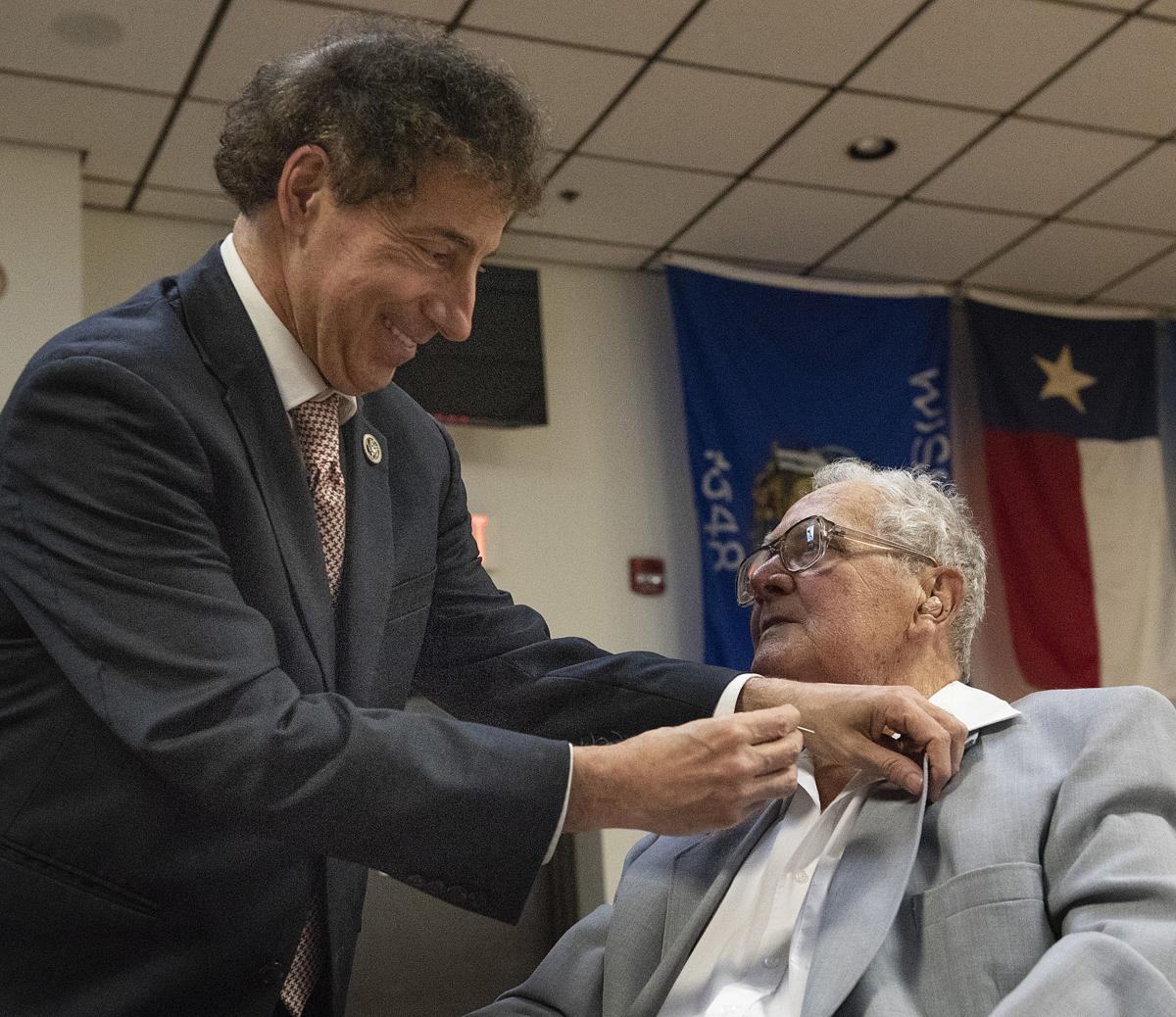 U.S. Rep. Jamie Raskin pins the Bronze Star on Harry “Bud” English for his service in the Army during World War II. The ceremony was held Friday at the Thurmont AMVETS.

Harry “Bud” English sits in front of a small crowd after U.S. Rep. Jamie Raskin pinned the Bronze Star on him for his service in the Army during World War II. The ceremony took place Friday at the Thurmont AMVETS.

Harry "Bud" English waves to those gathered Friday afternoon to see him receive the Bronze Star for his service in the U.S. Army during World War II.

U.S. Rep. Jamie Raskin pins the Bronze Star on Harry “Bud” English for his service in the Army during World War II. The ceremony was held Friday at the Thurmont AMVETS.

“They told me any excitement could kill me, that I could never serve,” English recalled Friday.

The eager 17-year-old’s subsequent attempts to enlist in the Navy, the Army, and “even” the Coast Guard were turned down for the same reason. Dejected, English resigned himself to returning to high school and finding a job.

Then, a letter came. He was drafted into the Army, and quickly found himself en route to South Carolina, where he would go through 16 weeks of training to serve as a driver for Army intelligence.

And though he saw no shortage of excitement in his subsequent two years of service, including on the front lines at the Battle of the Bulge during the final German offensive, his heart kept beating. That same heart took him through three decades of railroad work, marriage, children, retirement and, at the age of 92, to receive his long-awaited Bronze Star Medal.

Seated in a wheelchair Friday in the Thurmont AMVETS, English gazed down at the medal Maryland U.S. Rep. Jamie Raskin (D-8th) had pinned to his gray sport coat just moments before as family, friends and fellow veterans applauded. Though English was discharged, he never received the Bronze Star he qualified for, having previously received a Combat Infantryman Badge (CIB) for “exemplary conduct in ground combat against an armed enemy” during WWII.

Keith Midberry, veterans’ liaison for Hospice of Frederick County where English is a client, knew about the 1947 policy that enabled the retroactive granting of Bronze Stars to eligible WWII veterans from his own father, who is also a WWII veteran. Midberry contacted Raskin, eager to give English a long-overdue honor he knew would be deeply appreciated.

“He wears his [service] hat everywhere,” Midberry said of English.

Hailed as a hero by Raskin and county officials who presented their own commendations, English was quick to shift the focus away from himself. He credited his granddaughter and her family for taking care of him in their Sabillasville home, laughing as he described how his great-grandson Ben Seiss picks him up when he falls “like a sack of potatoes.”

English’s tone grew serious as he noted, “The real heroes never came home. They gave everything. I just did what I could.”

His country upbringing proved useful in his service. Unlike his fellow infantrymen, most of whom came from urban New York, he knew how to drive, and was quickly assigned to one of the Army jeeps, he said.

Once overseas, initially in England before moving through France and into Germany, he turned meager rations of raw potatoes into a bona fide breakfast for his unit, packing dirt and the potatoes into his steel helmet and cooking them with gas.

Other memories from his service were darker, more haunting. English recalled the “bing” sound of the vertical wire cutters rigged up on his jeep to cut through the traps German forces had set up to injure soldiers as they drove in uncovered jeeps under the cover of night.

Though his primary duty was to drive to the front lines after nightfall, chauffeuring soldiers with telephone lines they would set up to send military communications, he saw combat, too.

“It was either shoot them or they shoot you,” English said.

He never suffered from severe post-traumatic stress disorder, but once stateside, he found loud noises alarming. The sound of shells falling at a Fourth of July fireworks show in D.C., for example, was too much for him.

He also returned with an affinity for the potato whiskey he drank while stationed in Germany, where he remained even after the war ended to drive military officers to and from the Nuremberg trials.

The first time he tried the 190-proof liquor, he carefully measured an ounce or two into a large glass of Coke.

“By the end, it got so I could drink a lot of whiskey with a little Coke,” he said.

His drinking days ended abruptly after he met his wife, Lois. Spying her coming off the roller rink in Hagerstown, he gathered his nerves and asked her out. When she told him she would not go out with someone who drank, he stopped.

The pair were married just a few months later, a relationship that continued through his years working first in his father’s restaurant and later, because he craved a job outdoors, for the Western Maryland Railroad. The labor-intensive work has made it hard for him to use his legs much now, he said from his wheelchair.

And though he can no longer drive, he still enjoys hitting the road with his great-grandson for a trip to Outback Steakhouse.

A great story. I'm glad he's had such a long life and is able to spend time with family.

Mind over matter that was displayed all his life. Congratulations Mr. English and thank you for your service to our Country.

Agreed. This country owes you a debt that can never be repaid. You are the greatest generation indeed.

Thank God we had men like him
Congratulations on the Bronze Star.