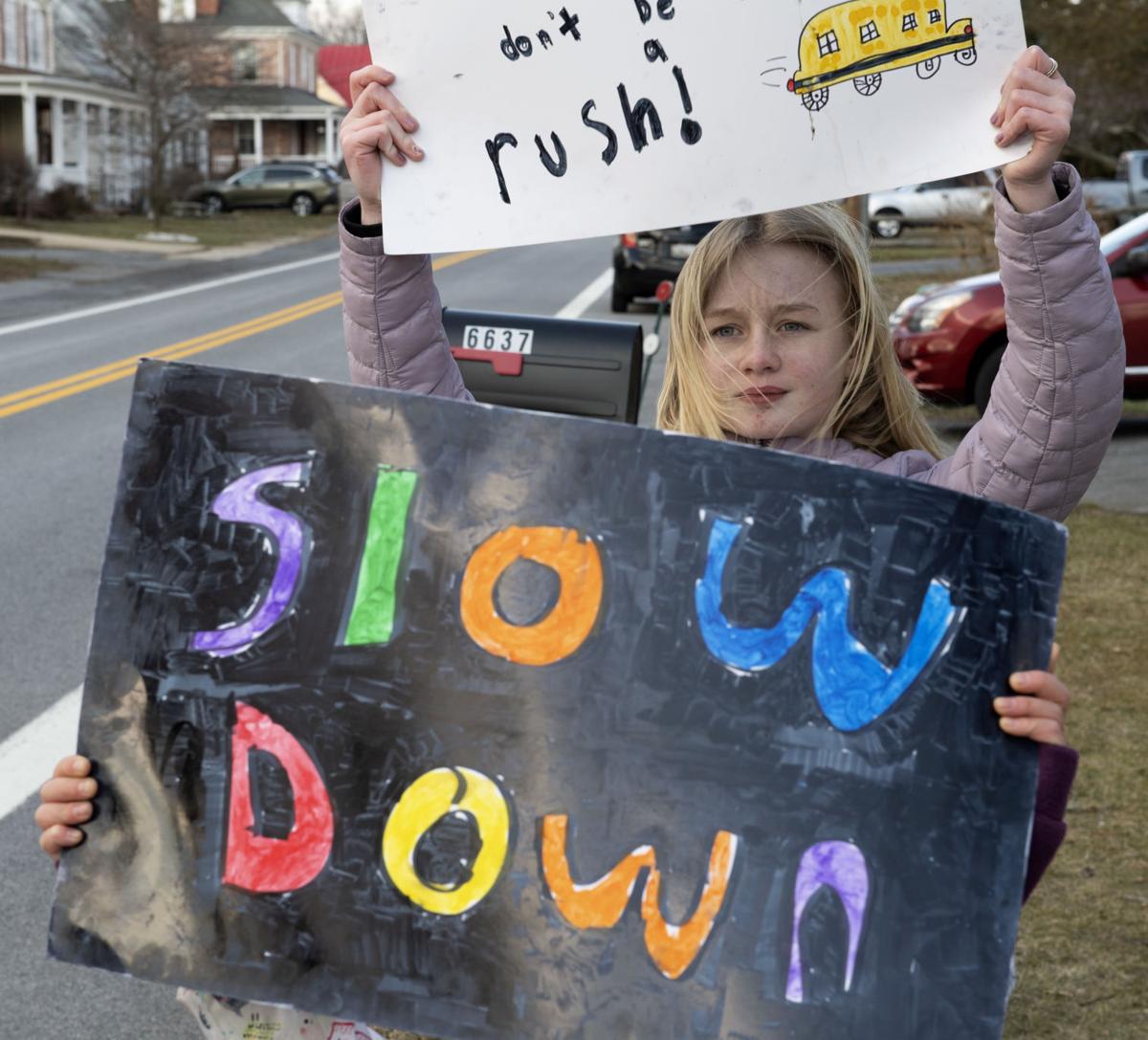 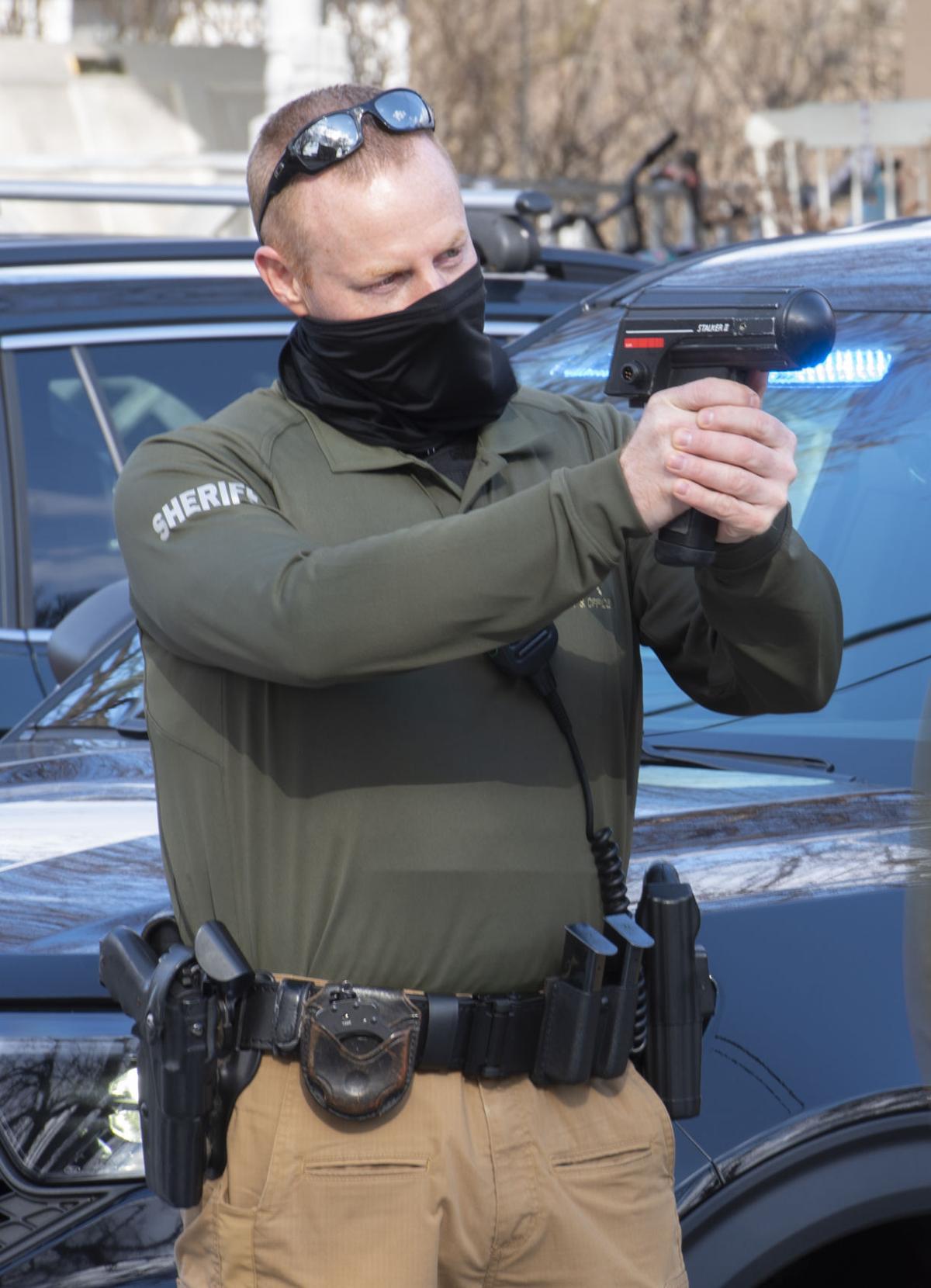 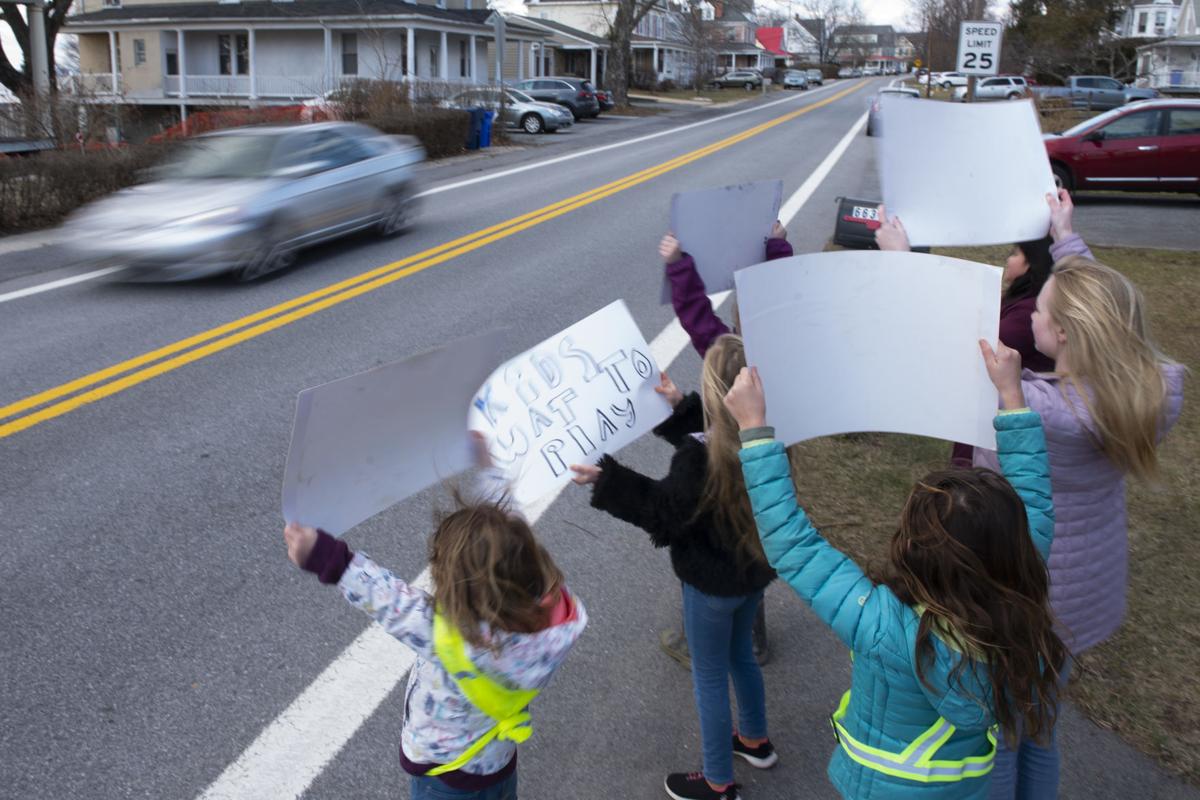 A group of children wave signs imploring motorists to slow down while driving through their neighborhood in Braddock Heights Thursday afternoon.

Signs bent in the wind. About eight girls dashed back from the side of the road to take a break and play. They climbed a tree, swung from ropes and flew past on a small zipline. Nearby, a Frederick County Sheriff's Office vehicle and deputies, armed with a handheld radar, sat waiting for vehicles.

They were all there to send a message: Slow down.

Ten-year-old Claire Heritage wants to be able to walk to her friend's home, a few houses down the road, without vehicles whizzing by well over the 25 mph speed limit. Her mother, Carrie Heritage, says speeding has been a problem in the community for years.

"We want to be able to play outside ... and not be worried of speeding cars," Claire said.

Her mother is one in a long line of community members who she said have been trying to address the speeding problem on Jefferson Boulevard, particularly in the 6600 and 6700 blocks. Heritage has welcomed a group of neighborhood children to her front yard to safely encourage passersby to hit the brakes.

"We can't let them walk to each others' houses without safety belts" or a parent, Heritage said. She's seen cars traveling double the speed limit, despite the signs and clear markings on the road.

This problem isn't new. Heritage has lived in Braddock Heights 11 years and said speeding has been an issue since before she moved to the area. She recently had a meeting with Frederick County Sheriff Chuck Jenkins, who sent deputies to the neighborhood for extra traffic enforcement.

Deputy First Class Nathan Rector said they've had deputies out there 50 times in the past three weeks. He's been with the sheriff's office 16 years, 10 of which have been focused on traffic. He estimated roughly half of the cars he sees on that stretch in Jefferson Boulevard are moving at least 10 miles over the limit.

"We could write tickets up here until we're blue in the face," Rector said.

They ramp up police presence when residents call with concerns, he said, but they can't be there all the time. Typically, Rector said they'll prioritize the area for some time, the speeding problems die down, then they start back up again. Right now, Jefferson Boulevard in Braddock Heights is listed as "important" in the deputies' database, and 17 different deputies have come to patrol in recent weeks, he said.

"You wouldn't want someone flying past your kids in your front yard," Rector said.

Rector and the sheriff's office are trying to raise awareness about the issue and encourage drivers to take the speed limit seriously — even when police aren't there. On Thursday, he filmed a public service announcement the sheriff's office plans to push out on social media, spokesman Todd Wivell said.

The sheriff requested the county install a speed survey unit in the area, which tracks vehicle speed, the number of vehicles and times a vehicle passes, Rector said. It does not track vehicles' identifying information. The sheriff is also seeking to install signage to inform drivers there are residents who are deaf in the area.

Heritage said she's brought her concerns and suggestions to County Councilman Jerry Donald (D), who represents Braddock Heights, and has spoken to county transportation department officials, as it is a county road. She said there's a local committee of Braddock Heights community members who are seeking to improve the traffic situation.

While she applauded the sheriff's office's efforts, she suspects a permanent solution will require a change in the physical road — like speed bumps — or a shift in the drivers' attitudes.

"I feel like we have to change the culture," she said.

Rector encouraged pedestrians and bicyclists to also take precautions by walking on the proper side and avoiding the middle of the road. Those with concerns about speeding or other issues can use the sheriff's office's online reporting system, frederickcosheriff.com/online-reporting. For emergencies, dial 911.

That photo at the top of the girl with four arms is amazing.. It isn’t often that one sees an actual photo of a Hindu goddess. Abrahamic religions, it is time to put up or shut up.

Maybe it would be better for these concerned parents to teach their little darlings to not play in the street, not walk in the street, which WAY to walk along a street ir road if ever necessary to do so, and to not stand waving distracting signs within inches of cars “whizzing by”. Like maybe teach them to play in the back yard or the side yards, rather than in a “front yard” that most of those older homes do my even have. But noooo, that would make too much sense. Rather, let’s turn all the kids into protesters when they’re as young as possible.

My thoughts exactly and if I'm not mistaken, isn't that spot at the top of a hill?

Lovely homes on a busy street. Saw that years ago. Time changes some things but not that.

As the temps rise and the exhaust warriors return downtown, I always anticipate someone not looking up from their phone or heeding the "Do Not Walk" sign at a crosswalk. Nothing will stop folks taking their aggression out on their gas pedal for some "attention" cruising Market St. City could use an increase in patrols/presence seeing as bar traffic has increased and will continue with warm weather and the return of the parklets. We had a drunk driver fly the wrong way down a side street and hit 3 parked cars before driving away last fall. Thankfully they didn't kill anyone.

Always a good idea to be reminded to slow down, pay attention and not take another life or your own.

Not a smart idea to have kids standing on the side of road, if speeders are a problem. You got your coverage and sheriffs office is responding, now move kids back inside and safe.

Exactly what I was thinking. You're also risking someone trying to kidnap them when they're that close to the roadway.